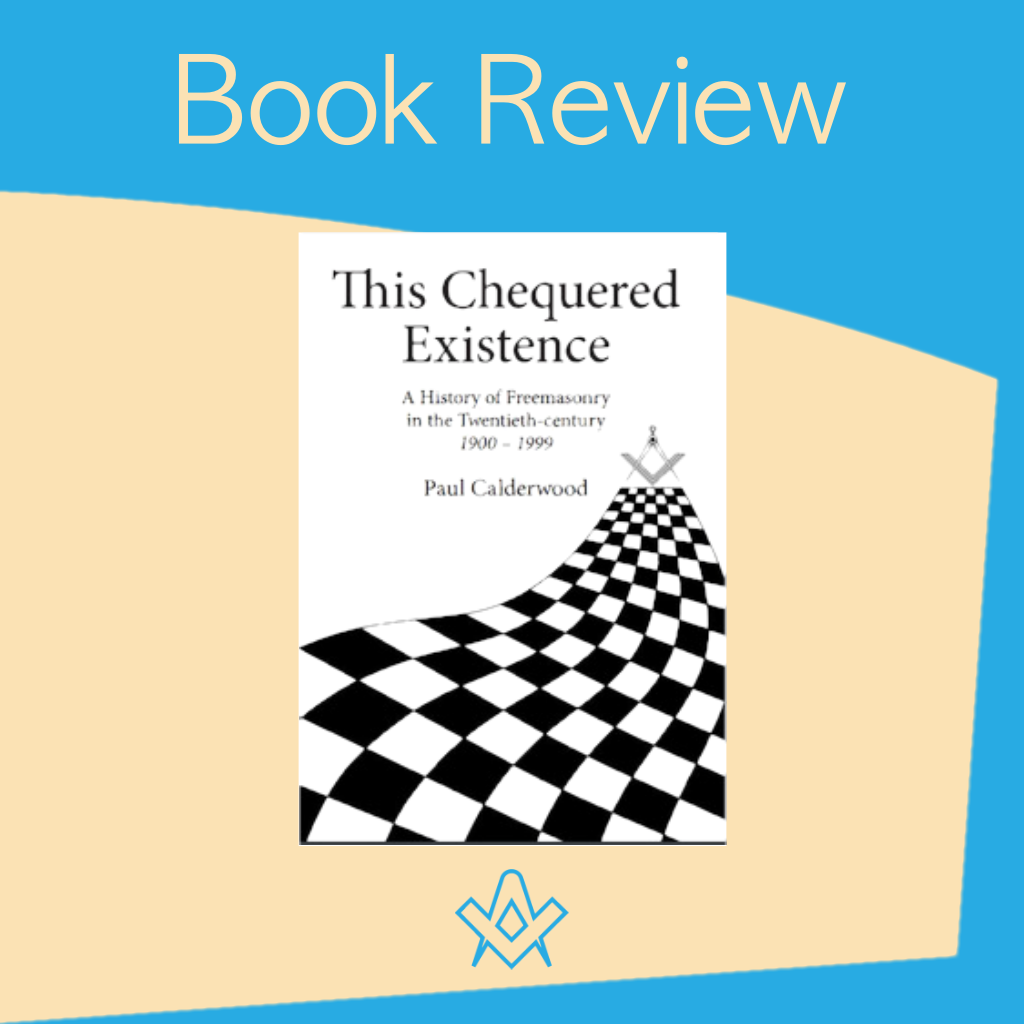 A History of Freemasonry in the Twentieth-century 1900-1999

The author of This Chequered Existence, Paul Calderwood, is a gentleman, freemason and scholar. Whilst without embossment, this book surely carries the imprimatur of the United Grand Lodge of England (UGLE).

The term ‘Chequered’ may raise hopes of ‘warts and all’ but highs and lows are covered with equanimous equipoise. Whilst researched and compiled with consummate academic rigor, the text is highly digestible and will be enjoyed by everyone with an interest in UGLE’s journey through the previous century.

Based on an accumulation of substantial data, each chapter traces a major theme including:-  Royal endorsement, buildings, politics, religion, charity, and negative perceptions of Freemasonry.

Chapter 7, ‘The Political World’, is a fascinating broad canvas making clear that whilst ‘politics’ in a lodge is forbidden, that ban does not, and cannot, apply to Grand Lodge or The Board of General Purposes.

Expansion on what is covered could fill volumes yet, the Author’s conclusions drawn from the data are initial and thereby allow readers great scope to draw alternative conclusions.

Chapter 1, ‘Membership rise and fall’, seeks to provide a masonic sociology indicating that Freemasonry is for anyone with disposable income and facilitates social and economic mobility for those who look, sound and act the masonic part – regardless of educational background.

Chapter 2, ‘New Buildings’, provides much data but perhaps might have dilated on Freemasons Hall Great Queen Street, the Royal Masonic Hospital and others. These were completed in the 1930s in ‘Modernist’ style (from 1960s called Art Deco) which made bold statements of modernity and secularism; an appropriate masonic celebration of pure geometry, in contrast to the ecclesiastical gloom of gothic.

The chapters are well supported with a series of Appendices the first of which is a substantial list of prominent people in the public domain, whose masonic membership had been referenced in the national press.

Again data-packed, the other appendices expand on building usage and particular aspects of religion and charity.

However, for this reviewer, Freemasonry and religion are as tectonic plates in continuous collision.

It would have been helpful to:

(i) have light on the apparent oxymoron of ‘Regular’ Freemasonry being secular yet demanding belief in a personal, intercessory, deity;

(ii), light on why during the 20th Century, belief in TGAOTU was superseded by first ‘The’ then ‘a’ Supreme Being;

(iii), why the Landmark of ‘the immortality of the soul’ was dropped without explanation?

Regardless of Freemasonry being a religion, or not, it may well be perceived by religious leaders as competition for time, mind and money.

Claims that Freemasonry can make religious people better practitioners of their religion is anathema to religious leaders and it is not entirely clear from This Chequered Existence if Freemasonry is, in whole or part, claiming to be doing ‘God’s work’.

Seemingly, Freemasonry is only for ‘People of Faith’, as Chapter 4 is titled; yet not every atheist is either stupid and/or libertine: what could be unworthy about agnostically, not knowing?

This Chequered Existence is a must for every mason with an interest in the Twentieth-century masonic journey.

Any masons without such interest are recommended to give this book a try and likely will be pleasantly impressed, it abounds with really fascinating data.

It is not the last word and wouldn’t claim to be; rather, it is a most firm foundation for making sense of how we got to where we are; and, that by freeing ourselves from the mistakes of the past, we might build a masonic Twenty-first Century. 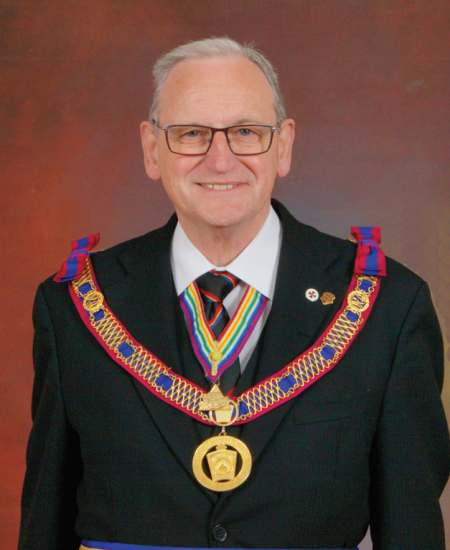 V.W.Bro Dr. Paul Richard Calderwood PGSwdB is a specialist in this period of history, having been awarded the Degree of Doctor of Philosophy by Goldsmiths, University of London, for his thesis on the history of Freemasonry in the twentieth-century.

For his essay on Freemasonry and Architecture in twentieth-century Britain he was awarded the Norman B. Spencer Prize in 2010, by Quatuor Coronati Lodge No 2076, the premier lodge of Masonic research.

Now a full member of that Lodge, he served for three years as its Secretary. Since 2017 he has been the Secretary of the Editorial Committee of QC and its Book Reviews Editor.

Appointed by UGLE as the Prestonian Lecturer for 2013, he is the author of Freemasonry and the Press in the twentieth century.

He has also contributed sections within a number of other books including The Treasures of English Freemasonry as well as Reflections on 300 Years of Freemasonry. A former journalist, Dr

Calderwood’s articles have appeared widely in a range of international journals.

This book is for anyone that wants to deal with the real facts and figures regarding the trends in the recent history of Freemasonry in England and Wales Although much has been written about Freemasonry hardly anything as substantial or so comprehensive as this study has been published previously to describe the history of the organisation’s development during the 20th-century.

This is all the more surprising since that century witnessed the greatest growth in the organisation’s history which extends over more than 300 years.

It was the century in which Freemasonry became ‘a mass movement’ drawing into its ranks much larger numbers of people than ever before and significantly re-shaping its social composition.

Although Freemasonry entered the 20th-century in Britain as a respected organisation, heavily patronised by royalty, praised by church leaders and well represented in government, it was by the end of the century on the defensive and facing a chorus of criticism and suspicion from parliament, the churches and the press, and endorsed in public by few.

The book examines the remarkable expansion of this significant organisation during this period, its royal connections and its role as a major force for good in the charitable sector. It also addresses important changes in its relationship with religious bodies and the media.

This book therefore attempts to trace the path of Freemasonry as it journeyed Highlights: There are many common theories about the rise and fall of Masonic membership and number of lodges in the twentieth-century.

This is the first volume to give the facts and figures displayed in easy to understand graphs and diagrams. Discover notable past and present Freemasons from lords and politicians, to priests and archbishops. See the focus of Masonic charity with details of the contributions lodges made to churches, charities and good

Freemasonry and the Press in the twentieth century

By the end of the twentieth century, Freemasonry had acquired an unsavoury reputation as a secretive network of wealthy men looking out for each others’ interests.

The popular view is of an organisation that, if not actually corrupt, is certainly viewed with deep mistrust by the press and wider society.

Yet, as this book makes clear, this view contrasts sharply with the situation at the beginning of the century when the public’s perception of Freemasonry in Britain was much more benevolent, with numerous establishment figures (including monarchs, government ministers, archbishops and civic worthies) enthusiastically recommending Freemasonry as the key to model citizenship.

Focusing particularly on the role of the press, this book investigates the transformation of the image of Freemasonry in Britain from respectability to suspicion.

It describes how the media projected a positive message of the organisation for almost forty years, based on a mass of news emanating from the organisation itself, before a change in public regard occurred during the later twentieth-century.

This change in the public mood, the book argues, was due primarily to Masonic withdrawal from the public sphere and a disengagement with the press.

Through an examination of the subject of Freemasonry and the British press, a number of related social trends are addressed, including the decline of deference, the erosion of privacy, greater competition in the media, the emergence of more aggressive and investigative journalism, the consequences of media isolation and the rise of professional Public Relations.

The book also illuminates the organisation’s collisions with nationalism, communism, and state welfare provision. As such, the study is illuminating not only for students of Freemasonry, but those with an interest in the wider social history of modern Britain.

The Treasures of English Freemasonry 1717 – 2017 Hardcover

A true collector’s item, The Treasures of English Freemasonry 1717-2017 is a beautiful and unique publication produced in conjunction with the Library and Museum of Freemasonry.