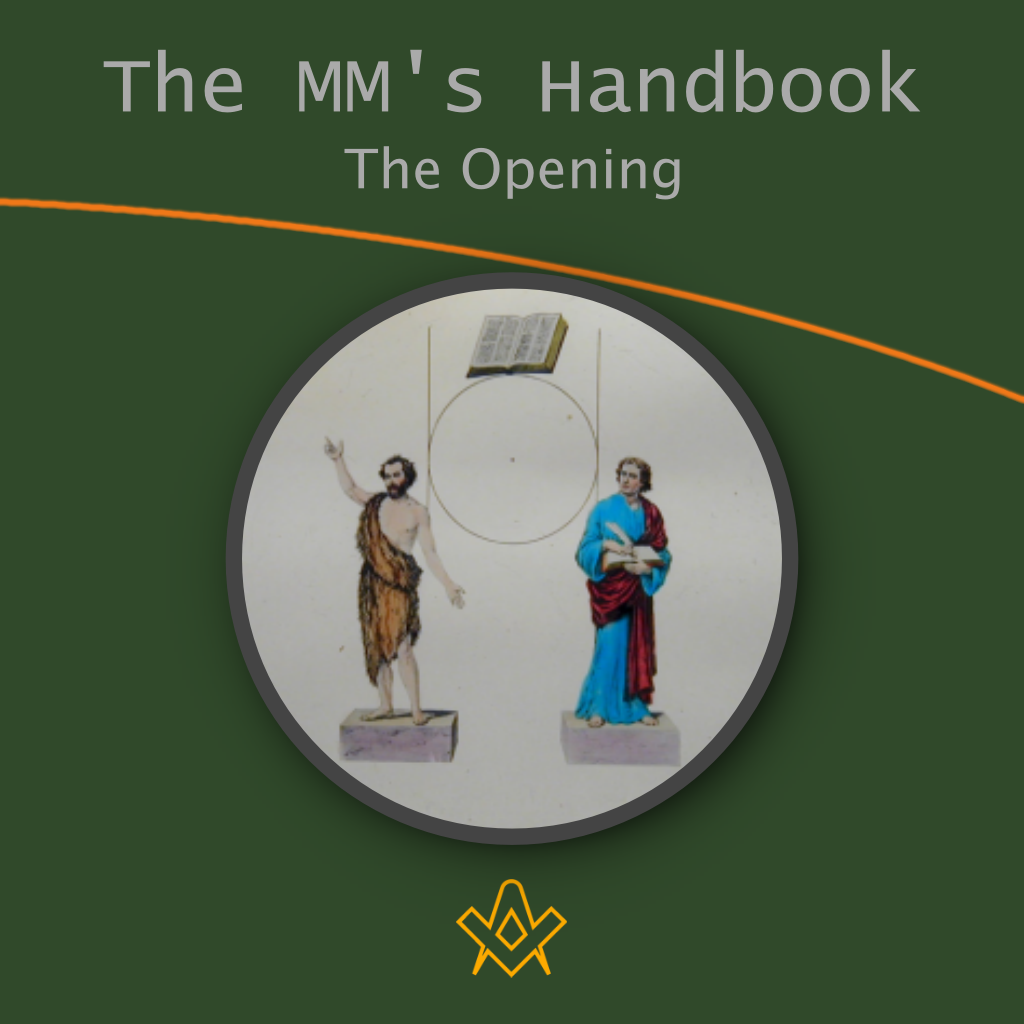 The Third Degree in Freemasonry is termed the Sublime Degree and the title is truly justified. Even in its exoteric aspect its simple, yet dramatic, power must leave a lasting impression on the mind of every Cand.

Having satisfied himself that all present are symbolically upright and moral men, the W.M. asks the J.W. if his spiritual nature has evolved sufficiently to control both soul and body.

The J.W. suggests that he should be tested, not only by the emblem of upright conduct, but also by the Compasses. Now these combined with the Square form a lozenge, which is itself a symbol for the Vesica Piscis, emblem of the female principle.

The Compasses, moreover, are the instruments with which geometrical figures are created, and more especially the Circle.

By means of two circles the triangle, emblem of the triune nature of God, is produced, while the Circle itself is the emblem of Eternity and therefore of Spirit.

A point within the circle forms the symbol for the Hindu conception of the Supreme Being, Paramatma, whence we have come and whither we shall all ultimately return. 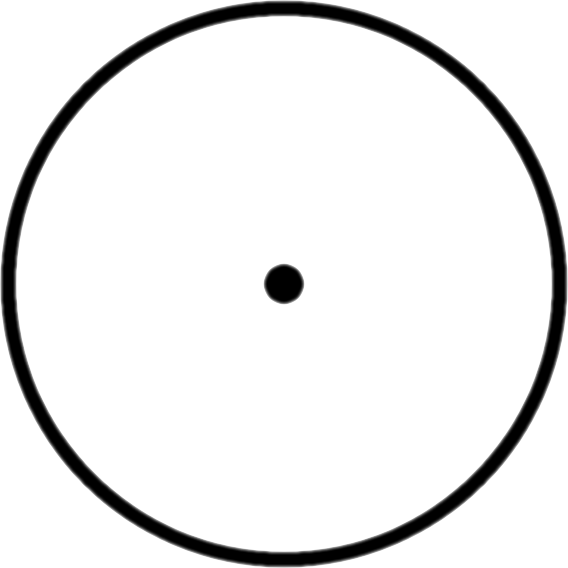 At the centre of the circle rests all knowledge; there shall we find every lost secret. Now such a figure can only be drawn with the help of the Compasses, and in drawing it the following significant symbolical act takes place.

Thus the Compasses, while they travel through infinity, are at the same time never separated from the centre, and from that point cannot err. This instrument may therefore be considered as standing for the Divine Spark in Man, in all its manifestations.

One of these is conscience; but the Divine Spark has many attributes and names. 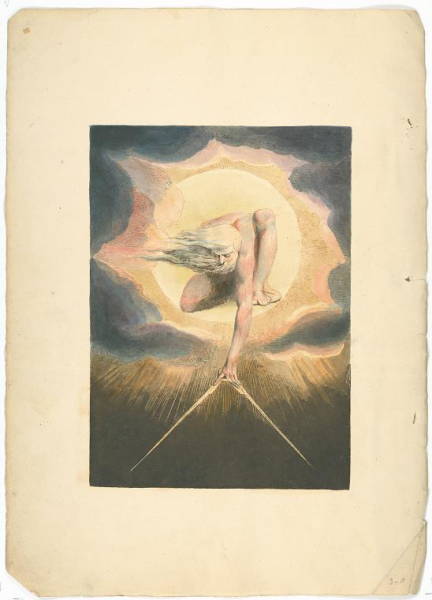 So the J.W.’s reply indicates that he is prepared to be tested both by the moral code and by the spiritual laws of our being. But after these preliminaries the proceedings become of an evenmore exalted nature.

All that has gone before has been but preparation for the Great Quest on which we must now set forth. It is the quest of the Soul for realisation of God, and at-one-ment with Him. This is the Mystic Quest of all ages, and, true to the ancient symbolism, it starts from the East, the place of Light, and goes towards the West, the place of darkness and death.

The East represents God, Who is our home. It indicates that each soul comes out from the place of Light, from Light itself, that is, from the very substance of God, descends through the Gateway of the Dawn and becomes incarnate in Matter. But it brings with it a sense of loss and separation, for it has come out from God, and the Divine Spark within it longs return whence it came.

Having lost the secret of its true nature and the way of return, it wanders in darkness, seeking and for most men the way of return is through the Western portal, the gateway of Death, for so long as we are finite beings we cannot hope to comprehend the Infinite.

Yet there are some few exceptions to the general rule, who, while still in the flesh, have a vision of the Divine splendour, are caught up in it, and became one with God.

To such men the return to ordinary mundane existence seems unreal and shadowy. Where others believe in God they Know Him, but it is almost impossible for them to convey to others the experience through which they have gone.

Yet that such experiences are real, as real as any other fact in life, is attested by a long line of witnesses right throughout the ages. To the average man, however, the first real step towards the realisation of what constitutes God is through the portal of physical death; – but even then the end is still far off.

Hence the answer explaining how the true secrets came to be lost indicates, not the cause of the loss, but the first step towards the recovery, and this fact is borne out by the subsequent events in the ceremony itself. 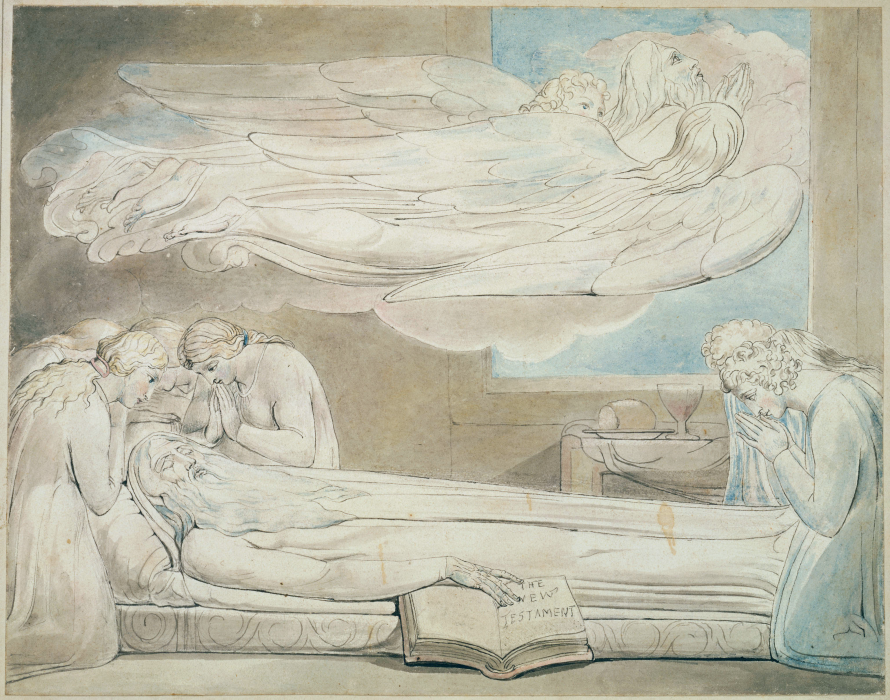 William Blake. Illustrations to Robert Blair’s ‘The Grave’, The Death of the Good Old Man.

Note, it is the body only that dies, and by its death enables the Soul and Spirit to re-discover in part the secrets which were last.

Yet this death of the Body effectually debars the communication of these secrets to the sorrowing F.C.s left behind. It is the passing through that veil which separates life and death which stars us on the road which ends with God.

It must never be forgotten, however, that the genuine secrets are never recovered in the Craft, although symbolically we rise from the grave, for that secret can only be discovered at or with the centre. – i.e., with God.

To that exalted position we can only attain after long journeys through the planes of existence beyond the grave. In our symbolism there is nothing which indicates that immediately after death man is fit to pass into the presence of the King of Kings.

But the Divine Spark within us is never really separated from the Great and All-Pervading Spirit. It is still part of it, though its glory is dimmed by the veil of flesh.

Therefore, just as one arm of the compasses ever rests on the centre, no matter how far the other leg travels; so however far we may travel from God, and however long and hard may be the journey, the Divine Spark within us can never be truly separated from Him, or err from that Centre.

So the task is set and the brethren go forth on the quest, that quest which must lead through the darkness of death, as the ceremony that follows tells in allegory.

It is not correct to say that the search hinted at in the Opening ceremony is suddenly abandoned, and those who think this misinterpret the whole meaning of the legend. 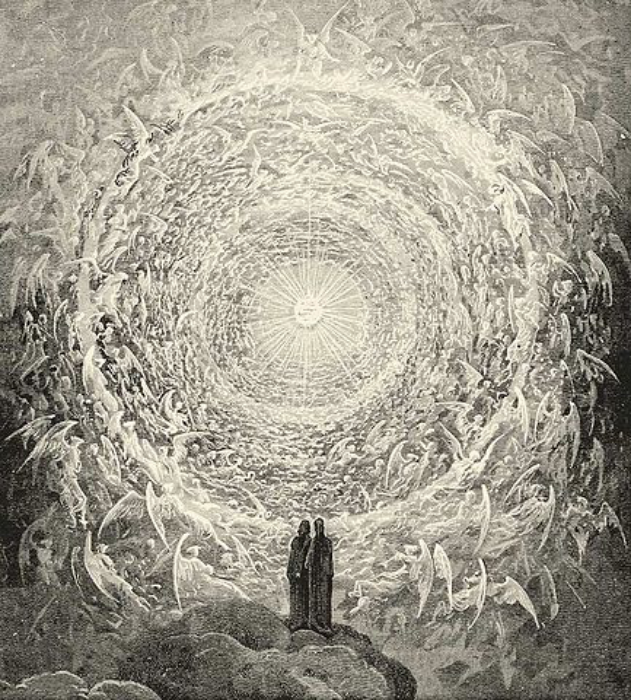 Rosa Celeste, by Gustave Doré, from The Divine Comedy by Dante (1892)

Never in earthly life shall we find the answer we seek, nay, even death itself will not give it; but, having passed beyond the grave, through the four veils of the Scottish rite, and so into the H.R.A., we find an excellent answer in allegorical and symbolical language, whilst the jewel of the degree emphasises what the end of the quest is.

Nor must it be forgotten that the body alone cannot realise the nature of God, and that is why without the help of the other two, H.A.B. neither could, nor would, disclose the secret.

The W.M.’s promise to help indicates that the Spirit will render assistance, but though the Spirit subsequently raises man from the grave it is not sufficiently evolved to give him the true secret. This can only come about when the Spirit has raised the Soul to a far higher stage of spirituality.

Though this is the degree of Destruction, that form of the Trinity is not invoked, and the title used corresponds more closely to the Hindu name for the All-Embracing than to their form of the Destroyer.

This no doubt is deliberate, for the symbol of this degree is the same emblem which among the Hindus denotes the Most High, namely the Circle with a Point within it.

In some Scotch rituals, after the Lodge has been opened in the first degree the I.P.M., or the D.C., opens the V.S.L., and, strange to say, does so with the words, “In the beginning was the Word.”

Similarly, when the Lodge is closed in the first degree the book is closed with the words, “And the word was with God.” 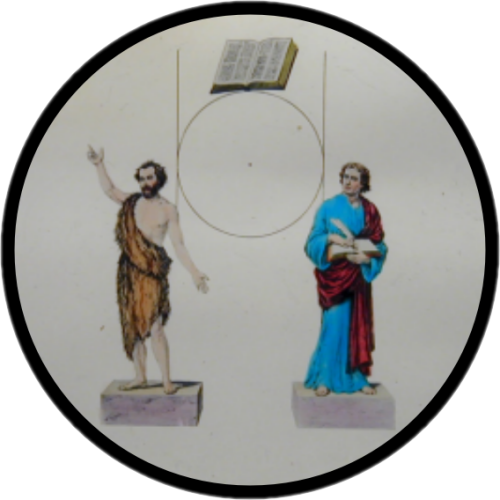 Here then we get two striking features:

1) the use of words from the first chapter of the Gospel according to St. John, and

2) their correlation with the phrase in the Third Degree, “At, or with the centre.”

This procedure suggests that the lost W. is the Logos, or Christ, and remembering what we have previously pointed out in the earlier books, i.e., that there is a perfectly logical Christian interpretation of the whole of the Craft ceremonies, this fact becomes of increasing
significance.

Before closing this chapter, I would like to add that the Third Degree lends itself to a Christian interpretation even more markedly than the former ones, and several of the higher degrees in
Freemasonry adopt and expand this line of teaching.

In view of the fact that in the Middle Ages Freemasonry was undoubtedly Christian, we cannot lightly reject this view of the inner meaning of the ceremonies, but as the frame work of our ceremonies apparently goes back before Christian times, a non-Christian interpretation is equally permissible.