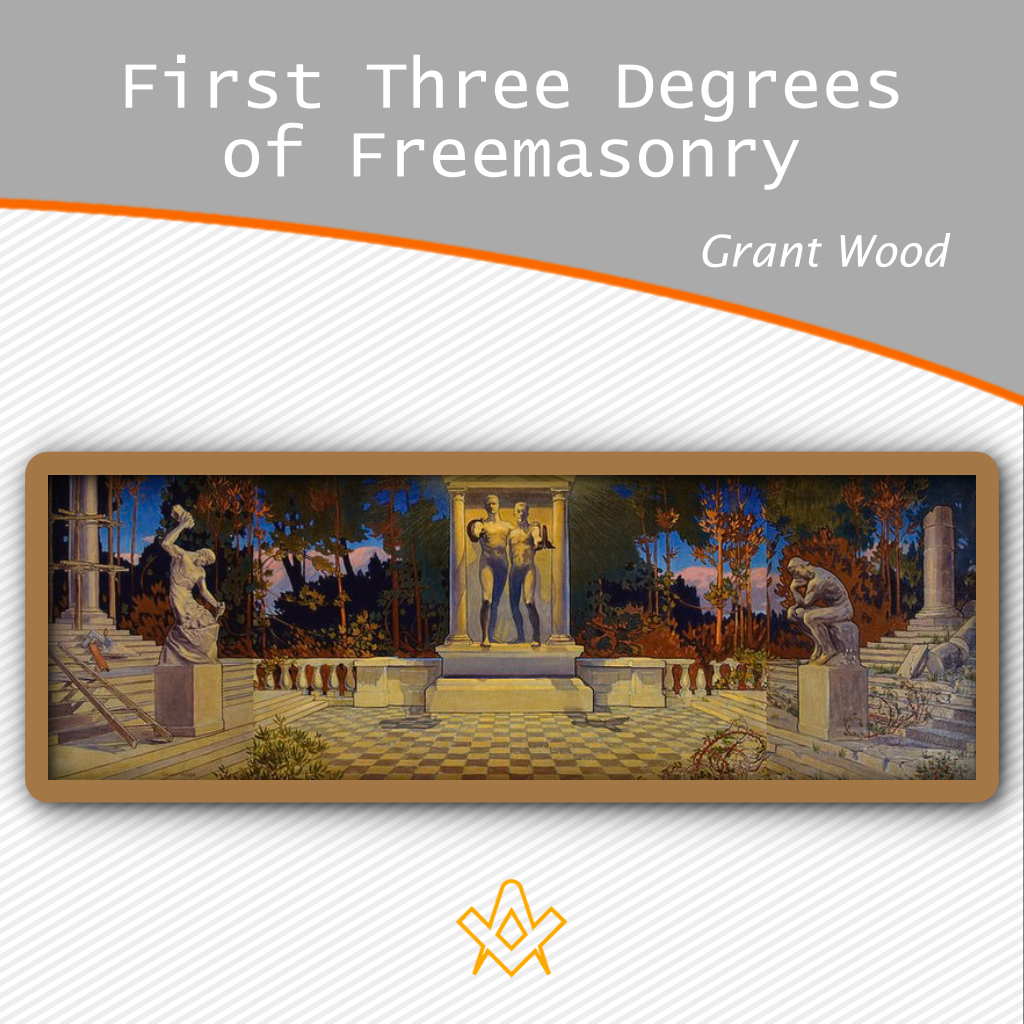 For many of us outside the United States, the name Grant Wood doesn’t ring any bells. Maybe a painting called ‘American Gothic’ piques some interest, but it is often only when we see the iconic image (widely parodied in American pop culture) do we recognise it, – and still the name of the artist might not really register.

However, it is not this image we are to focus on here, but an earlier piece, created by Wood in 1921, and influenced by Freemasonry. On a recent visit to the Grand Lodge of Iowa Masonic Library and Museums, I discovered a hidden gem – one of the most beautiful artistic representations of The First Three Degrees of Freemasonry. 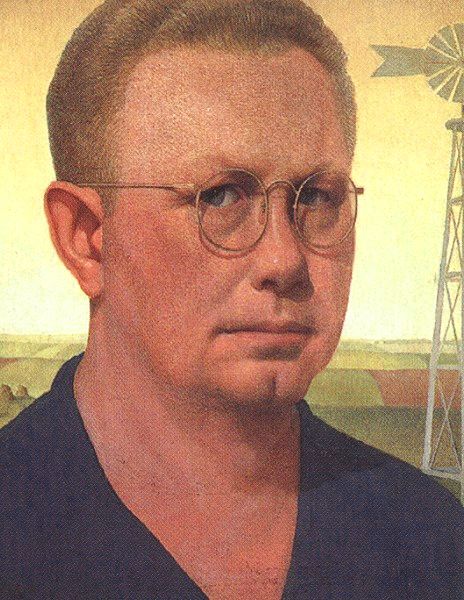 Grant showed artistic talent from a young age and whilst at high school taught himself a variety of handicrafts including jewellery, metalwork, ornamental lighting, and furniture making.

Along with his school friend, the artist Marvin Cone, he painted scenery for the drama group and illustrated school publications. On graduating from Washington High School in 1910, he enrolled in the Handicraft Guild, which was an art school in Minneapolis run primarily by women.

The Guild was central to the Arts and Crafts movement which was active in the city from 1904-1918, and due to its all-female staff and administration, was historically very important in the women’s arts movement in the States.

Revived shortly after the beginning of the 21st century, the Guild is once again a leading light in the Arts in Minneapolis.

Three years later, Grant became a student at the School of the Art Institute of Chicago, where he learnt silversmithing.

His life revolved around artistic pursuits and toward the end of WWI he joined the US military designing camouflage scenes. He then moved back home to his mother’s home in Cedar Rapids where he lived from 1924-1935; the loft of the carriage house was his personal domain and art studio.

He painted many of his most famous works in the studio including American Gothic (1930), Midnight Ride of Paul Revere (1931), and Daughters of the Revolution (1932).

The studio is now owned and preserved by the Cedar Rapids Museum of Art, the holders of the world’s largest collection of works by Grant Wood. 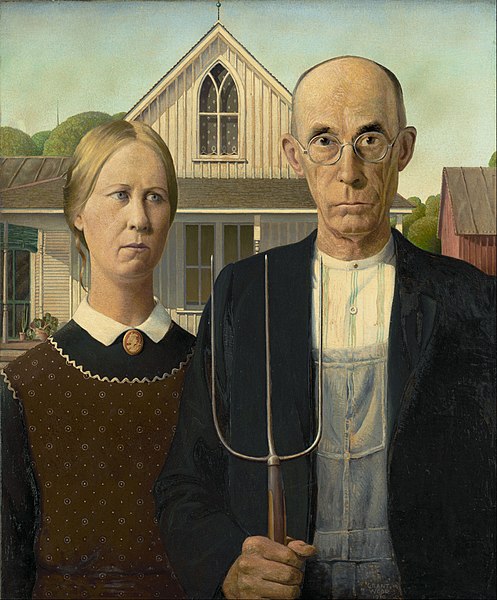 During the 1920s, Wood – along with Marvin Cone – travelled to Europe to study art, including Impressionism and Post-Impressionism, but it was Jan van Eyck, (and other 15th century Flemish artists), well known for the Arnolfini Portrait, and his beautiful triptychs, who was to influence Wood’s work significantly.

Wood’s art is representative of what is known as ‘American Regionalism’, a realistic modern art movement that arose out of the Depression era, and Wood, along with fellow artists Thomas Hart Benton and John Steuart Curry, became known as the ‘Regionalist Triumvirate’.

All three had studied art in Paris, and Regionalism was a kick-back against the European (and particularly Parisian) influence on artists.

Regionalism limited the spread of abstract art, which allowed American art to gain confidence, instead of relying on European styles.

It was a blend of nationalism and romanticism, something which resonated strongly for Americans during the Great Depression, reassuring them of pride in their heartlands. 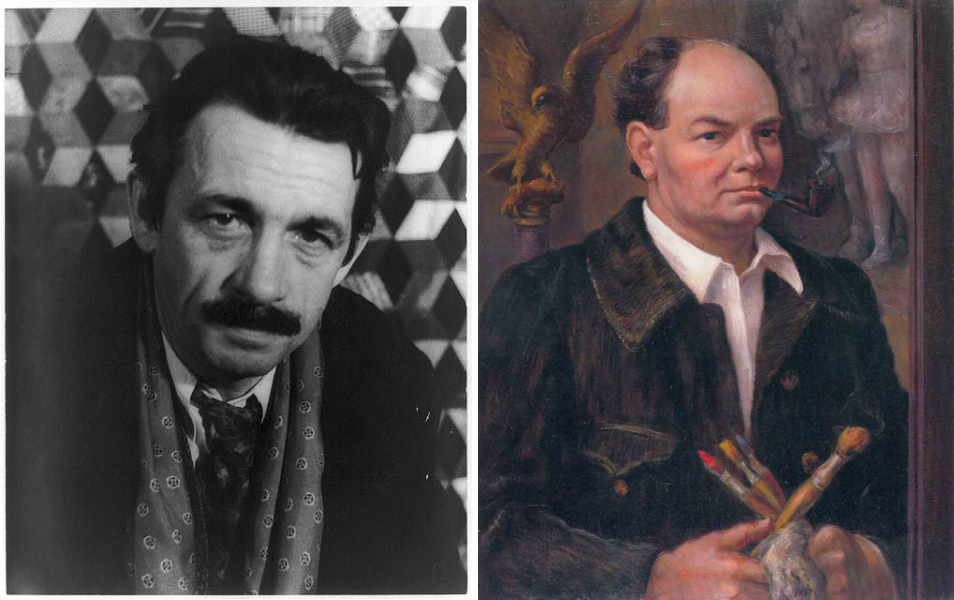 During the 1930s, Wood helped found the Stone City Art Colony, located near to his hometown of Anamosa.

It was set up in 1932, along with Edward Rowan, Adrian Dornbush and Marvin Cone, to help artists in the Midwest find a creative outlet during the Great Depression.

This venture led to Wood employing many of the artists to produce Depression Era murals (including the United States post office murals) in what was part of the innovative Public Works of Art Project(PWAP), which was developed to help bring professional artisans back into the workforce, and ran for six months between 1933-34.

Wood was the administrator for the PWAP in Iowa state and many of the ‘American scene’ (Regionalism) style murals created during that time can still be seen in post offices and public buildings throughout Iowa. 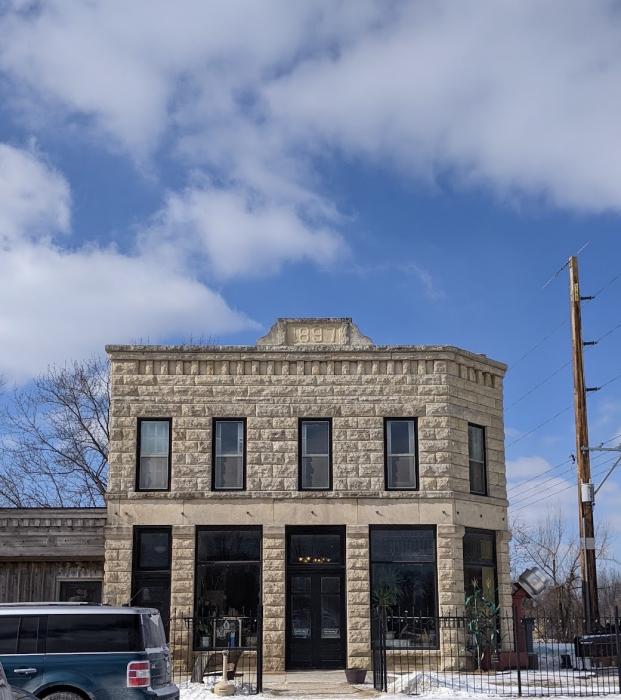 The General Store in Stone City, Anamosa, IA, near where Grant Wood and the Art Colony were situated.

The Influence of Freemasonry

Reproduced by kind permission of the Trustees of the Grand Lodge of Iowa’s Masonic Library and Museums, Cedar Rapids, Iowa.

Copyright Notice: ©2017 Mark Tade, all rights reserved, no usage without prior written permission.

Aside from his Regionalist paintings, one of Grant Wood’s most beautiful creations was also one of his earliest and is entitled ‘The First Three Degrees of Freemasonry’.

It is a much-underestimated piece, which now resides in the Museum of the Grand Lodge of Iowa in Cedar Rapids.

Bill Kreuger, Curator of the Grand Lodge of Iowa’s Masonic Library and Museums very kindly provided some fascinating facts about Grant Wood, and his masterpiece.

Not much is known about Grant Wood’s brief Masonic career, spanning only three years, but we know he was initiated, passed, and raised as a Freemason in May and June 1921, as a member of Mount Hermon Lodge No. 263 in Cedar Rapids.

He was suspended for non-payment of dues in March 1924. We are not sure why he did not pay his dues, one biographer indicated that he did not join non-artistic organizations, except the American Legion.

We think John Turner, who owned the mortuary behind the Museum, may have paid his initial fees, but that has not been verified

The painting was completed in 1921, and was commissioned by Past Grand Master (PGM) George Schoonover for the National Masonic Research Society located in Anamosa, IA.

The National Masonic Research Society published The Builder, one of the better Masonic research/reference periodicals of its day, its Editor was esteemed Freemason and author, Joseph Fort Newton.

It was published in Anamosa and Cedar Rapids from 1915 to 1922 and was one of many publications to come out of the region.

‘The First Three Degrees of Freemasonry’ is a beautiful example of Wood’s early work before he embraced Regionalism.

Evident are some obvious influences of fin de siècle Art Nouveau and the emboldened new Art Deco movement in Paris at the time he studied there; this was the kind of cultural influence he later came to reject in favour of ‘American scene’ realism.

The painting is a triptych (a nod perhaps to van Eyck), and the three panels, although distinct in the expression of the Three Degrees, blend seamlessly into one representation of Freemasonry’s inner journey.

There is clear evidence of inspiration from other artists. The Whitney Museum of American Art described the painting thus:

Wood grounded his image in the Masonic legend of Hiram Abiff, chief architect of King Solomon’s Temple, whose murder by individuals attempting to extract a secret password from him underscores the importance in Freemasonry of fidelity and the certainty of death.

From left to right, Wood illustrates the building of the temple, its completion, and its decay, setting within those panels auxiliary themes of man carving his own destiny, the equality of human beings, and the contemplation of life in old age.

Wood modeled the statuary in the painting on The Builder by Czech-American artist Albin Polasek (1879–1965), Michelangelo’s David, and Auguste Rodin’s The Thinker. 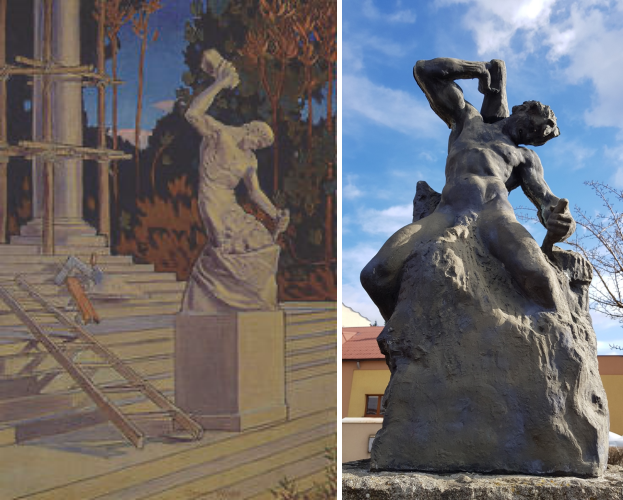 The left panel (the First Degree) shows a statue forming itself. This is a work of art created by Albin Polasek, who was a Czech-American sculptor.

Polasek became an instructor at the Art Institute of Chicago in 1916. The work he created is entitled ‘Man Carving his own Destiny’ and was featured as the frontispiece of The Builder in December 1916.

The allegoric ‘temple’ is being built, the Man creates himself from the rough stone into the perfect being, firmly placed upon a solid foundation.

The working tools are evident and the column behind the figure is in the process of construction.

The middle panel (Second Degree) has two men half-embraced holding the Letter G and the Level.

Above them the portico, with the all-seeing eye is partially hidden, perhaps representing the hidden aspect of G-d, yet the golden rays enlighten the figures beneath.

The fact they are unclothed seems to suggest that Masonry is a fraternal society where everyone is on the same level and espousing the ideas of equality and fraternity.

Sometimes the clothing we wear indicates our status in society. The fact they are embracing indicates Brotherhood. It is surmised that Wood got inspiration for the figures from Michelangelo’s ‘David’.

If you look to the left of the central panel you will notice that the foliage in the foreground is lush and the stone balustrades are complete but as your eye is drawn to the right of the image, towards the third panel, you become aware that the stonework is beginning to crumble, the foliage is becoming old and gnarly. 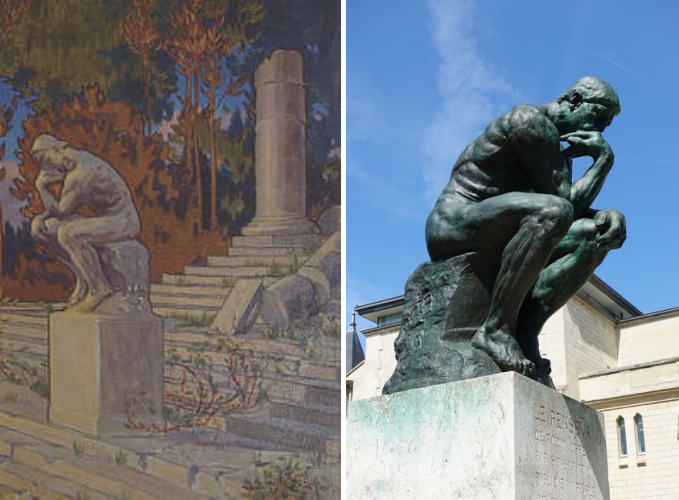 In the Third Degree (right hand panel) is a representation of ‘The Thinker’ by Rodin, showing a figure in contemplation.

The architecture in the background is now falling apart, the column is broken and time is running out – old age, the shadow of death is upon us; the figure contemplates his mortality.

Bill Kreuger told me, that like myself, there are often visitors to the Library and Museums who do not know who the artist, Grant Wood is. ‘When we mention one of the more famous works he created, “American Gothic,” visitors will say “oh yeah, now I know!”’

Although the image is available to view on the internet via Fine Art America, or Wikipedia, the physical painting displayed in the Grand Lodge of Iowa Library and Museums, with its subtle triptych framing, represents the true colours, not only physically but also the spirit of Grant Wood’s appreciation of Freemasonry.

It is well worth a visit purely to stand and contemplate the work of a Master Mason and a master craftsman – Wood’s Masonic painting remains an inspiration for many.

We would like to extend our grateful thanks to Bill Kreuger and the Trustees of the Grand Lodge of Iowa Library and Museums for the information on Grant Wood and permission to reproduce the image of the original painting held at the Museum.

About Grant Wood via CRMA

We introduce a new selection of masonic inspired NFT art collections available on Opensea produced by artists from around the globe.

We introduce a third selection of five masonic inspired NFT art collections available on Opensea produced by artists from around the globe.

We introduce a second selection of five masonic inspired NFT art collections available on Opensea produced by artists from around the globe.

'Song of Songs' - the Shir HaShirim

Freemason, composer and artistic director Laurențiu Ganea announces the premiere of his long-awaited composition of the 'Song of Songs' - the Shir HaShirim (also known as the 'Song of Solomon').

Masonic Art, Digital Art, NFTs - how does this all fit together?