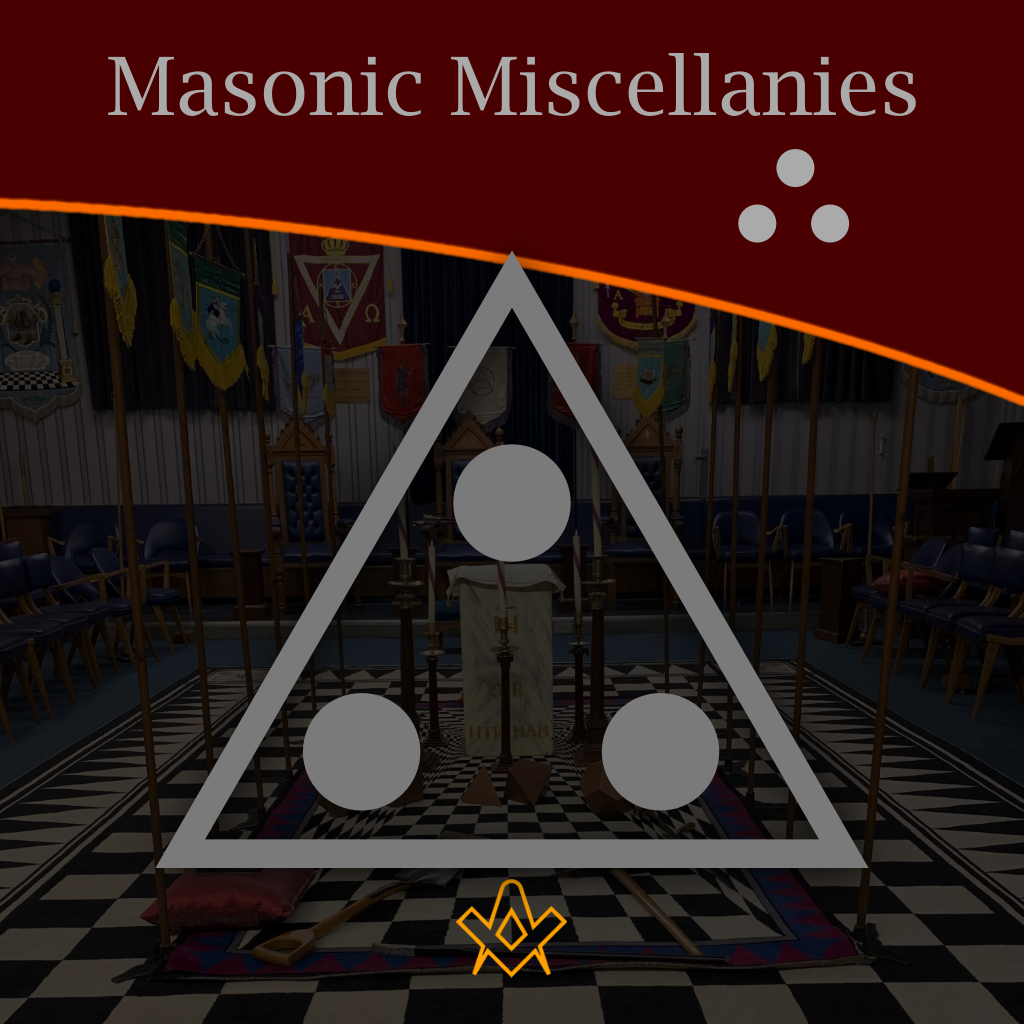 Three dots (or points) in an upright triangular shape ∴ is most commonly known as the ‘therefore’ sign – so why is it used in Freemasonry?

“In logical argument and mathematical proof, the therefore sign, ∴, is generally used before a logical consequence, such as the conclusion of a syllogism.

The symbol consists of three dots placed in an upright triangle and is read therefore. While it is not generally used in formal writing, it is used in mathematics and shorthand. 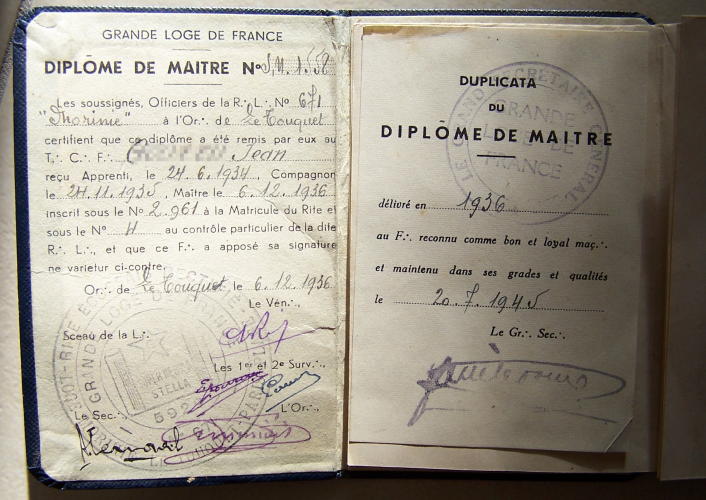 A Masonic document in French using a number of abbreviations. – By Christophe Dioux – Own work

However, in Freemasonry, the symbol is used to indicate a Masonic abbreviation.

Albert G. Mackey, in his Encyclopedia of Freemasonry, explains the meaning and usage of the “three points” [dots]:

Abbreviations of technical terms or of official titles are of very extensive use in Masonry.

They were, however, but rarely employed in the earlier Masonic publications.

For instance, not one is to be found in the first edition of Anderson’s Constitutions.

Within a comparatively recent period they have greatly increased, especially among French writers, and a familiarity with them is therefore essentially necessary to the Masonic student. Frequently, among English and always among French authors, a Masonic abbreviation is distinguished by three points ∴ in a triangular form following the letter, which peculiar mark was first used, according to Ragon, on the 12th of August, 1774, by the Grand Orient of France, in an address to its subordinates.

No authoritative explanation of the meaning of these points has been given, but they may be supposed to refer to the three lights around the altar, or perhaps more generally to the number three, and to the triangle, both important symbols in the Masonic system.

Before proceeding to give a list of the principal abbreviations, it may be observed that the doubling of a letter is intended to express the plural of that word of which the single letter is the abbreviation.

And in English L∴ and LL∴ to denote “Lodges”. This remark is made once for all, because I have not deemed it necessary to augment the size of the list of abbreviations by inserting these plurals.

Three points in a triangular form (∴) are placed after letters in a Masonic document to indicate that such letters are the initials of a Masonic title or of a technical word in Masonry, as G∴ M∴ for Grand Master, or G∴ L∴ for Grand Lodge.

It is not a symbol, but simply a mark of abbreviation.

The attempt, therefore, to trace it to the Hebrew three yods, a Kabbalistic sign of the Tetragrammaton, or any other ancient symbol, is futile.

It is an abbreviation, and nothing more; although it is probable that the idea was suggested by the sacred character of the number three as a Masonic number, and these three dots might refer to the position of the three officers in a French Lodge.

The abbreviation is now constantly used in French documents, and, although not accepted by the English Masons, has been very generally adopted in other countries.

In the United States, the use of this abbreviation is gradually extending… [p.815]

In the French and Scottish Rites, the Wardens are in the West, the Senior in the North-west and the Junior in the South-west; but in all, the triangular position of the three officers relatively to each other is preserved; for a triangle being formed within the square of the Lodge, the Master and Wardens will each occupy one of the three points. [p.866]

There is also an expression Frére/s Trois-Points (Three-Point Brother/s) which is a pejorative anti-Masonic term meaning ‘Freemason”, which again refers to the “three points arranged in a triangle constituting a symbol related to Freemasonry.

The use of these three points spread from the 18th century for the signature of confidential documents”.

The infamous anti-Masonic author Léo Taxil used the term in the title of his book ‘Complete Revelations On Freemasonry – Le Fréres Trois-Points’ (1885). 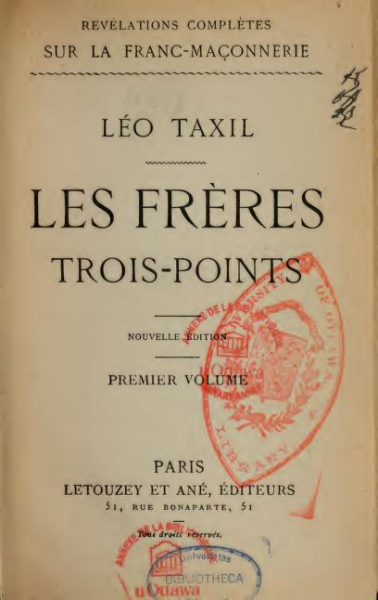 [Publisher’s Note:  The 3 dots are often currently found in social media channels.  Users in Linked-in often use the 3 dots .: or .’. to signify they are Freemasons.  Also the emoji 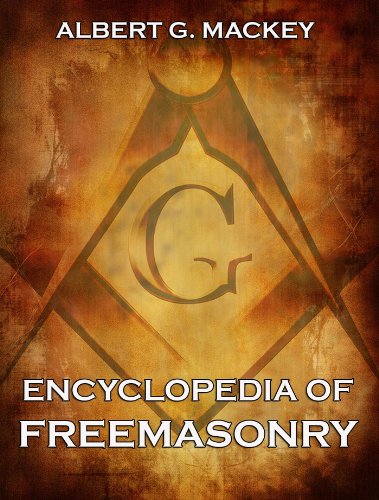 Dr. Albert G. Mackey, also the author of The Lexicon of Freemasonry appears as author of this ” Encyclopedia of Freemasonry and its Kindred Sciences,” which, being a library in inself, superseded most of the Masonic works which have been tolerated by the craft—chiefly because none better could be obtained.

Here, in one giant volume is a work which fulfils the hope which sustained the author through ten years’ literary labor, that, under one cover he “would furnish every Mason who might consult its pages the means of acquiring a knowledge of all matters connected with the science, the philosophy, and the history of his order.”

For more than thirty years Dr. Mackey has devoted earnest and constant study and research to the history, the objects, and the condition of Masonry.

In the present work, the crowning and successful result of a life’s labors, he has received no assistance from any one.

He says, ” Every article was written by myself,” and he adds, which would extenuate errors, had he fallen into any, “For twelve months, too, of the time occupied upon this work, I suffered from an affection of the sight, which forbade all use of the eyes for purposes of study.

During that time, now happily passed, all authorities were consulted by the willing eyes of my daughters—all writing was done by their hands.

I realized for a time the picture so often painted of the blind bard dictating his sublime verses to his daughters,” and his preface closes with the words, “Were I to dedicate this work at all, my dedication should be—To Filial Affection.”

Up to the present time the modern literature of Freemasonry has been diffuse, lumbering, unreliable, and, out of all reasonable proportions.