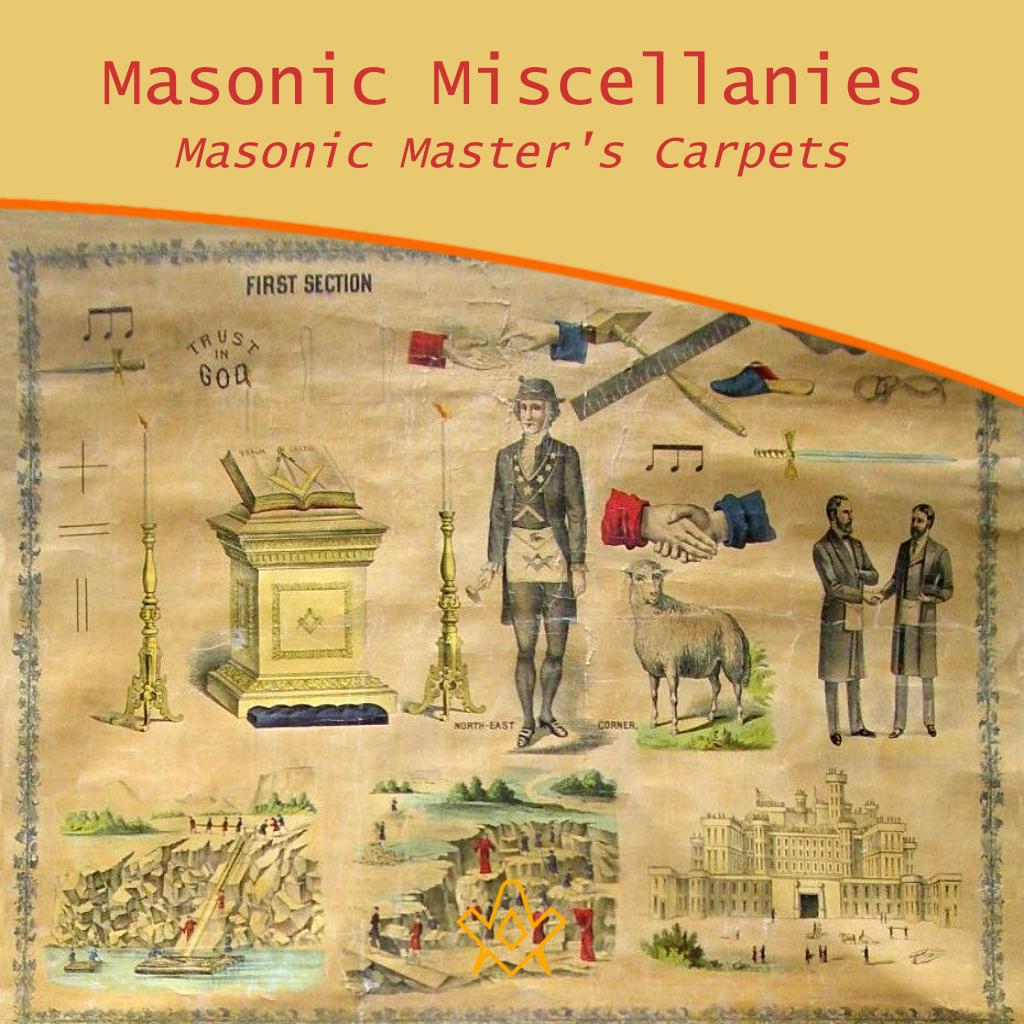 Have you got a magic “Masonic Master’s Carpet” in your lodge? I say ‘magic’ with my tongue firmly in my cheek because (as far as I know) these fabulous works of art don’t bestow any mystical powers but can bestow some educational ones! However, considering their possible value today, they may magic up some interest (or funds).

These “charts” or “carpets” were emblematical visuals for the instruction of Freemasonry. Lithographic posters were mounted on heavy-duty muslin, which ranged in size but the majority were around 3 x 4 feet.

They were essentially scrolls on rollers which could be pulled down as needed during Blue Lodge meetings of the 19th century, and utilised as teaching aides for the Worshipful Master and his lecturers to instruct new candidates in the symbolism of Craft Masonry.

Each chart/carpet featured many of the symbols we still recognise today:

the Sun, Moon and Stars, Jacob’s Ladder, King Solomon’s Temple, Pillars of J and B, the All-Seeing Eye, the Square and Compasses, the Ark and Rainbow, Beehive, 47th Problem of Euclid, Winged Hour Glass, Sword Pointing to a Naked Heart, and various other Working Tools.

The reason for the alternative use of the word “carpet” to describe the charts was that when the degrees were being explained to the initiates, the chart was taken off of the wall and rolled out on the floor of the Lodge room.

Who designed and made them?

In the mid-1800s, as Freemasonry was spreading across America, two Ohio companies were well-known for their fraternal materials.

Sherer Publications in Cincinnati was well-known for their Masonic degree carpets and lecture plates, and their creator, John Sherer, produced some interesting works on early Masonry. M.C. Lilley & Co. from Columbus became well-known for their magic lanterns and their hand-painted Magic Lantern glass slides.

Grand Master Richard A. Dickerscheid’s theme of this Masonic year is “Use the Tools.” The Sherer carpets and Lilley slides are both significant tools our local lodges use for educational purposes.

The images used on those carpets and slides found their way to the photographic slides, filmstrips, and videos still in use today.

As lodges embraced new technologies, often the old technologies ended up in storage or forgotten. Your lodge may have one of these hidden gems of Masonry just waiting to be revealed.

John Sherer was a leading publisher of Masonic books and prints and is well-known for his portrait print commemorating George Washington as a Freemason.

A lithographer and publisher based in Cincinnati, Ohio, from 1847 to at least 1859.

He was in a partnership as Sherer & Rowse from 1847-1849 after which time he went into business under his own name, or as Sherer Publications.

His specialty was Masonic-themed prints but he also sold regalia and other supplies to lodges. Perhaps his best-known items were his Masonic Carpets, a set of charts mounted on muslin or canvas to be hung in Masonic lodges.

They showed the symbols and emblems associated with different lessons presented to aspiring Masons and were referred to during lectures to members. The visual representations of Masonic symbols were intended to serve as reminders of these lessons.

Charts mounted on spring rollers, in wall case, each $22.00.

1st Degree – We publish these in two styles, beautifully lithographed in numerous colors. They are without exception the finest Charts for the Lodge Room ever devised.

The Sherer Carpets have been the standard work for the Lodge Room for over thirty years. The late John Sherer, their author, largely devoted his life to arranging and perfecting these beautiful works for the Lodge Room instructions, and so well did he succeed that no one has ever been able to compile a Chart that would stand for a moment when compared with Sherer’s.

Nearly every Grand Lodge in America has officially endorsed the Sherer Carpets and recommended each subordinate Lodge to purchase one, and hundreds of Grand Officers have declared these Carpets absolutely indispensable in conferring the degrees intelligently.

The emblems are arranged in systematic order to correspond with the several lectures, and give more light to the candidate than can be done in any other way.

They print indelibly upon the every Mason’s mind the true alphabet of Masonic symbols. Thousands of Lodges have purchased them, and Bob Morris truly says:

‘The present generation of Masons have been educated symbolically by Brother Sherer’s Carpets.’

2nd Degree – Latest improved addition, in map form, mounted on heavy muslin, on roller all ready to hang in the Lodge.

Embraces all the emblems of the Blue Lodge Degrees, correctly and systematically arranged by section and Degree, with a ground floor view, or correct representation of a Lodge in each Degree.

All the work is so distinct that brethren in distant parts of the hall my follow the Worshipful Master as he points out the emblems, and refresh their memories as to the meaning of these mystic symbols.

This is unquestionably the most beautiful, correct and elaborate Carpet ever devised. Size 6 X 6 feet.  Price  $10.00

3rd Degree – In three parts; each degree on a separate chart with ground floor view of a Lodge in each Degree.

The Charts are lighter to handle and the candidate has before him only the emblems of the Degree he has just taken.

Besides the carpets, Sherer also published “Sherer’s Gems of Masonry” (1859), a book in which the symbols of the three Blue Lodge degrees and four of the York Rite degrees are explained, referring to places in the Preston Ritual, Anderson’s Constitutions, Ahimon Rezon, and Holy Scriptures.

They were offered with original Sherer images and commentary and poetry of Brother Rob Morris, creator of Order of the Eastern Star who was serving as Grand Master of Kentucky at the time.

Later he produced “The Masonic Ladder” (1866), and “Sherer’s Masonic Monitor” (1867) containing symbols and explanations of the Blue Lodge and York Rite degrees with commentary by MWB Morris, and combined with the Preston-Webb Ritual Monitor.

He issued his charts in 1874, and a second printing of the same edition was released by R.W. Carroll & Co. in Cincinnati. 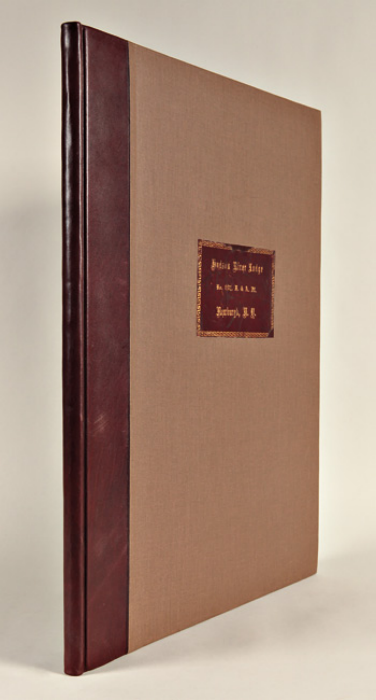 The images in Sherer’s publications were later adapted to produce lecture slides and videos that are still in use in Masonic lodges today.

John Sherer’s rare text “Sherer’s Masonic degree book of ancient Craft Masonry: being a correct presentation of the emblems of the blue lodge degrees of Entered Apprentice, Fellow Craft, and Master Mason according to the American system”, currently sells for £6,300.03! 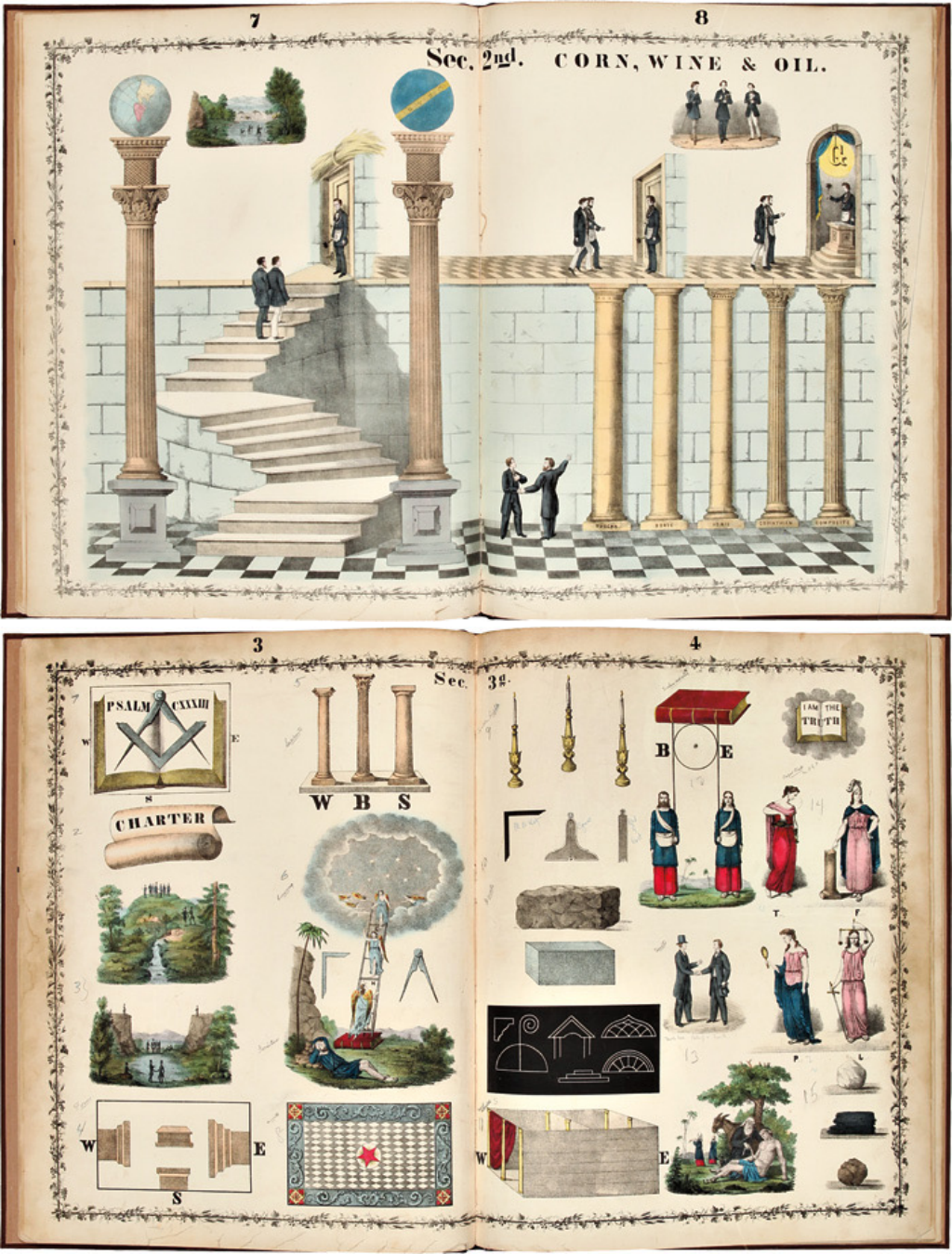 You can view some of the original images via the link here, courtesy of a post on r/freemasonry by reddit.com/user/bmkecck/ (2017) 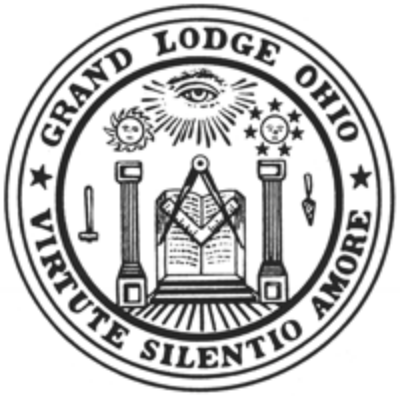 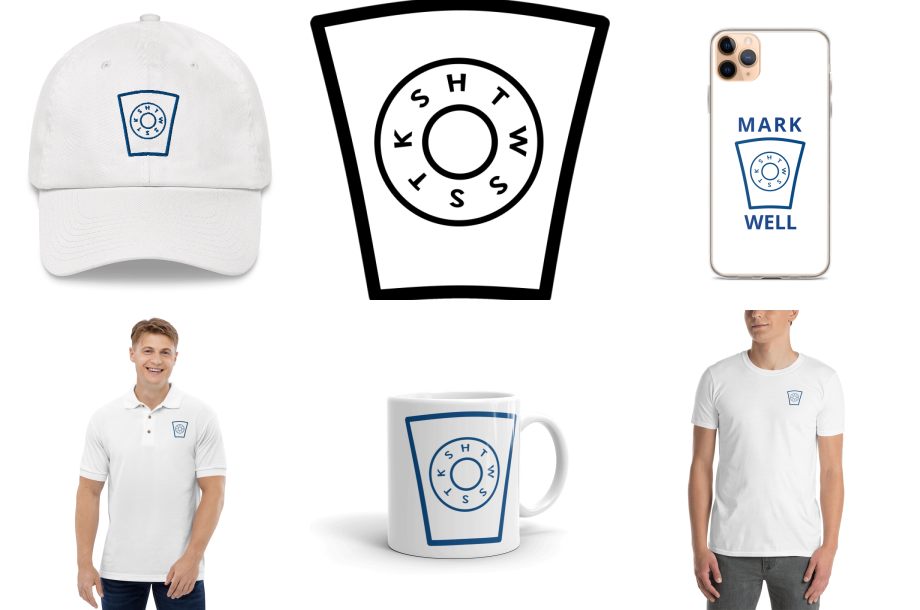