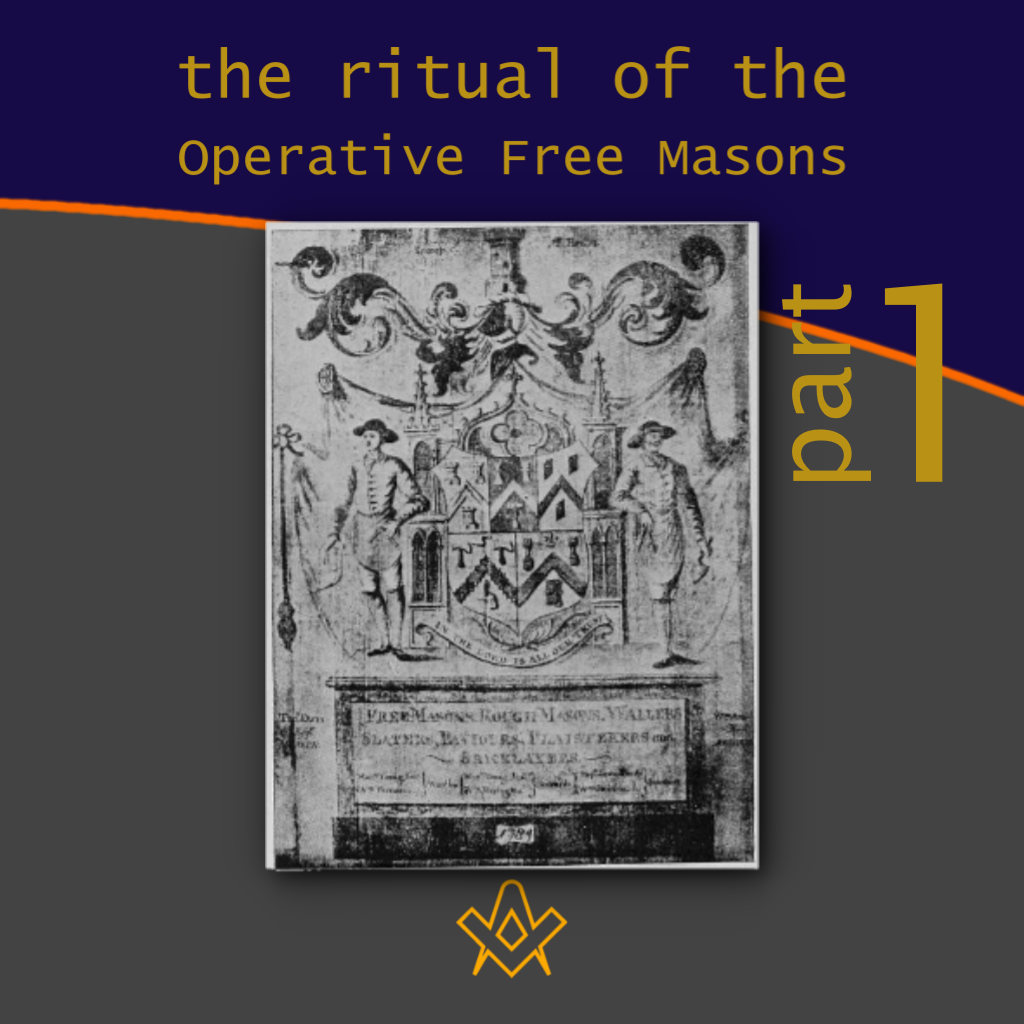 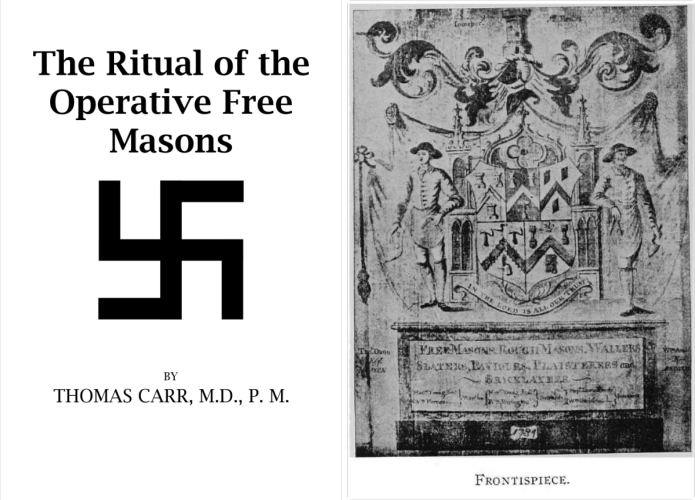 The above Lodge, No. no, of the York Division, passed the following resolution at a meeting held on the sixth day of May, 1911:

“That the paper written by Thomas Carr of 9 Carlton Terrace, Blackpool, M. D., on ‘The Ritual of the “Operative Free Masons’ is a true and accurate account “of the ceremonies practiced by this Lodge, and that the “tradition which has been handed down to us is that “these ceremonies have been so practised from time im- “memorial.

“That the said paper is based upon information furnished by us or by our accredited members and that the “said Thomas Carr has received our permission to publish the said paper.

“That Thomas Carr is a corresponding member of “this Lodge in full standing and of good repute.” 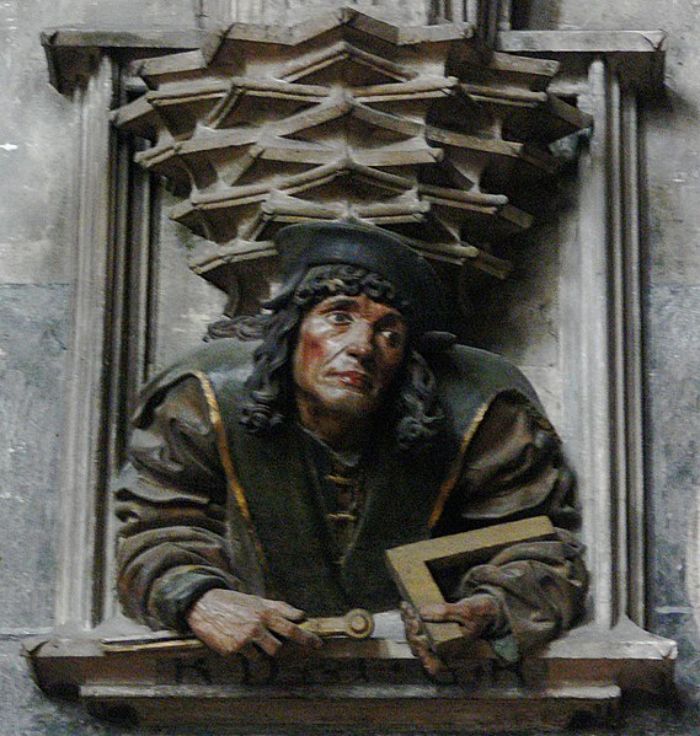 It is well established that Societies of Operative Masons existed in England, France, and Italy during the Middle Ages and built the Churches, Bridges, and Cathedrals which still adorn those countries.

Also, that in Germany there flourished a well-organized today of Masons, known as Steinmetzen.

The name Free Mason first occurs in Statute 25, Edward 3, (1352). Elsewhere I have shown how Masons had to travel about to their work and how English Masons worked in France, and French Masons in England.

In days when writing was confined to the clerics and diplomas were unknown, it was the readiest solution of the difficulty of an unknown man testifying he was, a skilled and accredited craftsman, to have a system of pass words and signs which enabled him to prove he had been regularly taught his trade and was no cowan or pretender.

These ancient Operative Masons of the Middle Ages, both in England and on the Continent, had their regular procedure by which a lad was admitted as an apprentice, taught his work, and subsequently became entitled to practise his trade.
A good many of the old Regulations and Charges of these early days have come down to us. Some 80 examples are known and recognized.

The following is a list of some of the more important of these “Ancient Charges” as they are generally called:

In these Ancient Charges we get evidences of the commencement of Moral teaching and of Secret Signs.

It is at once obvious that from very early times a high moral standard was inculcated by these Ancient Charges.

In the oldest Charge of all, “The Regius,” dating about 1390, implicit truth is recommended.

The Harleian No. 2054, dating from the 17th Century, was originally the property of the Chester Guild and among other things says there are “several words and signs of a Free Mason to be reveiled” which may be communicated to no one “except to the Master and Fellows of the said Society of Freemasons. So help me God.” Here followeth the worthy and godly oath of Masons.

There is said to have been a M.S. by King Henry VI (1422-1461) in the Bodleian Library, in which that King says “some Maconnes are not so virtuous as some other menne, but for the most parte they be more gude than they would be if they were not Maconnes.”

In the 17th Century and probably earlier private gentle- men and Army Officers began to be admitted as Members of this Society of Free Masons in England and Scotland.

John Boswell, Esq., a landed proprietor, was a member of St. Mary’s Chapel Lodge, Edinburgh, in 1600.

Robert Moray, Quarter Master General of the Scottish Army was made a Mason at Newcastle in 1641.

Elias Ashmole, the celebrated antiquarian, and Colonel Henry Manwaring were made Masons at Warrington in 1646.

It is interesting to note the fact that of these three men, who were among the earliest Honorary, or non-operative, or in more modern terms Speculative, Masons made in England, Moray was a Scotch Covenanter, Ashmole was a Royalist and Manwaring was a Parliamentarian.

So that even in those days Masonry was a bond of union between men of differing religious and political opinions, and that even in the time of the great Civil War.

In 1647 Dr. William Maxwell joined the Lodge at Edinburgh. As far as is known he was the first medical man to become a Mason.

It is also noteworthy that in the minutes of St. Mary’s Chapel Lodge, Edinburgh, it is recorded that Boswell attested his mark at the meeting of the Lodge held on June 8th, 1600.

The Earls of Cassilis and Eglinton were initiated in the Lodge of Kilwinning in or about 1670. Private gentlemen such as these I have instanced began about this time to be known as Accepted Masons, and gradually increased in number.

In 1717 under the influence of Dr. Anderson and his friends some Operative Freemasons with some of these non-operative.

Accepted or Speculative Freemasons, belonging to four Lodges in London, met and formed the first Grand Lodge; a combination in which Speculative Masonry instead of Operative Masonry was the primary consideration.

Architecture and Operative tools became symbolical, but the Ritual was based on the Ritual of the old Operative Society, of which indeed it was largely a reproduction.

The Apprentice Degree and the Fellow Craft Degree were founded on the corresponding degrees of the Operative system.

Later on, when a Master’s Degree — not a Master of a Lodge but a Master Mason — was added, Anderson and his friends invented a ceremony based in the Operatives’ Annual Festival of October 2nd commemorating the slaying of Hiram Abiff at the Building of King Solomon’s Temple.

The real Secrets and the real Ritual of the Operative Masters’ Degree could not be given as but few knew them, namely only those who had actually been one of the three Masters, 7th Degree, by whom the Operatives were ruled, and Anderson had certainly not been one of these; his function having been that of Chaplain, although it is quite possible he had been admitted an Accepted member of the Craft some years previously in Scotland.

continue reading next chapter Part 2 continues in next month's issue →

The Ritual of the Operative Free Masons

This work has been selected by scholars as being culturally important, and is part of the knowledge base of civilization as we know it. This work was reproduced from the original artifact, and remains as true to the original work as possible. Therefore, you will see the original copyright references, library stamps (as most of these works have been housed in our most important libraries around the world), and other notations in the work.

As a reproduction of a historical artifact, this work may contain missing or blurred pages, poor pictures, errant marks, etc. Scholars believe, and we concur, that this work is important enough to be preserved, reproduced, and made generally available to the public. We appreciate your support of the preservation process, and thank you for being an important part of keeping this knowledge alive and relevant.