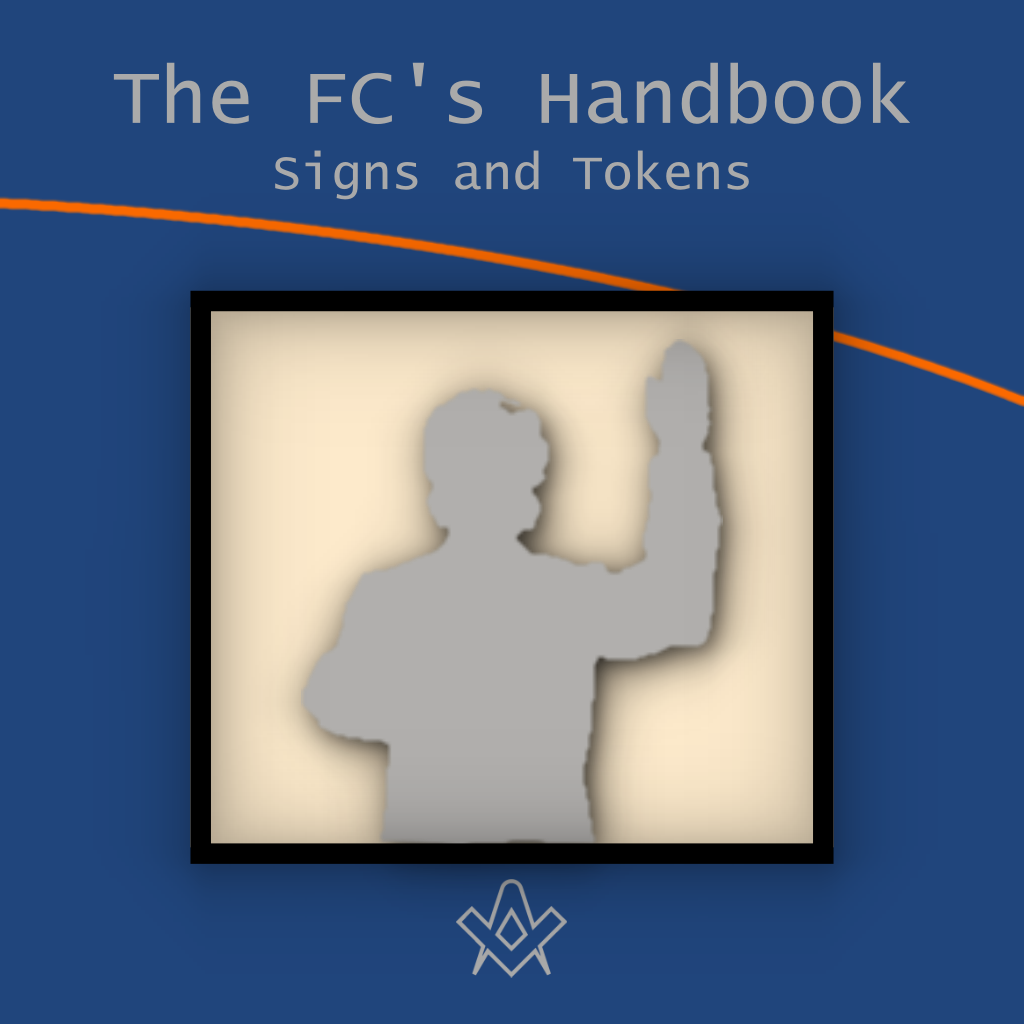 As before, the Candidate is taught by making the tau cross to trample under foot his animal passions, thereby reminding him that spiritual progress always entails increased moral rectitude.

CHAPTER 3
The Signs and Tokens

The first difference the Candidate notes is that the Sign is of a threefold nature. This no doubt has a reference to the triple nature of man, but to the Candidate the most important fact is that whereas in the first degree the Sign refers only to the penalty in this degree two other lessons are taught him.

The first part is the Sign of Fidelity and implies not merely fidelity to his obligation, but obedience to the rules of the G.G.O.T.U. .

We can only hope to be preserved if we conform to those rules laid down by Him for our preservation.

The second part of the sign or hailing sign is said in our rituals to be the sign of prayer, or perseverance, but in its essence it is the sign of preservation, the sign associated with God the Preserver, under whatsoever name He is called, throughout the world.

In my former book, “Freemasonry and the Ancient Gods”, I have adduced abundant evidence of this and here it is only necessary briefly to summarise that evidence.

In ancient Egypt it is associated with Horus; in India with Hanuman, the skilful craftsman who built the bridge of Rama, the seventh incarnation of Vishnu, the Preserver. 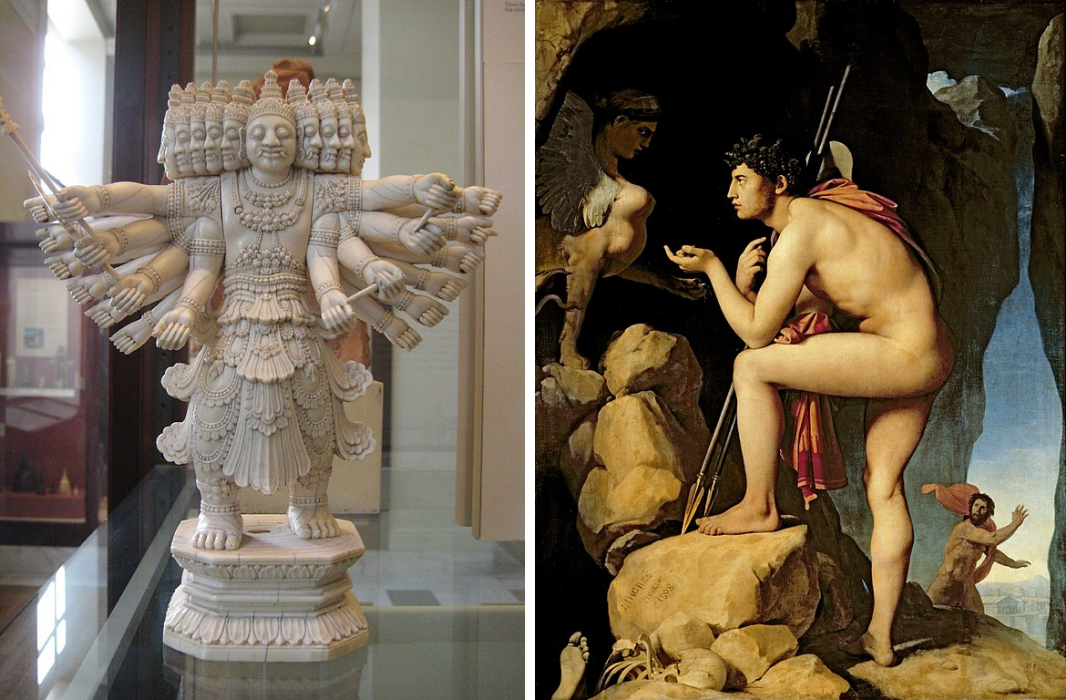 left: Ravena, the Demon King
right: Oedipus and the Sphinx by Jean-Auguste-Dominique Ingres

It was in this position that he brought the fruit of the tree of life to the dead and dying in the battle which Rama waged against Ravena, the Demon King.

In Mexico, Quetzcoatl makes this sign when he is wounded by the evil giant. The Roman College of Architects at Pompeii painted it in a fresco depicting the preservation of OEdipus.

The lineal descendants of the Roman Collegia, the Comacine Masons, in the 13th Century made a marble pulpit for the church of Ravello near Sorrento, not very far from the buried city of Pompeii.

This pulpit they adorned with mosaics depicting Jonah coming up alive out of the whale’s mouth and as he does so he makes this sign – Hailing Sign and Sign of Fidelity. complete.

Now we are told that Jonah persevered in prayer for three days while he was in the belly of the whale, and was therefore preserved. 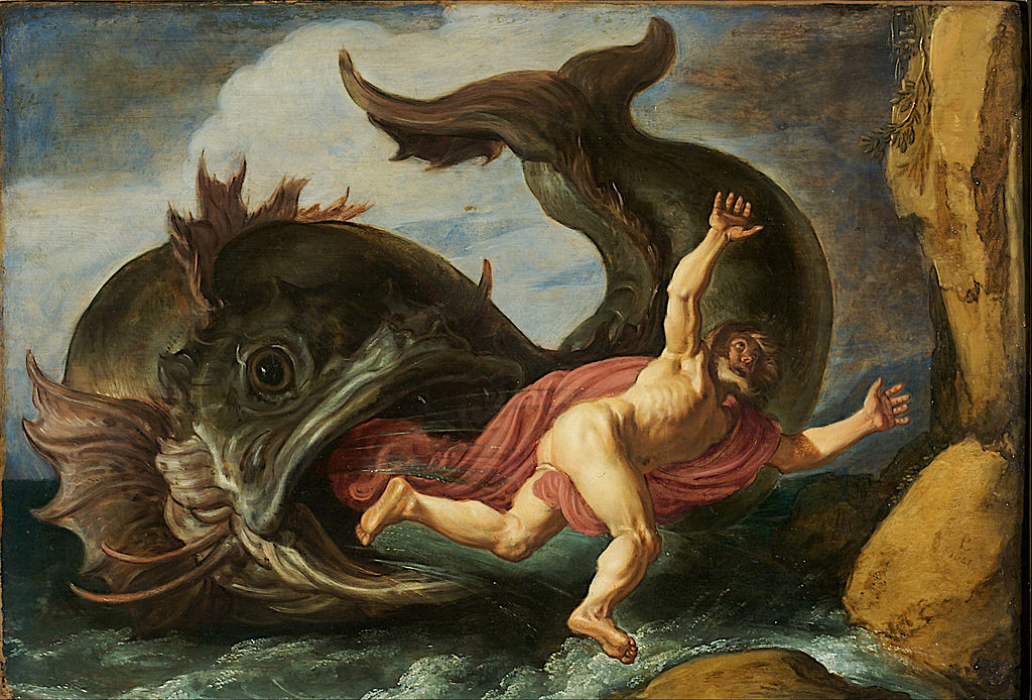 It is therefore not surprising to find that in England a 13th Century carving of the Holy Trinity at Peterborough depicts Christ making this sign, for to us Christians Christ is the Preserver, since by His death we are saved.

Thus it will be seen, firstly, that the Sign is of great and genuine antiquity, and has been passed down by a regular line of successors from the days of the Ancient Mysteries; and secondly, that it is clearly associated with God the Preserver and the idea of preservation.

This fact emphatically shows that when we speak of the G.G.O.T.U. we are speaking of the Preservative aspect of God. It is also worth noting that except in London and those parts of England where the influence of London workings has spread, the left arm is always held in a line with the shoulder, and not at right angles.

In the ancient representations of it both the London and the Provincial forms are shown-a fact of considerable interest. Among the various initiation rites of the savages, as, for example, among the Yaos, in Nyasaland, this Sign is also used with the inner meaning of preservation, and two pillars form an integral part of their ceremonies.

The Penal Sign is also old, for it is shown on numerous Egyptian frescoes and is referred to in the Book of the Dead. The significance of the Penalty itself Hes in the fact that among the ancient Egyptians the Heart was regarded as symbolising the good and bad in man.

It was weighed at the judgment against the feather, the symbol of truth, and if a man’s life had been evil the heart and the Feather failed to balance and he was rejected. If therefore the heart could not be produced, clearly the man was doomed to destruction.

This point should be compared with the tongue in the first degree, and just as in that degree the throat was indicated because it is an important occult centre, so here the heart is considered to have a similar significance.

The part pressed in the grip has always been regarded by palmists as masculine, just as in the previous degree it was feminine.

The meaning of the word. will be revealed in the chapter dealing with the tracing board, for obvious reasons, and those entitled to know will recognise where it occurs.

As before, the Candidate is instructed how to give and accept challenges and then is sent round the lodge to be tested by the officers, who represent the Body and Soul respectively.

This part of the procedure having been adequately dealt with in our first book, need not detain us now, for those parts which are peculiar to the second degree also arise in the tracing board.

It is however worth noting that the phrase about the house standing firm for ever is not found in any passage of Scripture. It suggests the existence of an ancient masonic tradition, whose full history it is difficult to discover, but which is in closer analogy with certain phrases in the Book of the Dead associated with the Pillars, Tat and Tattu, which do convey the meaning thus indicated. 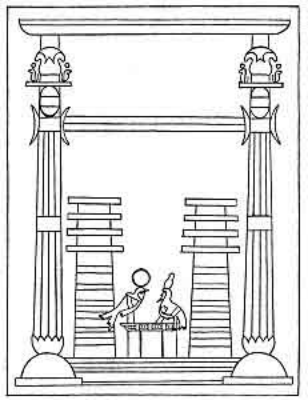 It therefore looks as if we have here a genuine old tradition, now disguised under a Biblical form, but not derived direct from the Bible.

Once again the S.W., representing the Soul, calls on the Divine Spirit for some outward mark of his favour, and is told that he himself must invest with the distinguishing badge.

To-day this badge has on it two rosettes, symbolising the rose, and made of light blue. Light blue was the colour of Isis, and later became the colour of the Virgin Mary.

The Rose is her emblem, and these two facts imply that all below the master’s. chair are regarded as passive or feminine, whereas only those who have actually ruled the Craft, and represented the Creative Spirit, are masculine.

Thus on the Past Master’s apron we get the Tau Cross, instead of the rosette, an emblem of the masculine and creative power. The shape of our modern apron is undoubtedly of comparatively recent date.

Our ancient Operative brethren had large aprons, unadorned, and members of the different degrees were distinguished by the manner in which the apron was worn.

It was worn up to indicate that the spiritual had not yet entered into control of the material man. It was usually turned down in the second degree, but, to distinguish between the second and third degrees, one or other of the corners was turned up.

The apron was suspended by strings round the waist, and these are still used on the aprons of the first and second degree, although in a Master Mason’s apron these strings have been replaced by a band of webbing.

There are still aprons in the higher degrees however which are kept in place by cord and we shall consider the whole matter more fully when we come to discuss the Master Mason’s apron, which is full of both historical and symbolical interest.

Freemasonry And The Ancient Gods Of India

This scarce antiquarian book is a facsimile reprint of the original. Due to its age, it may contain imperfections such as marks, notations, marginalia and flawed pages. Because we believe this work is culturally important, we have made it available as part of our commitment for protecting, preserving, and promoting the world’s literature in affordable, high quality, modern editions that are true to the original work.