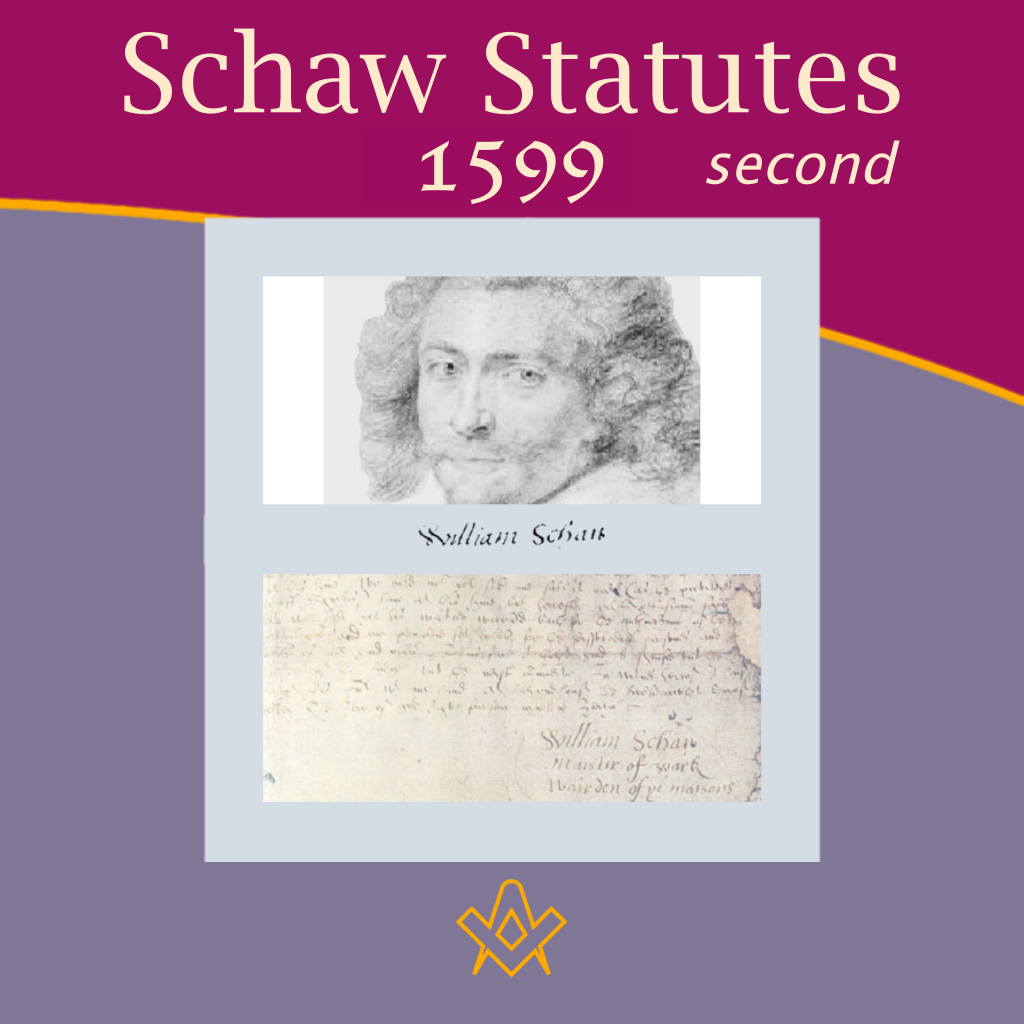 Scotland was a wild and rebellious land at the end of the sixteenth century and had long sought to preserve its independence despite wars and invasions.

Scotland was ruled by the son of Mary, the former wife, and widow of Francis II.

The King for the last thirty years, James VI (1566-1625) applied within his kingdom a policy of absolutist divine right, ensuring peace and order.

His mother was executed in 1587 in London. This made him the heir of the virgin Queen, Elizabeth I, whom he succeeded on the throne of England in 1603.

The context – Stone cutters and layers, according to the masonic tradition, arrived in Britain at the time of St. Alban and King Athelstan, and in Scotland built churches, castles, manors and other mansions; they soon permanently installed and established lodges, which were no longer just work sites, but places to meet in.

The Lodge of Kilwinning already claimed to be several centuries old.

The document – On December 28, 1598, the day of the Holy Innocents, and the day after the Feast of St. John the Evangelist, William Schaw (1549-1602), Master of Works for the crown of Scotland, General Supervisor of all masons, applied his signature at the bottom of the Statutes and Ordinances that members of the Craft would have to observe in all circumstances.

The document, which is part of a register consisting of six volumes, is now the property of the Lodge of Edinburgh, Mary’s Chapel, which still honors itself as having been created in the last years of the sixteenth century. 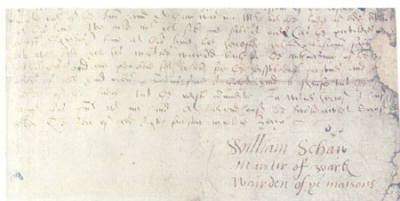 Signature of William Schaw on a copy of the Second Statutes, as “maister of wark” and “wairden of the maisons”, Holyroodhouse, 28 December 1599.

First, it is ordered that the warden within the boundaries of Kilwinning and other places subject to their lodge [1] shall be chosen and elected yearly by a majority of the masters of the said lodge on the twentieth day of December, and that within the church of Kilwinning as the head and second lodge of Scotland, that thereafter the General Warden shall be advised yearly who is chosen warden of the lodge, immediately after his election.

2. – It is thought necessary and expedient by my Lord Warden General that every lodge in Scotland should have, in the future, their old and ancient liberties as before, and in particular, that the lodge of Kilwinning, second lodge of Scotland, shall have their warden present at the election of warden within the boundary of the Nether Ward of Clydesdale, Glasgow, Ayr and Carrick; with the said warden and deacon of Kilwinning having power to convene the remaining wardens and deacons within the aforesaid boundaries when they have any important need to do so, there to be judged by the warden and deacon of Kilwinning whenever it shall please them to convene, either in Kilwinning or in any other part of the west of Scotland and the aforesaid boundaries.

3. – It is thought necessary and expedient by my Lord Warden General, that Edinburgh shall be in all future time, as before, the first and principal lodge in Scotland, and that Kilwinning shall be the second lodge, as it has been before notoriously manifest in our old ancient writings, and that Stirling shall be the third lodge, according to the old privileges thereof.

4. – It is thought expedient that the wardens of every lodge shall be answerable to the Presbytries [courts of the church] within their sheriff’s jurisdiction, for the masons subject to their lodges, regarding all offenses any of them shall commit, and one-third part of the fines paid shall be used for the Godly uses of the lodge where any offense was committed.

5. – That there shall be trials made yearly by the wardens and eldest masters of every lodge, extending to six persons, who will try all of the offenses, so that punishment may be executed in conformity to equity and justice, and good conscience and the ancient order.

6. – It is ordered by my Lord Warden General that the warden of Kilwinning, as second in Scotland, shall select and choose six of the most perfect and worthiest masons within their boundaries, to test the qualification of all the Masons within the aforesaid boundaries of their art, craft, Science and ancient memory; so that the warden and deacon may be answerable hereafter for such persons as are responsible to them within his boundaries and jurisdiction.

7. – Authority is given to the warden and deacon of Kilwinning as the second lodge, to exclude and expel from the society and company all persons who are disobedient either to church, craft, council and other statutes and acts to be made hereafter for good order.

8. – It is ordered by my Lord Warden General that the warden and deacon, with his Quarter masters, shall select, choose and constitute a qualified notary [2] as an ordinary clerk and scribe, and that the said notary who is chosen shall occupy the office, and that all indentures, discharges and other writings whatsoever, regarding the Craft, shall only be written by the clerk, and that no type of record, neither title nor any other official document, shall be used by the said warden and deacon before named , unless it is made by said clerk and subscribed by his hand.

9. – It is ordered by my Lord General that the entire old ancient acts and statutes previously made by the predecessors of the masons of Kilwinning shall be observed faithfully and kept by the Craft in all times to come, and that no apprentice or craftsman, in any time hereafter, be admitted or entered, except within the church of Kilwinning, as his parish and second lodge, and that all banquets for entry of apprentices of fellows of craft be made within the said lodge of Kilwinning.

10. – It is ordered that all fellows of craft at his entry pay to the common books of the lodge the sum of ten pounds of money, with ten shillings worth of gloves before he is admitted, and that shall include the expense for the banquet, and he shall not be admitted without a sufficient test and proof of memory and art of craft by the warden, deacon and quarter masters of the lodge, under the supervision of the former and answerable to the General Warden.

11. – That all apprentices to be admitted shall not be admitted until they have first paid to the common bank, aforesaid, the sum of six pounds of money, to pay for the banquet for all the members of the lodge and the apprentices thereof.

12. – It is ordered that the warden and deacons of the second lodge of Scotland, Kilwinning, shall take the oath, fidelity and truth of all masters and fellows of craft within the entire boundaries committed to their charge, yearly, that they shall not keep company with cowans or work with them, nor any of their servants or apprentices, under the penalty contained in the former acts, and paying thereof.

13. – It is ordered by the General warden, that the warden of the lodge of Kilwinning, being the second lodge in Scotland, shall test every fellow of the craft and every apprentice on the art of memory and science thereof, according to their vocations; and in case they have lost any point thereof required of them, they must pay the penalty as follows for their laziness, that is, each fellow of the craft, twenty shillings, each apprentice ten shillings, to be paid to the box for the common good, yearly, and in conformity to the common use and practice of the lodges in this realm.

And for the fulfilling, observing and keeping of these statutes and all other acts and statutes previously made and to be made, the warden, deacons and quartermasters of the aforesaid lodges, for good order, keeping in conformity to equity, justice and ancient order, to the making and setting down thereof, the General Warden has given his power and authority to the said warden and those above written to set down and make acts in conformity with the above rules.

And in sign and token thereof, I, the General Warden of Scotland, have set down and caused to be written these acts and statutes, and have subscribed the same with my hand, after the testimonial on this side and on the other side.

Be it known to the warden, deacon and to the masters of the lodge of Kilwinning that Archibald Barclay, being named Commissioner for the said lodge appeared in Edinburgh the 27th and 28th of December, where the said Archibald, in the presence of the Warden General and the masters of the lodge of Edinburgh, produced his commission, and behaved very honestly and carefully for the discharge of such things as were committed to him; but by reason of the absence of his Majesty out of town, and because there were no masters except those of the lodge of Edinburgh convened at this time, we could not get any settled order (as the privileges of the Craft require) at this time, but hereafter when occasion offers we shall get his Majesty’s warrant both for the authorizing of the lodge’s privileges, and for any penalty set down for the disobedient persons and disturbers of all good order.

Therefore, I thought it good to signify to all the brothers of the lodge, that in witness hereof, I have subscribed this present document with my hand at Holyrood House [3] the 28th day of December, the year of God 1599.

[1] – Masonic tradition has it that the Lodge of Edinburgh was founded in July 1599; in fact the indicated date marks only the beginning of the oldest record of the lodge, doubtless created generations, if not centuries earlier.

The Lodge of Kilwinning, which was founded during the construction of the local abbey (1140), has no records prior to 1642.

As for the old Lodge of Stirling, it says itself that its operative Masons were, in the twelfth century, the builders of the castle and of two churches in the city.

[2] – The Secretary of the Lodge is a profane notary, which tends to prove that if the builders need to demonstrate professional skills and moral values​​, they did not show particular culture or education.

[3] – Built in the twelfth century in Edinburgh, Holyrood Castle (Holy Ruid) served primarily as a royal residence from the fifteenth to the seventeenth century, including being a residence for the Stuart King James VI.

At the time the manuscript was written in Edinburgh, Scotland was the home to various lodges, including those of the operative Masons of Edinburgh, it provides an interesting Masonic Catechism with questions and answers, a genuine ritual of admission.

We look at a modern transcript of the second William Schaw Statutes dated 1599. An operative masons charter for stone cutters and layers in the building industry of the time. A set of rules and regulations including penalties.

The several Papal declarations against Freemasons after the formation of the Grand lodge in England in 1717 are well known. The Avignon Decree (1326), published 400 years prior, is the earliest known document to set out the Catholic Church's intentions…

The Bologna Statutes or Carta Di Bologna 1248 - Masonic document of Operative Masonry, the oldest one found to date. 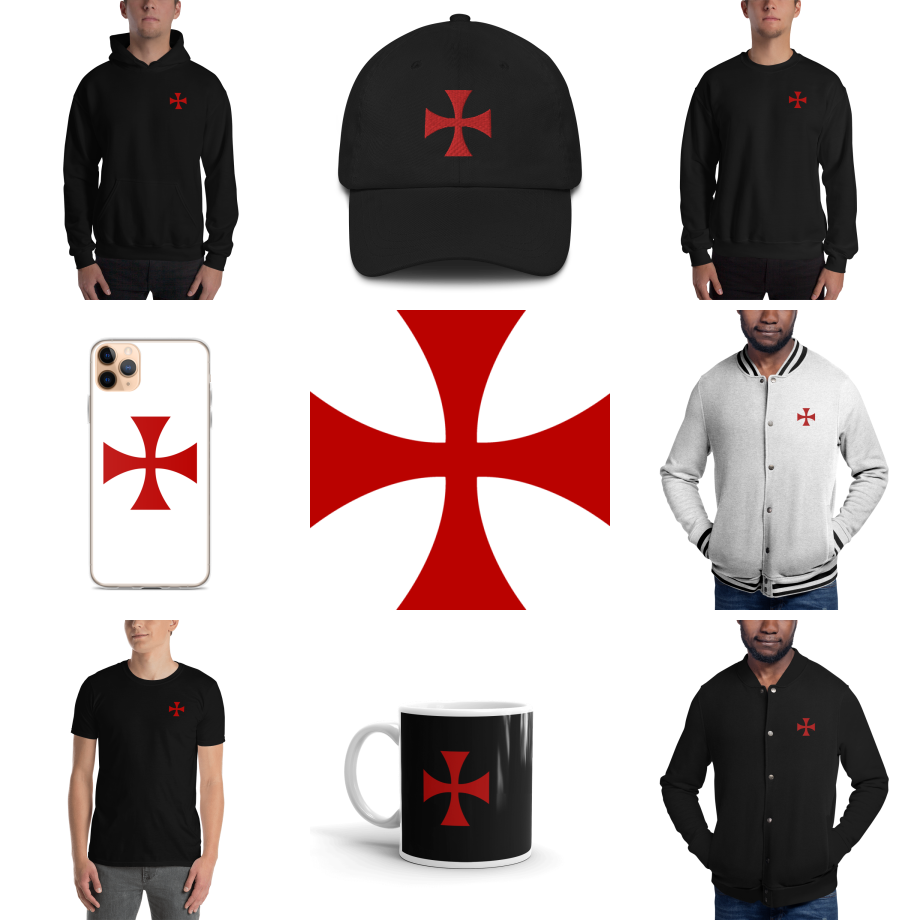