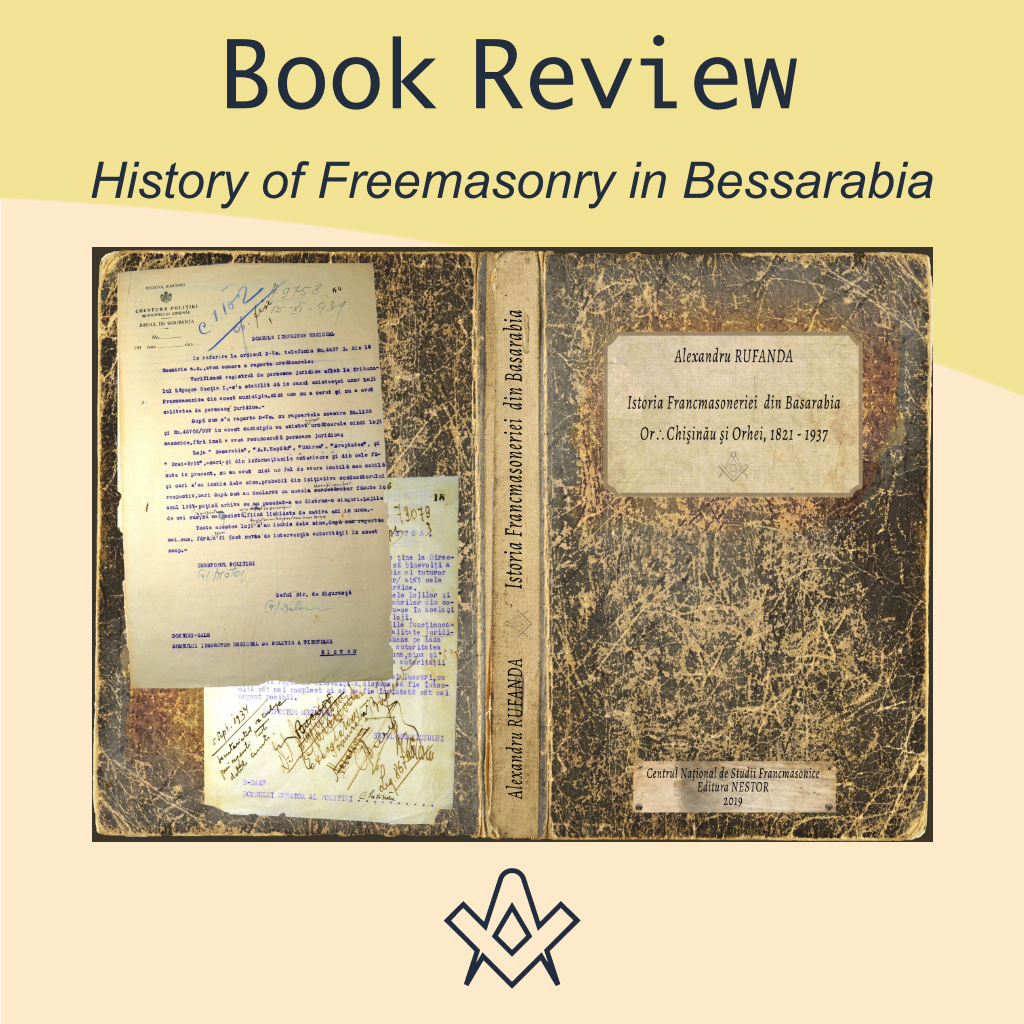 Book review by guest reviewer Gheorghe Bichicean Phd. on the History of Freemasonry in Bessarabia. Or :. Chisinau and Orhei, 1821-1937, by Alexandru Rufanda

Alexandru Rufanda is no longer a promise but a certainty in the group of researchers in the history of universal Freemasonry and in Romania. With specialized training in the sciences of history, the author of this book adds to the studies, articles and books published so far a paper-document: The History of Freemasonry in Bessarabia. Or :. Chisinau and Orhei, 1821-1937.

Privileged by his knowledge in the field of Freemasonry, Alexandru Rufanda goes beyond the monotonous framework of a technical exposition, making a thorough analysis of documents in the domestic and international historical context. I say ‘privileged’ to emphasize the author’s commitment to research with the feeling of one who begins his work at noon and ends it at midnight, with a tenacity that requires respect.

The history of Freemasonry is not a history behind the scenes, a history of reality. It fits into national histories and emphasizes the role that members of this secret and even more discreet society today have played in the birth and rebirth of nations.

Rufanda’s book has two parts, corresponding to the 19th and 20th centuries respectively, and is a true mirror of the past of an old territory, a Latin island inhabited by Romanians, called Bessarabia (now the Republic of Moldova), annexed to Russia tsarist in 1812. It is the century in which Freemasonry began and developed in Russia, marked by great economic, political, social and military changes. The author’s approach begins with the Order of the Russian Knights and then the emergence of para-Masonical societies, literary or scientific, which prefaced the emergence of Freemasonry in that huge Empire. Focused on the discovery and capitalization of documents, framing national events in which the history of secret or discrete societies is affirmed and included, it is meritorious for Alexandru Rufanda.

The book assumes reality and places in the sanctuary of Freemasonry personalities of Romanian history, science, culture and spirituality who were not only at the centre of events that marked the history of this space called Bessarabia, but thought and shaped it , they created it through their action. Alexandru Rufanda does not simply write “pages” from the history of Freemasonry out of the desire to be assumed or joined by this discreet and moral organization.

Unpublished documents discovered and published by the author complete the information on the existence of Eteria, a secret initiation organization, created after the model of the Italian Carbonari and the Ovidiu Lodge, a lodge that concentrated in its ranks great personalities of the history of this Romanian space. The author emphasizes on the basis of documents that Freemasonry was at the forefront of the revolutionary movements in Bessarabia, of the movement for national unity such as Pantelimon Halippa and Ioan Inculeț. In this way, Freemasonry in Bessarabia thus became a pillar of the National Temple in 1918.

A rich correspondence, also unpublished, between Russian, Romanian and European Freemasons, is closely linked to political and military events, it was necessary to reconsider and re-analyse them. Also, with scientific rigor, the author draws attention to hypotheses about the belonging to Freemasonry of personalities such as Alexander Pushkin, for example. These hypotheses are worthy of careful research, as he himself suggests.

The second part of the book is the ‘witness’ of the development of Masonic lodges in Bessarabia, from 1918 reunited with the Kingdom of Romania. Alexandru Rufanda analyses finely and on the basis of historical documents, the increase and decrease of Freemasonry in Romania, of the Grand National Lodge of Romania, until, in 1937, it fell asleep.

Written with meticulousness and professionalism, the book gives readers the pleasure to discover the beauty of a writing based on documents, reason, critical attitude, offering a work undertaken and very well written. And the space to which the book is circumscribed is one consecrated in our national history, now included in the emulation of a sustainable Freemasonic construction.

‘Lege, lege, relege, ora, labora et invenies!’ (‘Law, law, reread, pray, work and invent!’). For Freemasons and laymen, it is an exhortation to knowledge. And Mr. Alexandru Rufanda’s book is part of this exhortation.

Editor: you can read Alexandru Rufanda’s article about