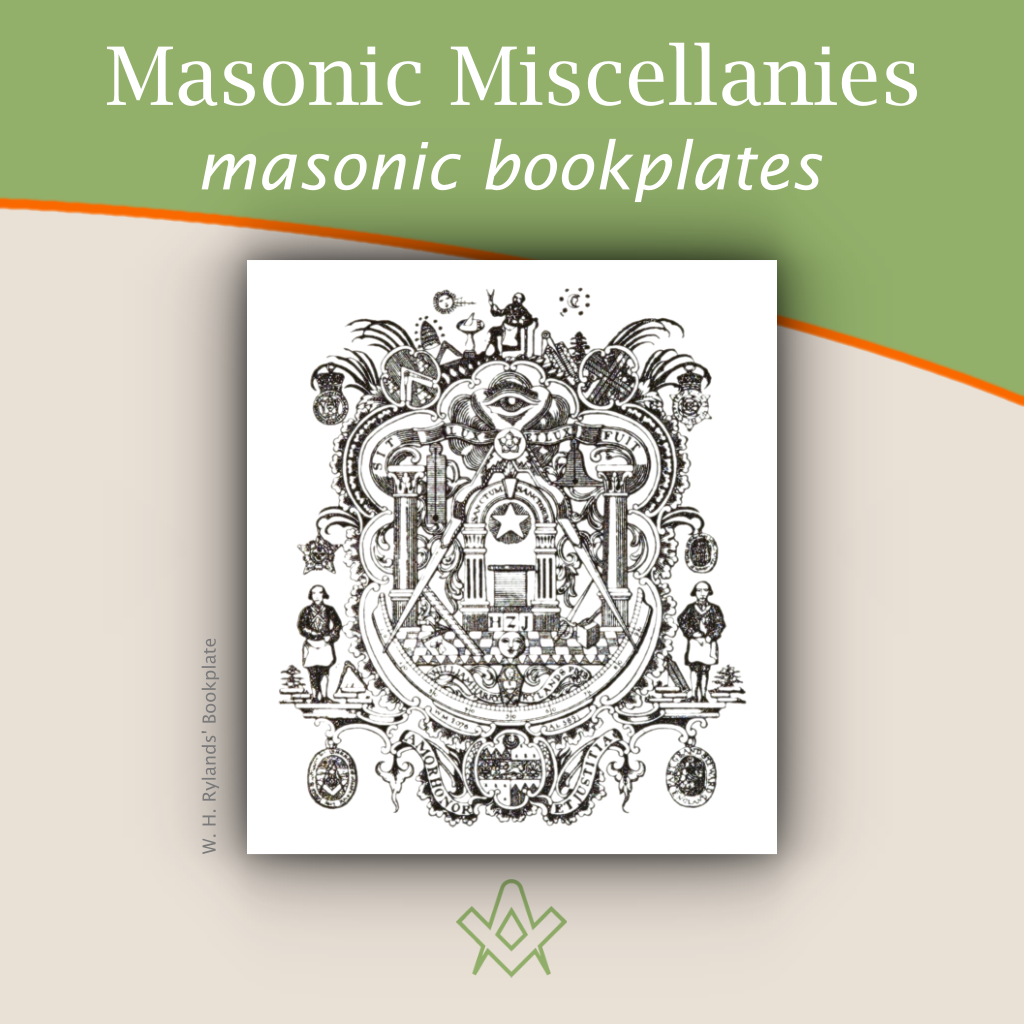 As is often the case when putting together The Square, I find all manner of interesting tit-bits when researching some other entirely different sub-section of Masonic history.

This month I stumbled over an intriguing little book on the subject of ‘Masonic Bookplates’. Not something that I expected to find but evidently was of great interest to those early collectors of bookplates, Masonic or otherwise.

So, why use a bookplate? And what is Ex Libris?

A bookplate (or book-plate, as it was commonly styled until the early 20th century), also known as ex-librīs (Latin for ‘”from the books (or library)”‘), is a printed or decorative label pasted into a book, often on the front endpaper, to indicate ownership.

Bookplates bear a motif relating to the book’s owner, such as a coat-of-arms, crest, badge, motto, or a design commissioned from an artist or designer. The name of the owner usually follows an inscription such as “from the books of…” or “from the library of…”, or in Latin, “ex libris”. Bookplates are important evidence for the provenance of books.

Did you know? The earliest known book marker\label was that of Amenhotep III and Queen Tiye c. 1391−1353 BCE… 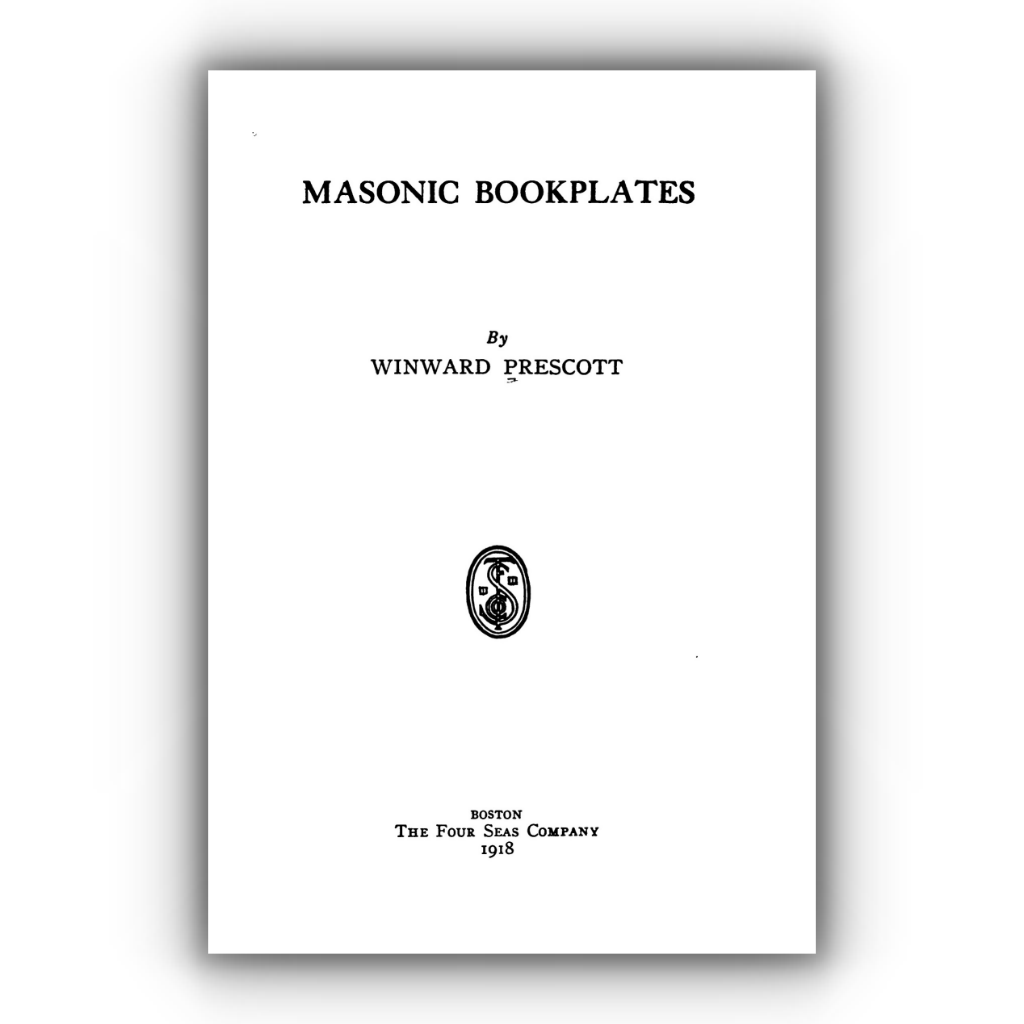 The book is entitled (unsurprisingly) Masonic Bookplates, compiled by Winward Prescott in 1918, and published by The Four Seas Company, Boston. 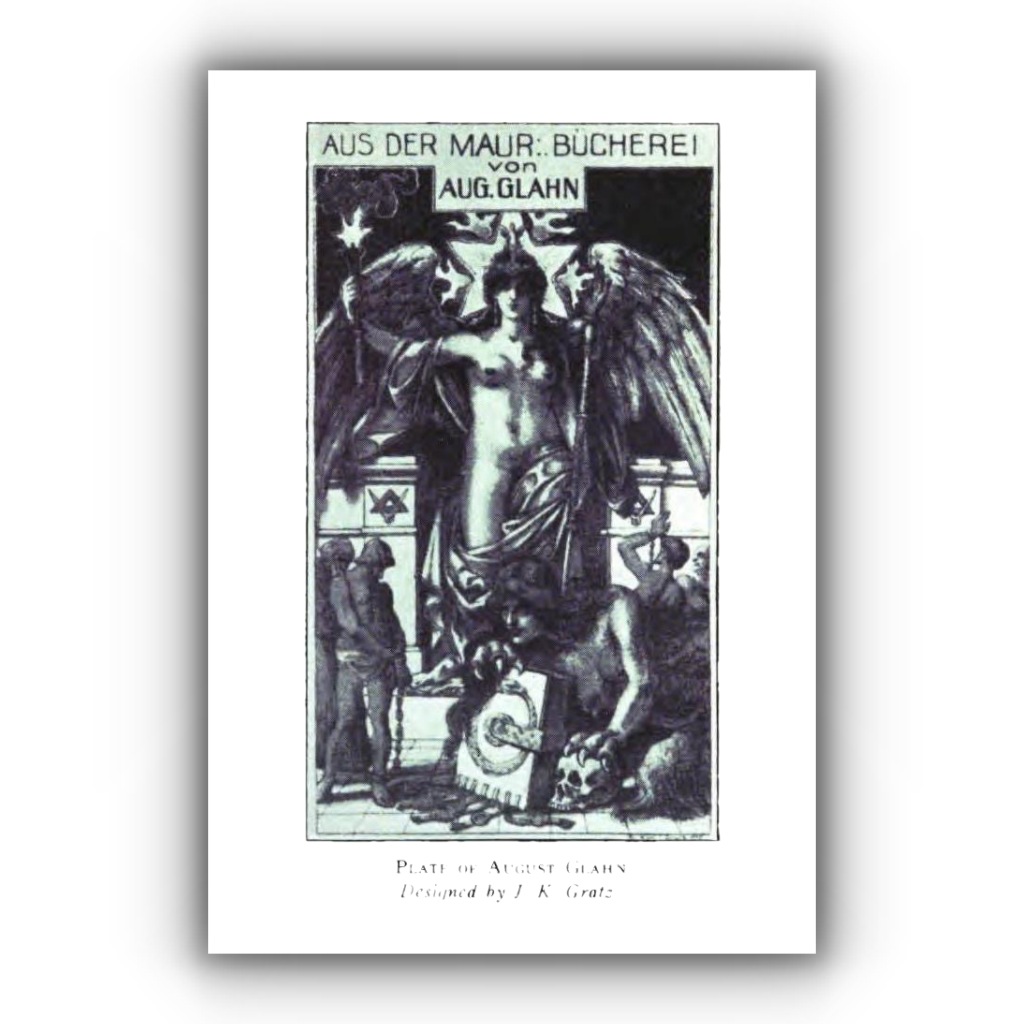 The Frontispiece: Plate of August Glan.

Prescott begins his 28 page booklet by mentioning two other books on the subject:

‘Masonic Book-Plates are of course primarily interesting to members of the Craft who can understand the various signs and symbols appearing upon them.

Yet these plates are interesting to Book-Plate collectors in being among the rarest of Ex Libris specialties.

Yet combining the lists of plates in these two brochures and adding to them the plates in my own collection I can here list but a few over one hundred and seventy Masonic Ex Libris.’

Prescott begins with a brief explanation to the profane:

Before taking up the different emblems found on Masonic Book-Plates it might be well to explain that the initiate rises through the various stages of Freemasonry by a series of steps called degrees which the member may take in sequence as his interest leads him to enter into the work of the Craft.

The highest degree is the 33d which is conferred as an honor upon prominent Masons.

Together with and accompanying these steps or degrees, which may be called the main road of Masonry, are various side paths or divisional bodies such as the Shrine, the Knights Templar and others. 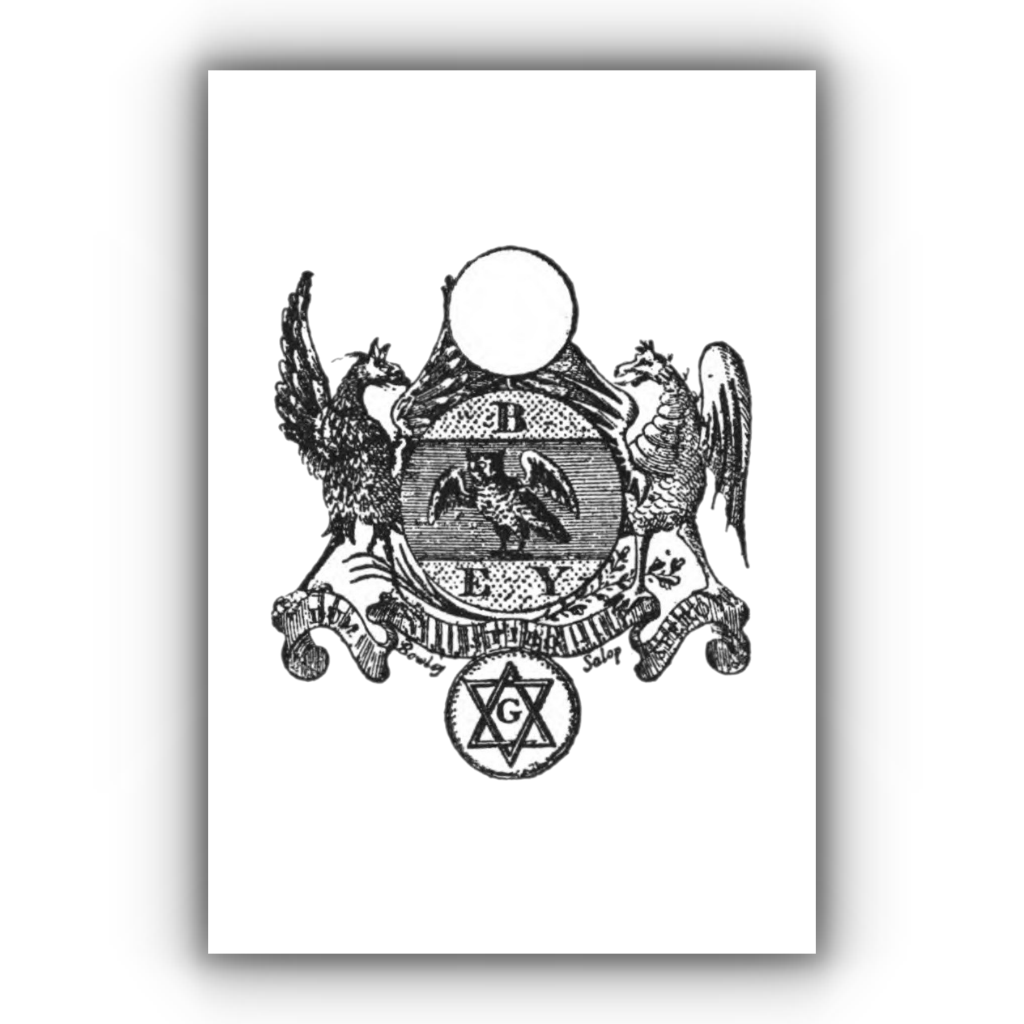 There are in some cases special symbols to denote these bodies; other emblems are used for Masonry in general.

To begin with — the most common mark is the general Masonic symbol of the square and compasses between which there is often placed a G.

Then there is the key-stone bearing a lettered circle, and the all-seeing eye sometimes placed in a triangle. 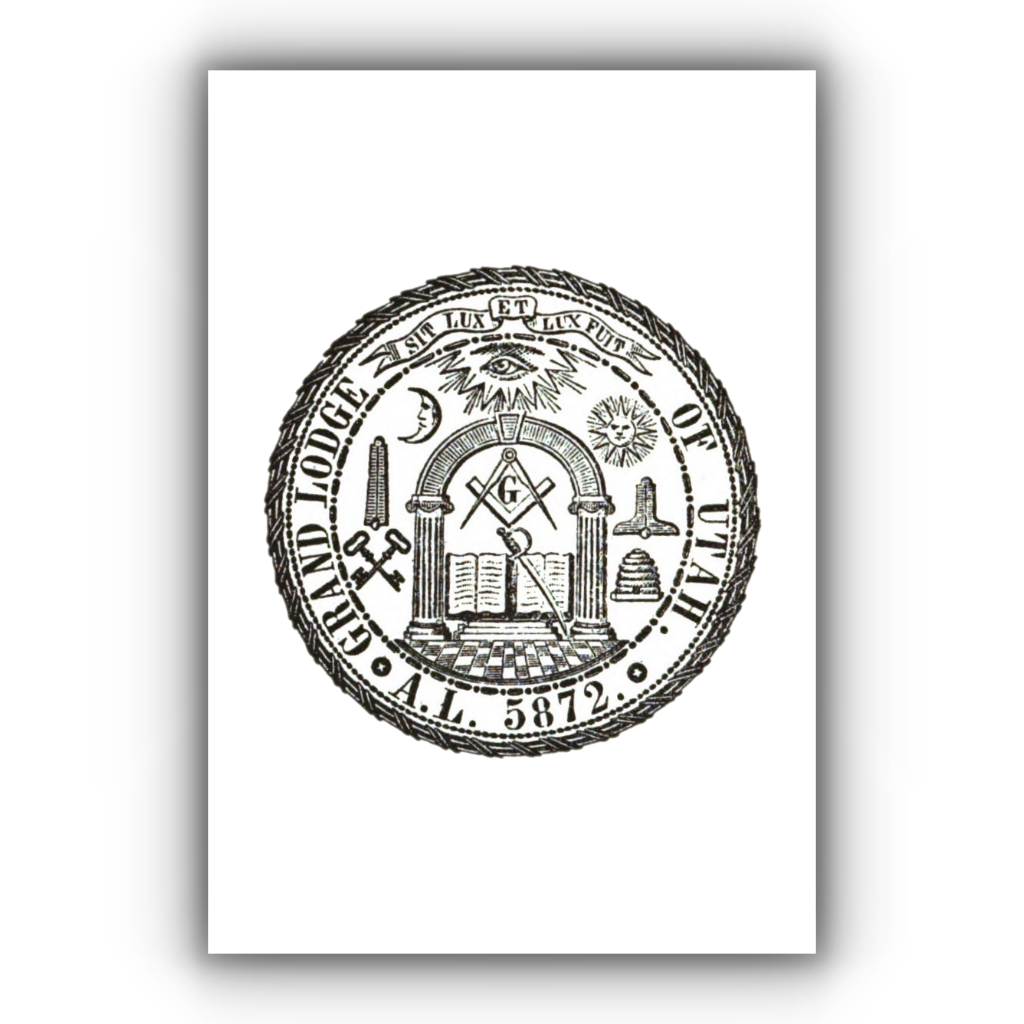 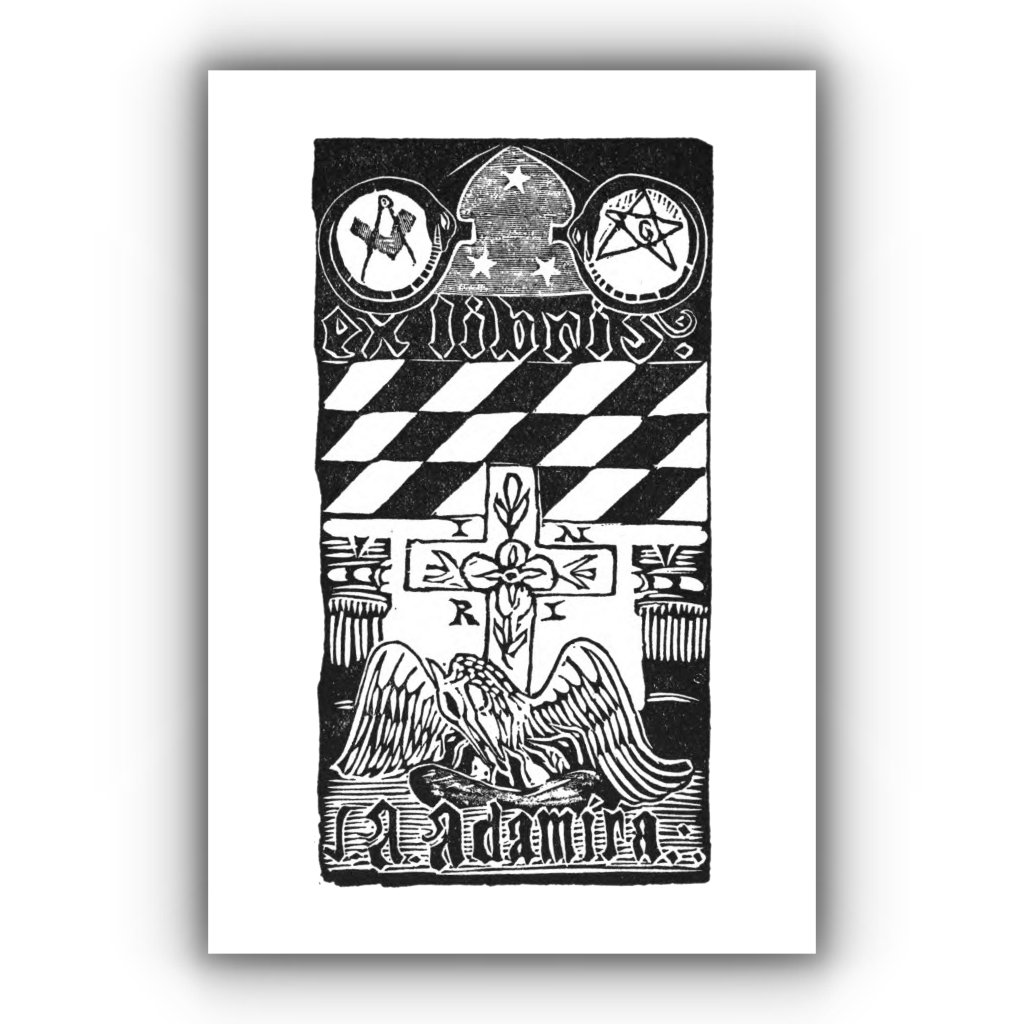 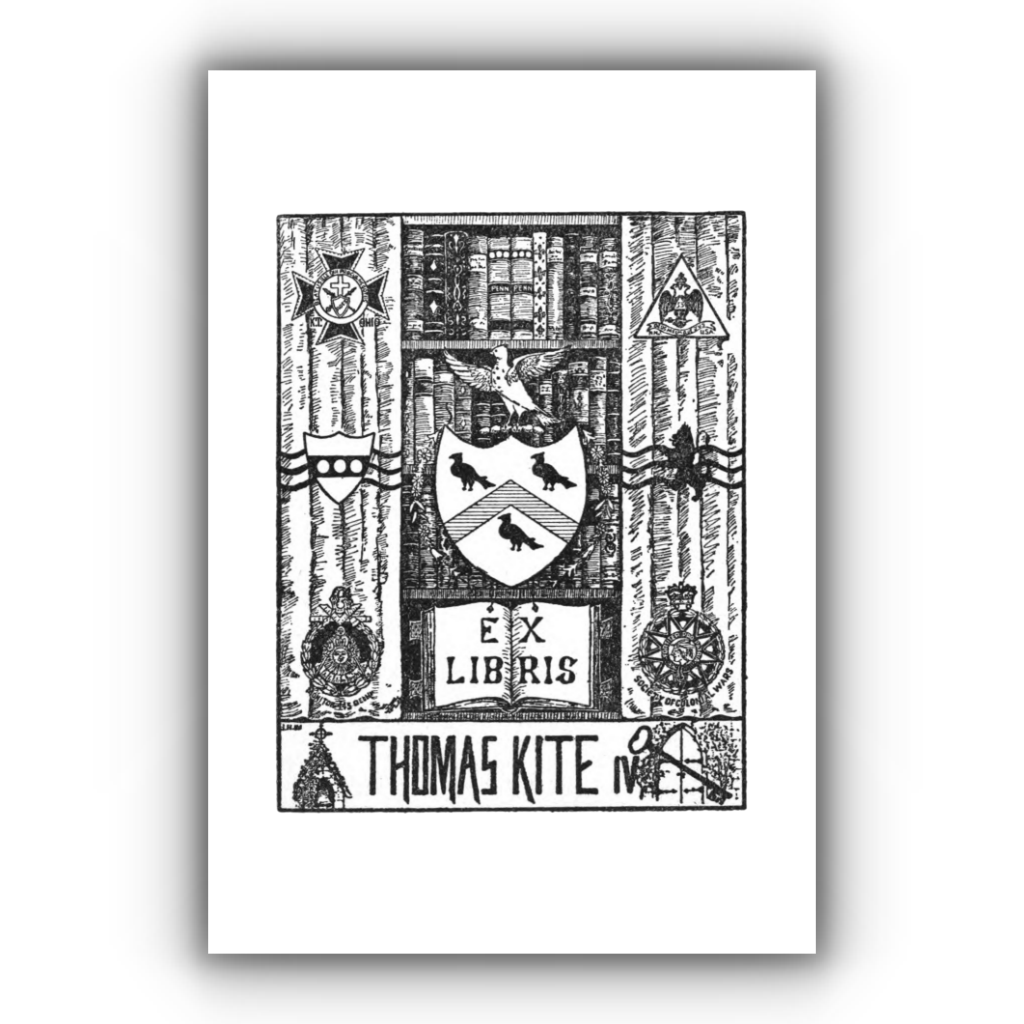 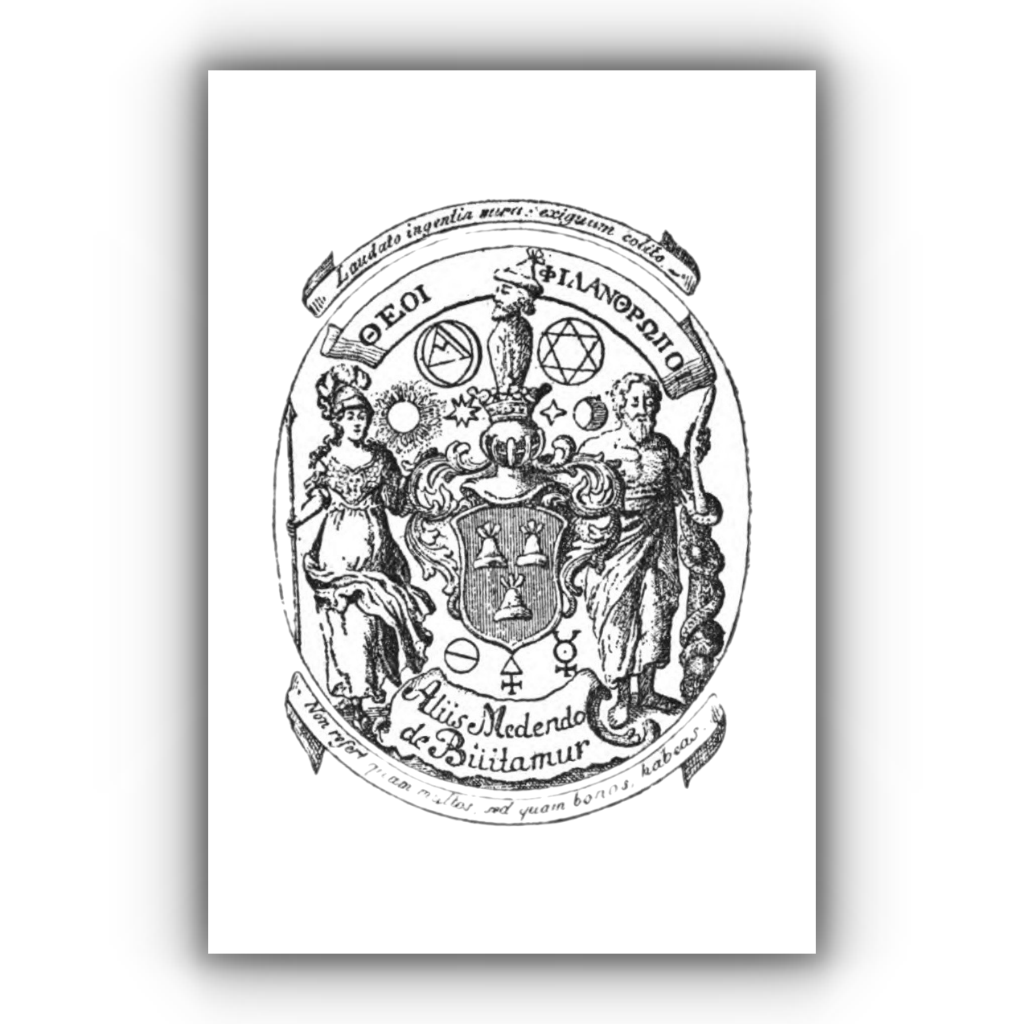 Various geometric figures are used, for instance the triangle, the circle, the cube or perfect ashlar, the five-pointed star or pentalpha, (See P-I, plate of L. M. Taylor) and the six pointed star formed of two triangles as in the Ruddiman plate.

At times a plate will have some of the architectural marks of a lodge room, such as the altar or the two columns with their spheres one for the earth and the other for the heavens.

A very interesting example of an altar with the beam of light falling on it from above is seen in the old plate of W. Chapman. 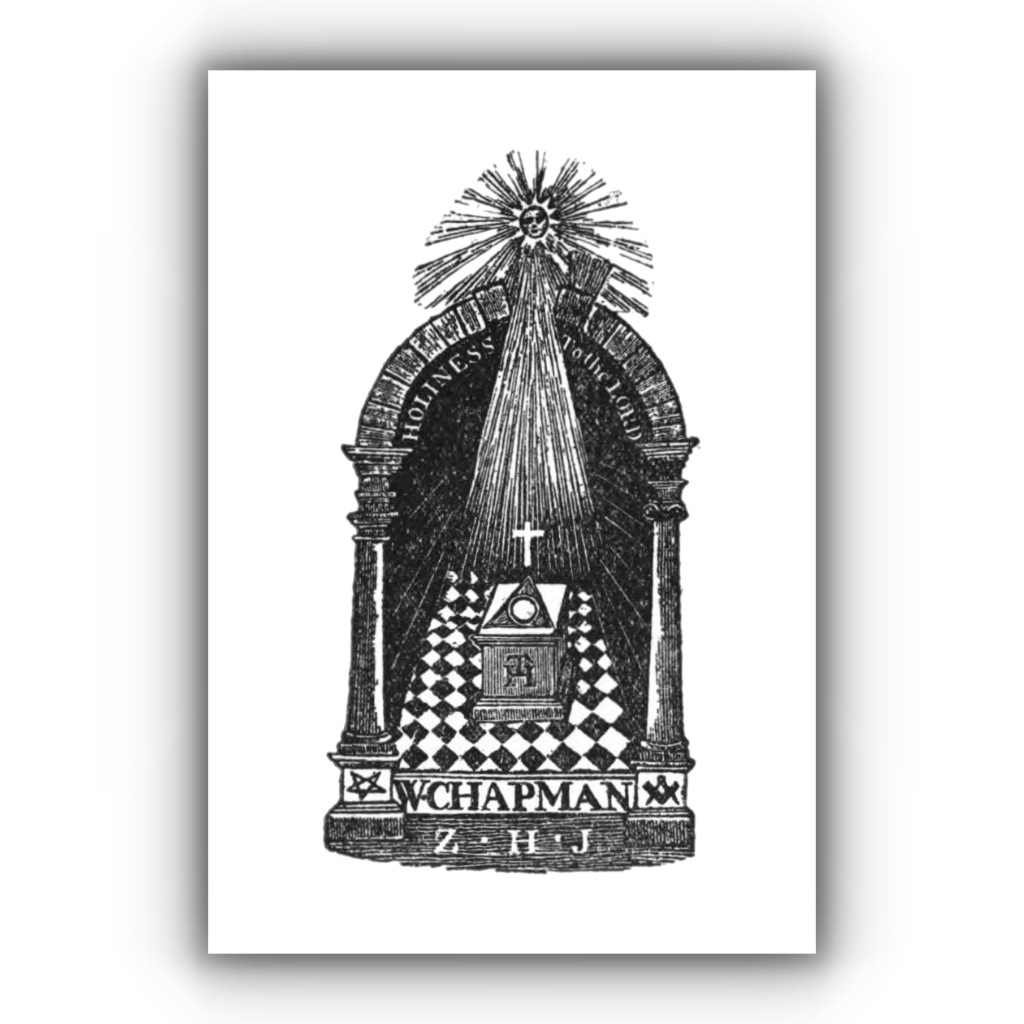 ​Among the special emblems for the subsidiary Masonic bodies are the cross and crown (See plate of Dr. Egbert) ; the scimitar, crescent and star, the mark of the Shrine; the Maltese cross of the Knights Templar; and the crowned double eagle of the Scottish Rite bodies.

It is for these emblems that the Book-Plate collector must look. 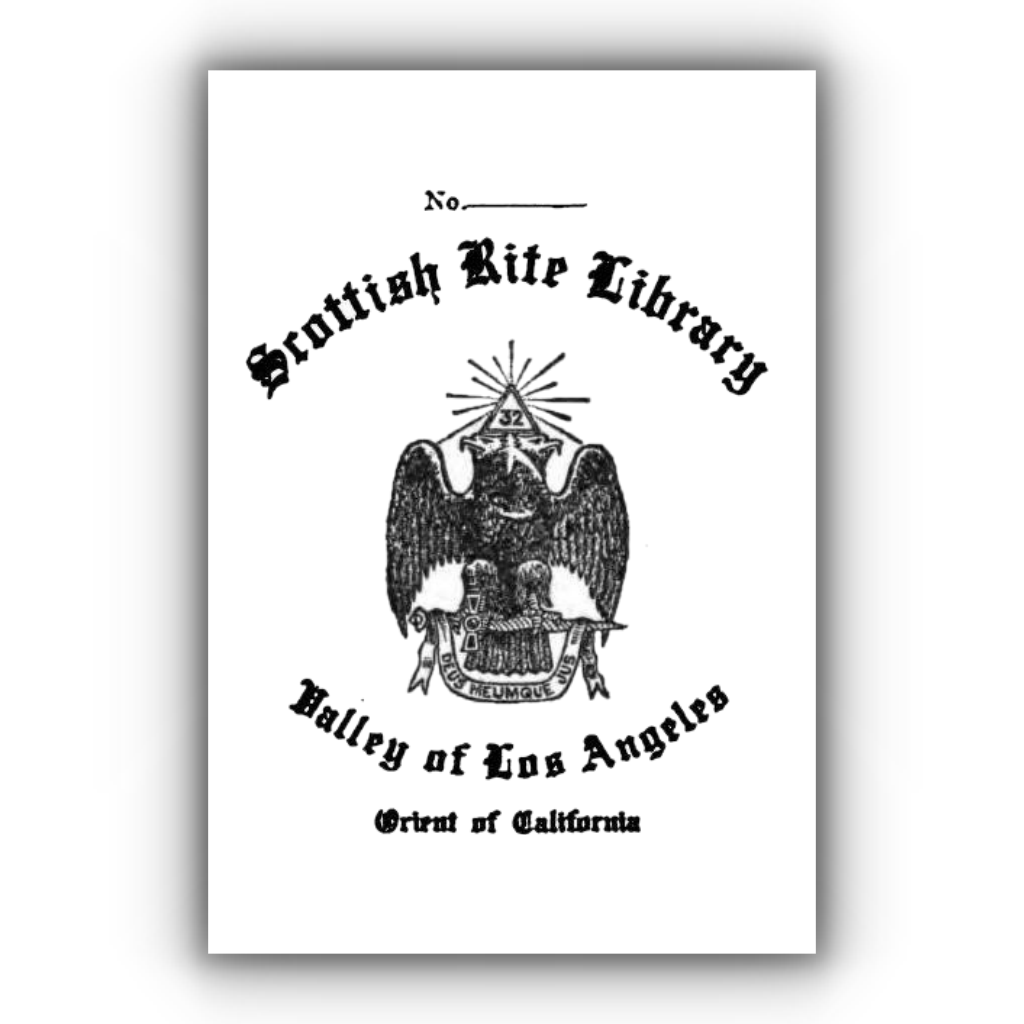 Some plates will be found to be almost entirely Masonic. That of W. H. Rylands has all sorts of emblems and symbols — the layman might almost get a liberal education in such matters by a study of this plate. 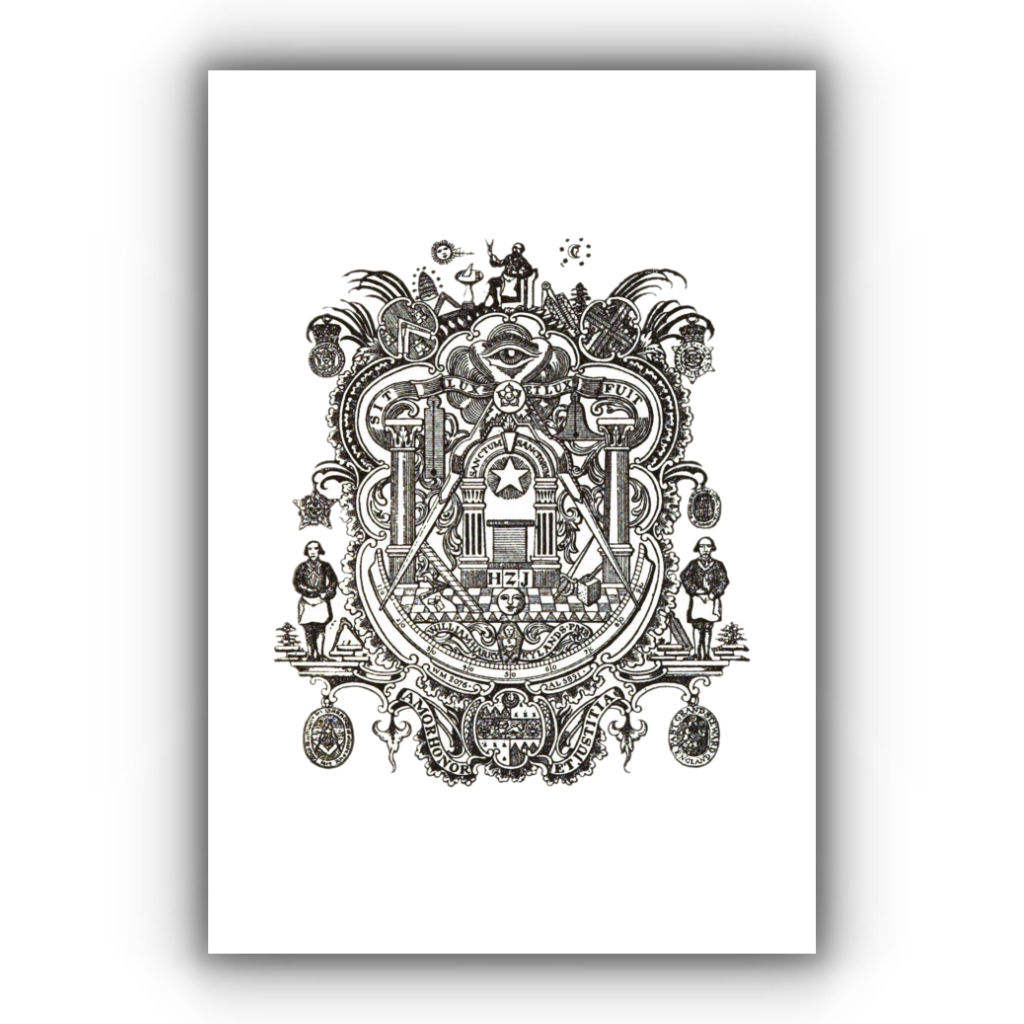 Another of the same kind is that of the Supreme Council 33d by W. P. Barrett. This is perhaps the most elaborate Masonic Book-Plate in existence and seems to contain all the insignia of the Scottish Rite. 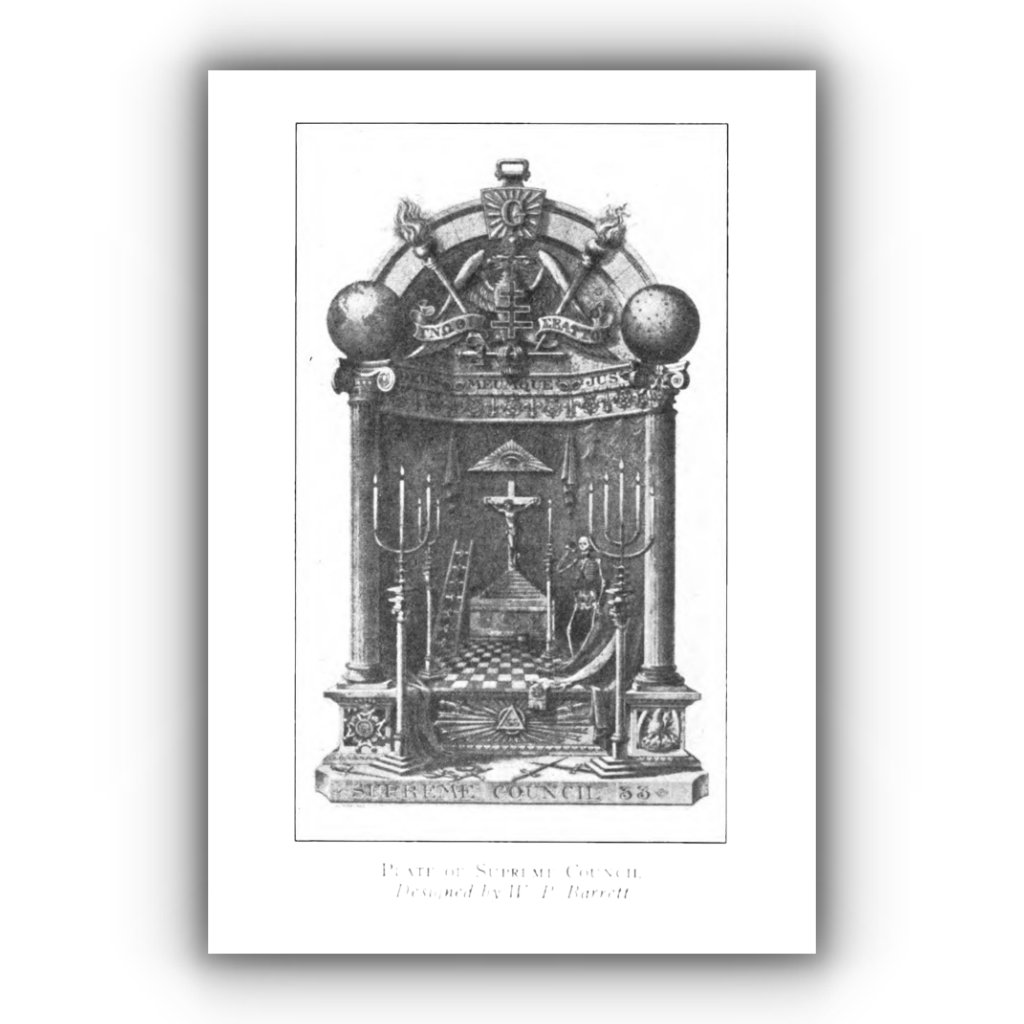 Paul Revere was an earnest Mason. He was initiated in the Lodge of St. Andrew in 1760, and held various offices.

“When the schism in St. Andrews arose, and the Lodge was nearly equally divided on the question whether it should renounce its allegiance to the Grand Lodge of Scotland, and hold under the Massachusetts Grand Lodge, his patriotic feelings made him the leader of the seceders from St. Andrews who united in forming the Rising States Lodge, taking its charter from the Massachusetts body.

He was also junior Warden of the Royal Arch Lodge, out of which grew St. Andrews Royal Arch Chapter.” 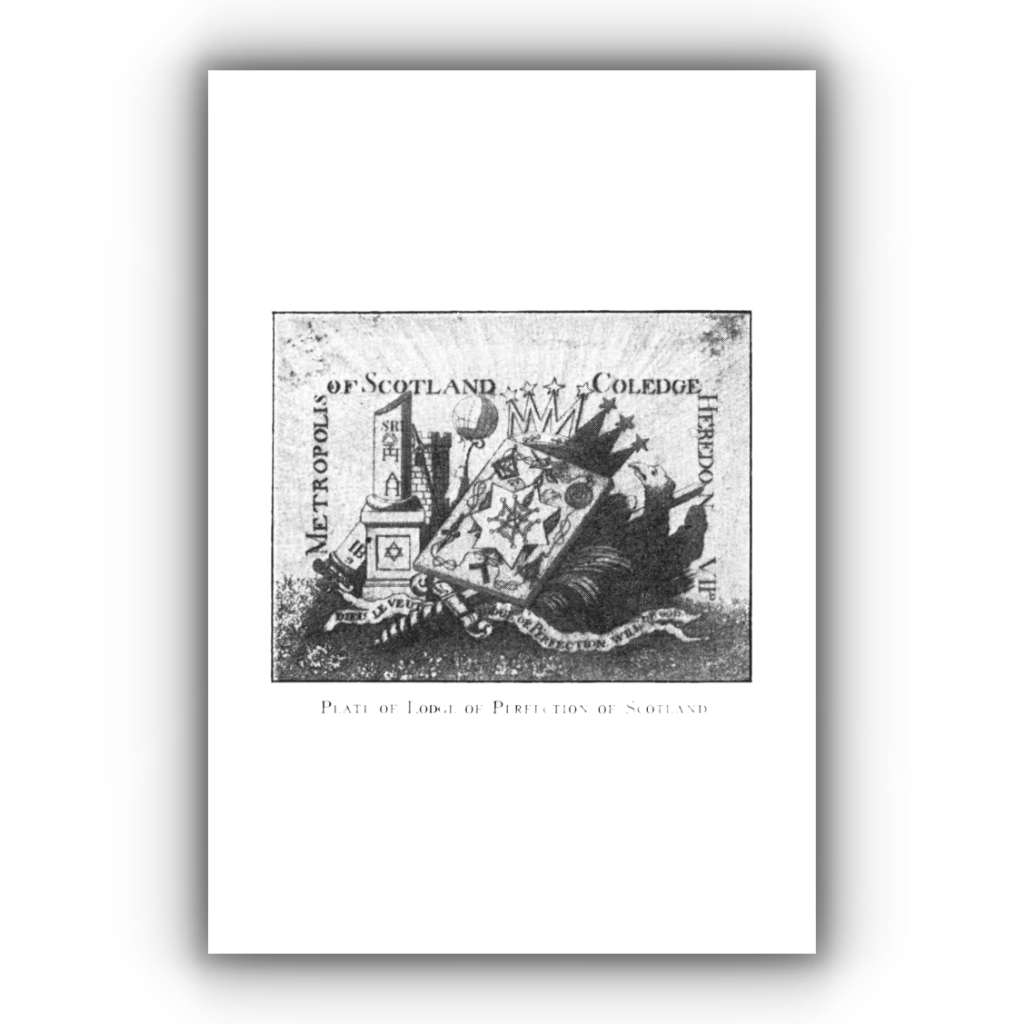 Some light in regard to the feeling at times held towards Freemasonry may be seen in the career of Silas Ketchum.

Born in Barre Vt., in 1835, he married in 1860 and worked his way through the Bangor Theological Seminary by means of his trade of shoemaker at which he had been apprenticed before his marriage.

After graduating he became pastor of a church in Wardsboro, Vt., where he remained for two years. In the library of the Grand Lodge of New Hampshire is a farewell sermon delivered at Wardsboro on Sept. 24, 1865. on Sept. 24, 1865.

On the inside of the cover of this Mr. Ketchum wrote :

— “In Sept. 1865 I was raised to the sublime degree of a Master Mason, in Mt. Lebanon Lodge, Jamaica, Vermont. For this crime I was dismissed from the church in Wardsboro, of which I had been pastor two years, and took my leave with the following sermon. Silas Ketchum.”

His Book-Plate shows four symbols of his life’s interests — the square and compasses for Freemasonry, the awl for his early trade, the bible for his ministry, and the pen for his antiquarian work. 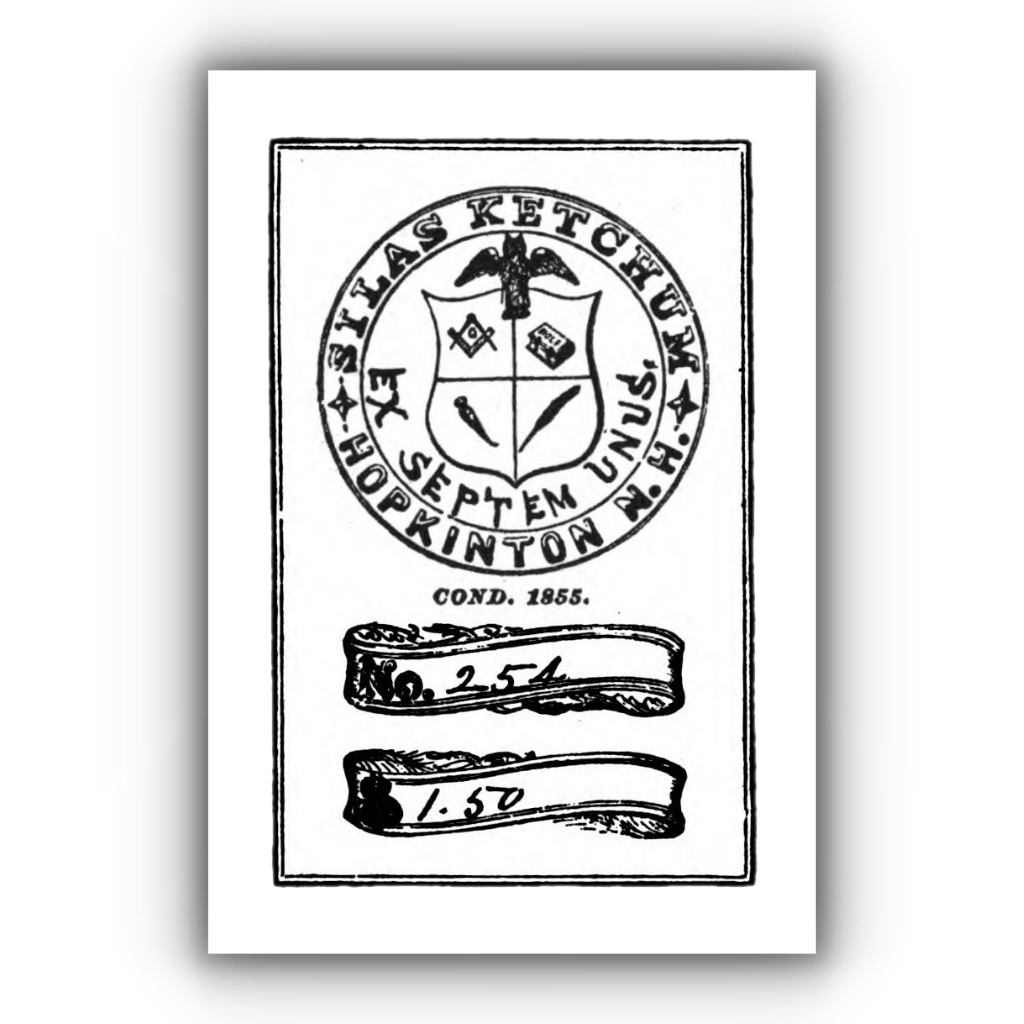 Winward Prescott then includes a very long list of Masonic bookplates that he has discovered, and concludes that:

It is hoped that these few notes and comments may start some Book Plate collectors into trying to gather a few Masonic Ex Libris for a special collection.

The list which follows is of course not at all complete, and I hope that any collectors who may happen to find Masonic plates which are not here listed will be kind enough to bring them to my attention.