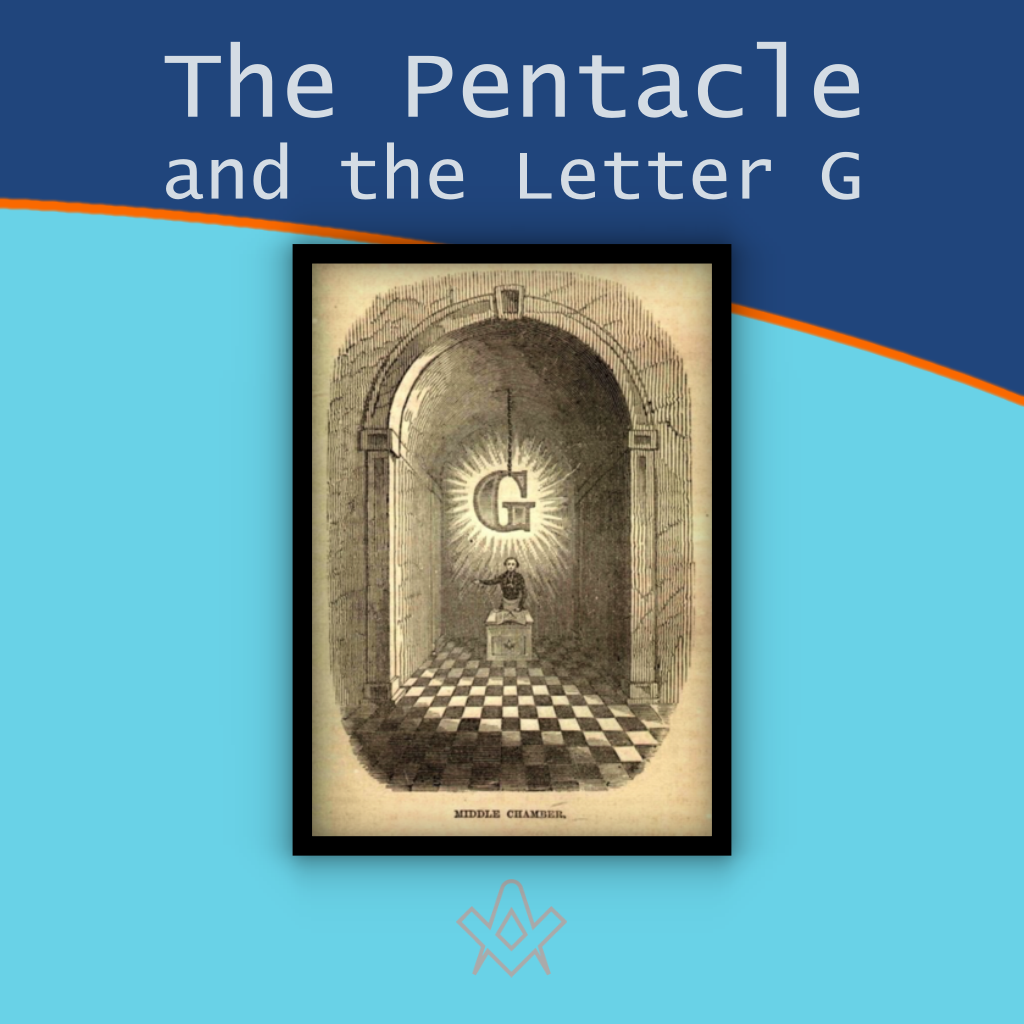 In the centre of the ceiling in every well-decorated Lodge room there should be a pentacle having within it the letter ‘G’.

This will usually be found in provincial Lodges, but unfortunately has almost entirely dropped out of use in London.

This is a great pity, as thereby the very ritual of the second degree becomes untrue.

This pentacle should be above the point within the circle on the floor.

The pentacle, which becomes a five-pointed star when the triangles are filled in, has many significances, and is an old magical symbol.

In order not to befog our readers, we will in this book concentrate on but a few of its most important meanings, leaving those who desire further light to delve deeper into the lore of symbolism.

right: Five pointed star when pentacle is filled in.

The pentacle on the Continent is used as a jewel for M.M.s, and this use, which is old, has not entirely been forgotten here, as is shown by its being employed even now in Masonic charms.

In Scotland it is the jewel of the Excellent Master, for reasons which do not concern an ordinary Craft Mason, but the essential fact which must be borne in mind is that the pentacle in the main stands for man, and the double triangles of the R.A. for God.

Despite this undoubted fact we find the ‘G’, representing God, the G.G.O.T.U., in the centre of the emblem for man.

This apparent contradiction should make us realise the exact lesson of the second degree, wherein the sacred symbol is discovered.

The inner meaning of the second degree, as I have pointed out in the F.C.’s Handbook, is that the God we seek is within us. 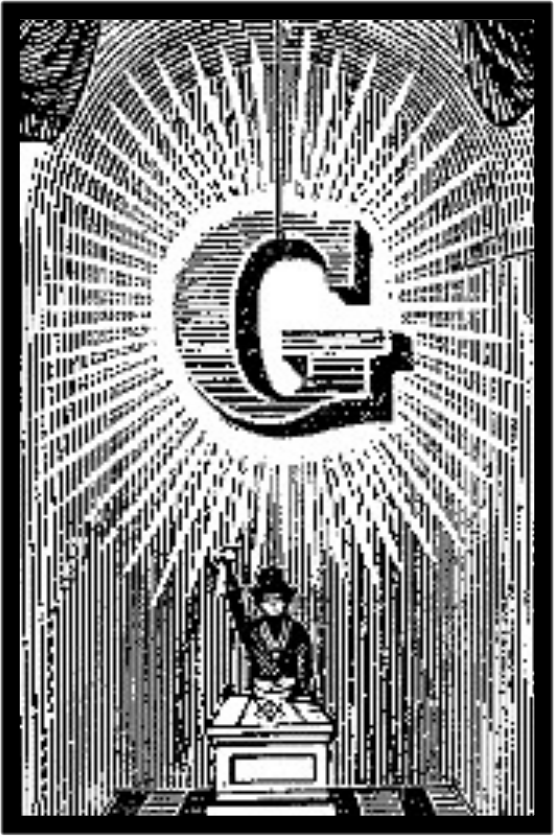 In short, that Divine Spark which, although hidden in man, is never entirely separated from him.

In the wider sense the G.G.O.T.U. is the Preservative aspect of God, the Second Person of the Trinity, Who became incarnate in flesh and dwelt among us.

Thus we see there is an intimate connection between the star that rose at Bethlehem and the pentacle, more especially when properly depicted on the roof of a Lodge with the letter ‘G’ within it.

This naturally leads us to consider the full significance of the letter ‘G’.

I have quoted Sir John Cockburn’s opinion in other works of mine, namely that the letter ‘G’ was originally depicted in mediæval Lodges by a square. 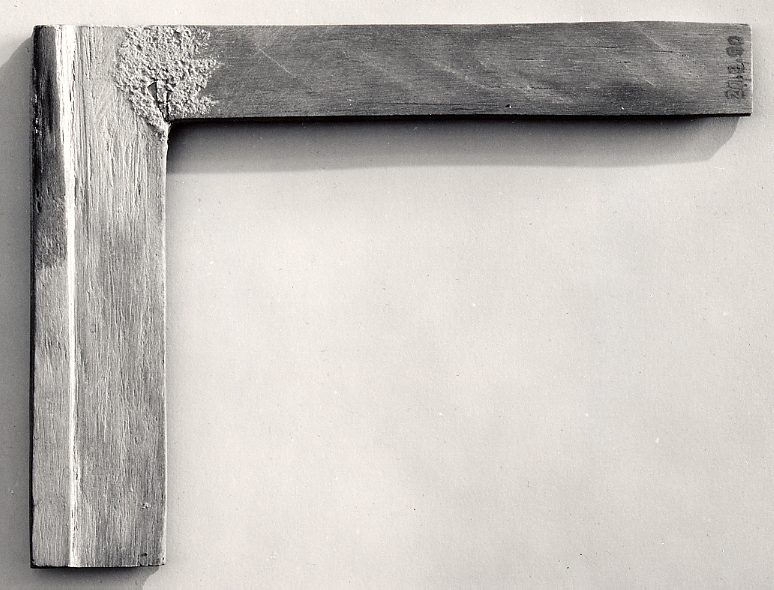 Ancient Egyptian try square from the 20th century BC. Discovered in 1920 in the tomb of Meketre near Thebes.

The gallows square seems always to have been regarded with peculiar veneration by the masons, because not only was it an important working tool with a symbolic meaning already described, but it is also the shape of the gamma or ‘G’ in the Greek alphabet, as well as in the ecclesiastical script used in mediæval Europe. 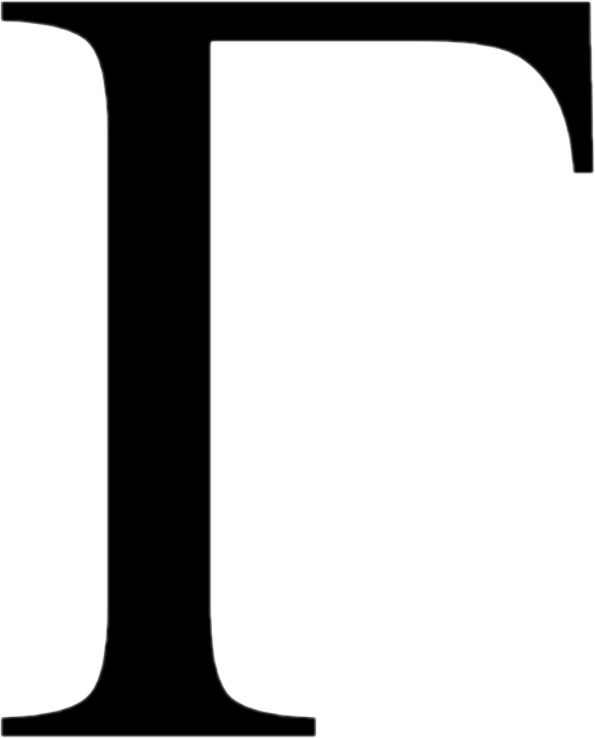 Thus, this symbol stood alike for God and His great characteristic ‘Justice’.

References to the identification of the square with the letter ‘G’ are found in several old rituals, as Sir John has repeatedly pointed out.

I have previously in this book dealt at some length with the various meanings of the square, all of which must be borne in mind when considering it as identical with the letter ‘G,’ but we must also correlate this emblem with the description of what the F.C.s discovered when they went to receive their wages in the Middle Chamber; as related in the lecture on the tracing board.

We are there told that their attention was peculiarly directed to certain Hebrew characters, which are usually depicted in our Lodges by the letter ‘G’.

These letters were Yod He Vau He, or JH V H, standing for Jehovah.

Bearing in mind the substitution of the square for ‘G’ we are justified in assuming that originally there were four squares in place of these four Hebrew letters in a medieval Lodge, arranged in the form of a swastika.

That this is not idle fancy on the part of the author is proved by the fact that in an Operative Lodge even to-day a swastika is deliberately constructed out of four gallows squares, as part of a ceremony of opening a Lodge, and these are placed on the V.S.L., which rests on an altar in the centre of the building. 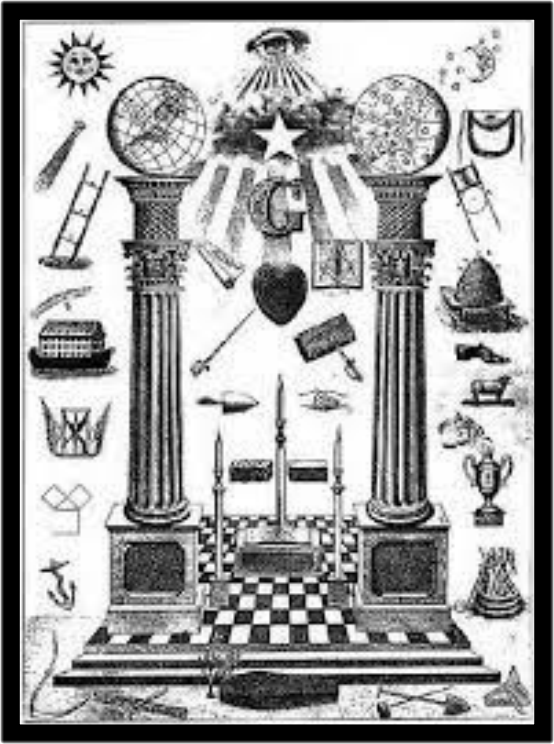 When the altar was removed and the Master’s pedestal used instead, some new position had to be found for the emblem denoting God.

What was more natural than to place it on the roof, and for the sake of convenience, and for the benefit of ignorant Brethren, to replace it by the letter ‘G’?

The full inner meaning and its close connection with the ceremony of the second degree have already been explained by me at full length in the F.C.’s Handbook, and it would not be fair on the publishers of that work to reproduce in full all that I there wrote; therefore, those brethren interested in the matter should look it up in that work.

Briefly, however, it may be said that the whole meaning of this emblem is connected with the intimate relations which exist between the Divine Spark within, and the Second Person of the Trinity, and knowledge of these facts is absolutely essential for full comprehension of the real meaning of the third degree.

I do not consider that the second degree is, as some would pretend, an afterthought, or a late addition to the Masonic ceremonies.

Without it the symmetry of Craft Masonry would disappear, and the third degree itself would lose half of its meaning.

For these reasons I consider that the ‘G’ within the pentacle is one of the most important emblems of a Craft Lodge.