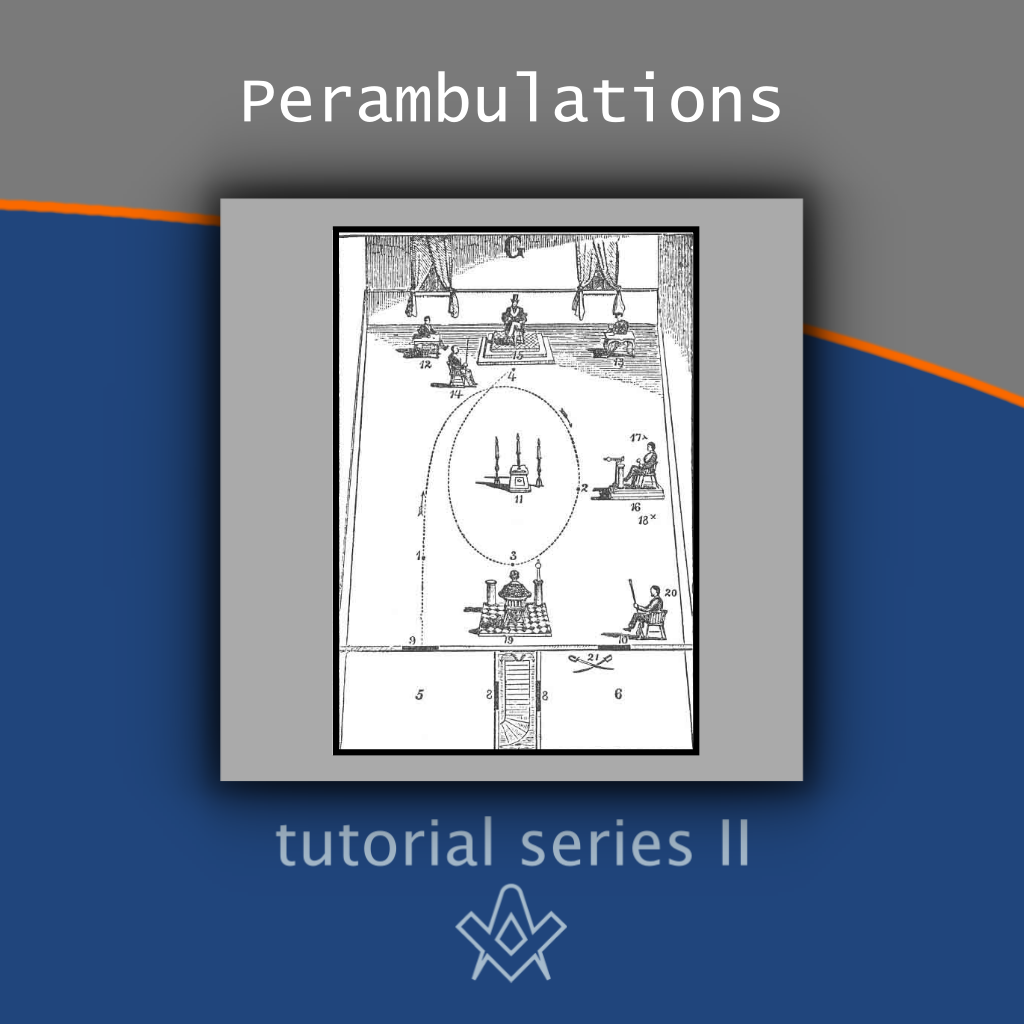 Reflecting on the time I was a Deacon I remember that I was quite formal and military in the way I escorted the candidate around the lodge in each of the degrees.

As I was from a service background I thought that such formality was expected and gave dignity to the ritual.

Stepping off with the left foot and almost slow marching around the periphery of the Lodge floor, straight back, wand in hand, held delicately between my fingers.

That badge of office signalling the arrival of the ‘Messenger’ and the importance of his message. Upon reflection was that the right attitude to have?

When we look at the ritual book the deacons are told to ‘perambulate’ with the candidate.

So what does this really mean? As always I look to the dictionary to tell me the meaning of words and ‘perambulate’ is:

The Cambridge Dictionary – To walk about for pleasure.

Collins Dictionary – To walk around in order to inspect.

Let’s take these definitions and apply them to our ritual.

To walk about for pleasure.

When the candidate is escorted around the Lodge floor what is happening?

He is being guided along the chequered pavement which signifies his chequered existence upon this earth by a friend who will see that he does not come to harm and someone in whom the candidate has put his trust.

The steps taken are therefore steps of friendship and should be considered as such by the Deacons.

It is important that prior to the ceremony the Deacons should introduce themselves to the candidate to put his mind at ease and be that friendly, trusted, walking companion.

To walk around in order to inspect.

There are two aspects to this definition when applying it to our ritual. The first is for the brethren to inspect the candidate whilst on his journey to ensure that he is;

“properly prepared and a fit and proper person to be made a Mason – a Craftsman – a Master Mason”.

The other aspect is for the candidate to examine his boundaries. The boundaries of good and evil.

In English Law the historical meaning to ‘perambulate’ was to establish the ‘bounds’ of the land by walking around it and so that law has been ritualized in our ceremonies.

Why walk around the Lodge clockwise? 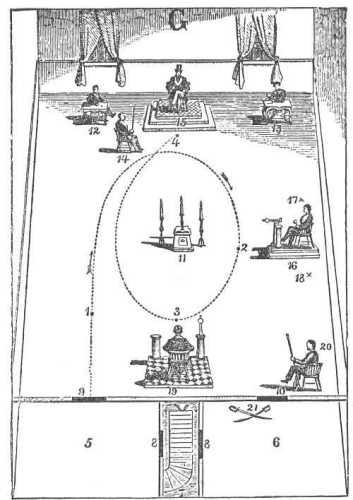 According to Bernard E. Jones in his book ‘Freemasons Guide and Compendium’ we should not use the word perambulation for in Latin that means “to walk through”, we should use the word circumambulation which in Latin means ‘walking all around’.

How language has changed from the original Latin to that of English Law.

However, Jones goes onto inform us that one of the most ancient rites going back thousands of years was to circumambulate ‘sunwise’, that is in the direction of the sun, or clockwise. In religions of various ages the practice of walking around a sacred shrine three times in a ‘sunwise’ direction was closely observed.

Durandus, a French Benedictine monk and author in the thirteenth century, stated that such ‘circumambulation’ was being practiced by bishops of the Christian church in his time.

So the rite of ‘walking all around’ has been adopted by Freemasonry and is a rite that ‘stretches back to probably the dawn of civilisation’.

During the candidate’s perambulation’ of the Lodge he is stopped at each corner to make a turn and he then starts again stepping off with the left foot making each side of the Lodge floor separate and distinct.

On each corner, on the Lodge carpet, is illustrated a tassel. Each of the four tassels represent a virtue.

“Prudence to direct you, Fortitude to support you, Temperance to chasten and Justice to be the guide to all your actions”. 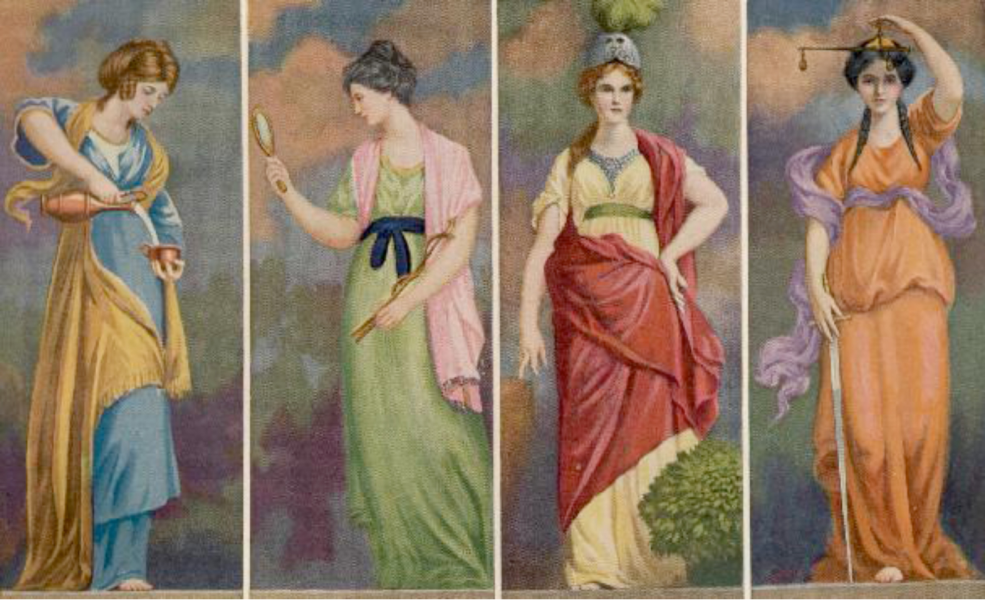 Prudence is “the ability to govern and discipline oneself by the use of reason. Shrewdness in the management of affairs. Skill and good judgement in the use of resources and cautious or circumspect as to danger or risk”. Merriam -Webster Dictionary

Fortitude is “the strength of mind that enables a person to encounter danger or bear pain or adversity with courage”. Merriam -Webster Dictionary

Justice is “fairness in the way people are dealt with and a conformity to truth, fact or reason”. Merriam -Webster Dictionary

It is, therefore, of the utmost importance that the candidate is made aware of the reason for stopping at each corner at the earliest possible convenience so that he may understand the purpose of “squaring” the Lodge.

Why do Masons start off with their left foot?

There is much conjecture on this point and I have found no definitive answer. However, there is a paper written by Br. Georges L.C. Baekelmans and T. V. Srinivasan that gives four possible answers. I recommend you take time to read this paper.

Their first theory relates to the Fellowcraft ascending the winding staircase.

Their second theory was as a combative stance giving stability for the right hand to strike. They likened it to the combative Vedic Prayer:

Their third theory is given by Brother C. W. Leadbetter in his book ‘The Hidden Life in Freemasonry’.

He puts forward the concept that the left foot is nearest the heart and symbolizes ‘intuition’ and the right foot ‘the intellectual faculty’.

He goes on to say that in occult matters intuition always takes precedent over the reasoning process.

Their fourth and what they believe is a more genuine theory is taken from the ‘Book of the Dead’ relating to an occult group that worships the Ancient Egyptian Gods and is explained thus:

“The left foot is advanced to represent the power of Isis. Isis is also known as the one to mark a new beginning.

The right foot is represented by Isis’s devine sister Nephthys, who stands for completion of action.”

Whichever is the right theory it is a great discussion point.

Each Lodge Preceptor will have his own way in which perambulations are made according to his own Lodge workings, but bear in mind the significance of why we do it.

A friendly walk as a guide with a Brother to establish his preparedness to advance further.

To accurately communicate a message given by the Worshipful Master and to establish the candidate’s moral boundaries.

So reflecting on my time as a Deacon, perhaps I was more concerned with the outward appearance than the friendship of the action.

Lodge of Union No. 38 Ritual Book.

Commentary on the Third Degree Charge

The Third Degree Charge invites the candidate to reflect on his life as both a ‘moral’ and ‘educated’ man, and to contemplate on what may be missing in his life. The ‘genuine secrets of a Master Mason’.