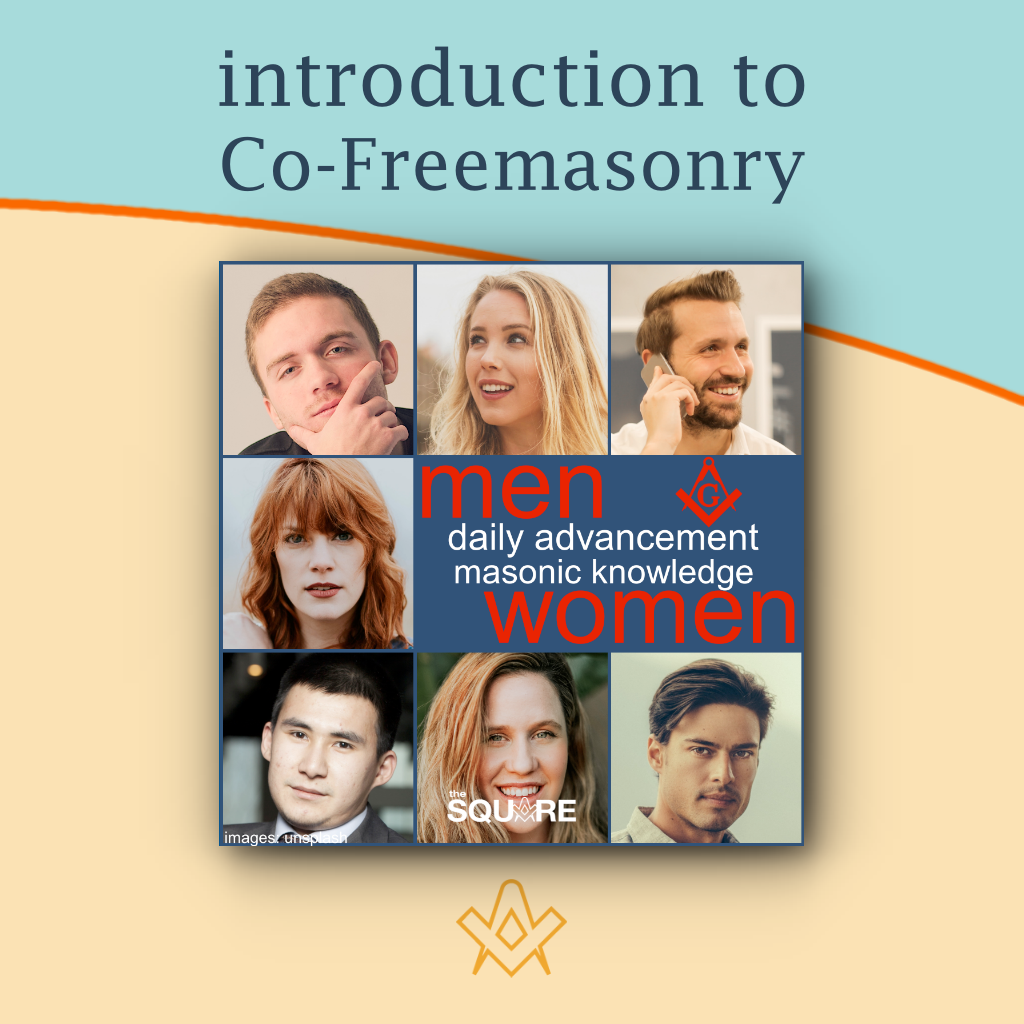 Co-Freemasonry is a form of Freemasonry which admits both men and women. It began in France in the 1890s with the forming of Le Droit Humain, and is now an international movement represented by several Co-Freemasonic administrations throughout the world.

Most male-only Masonic Lodges do not recognise Co-Freemasonry, holding it to be irregular, or clandestine.

Co-Freemasonry is not formally recognised by any of the larger male-only Masonic Grand Lodges in the US in as much as inter-visitation or other Masonic interaction is not permitted.

Certain Grand Lodges of Co-Freemasonry, those under Le Droit Humain, also follow the lead of the Grand Orient de France in removing references to the Supreme Being from their rituals and initiating atheists; this is a further point of separation from typical Masonic Lodges which hold belief in a Supreme Being to be a Landmark requirement.

Notwithstanding the prohibition of interaction in a ritual context, the United Grand Lodge of England, the oldest of the Grand Lodges, whilst not recognising Co-Freemasonry, states that it does hold informal discussions from time to time with Women’s and Co-Masonic Grand Lodges on issues of mutual concern, and that Brethren are therefore free to explain to non-Masons, if asked, that Freemasonry is not confined to men (even though this Grand Lodge does not itself admit women).

The Grand Orient de France did not initiate women for many years, but it does now, and it recognizes Masonic bodies that do. Thus, it allows visitation by women from those bodies.

The International Order of Freemasonry Le Droit Humain is a global Masonic Order, membership of which is available to men and women on equal terms, regardless of nationality, religion or ethnicity.

The Order is founded on the ancient teachings and traditions of Freemasonry, using Masonic ritual and symbolism as its tools in the search for truth.

On the individual level, the Order aims “to promote the progress of individual worth, without the imposition of dogma, or exacting the abandonment of cultural or religious ideas“.

On a collective level it works “to unite men and women who agree on a humanist spirituality whilst respecting individual and cultural differences“.

In contrast with other Masonic organisations which operate in national or state jurisdiction only, Le Droit Humain is a global fraternity with many Federations and Jurisdictions worldwide, each of which work the Scottish Rite from the 1st to the 33rd degree. The Order is administered by the Supreme Council, which has its headquarters in Paris. Within the International Constitution, however, member Federations have the freedom of self-governance.

The British Federation of the International Order of Co-Freemasonry Le Droit Humain was the first Federation to be established outside France, thus making the Order truly International.

On 26 September 1902, Lodge Human Duty No. 6 was consecrated by the Grand Master, The V. Ills. S. Marie Martin 33°, assisted by Officers of the Supreme Council, including one of the Co-Founders of the Order, Georges Martin 33°.

The first Master of the Lodge was Annie Besant, who would become the first Grand Commander of the British Federation.

The British Federation works the Ancient & Accepted Scottish Rite from the 1st to the 33rd degree inclusive.

Le Droit Humain is in mutual amity with the following Orders (meaning recognition is reciprocal and members can intervisit):