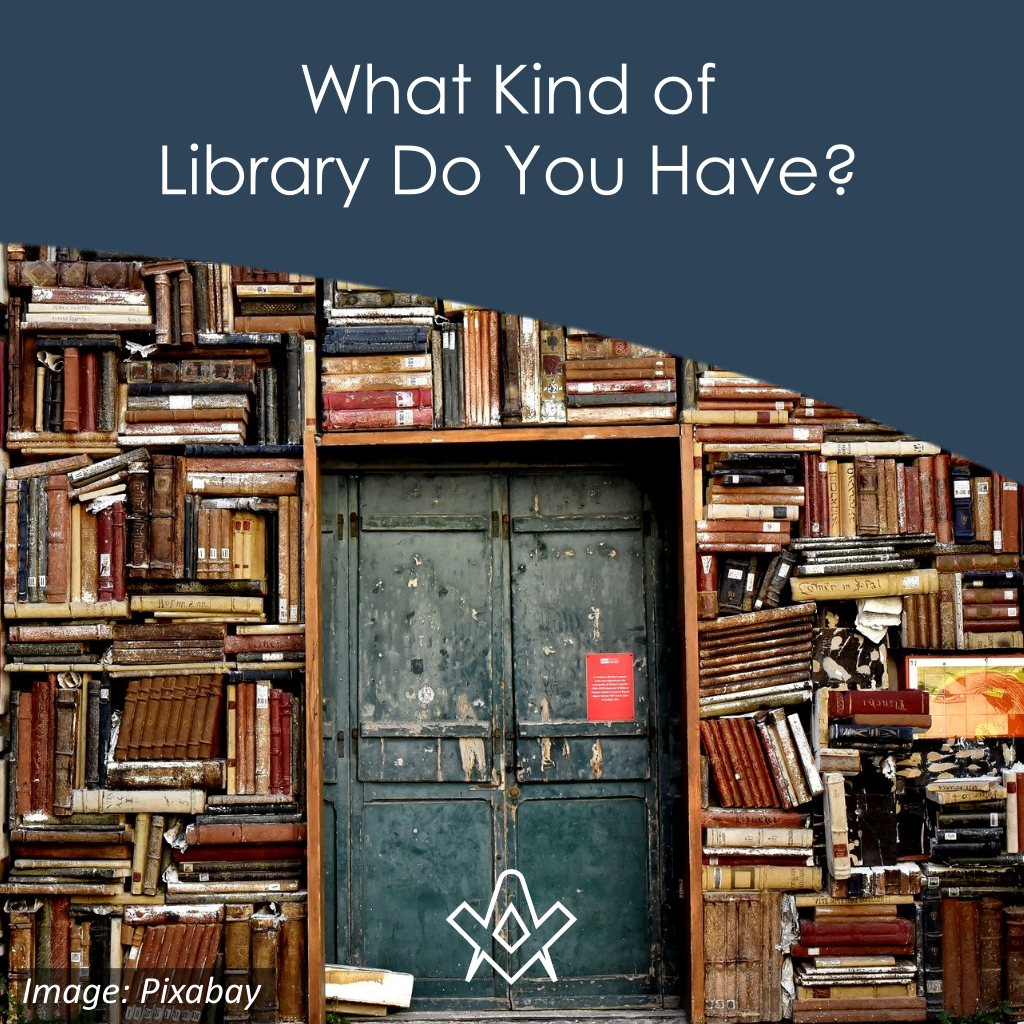 Many Brothers have no clue as to what kind of “Craft” library they actually have in their home or office. Most of these Brothers don’t care that they don’t know.

Take a good look at the typical Brother’s library.

On his shelves will likely be found code books that “letter out”, in some fashion or form, the rituals of his Jurisdiction. He will probably also have a book that is called a “monitor” that includes the non-esoteric portions of his Jurisdiction’s rituals. This book would include prayers, portions of lectures, and some aspects of his rituals that are not esoteric. He may have more of the same from other jurisdictions.

When the Brother was properly mentored and instructed, his shelf may include booklets prepared by his Grand Lodge. They usually include an introduction to his Fraternity, glossaries of the words and symbols used within each Degree along with explanations that support the ritual he went through.

It might include what to say to non-members when asked about the society and perhaps even something about how to join when interested.

If the Brother is a bit more involved in the organization, next to them may be the Digest of Law that is used to guide his membership.

If he was interested in the Society some time before his petitioning, he will likely have other books in a section dedicated to his efforts to learn more about it. Those books might include the many standard exposés and guides that can be found fairly easily by anyone desiring to find them.

They may also include books that describe the Society, its rituals, and its supposed history. Included in these may also be books about famous or well-known members of the Society and even historical events and political occurrences believed to somehow be connected with the Society and its members.

If he is hyper-enthusiastic about the organization and about other things, that are considered external to it by the majority of the members, he may have books that speculate upon the society’s origins and outside connecting interests. They may include on their shelves books that show supposed connections between the Society and Rosicrucianism, Cabbala, Alchemy, Mysticism, Biblical Characters, Knights Templar, Illuminati, Divinity, Religion, Underground Organizations, Secret Societies, Shadow or Off-World Governments, New World Orders, Shakespeare, Atlantis, Time-Travel, Ancient Astronauts and many others that have yet to be imagined or considered by the masses.

There are much more that could be added to this list. Officer training manuals and guides for one. Papers written about many of the above topics, some espousing past glories, some encouraging Brothers to reach out and reconnect and a few that delve into the minutest detail about some long forgotten organizational practice might also be added.

Books, papers and articles proscribed by Grand Lodge as forbidden may also be there, proudly displayed but easily concealed when necessary.

There is always something that can be added to the shelves when it comes to the Society.

However, when the Brother takes what Ritual points toward, and directs his attentions toward what it espouses, his book shelves are filled with entirely different books.

You’ll see books on personal development and self-improvement. He’ll have books covering finding one’s purpose and understanding what is most important in life and in business. He’ll have books on emotional, personal and business management, and building strong relationships and creating new ones. Time management and effective habit formation are also covered.

Books covering grammar, rhetoric and logic abound. Dictionaries with word roots and etymologies are included. Books covering archaic phrases, terms and obsolete words are also represented. These books also cover understanding symbols as they are represented in words, phrases, metaphor and allegory. Encyclopaedias covering symbolism, metaphors and slang are alongside them. Books offering translations from one language to another are most likely present.

Books covering mathematics are there too, and this area includes statistics and probability theory. Geometry, both classical and contemporary, are there too and include a strong presence of trigonometric studies. Music theory, to include numbers in time and how each are represented through numbers and symbols are there as well. Books on physics and astronomy are also represented. These books cover understanding symbols as they are represented in numbers, and numeric patterns.

On these shelves are also classics. These classics cover a wide range of philosophies, theologies, authors, cultures and histories (untethered to and untainted by “The Society of Free & Accepted Masons” literature and influences). They are each carefully and clearly represented and they have well-worn pages showing much use.

And personal journals and workbooks that track thoughts, frustrations, successes and overall progress are likely to be splattered among all the other books, placed carefully next to that work’s focus.

Ask yourself: Which of the two dominates the shelves?

As you do this, keep in mind that:

The second category focuses upon the person. It covers what has to be learned by that person to become better. This focus includes supporting that person in doing so and shows and cultivates awareness, incentives, actions and skills within that person that contribute to making that person and the world a better place.

As you might have guessed, the overall focus of these books says a lot about the person owned by them.

Suffice it to say, you’ll find by your assessment that the majority of the books on the shelves that fall into the first category to be essentially Freemasonic in focus.

Why Freemasonic? Because each of them is all about some aspect of the Organization which bears its name and those who are members to it.

You’ll find too that the majority of the books that fall into the second category to be essentially Masonic in focus.

Why Masonic? Because each of them is all about Building both men and what they influence in the world as a whole.

Why draw these distinctions?

Great question! Ask yourself the following question: What is it that actually Makes Good Men Better?

Is it…
Having one title after another bestowed upon you for merely showing up?
Memorizing things you’ll never take the time to understand?
Serving a system whose main objectives are to perform Ritual, Recruit and Retain but not actually support what it espouses?

Or is it…
Cultivating you toward knowing and ordering your heart and head?
Directing your attention toward what is most important in life?
Unburdening you from vice and superfluity?
Building you strong and doing so in virtuous ways?
Showing and teaching you how to better relate to yourself and others – both known and unknown?
Providing you maps, legends and tools along with instructions and skill development on how to apply them effectively to navigate any territory you may encounter – both known and unknown?
Learning how the universe functions and ultimately commanding the very elements of God’s creation – not through some superstitious non-sense, magic or mystical words – but through wisely applying the laws God has laid out for you to use?

So, what does your assessment show you and the world?

What kind of library do you have?

Better yet…what kind of library has you?

John S. Nagy is a multi-degree professional business/life coach and technical advisor who provides coaching support to business professionals through his home office in the Tampa Bay area.  John has been in the coaching field since January 1989, running his own coaching practice since that time. He is a prominent Freemason and has written prolifically on the subject. 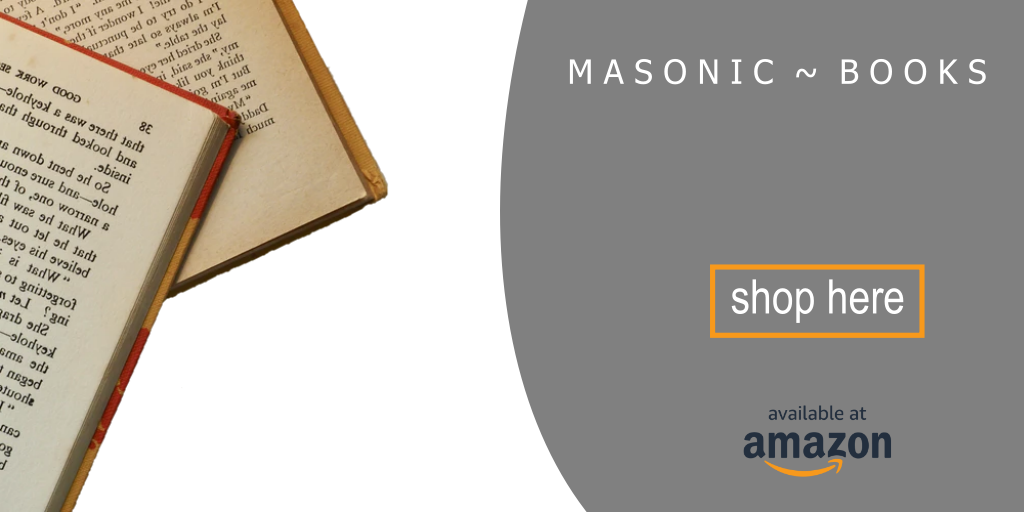