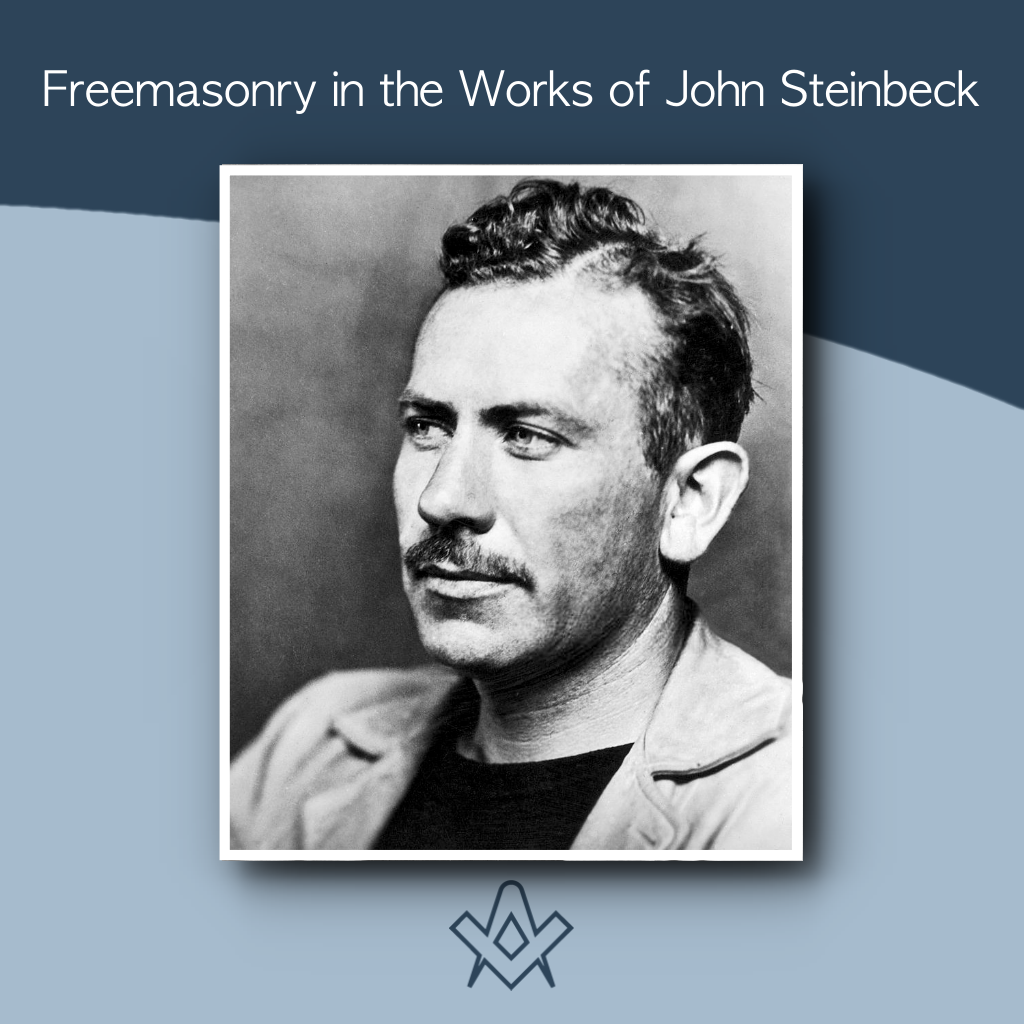 The novelist John Steinbeck, probably best known for his classic novels: East of Eden, The Grapes of Wrath, and Of Mice and Men, was born in Salinas, California, in 1902.

His extended family were steeped in Freemasonry, and as might be expected, he himself became a member of the Craft.

However, despite having a strong spiritual streak resulting from his Episcopalian background, and being very well-versed in the Bible, which he absorbed from an early age, Steinbeck eschewed organised religion and fraternal societies.

He told a friend and fellow Stanford University student Carlton ‘Duke’ Sheffield, that he joined the Masons merely to please his father; but having done so, almost immediately dismissed it as nonsense and ‘flumdummery’.

As a result, and unhindered by the fact his career as a novelist was gaining traction, Steinbeck withdrew from the Lodge on 24 May 1933.

It is evident, that for Steinbeck, as with many Freemasons today, the pomp and circumstance surrounding Masonic ceremonies was not its most attractive feature.

Steinbeck further emphasised these feelings in his fictional work: The Short Reign of Pippin IV when he states:

…I am told, the ordinary people, feeling robbed, join secret organisations, where regularly they wear crowns, and robes and ermine, and speak in rituals of antiquity which give them solemn solace even though they do not understand the words.

Steinbeck was a thinking man, and if Freemasonry had any redeeming qualities for him, it would have lain in the esoteric side of the Craft.

His widow, Elaine Steinbeck said of her late husband in 1999: ‘He had a spiritual streak that never left’.

Noted Steinbeck scholar Susan Shillinglaw added her own observation to that comment: ‘Often thin, that streak could widen to something deep, abiding, and essential to his whole emotional and intellectual life.’ (John Steinbeck’s ‘Spiritual Streak’, 2001).

It was in his literature, that Steinbeck demonstrated this spiritual streak on many occasions, infusing his books with religion, mysticism, spirituality, and a thorough examination of the human condition.

Steinbeck was hugely influenced by conversations he had with his great friend and mentor Ed Ricketts, and for a period, the pair met and debated with the American philosopher Joseph Campbell, during the latter’s period of residence on the Monterey peninsula.

Steinbeck was obsessed with Rickett’s theory of breaking through, ‘coming out through the back of the mirror into some kind of reality which would make the day world dreamlike’.

Steinbeck told a friend: ‘There are streams in man more profound and dark and strong than the libido of Freud. Jung’s libido is closer but still inadequate.’

In the late 1930s, Steinbeck wrote: ‘In every bit of honest writing in the world, there is a base theme. Try to understand men.’

…the ideas expounded by Steinbeck (have) close affinity to Indian thoughts expressed by seers such as Swami Vive-kananda. Steinbeck strikes a deep chord in every one of us when he advocates tolerance, love, understanding and compassion as the necessary tools to fight the woes of the modern age.

In present times, there can surely be no better tribute to Steinbeck the writer.

It is perhaps hardly surprising then, that a man whose interests ran so deep, would not find fulfilment in a Craft Lodge, where more emphasis might be placed on social climbing and outward appearances; than investigating the mysteries of life and nature, and attempting to understand one’s inner being.

In his non-fiction book: The Sea of Cortez, Steinbeck also wrote:

A dull man seems to be a dull man no matter what his field, and of course it is the right of a dull scientist to protect himself with feathers and robes, emblems and degrees, as do other dull men who are potentates and grand imperial rulers of lodges of dull men.

The great writer clearly did not obtain fulfilment or stimulation within the confines of his particular Masonic circle.

Steinbeck died in 1968, and among his possessions was a certificate from the brethren of Salinas Lodge, No. 204, presented to him, on his being raised to the ‘high and sublime degree of Master Mason’:

As a souvenir of Brotherly regard from the members of the Lodge and a talisman of Fidelity to his trusts in all the years that may come to him.

The fact that Steinbeck retained this certificate for the rest of his life, might suggest that whilst he could not take an active part in Freemasonry, he fully appreciated the value it held, in the life, and social cohesion, of small towns like his own home town of Salinas; and indeed, every town and city throughout the civilised world.

The present writer has been a keen student of Steinbeck’s literature for many years, and during that period has painstakingly, and perhaps absurdly, listed all references to Freemasonry throughout his entire corpus, listing almost forty.

Whilst active Freemasonry may not have been for him, this suggests that Steinbeck found the Craft far from being disinteresting or inconsequential.

John Steinbeck is perhaps best known for Of Mice and Men and The Grapes of Wrath, which led to his Nobel Prize for Literature award in 1962.

Born in Salinas, California in 1902, Steinbeck grew up in a fertile agricultural valley about twenty-five miles from the Pacific Coast: both valley and coast would serve as settings for some of his best fiction.

In 1919 he went to Stanford University, where he intermittently enrolled in literature and writing courses until he left in 1925 without taking a degree.

During the next five years he supported himself as a labourer and journalist in New York City, all the time working on his first novel, Cup of Gold (1929).

After marriage and a move to Pacific Grove, he published two California books, The Pastures of Heaven (1932) and To a God Unknown (1933) and worked on short stories later collected in The Long Valley (1938).

Three powerful novels of the late 1930s focused on the California labouring class: In Dubious Battle (1936), Of Mice and Men (1937), and the book considered by many his finest, The Grapes of Wrath (1939).

Being partly based on his own experiences as a travelling worker, Steinbeck originally wanted Of Mice and Men to be titled ‘Something That Happened’.

The book explores themes of powerlessness, loneliness and empathy and received the greatest positive critical response of any of his works up to that point.

It has achieved success as a novel, a Broadway play and three acclaimed films.

Steinbeck’s compassionate depiction of the poor in The Grapes of Wrath helped the book become an immediate publishing phenomenon, discussed on a national scale and becoming an instant bestseller.

The book was described by the Nobel Prize committee as a “great work” and stated that it was one of the main reasons for granting Steinbeck the Nobel Prize for Literature in 1962.

Early in the 1940s, Steinbeck became a filmmaker with The Forgotten Village (1941) and a serious student of marine biology with Sea of Cortez (1941).

The last decades of his life were spent in New York City and Sag Harbor with his third wife, with whom he traveled widely.

He is Past Master of a Craft Lodge, Past First Principal of a Royal Arch Chapter, Past Most-Wise Sovereign of a Sovereign Chapter of Princes Rose Croix.

He has been extensively published in various Masonic periodicals throughout the world including: The Ashlar, The Square, The Scottish Rite Journal, Masonic Magazine, Philalethes Journal, and the annual transactions of various Masonic bodies.

Kenneth is a Fellow of the Philalethes Society, a highly prestigious Masonic research body based in the USA.

He is also a Fellow of the Society of Antiquaries of Scotland.

Steinbeck: A Life in Letters

For John Steinbeck, who hated the telephone, letter-writing was a preparation for work and a natural way for him to communicate his thoughts on people he liked and hated; on marriage, women, and children; on the condition of the world; and on his progress in learning his craft.

Opening with letters written during Steinbeck’s early years in California, and closing with a 1968 note written in Sag Herbor, New York, Steinbeck: A Life in Letters reveals the inner thoughts and rough character of this American author as nothing else has and as nothing else ever will.

The Hero with a Thousand Faces

Since its release in 1949, The Hero with a Thousand Faces has influenced millions of readers by combining the insights of modern psychology with Joseph Campbell’s revolutionary understanding of comparative mythology.

In these pages, Campbell outlines the Hero’s Journey, a universal motif of adventure and transformation that runs through virtually all of the world’s mythic traditions. He also explores the Cosmogonic Cycle, the mythic pattern of world creation and destruction.

As relevant today as when it was first published, The Hero with a Thousand Faces continues to find new audiences in fields ranging from religion and anthropology to literature and film studies.

The book has also profoundly influenced creative artists—including authors, songwriters, game designers, and filmmakers—and continues to inspire all those interested in the inherent human need to tell stories.

The Joy of Masonic Book Collecting

Book purchasing and collecting is a great joy in its own right, but when a little extra something reveals itself on purchase; particularly with regards to older, rarer titles..

Masons, Magus', and Monks of St Giles - who were the Birrell family of Scottish Freemasonry?

The 6th Duke of Atholl - Chieftain, Grand Master, and a Memorial to Remember

In 1865, why did over 500 Scottish Freemasons climb a hill in Perthshire carrying working tools, corn, oil and wine? Author Kenneth Jack retraces their steps, and reveals all.

A Mother Lodge and a Connection Uncovered, a claim that Sir Robert Moray was the first speculative Freemason to be initiated on English soil.

What is it that connects a very old, well-known Crieff family, with a former President of the United States of America?

The life of Bro. Cattanach, a theosophist occultist and Scottish Freemason

The Colour Purple - Its Derivation and Masonic Significance

What is the colour purple with regards to Freemasonry? The colour is certainly significant within the Royal Arch series of degrees being emblematical of Union.

The Author - an ode