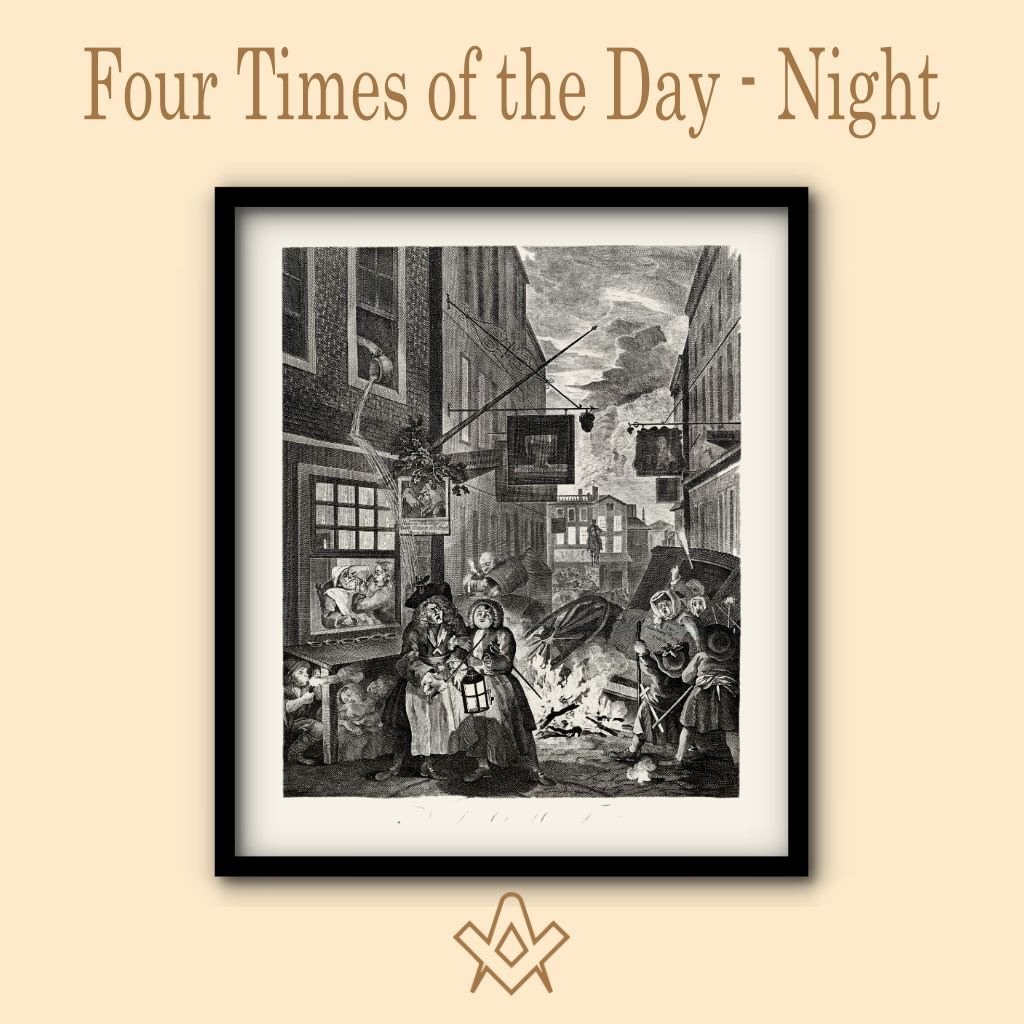 They are humorous depictions of life in the streets of London, the vagaries of fashion, and the interactions between the rich and poor.

The Painter and His Pug by William Hogarth (1745)

William Hogarth FRSA was an English painter, printmaker, pictorial satirist, social critic, responsible for the introduction of copyright act of parliament and he was also a Freemason.

His work ranges from realistic portraiture to comic strip-like series of pictures called ‘modern moral subjects’, and he is perhaps best known for his series A Harlot’s Progress, A Rake’s Progress and Marriage A-la-Mode.

Knowledge of his work is so pervasive that satirical political illustrations in this style are often referred to as ‘Hogarthian’.

Hogarth was born in London (10 November 1697 – died 26 October 1764). In his youth he took up an apprenticeship with an engraver, but did not complete the apprenticeship.

They became widely popular and mass-produced via Etchings in his lifetime, and he was by far the most significant English artist of his generation. Charles Lamb deemed Hogarth’s images to be books, filled with ‘the teeming, fruitful, suggestive meaning of words. Other pictures we look at; his pictures we read’. 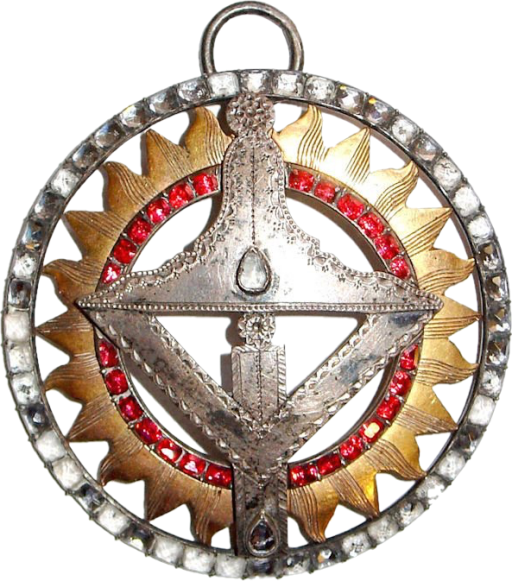 Hogarth Jewel – Designed by William Hogarth, appointed a Grand Steward in 1734 for the 17 April 1735 Feast at Mercer’s Hall, and worn by all Grand Stewards—and many Past Grand Stewards—until 1835 following the change of jewel to a compasses and cornucopia.

Hogarth was initiated sometime between 1725-1728 into the Lodge at the Hand and Apple Tree Tavern No. 41, but due to his passion for Freemasonry, he went on to join many other lodges in his life.

Hogarth designed a jewel to be worn by Grand Stewards, with their own jewel of office to be suspended from a crimson ribbon and their aprons lined and edged in the same colour.

He would have been one of the first brothers to be ‘raised’ as the Third Degree of Craft Freemasonry was introduced in 1725. 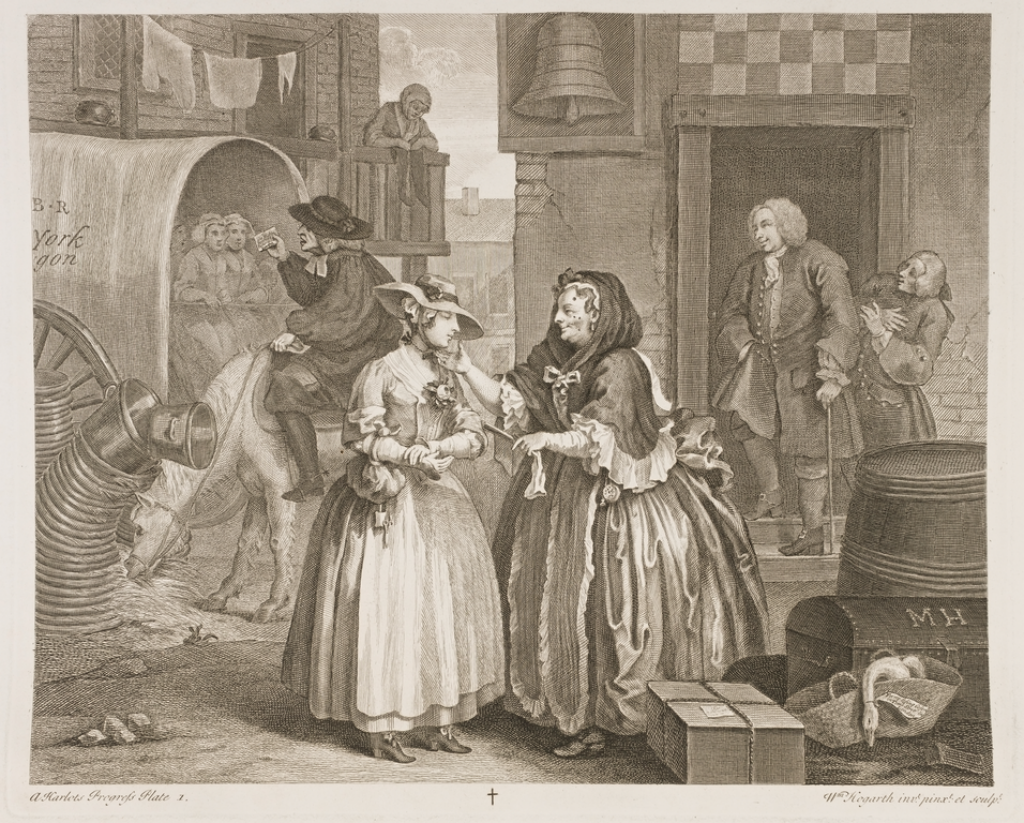 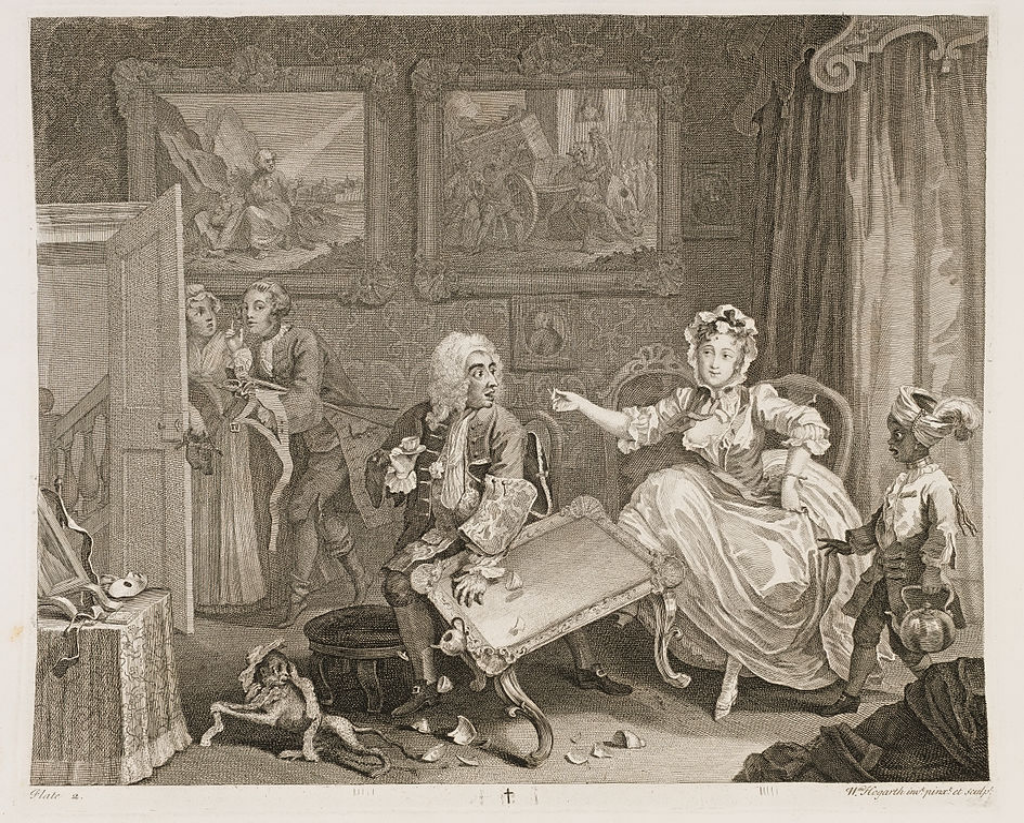 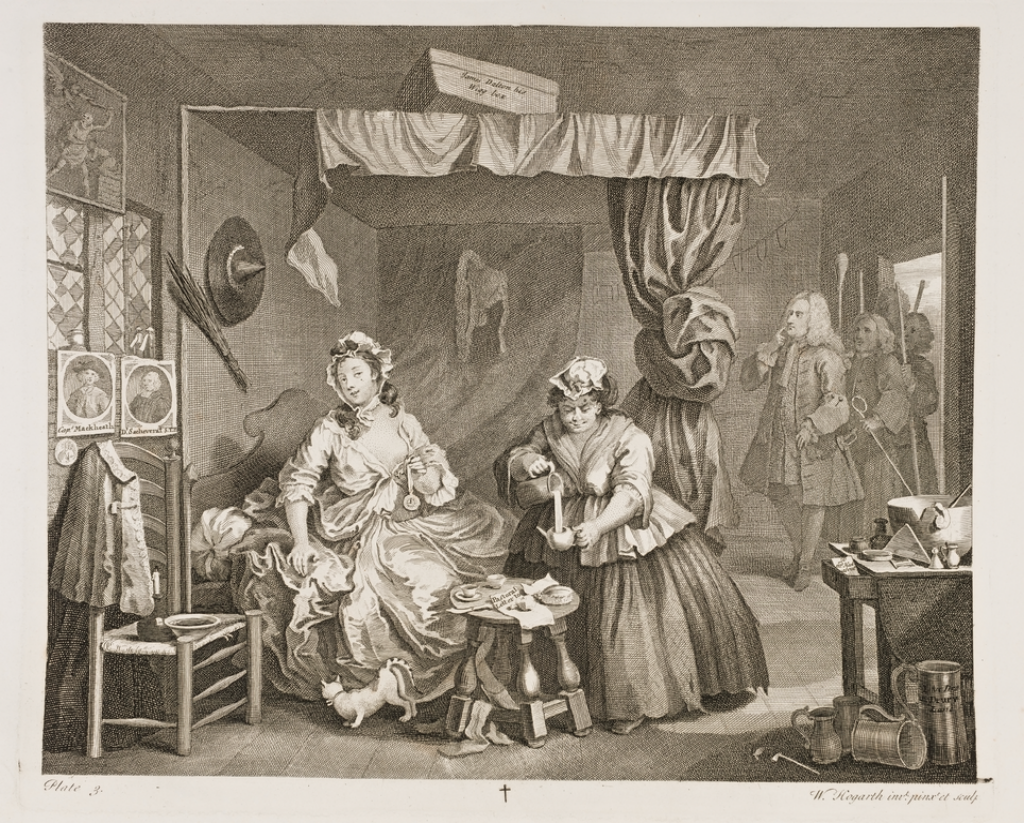 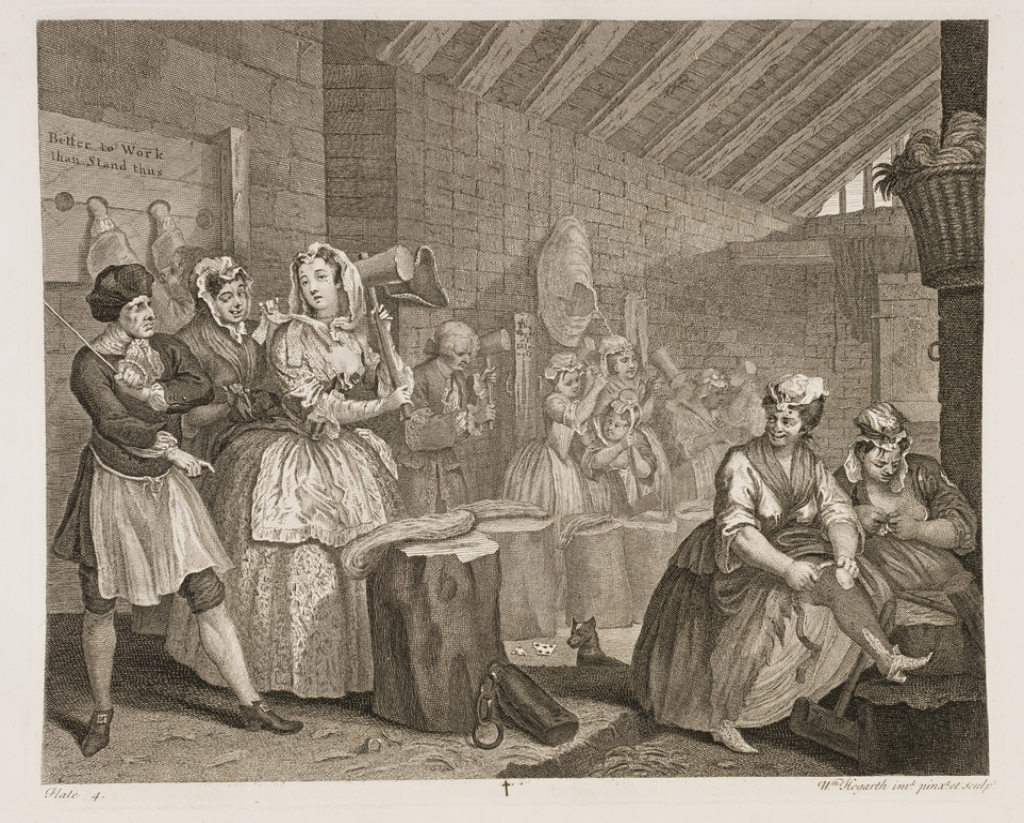 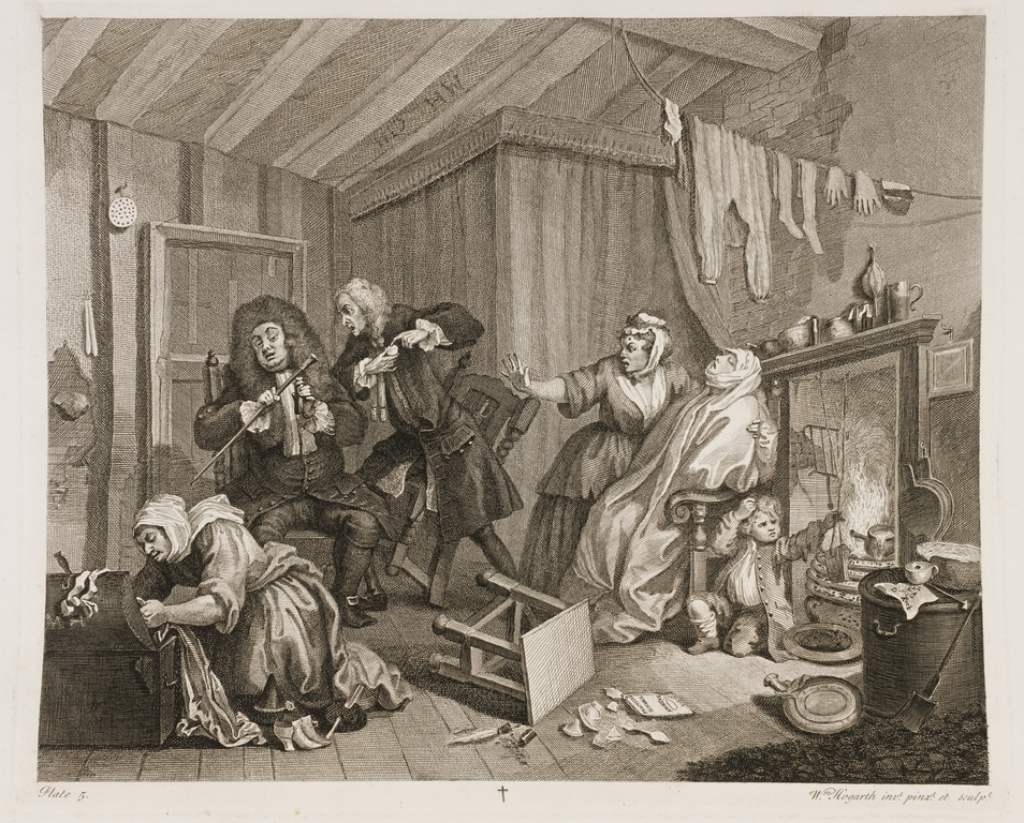 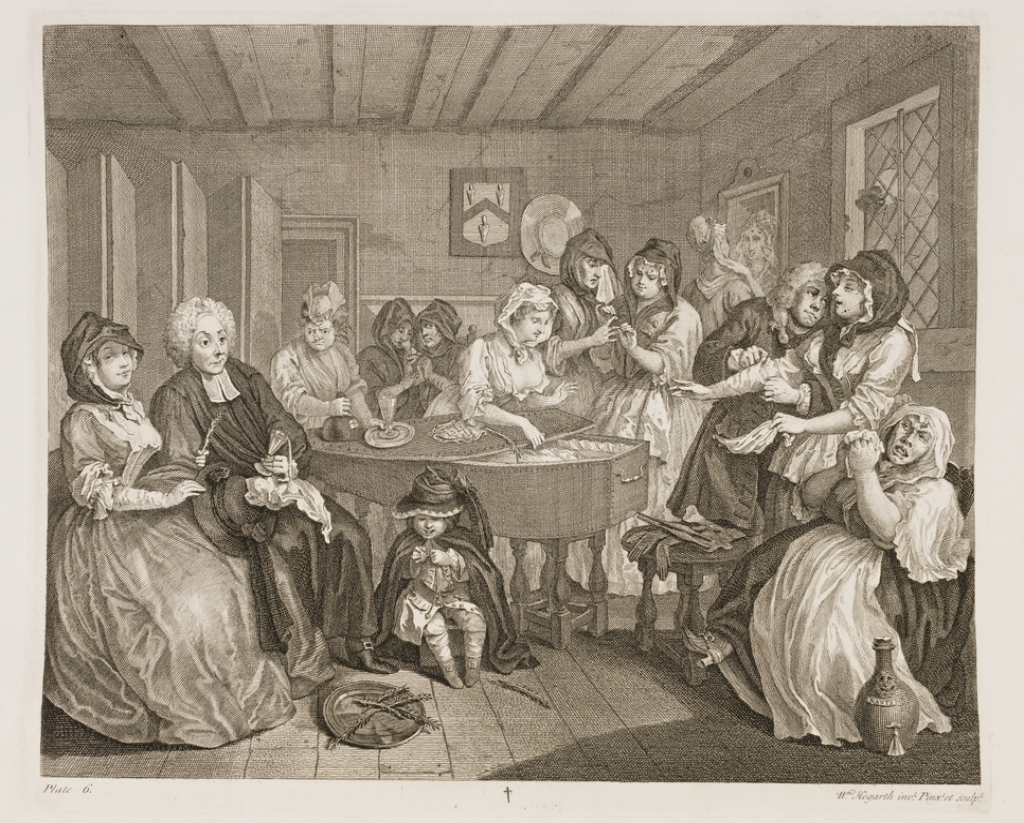 In 1731, Hogarth completed the earliest of his series of moral works, a body of work that led to significant recognition. The collection of six scenes was entitled ‘A Harlot’s Progress’ and appeared first as paintings before being published as engravings.

A Harlot’s Progress depicts the fate of a country girl who begins prostituting – the six scenes are chronological, starting with a meeting with a bawd and ending with a funeral ceremony that follows the character’s death from venereal disease.

However, Hogarth ‘exposed’ many of the secret signs of Freemasonry within this series but concealed them so masterfully. 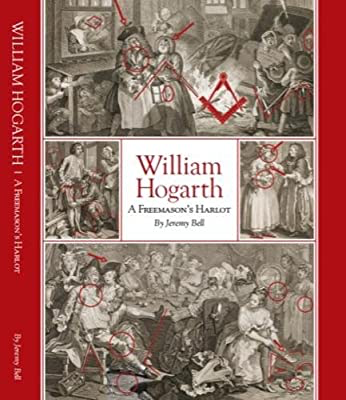 A book William Hogarth – A Freemason’s Harlot by Jeremy Bell details the signs of Freemasonry within each plate, which relies heavily on Masonic Exposes printed at the time.

The inaugural series was an immediate success and was followed in 1733–1735 by the sequel A Rake’s Progress. The second instalment consisted of eight pictures that depicted the reckless life of Tom Rakewell, the son of a rich merchant, who spends all of his money on luxurious living, services from prostitutes, and gambling – the character’s life ultimately ends in Bethlem Royal Hospital.

When the success of A Harlot’s Progress and A Rake’s Progress resulted in numerous pirated reproductions by unscrupulous print sellers, Hogarth lobbied in parliament for greater legal control over the reproduction of his and other artists’ work.

The result was the Engravers’ Copyright Act also known as ‘Hogarth’s Act‘, which became law on 25 June 1735 and was the first copyright law to deal with visual works as well as the first to recognize the authorial rights of an individual artist.

In 1743–1745, Hogarth painted the six pictures of Marriage A-la-Mode (National Gallery, London), a pointed skewering of upper-class 18th-century society. This moralistic warning shows the miserable tragedy of an ill-considered marriage for money. This is regarded by many as his finest project and may be among his best-planned story serials.

Marital ethics were the topic of much debate in 18th-century Britain. The many marriages of convenience and their attendant unhappiness came in for particular criticism, with a variety of authors taking the view that love was a much sounder basis for marriage.

Hogarth here painted a satire – a genre that by definition has a moral point to convey – of a conventional marriage within the English upper class.   All the paintings were engraved and the series achieved wide circulation in print form.

The series, which is set in a Classical interior, shows the story of the fashionable marriage of Viscount Squanderfield, the son of bankrupt Earl Squander, to the daughter of a wealthy but miserly city merchant, starting with the signing of a marriage contract at the Earl’s mansion and ending with the murder of the son by his wife’s lover and the suicide of the daughter after her lover is hanged at Tyburn for murdering her husband.

Hogarth’s House in Chiswick, west London, is now a museum; the major road junction next to it is named the Hogarth Roundabout. In 2014 both Hogarth’s House and the Foundling Museum held special exhibitions to mark the 250th anniversary of his death.

In 2019, Sir John Soane’s Museum, which owns both The Rake’s Progress and The Humours of an Election, held an exhibition which assembled all Hogarth’s series of paintings, and his series of engravings, in one place for the first time.

Four Times of the Day, series of four oil paintings by William Hogarth.

equestrian statue of Charles I of England by Hubert Le Sueur

The final picture in the series, Night, shows disorderly activities under cover of night in the Charing Cross Road, identified by Hubert Le Sueur‘s equestrian statue of Charles I of England and the two pubs this part of the road is now known as Whitehall.

In the background the passing cartload of furniture suggests tenants escaping from their landlord in a ‘moonlight flit’. In the painting the moon is full, but in the print it appears as a crescent.

Traditional scholarship has held that the night is 29 May, Oak Apple Day,  a public holiday which celebrated the Restoration of the monarchy (demonstrated by the oak boughs above the barber’s sign and on some of the subjects’ hats, which recall the royal oak tree in which Charles II hid after losing the Battle of Worcester in 1651).

Alternatively, Sean Shesgreen has suggested that the date is 3 September, commemorating the battle of Worcester itself, a dating that preserves the seasonal progression from winter to spring to summer to autumn.

Charing Cross was a central staging post for coaches, but the congested narrow road was a frequent scene of accidents; here, a bonfire has caused the Salisbury Flying Coach to overturn. Festive bonfires were usual but risky: a house fire lights the sky in the distance. A link-boy  blows on the flame of his torch, street-urchins are playing with the fire, and one of their fireworks is falling in at the coach window.

On one side of the road is a Barber Surgeon whose sign advertises Shaving, bleeding, and teeth drawn with a touch. Ecce signum! Inside the shop, the barber, who may be drunk, haphazardly shaves a customer, holding his nose like that of a pig, while spots of blood darken the cloth under his chin.

The surgeons and barbers had been a single profession since 1540 and would not finally separate until 1745, when the surgeons broke away to form the Company of Surgeons. Bowls on the windowsill contain blood from the day’s patients.

Underneath the windowshelf, a homeless family have made a bed for themselves: vagrancy was a criminal offence.

In the foreground, a drunken Freemason, identified by his apron and set square medallion as the Worshipful Master of a lodge, is being helped home by his Tyler, as the contents of a chamber pot are emptied onto his head from a window.

In some states of the print, a woman standing back from the window looks down on him, suggesting that his soaking is not accidental !

The freemason is traditionally identified as Sir Thomas de Veil, who was a member of Hogarth’s first Lodge, Henry Fielding‘s predecessor as the Bow Street magistrate, and the model for Fielding’s character Justice Squeezum in the play Rape upon Rape also known as The Justice Caught in His Own Trap and The Coffee-House Politician (1730).

Sir Thomas de Veil was unpopular for his stiff sentencing of gin-sellers, which was deemed to be hypocritical as de Veil was known to be an enthusiastic drinker. In the painting he is supported by his Tyler, a servant equipped with sword and candle-snuffer, who may be Brother Montgomerie, the Grand Tyler.

All around are pubs and brothels. The Earl of Cardigan tavern is on one side of the street, and opposite is the Rummer, whose sign shows a rummer (a short wide-brimmed glass) with a bunch of grapes on the pole.

Masonic lodges met in both taverns during the 1730s, and the Lodge at the Rummer and Grapes in nearby Channel Row was the smartest of the four founders of the Premier Grand Lodge.

Matthew Prior by Thomas Hudson

The publican is adulterating a hogshead of wine, a practice recalled in the poetry of Matthew Prior  who lived with his uncle Samuel Prior, the Landlord successively of both the Rummer and Grapes and The Rummer.

My uncle, rest his soul, when living,
Might have contriv’d me ways of thriving;
Taught me with cider to replenish
My vats, or ebbing tide of Rhenish.

On either side of the street are signs for The Bagnio and The New Bagnio. Ostensibly a Turkish bath, ‘bagnio’ had come to mean a disorderly house. The 6th Earl of Salisbury scandalised society by driving and upsetting a stagecoach. John Ireland suggests that the overturned ‘Salisbury Flying Coach’ below the ‘Earl of Cardigan’ sign was a gentle mockery of the Grand Master 4th Earl of Cardigan, George Brudenell, later Duke of Montagu, who was also renowned for his reckless carriage driving and it also mirrors the ending of Gay’s Trivia in which the coach is overturned and wrecked at night.

Low quality images of all four prints can be down loaded here: cle.ens-lyon

Full size engravings do appear from time to time at auction houses. The estimate is usually £1000+ / €1,000+ / $1,300+ for good quality engravings; price is dependent on quality and date of edition. 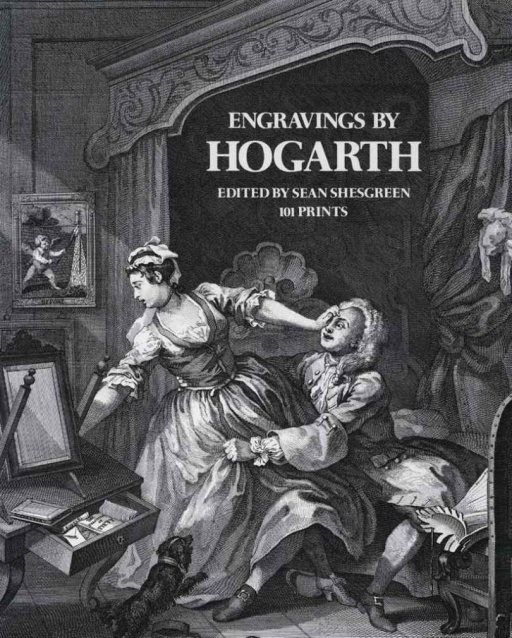 This book contains 101 of Hogarth’s finest and most important engravings, including all the major series or “progresses”: “The South Sea Scheme,” A Harlot’s Progress, “A Midnight Modern Conversation,” A Rake’s Progress, Before and After, Marriage à la Mode, Industry and Idleness, “The March to Finchley,”The Four Stages of Cruelty, “Time Smoking a Picture,” “Tailpiece,” and many more, including ten study sketches and paintings that show how the final works evolved.

Sean Shesgreen, a foremost authority on Hogarth, has consistently selected the best states of the plates to be used in this edition and has carefully introduced them, commenting upon the artist’s milieu and the importance of plot, character, time, setting, and other dimensions. A most important aspect of this book, found in no other Hogarth edition, is the positioning of the editor’s commentary on each plate on a facing page. With the incredible and sometimes overwhelming amount of detail and action going on in these engravings, this is a most helpful feature. 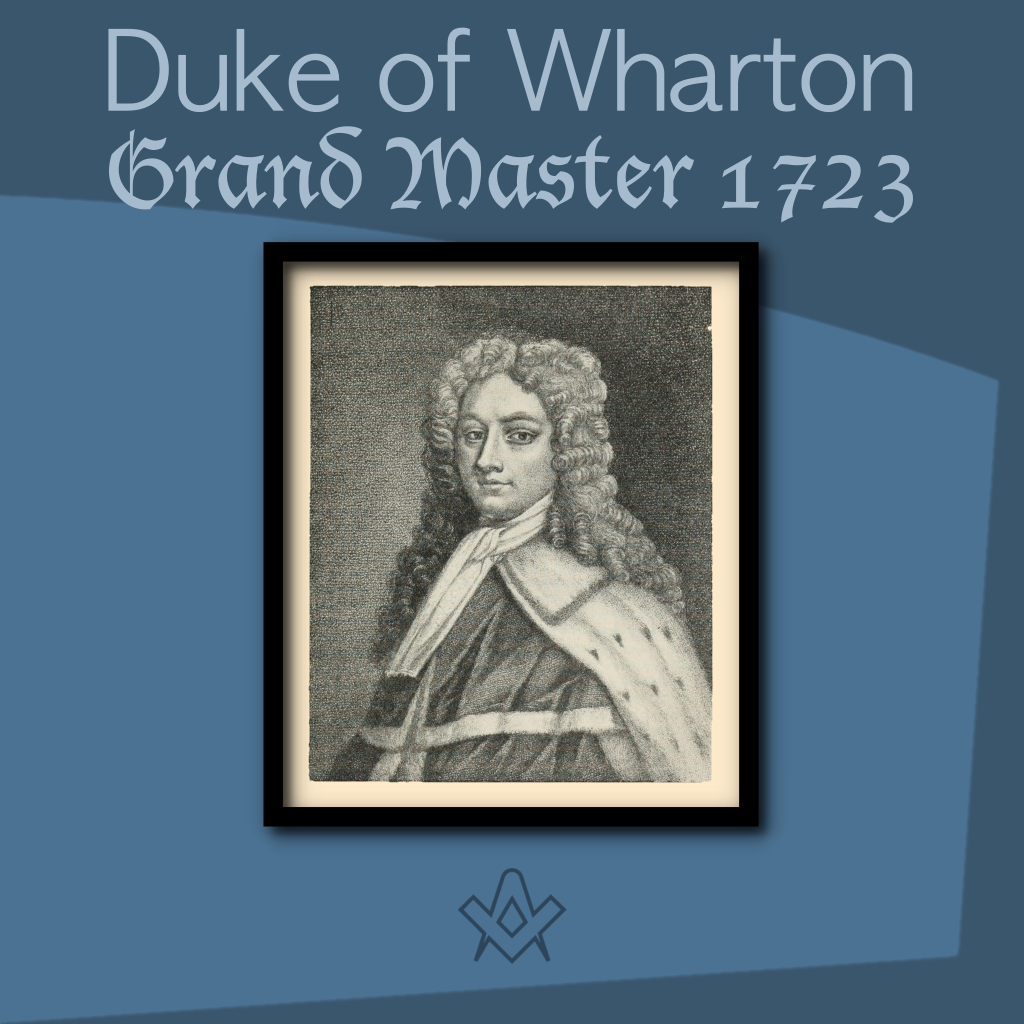 Who was Philip, Duke of Wharton and was he Freemasonry’s Loose Cannon Ball ?  …read more 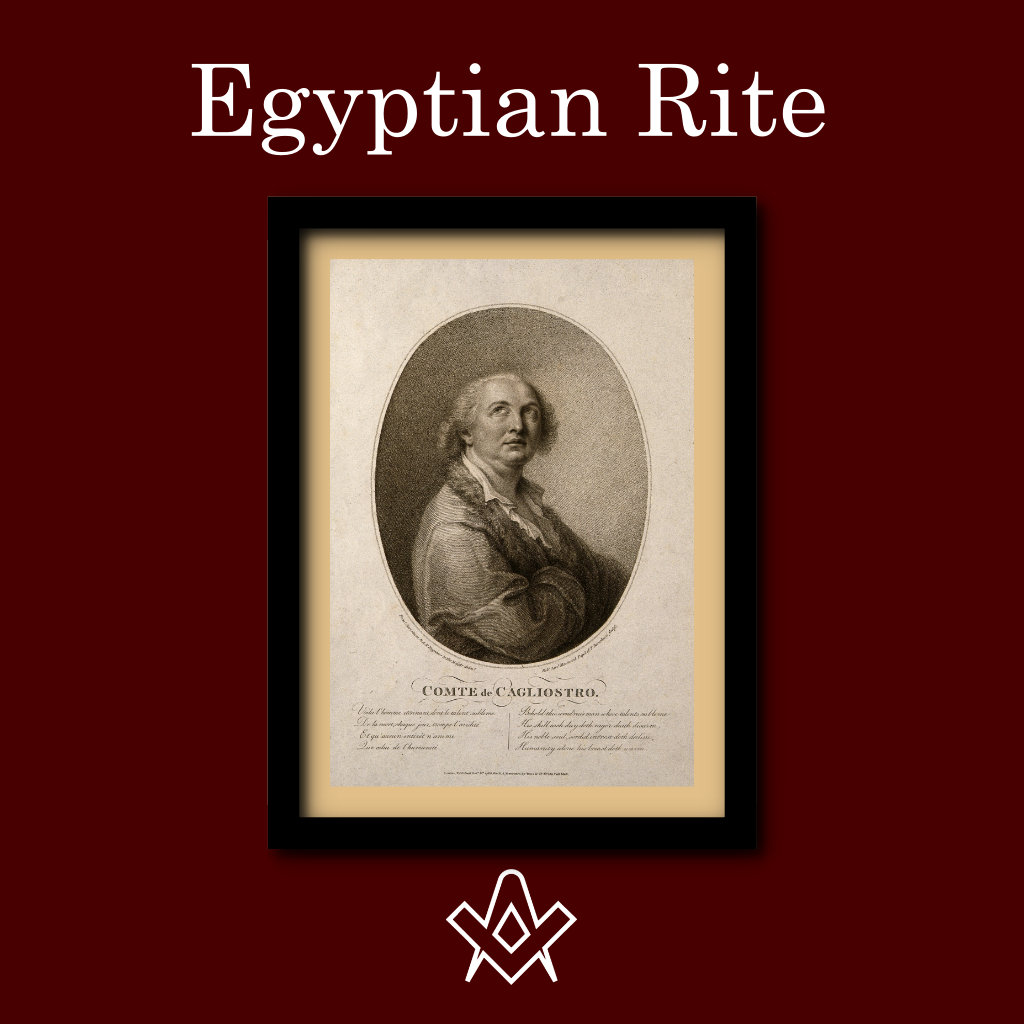 Egyptian Freemasonry, founder Cagliostro was famed throughout eighteenth century Europe for his reputation as a healer and alchemist  …read more 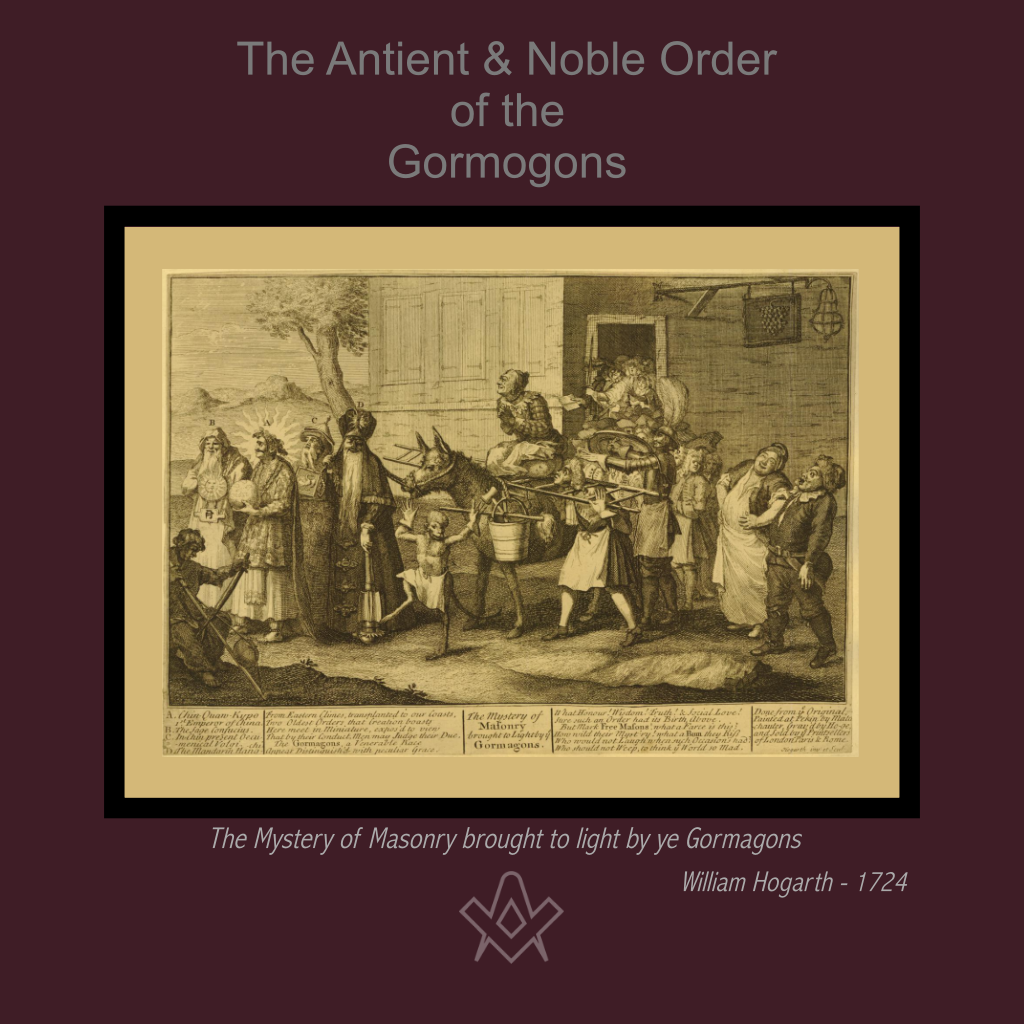 Who were The Antient Noble Order of the Gormogons ?  …read more 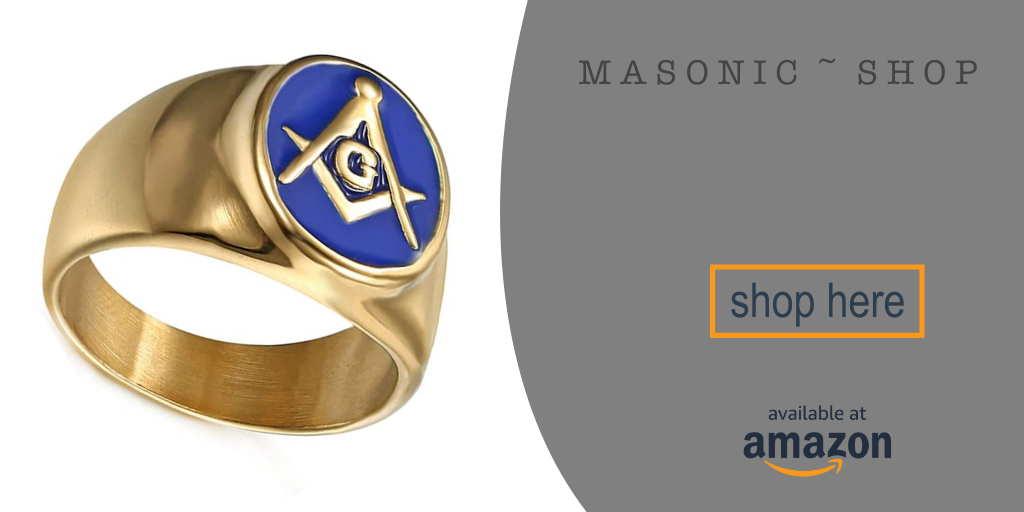