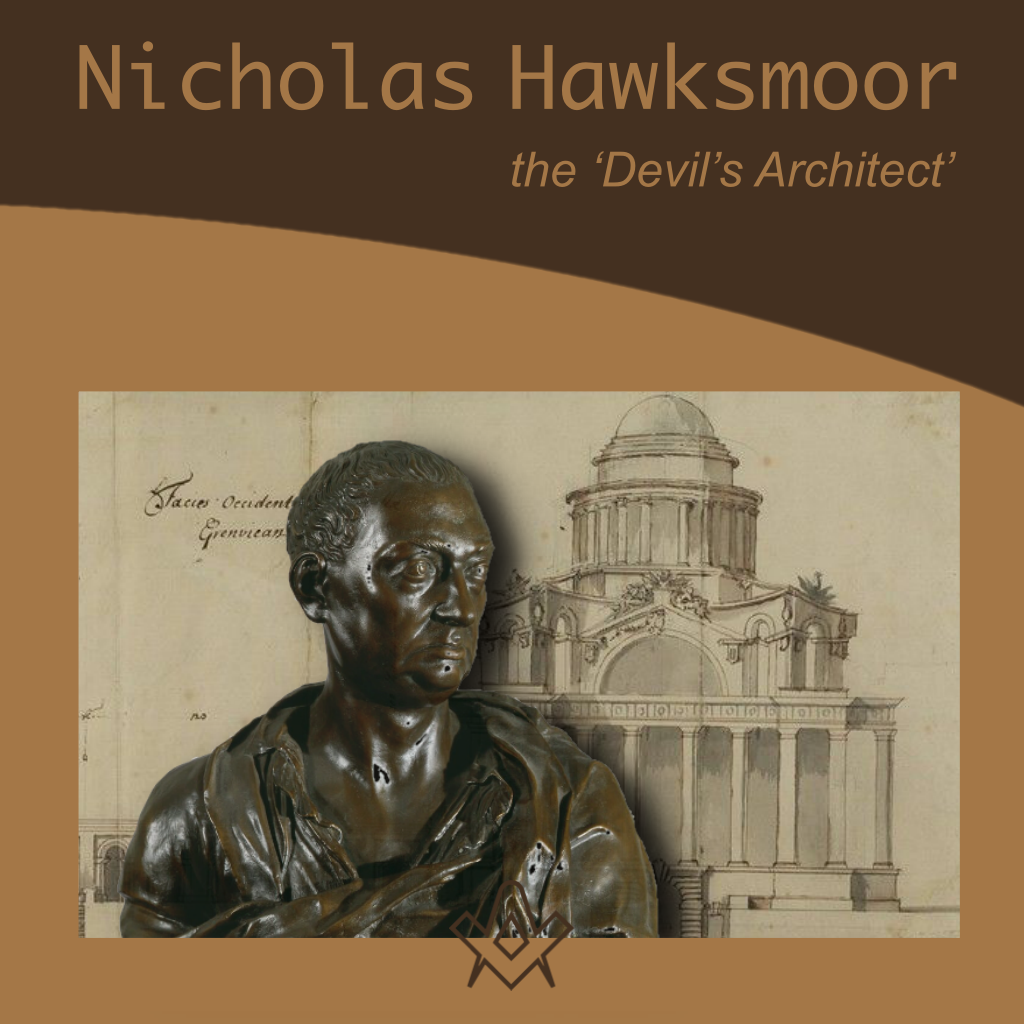 Nicholas Hawksmoor was one of the 18th century’s most prolific architects; yet recognition for his strikingly unique designs has historically been dwarfed not only beneath the vast shadow of his tutor Sir Christopher Wren but also by a shadowy reputation– perpetuated by popular culture – of being intrinsically linked to the esoteric and arcane.

Born in Nottingham around 1661, Nicholas Hawksmoor went from being the son of a yeoman farmer, to apprentice clerk to Sir Christopher Wren, the giant of architecture.

By all accounts a humble, hard-working clerk, the young man caught the shrewd eye of Wren, who took him under his creative wing and allowed Hawksmoor to work on his piece de resistance – St Paul’s Cathedral.

Hawksmoor learnt his craft under the great master and went on to have an independent practice whereby he designed parts of Westminster Abbey and All Souls College in Oxford.

In 1710, an Act for the building of Fifty New Churches in the Cities of London and Westminster or the Suburbs thereof, was passed by parliament, which then established a 1711 Commission of architects including Christopher Wren, Sir John Vanbrugh (the designer of Blenheim Palace and Castle Howard), Thomas Archer and a number of churchmen, who appointed Hawksmoor and William Dickinson as its surveyors.

As supervising architects, they were not necessarily expected to design all the churches themselves.

Dickinson resigned in 1713, was replaced by James Gibbs, best known for his design of St Martin-in-the-Fields. After just two years, Gibbs was removed from the Commission (although he managed to complete one church, St Mary le Strand) and replaced by John James, who remained in office until the commission was wound up in 1733.

A combination of a declining enthusiasm by the Commission for the project, and the expense of the buildings, resulted in just twelve churches being completed (known as the Queen Anne Churches); of which six were designed by Hawksmoor, and two – St Luke Old Street and St John Horsleydown in collaboration with James. 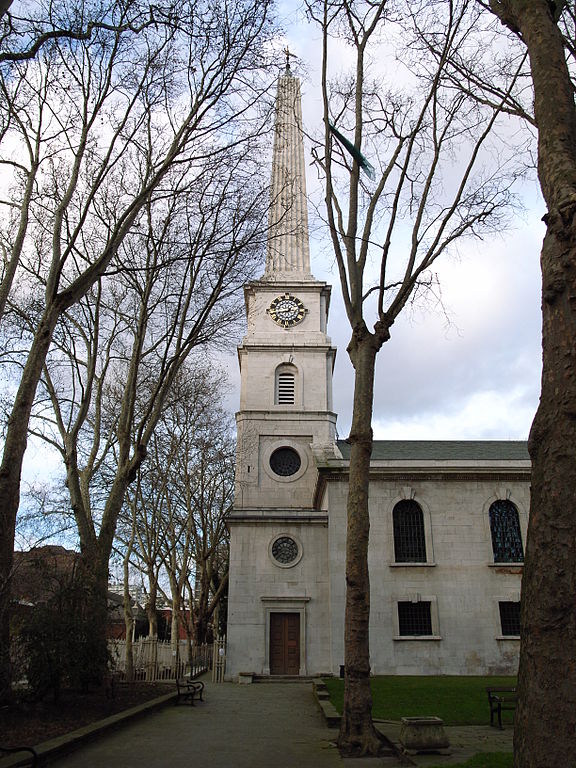 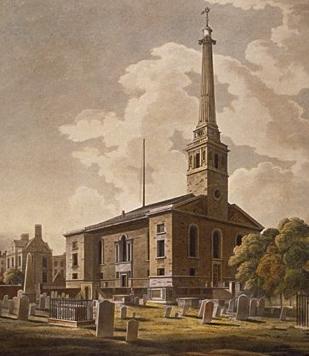 Engraving of the parish church of St John Horsleydown, Bermondsey, London SE1, seen from the northwest. In 1940 the church was severely damaged by a Luftwaffe bomb and after 1968 it was demolished. 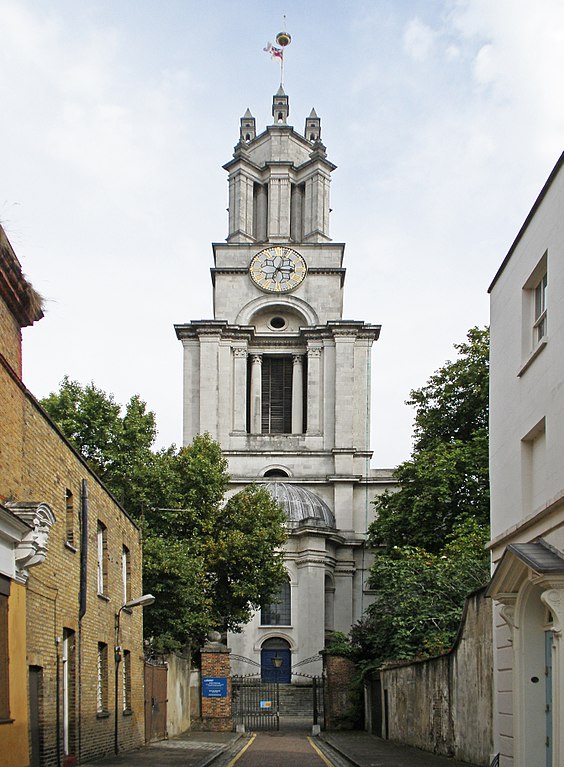 His designs drew much criticism – labelled ‘idiosyncratic’ and ‘absurd’.

Contemporary critic James Ralph, was vitriolic in his dislike of Hawksmoor’s designs, describing them as ‘Gothique heaps of stone, without form or order’.

Idiosyncratic they may have been, and to some absurd, but they were all majestic masterpieces; formed in an eclectic style, with aspects borrowed from various schools of architecture culminating in some of the most striking – if not slightly disconcerting – 18th century structures remaining in London today.

Yet it was Hawksmoor’s fascination with sacred geometry and mythology that has become the focus of, and perhaps overshadowed, his genius for design.

Many writers attribute this to his interest in, and subsequent initiation into Freemasonry but that event was not until 1730, six years prior to his death, within a lodge at the Oxford Arms, Ludgate Street, in the City of London.

It is more probable that his passion for the arcane and esoteric came from his exploration of classical antiquity, the Renaissance, the English Middle Ages and contemporary Italian baroque.

Although Hawksmoor never travelled to Italy, he was influenced by studying engravings of the monuments of ancient Rome, and reconstructions of the Temple of Solomon.

Largely forgotten after his death, it was his purported esoteric leanings that fired the imagination of Welsh writer Iain Sinclair who produced a work entitled Lud Heat (1975), which featured a poem ‘Nicholas Hawksmoor: His Churches’, which:

In a unique fusion of prose and poetry, Sinclair invokes the mythic realm of King Lud, who according to legend was one of the founders of London, as well as the notion of psychic ‘heat’ as an enigmatic energy contained in many of its places.’

…an assistant to Sir Christopher Wren and the man with a commission to build seven London churches to stand as beacons of the enlightenment.

But Dyer plans to conceal a dark secret at the heart of each church – to create a forbidding architecture that will survive for eternity. Two hundred and fifty years later, London detective Nicholas Hawksmoor is investigating a series of gruesome murders on the sites of certain eighteenth-century churches – crimes that make no sense to the modern mind.

Sinclair and Ackroyd’s fascination with Hawksmoor’s churches belie the belief that they formed a geometric pattern; most notable a pentagram/pentacle – ‘a triangle is formed between Christ Church, St George-in-the -East, and St Anne, Limehouse’ asserts Sinclair in Lud Heat, and he further ventures that ‘St George, Bloomsbury, and St Alfege, Greenwich, make up the major pentacle star’.[2]

Their inspiration came from so-called ‘occultist psychogeography’, which has its roots in the Paris-based Letterist International, an avant garde and Marxist collective.

The dérive (meaning ‘drift’) was a manifesto, or instruction manual, produced in 1958 by Letterist member Guy Debord, who defined psychogeography as ‘the study of the precise laws and specific effects of the geographical environment, consciously organised or not, on the emotions and behaviour of individuals’.

In layman’s terms it purports to the soul of a city; the ghosts that haunt us in urban landscapes.

The contemporary movement inspired writers such as Sinclair, Peter Ackroyd and Alan Moore (Watchmen and V for Vendetta) to produce works predominantly featuring Hawksmoor and the purported occult message in the positioning of his churches.

In all the modern works, it is Hawksmoor’s churches that positively ooze gothic menace and according to the authors compels or inspires the psychic evil in our society to coalesce via hidden (ley) lines and manifest within these areas.

Moore’s seminal work From Hell (Alan Moore, Eddie Campbell) follows a theory by journalist, and anti-Mason, Stephen Knight, whose frenzied stab at the establishment, in the form of the Monarchy and Freemasonry, implied that the Jack the Ripper murders were part of a conspiracy to conceal the birth of an illegitimate royal baby fathered by Prince Albert Victor, Duke of Clarence.

This dark, yet compelling graphic novel features Hawksmoor’s churches as power points that map out the territory of the Ripper, who was using them as altars of blood sacrifice for his victims.

In the accompanying image from Moore and Campbell’s From Hell, an emerging symbol of a pentagram appears linking various sites around London (including Hawksmoor’s churches and Wren’s St Pauls Cathedral). 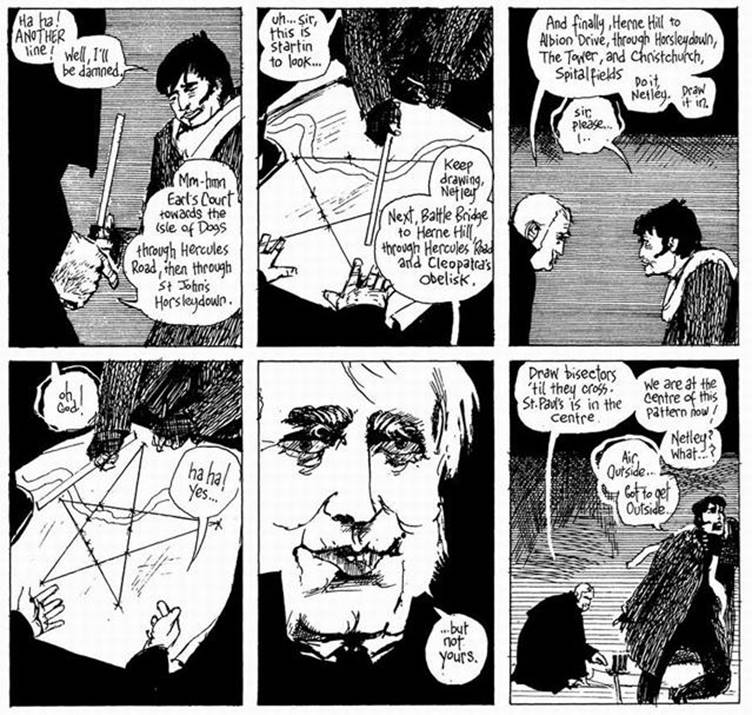 So, what would Hawksmoor make of his churches being becoming supposed power points of evil, spiritual vortexes demanding blood sacrifice or even his moniker of ‘devil’s architect’?

During his life, he never showed signs of a devilish or wicked nature – he was described by his son-in-law Nathaniel Blackerby as:

…a tender husband, a loving father, a sincere friend, and a most agreeable companion; nor could the most poignant pains of Gout, which he for many years laboured under, ever ruffle or discompose his evenness of temper.

And as his memory must always be dear to his Country, so the loss of so great and valuable man in sensibly, and in a more particular manner felt by those who had the pleasure of his personal acquaintance, and enjoy’d the happiness of his conversation.

There is no denying that Hawksmoor’s designs were idiosyncratic, domineering, and more than a nod to the emerging symbolism of 18th century Egyptomania and Freemasonry; both of which immediately gained notoriety for their mysterious and incomprehensible context.

However, the idea that there was an occult ‘agenda’ involved in the positioning of his and the Fifty Churches Commission’s buildings is queried eloquently in a fascinating paper by David Ashcroft of Surrey University entitled ‘The Mechanics of the Occult: London’s Psychogeographical Fiction as Key to Understanding the Roots of the Gothic’ (The Literary London Journal, 2013).

Ashcroft points out that the political, social and religious attitudes and conflicts at the time which the Commission and Hawksmoor et al were designing and building the churches were complex.

All were attitudes or scenarios that in the 20th century played right into the hands of a group like the Letterists who would, quite literally, see Establishment oppression and conspiracy around every corner.

Hawksmoor was no more a Satanist than he was a gothic architect; his genius lay in creating a ‘bricolage – cobbling together of pre-existing architectural elements – of symbols and structures – developed by pagan cultures from across the Ancient World’.[3]

Ashford sums up Hawksmoor’s ideal perfectly when he says that:

…in this deliciously paranoid material, Hawksmoor is presented not as atypical but archetypal. His acknowledged interest in Egyptian hieroglyphs, freemasonry, his proposed and actual use of magical funerary objects, is not opposed to but intrinsically a part of the movement toward neoclassicism in the culture of the period.

Rehabilitation of Nicholas Hawksmoor’s architectural merit has been slow to come but in the last few decades, greater interest in his inimitable style, and appreciation for the eclectic bricolage his designs engendered has resurfaced, with many of his churches being conserved or saved from demolition.

But it is the beautiful scale creations by brothers Robert and Gavin Paisley that have brought Hawksmoor’s most striking designs to our attention.

London has presented a veritable treasure trove of fascinating structures, in a wide range of shapes and styles to the brothers and last year they directed their attention towards what they describe as ‘two of London’s lesser-known architectural gems’, Christ Church, Spitalfields and St Mary Woolnoth.

The models are the brand’s most complex pieces to date and are homage to Hawksmoor, who is one of Robert and Gavin’s favourite architects.

Exquisitely crafted with painstaking attention to detail, the two models express every feature with absolute clarity.

Taking a year to perfect, they were indeed a labour of love, and Hawksmoor’s legacy has become reputable – and – desirable once more. 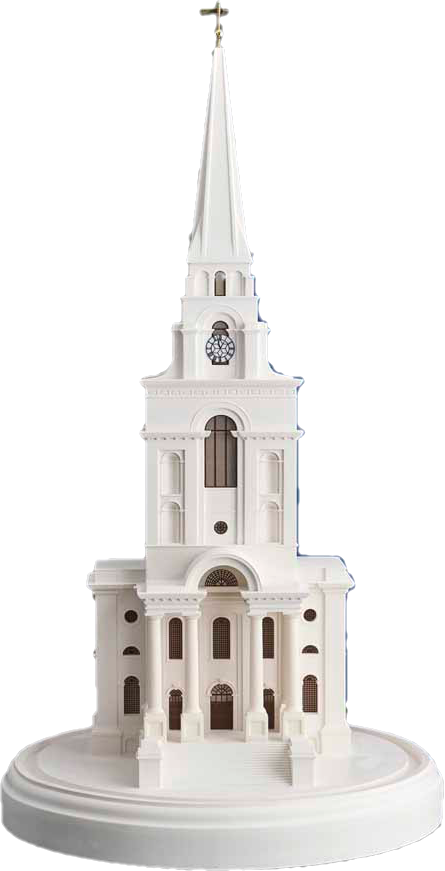 Special thanks to Tony Bennett at Knockabout Ltd. for permission to use the ‘From Hell’ image.

Grateful thanks to Gavin and Robert Paisley at Chisel and Mouse for sharing images and text.

3. Ashcroft, D. The Mechanics of the Occult: London’s Psychogeographical Fiction as Key to Understanding the Roots of the Gothic’ (The Literary London Journal, Volume 10 Number 2, Autumn 2013, p. 8)

Ashcroft, D. ‘The Mechanics of the Occult: London’s Psychogeographical Fiction as Key to Understanding the Roots of the Gothic’ (The Literary London Journal, Volume 10 Number 2, Autumn 2013, p.8) 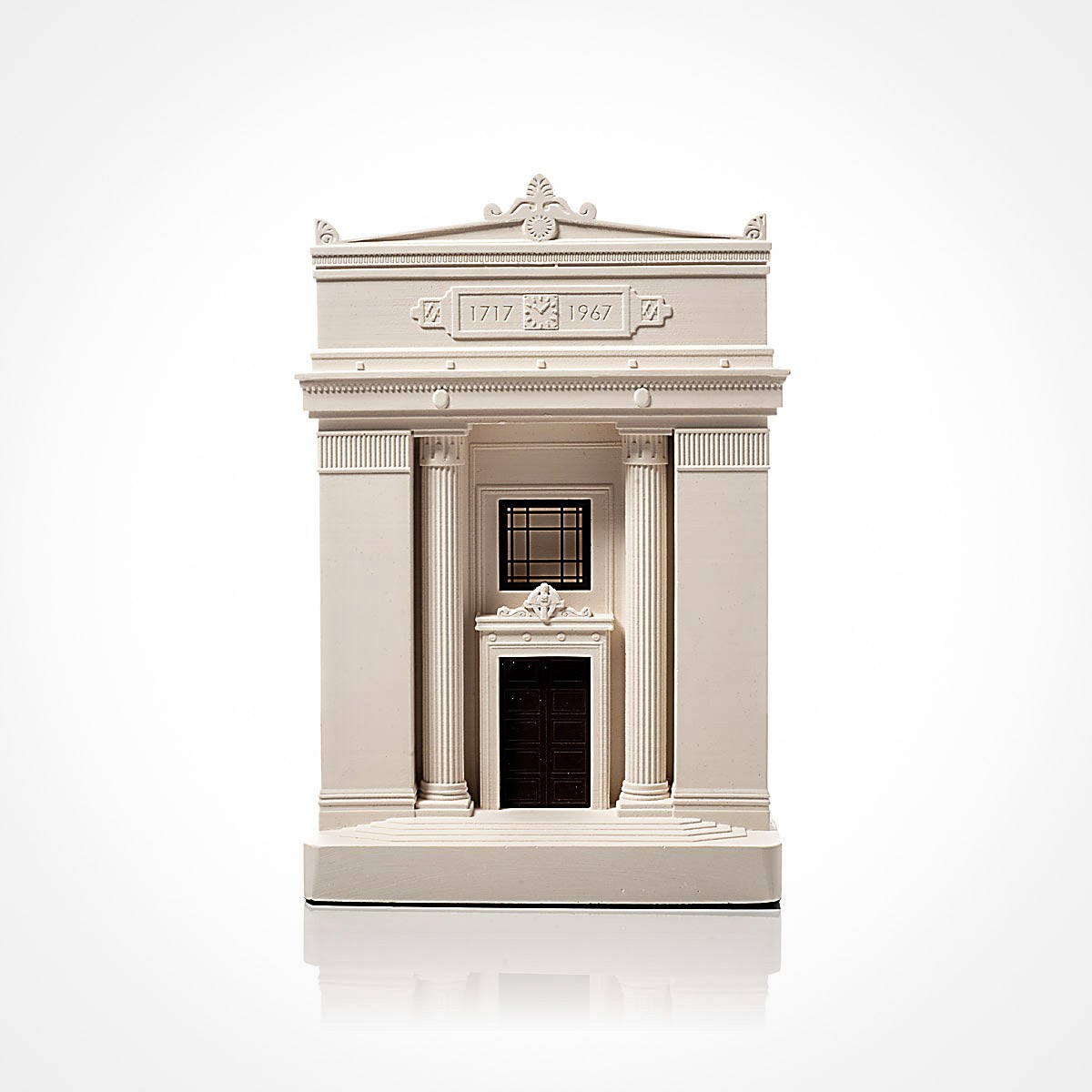