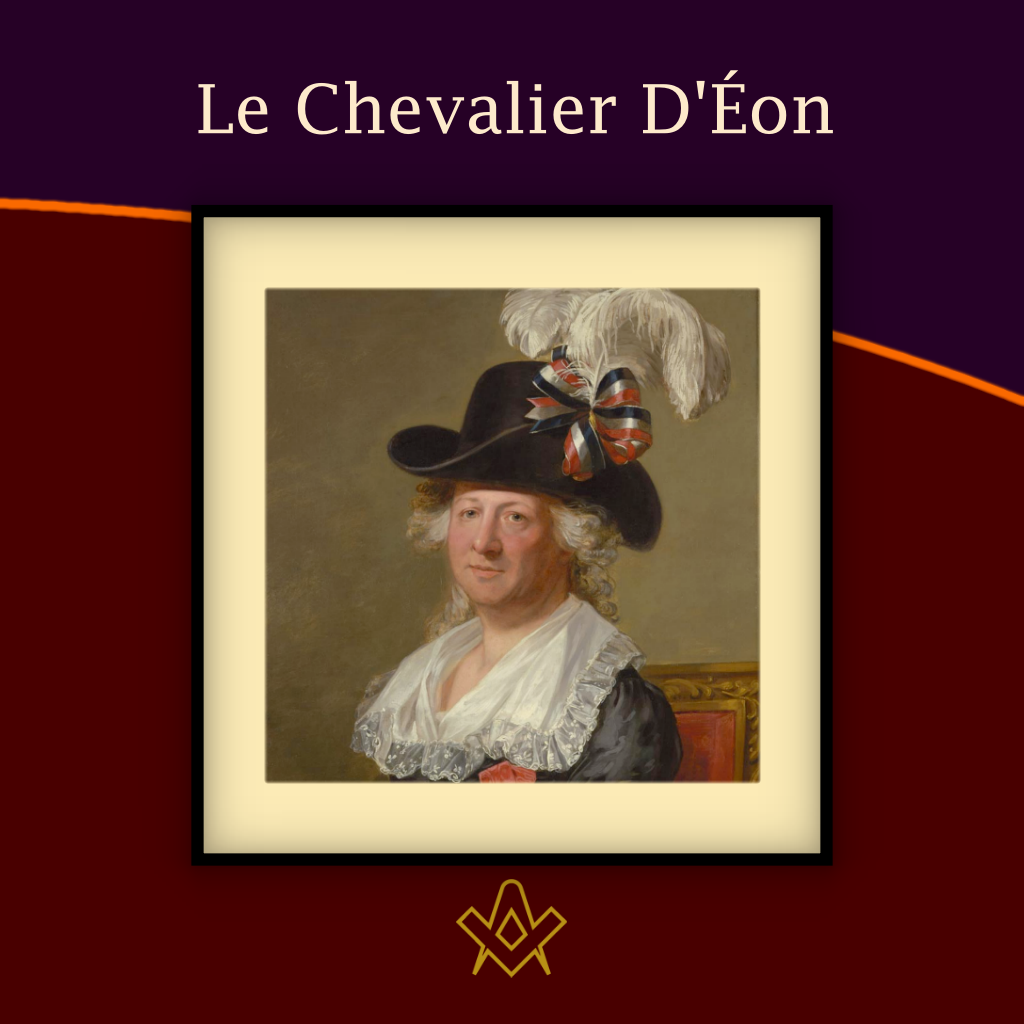 One of the most intriguing engravings of the 18th century shows an elegant lady holding a sword and staff, wearing a cross of the military order of Saint-Louis and, more bizarrely, wearing a Masonic apron. 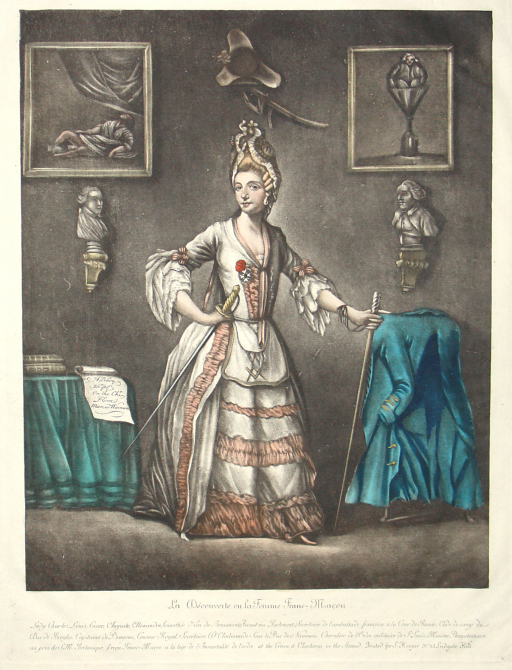 The engraving is entitled ‘La Découverte ou la Femme Franc-Maçon’ – roughly translated as The Discovery of the Female French Mason.

Rites of Adoption were not uncommon in France, with women being admitted to quasi-Masonic Orders but what was most unusual was that the woman in the picture was actually a man.

A cross-dressing author, diplomat, soldier and spy, the Chevalier d’Éon, became a legend in his own lifetime.

There is much confusion surrounding the curious case of the Chevalier d’Éon; not just with regards to his gender but also to the fake news-worthy accounts that the man himself circulated throughout his life.

Charles-Geneviève-Louis-Auguste-André-Timothée d’Éon de Beaumont was born, as a male, in Tonnerre, France on 5 October 1728. He was the son of Louis d’Éon de Beaumont, an advocate in Parliament, King’s counsellor, sub-delegate of the Intendance of the generality of Paris, and some time mayor of Tonnerre. His mother was Françoise de Charanton, the daughter of a Commissioner General and from genteel yet impoverished noble birth.

Charles went on to excel in education, graduating in civil and canon law from the Collège des Quatre-Nations in Paris in 1741.

He was soon recruited as Royal Censor and later, as secretary to Alexandre Mackenzie-Douglas, a Scottish Jacobite in French service. D’Éon accompanied Mackenzie on a diplomatic mission to Russia, where they were to attempt to improve French relations with a nation already in alliance with France’s bitter enemy – the British.

But this did nothing to put a dampener on d’Éon’s rising career in espionage; the mission was a useful cover for a more covert aim. Louis XV, envious and concerned at his cousin the Prince de Conti’s remarkable ascent to military power and allegedly nervous of a coup, wanted to make sure that there were French secret agents within the Polish and Russian courts.

This top-secret cohort of spies was dubbed le secrete du Roi (the king’s secret), amongst which was d’Éon, in a diplomatic post within the court of Empress Elizabeth. The Empress was famous for her extravagant masquerade balls, during which she often dressed as a man.

In his later autobiographical writings – of which it is hard to ascertain fact from fantasy –d’Éon claimed that he had dressed as a woman in order to infiltrate the Empress’ cercle restreint. There is no evidence to corroborate this assertion but it was grist for the gossip mill in years to come.

In 1760, d’Éon returned to France and was awarded a pension of 2000 livres for his services in Russia. The following year he fought in the later stages of the Seven Years’ War, serving at the Battle of Villinghausen in July 1761.

He was later wounded at Ultrop. In January 1762, Empress Elizabeth  died and d’Éon was considered for further service in Russia. Instead he was appointed secretary to the French ambassador in London; his mission was to help draft the Treaty of Paris that formally ended the Seven Years’ War.

After the treaty was signed on 10 February 1763, d’Éon was awarded a considerable sum of 6,000 livres, and on 30 March 1763, he was honoured with the Ordre Royal et Militaire de Saint-Louis, a reward for exceptional officers and was the first decoration that could be granted to non-nobles. Thus the Chevalier’ (or ‘Knight’) d’Éon was born.

Back in London, d’Éon became chargé d’affaires and later plenipotentiary when the ambassador returned to France. Still in the shadowy employ of King Louis’ le secrete, d’Éon thoroughly enjoyed his high-powered position, utilising it to help a French agent gather information for a possible invasion.

However, his rising star was soon to fall with the appointment of a new ambassador, the Comte de Guerchy, who immediately humiliated d’Éon by demoting him to secretary. Dismayed by his treatment, appalled with Guerchy’s politics and ignoring a recall to France, d’Éon decided to go public with certain diplomatic correspondence.

This caused an outrage but he had literally a king’s ransom on his side – the documents regarding the ‘secret invasion’ and those pertinent to le secrete du Roi, were kept back as his insurance. D’Éon was duly paid off and retained as a spy, although he was technically a political exile in London and it was during this time that he became a Freemason.

He was initiated into Lodge of Immortality No.376 in 1768; being raised in 1769 and according to later correspondence from the lodge, in a petition to the Grand Master, Charles d’Éon served as a Junior Warden from 1769 to 1770.

The lodge was constituted under the Moderns Grand Lodge and originally established for European Masons in London by a French exile called Jean de Vignoles. The lodge appears not to have survived internal feuding between the French and German members and thus it and d’Éon’s relationship with Freemasonry was closed. 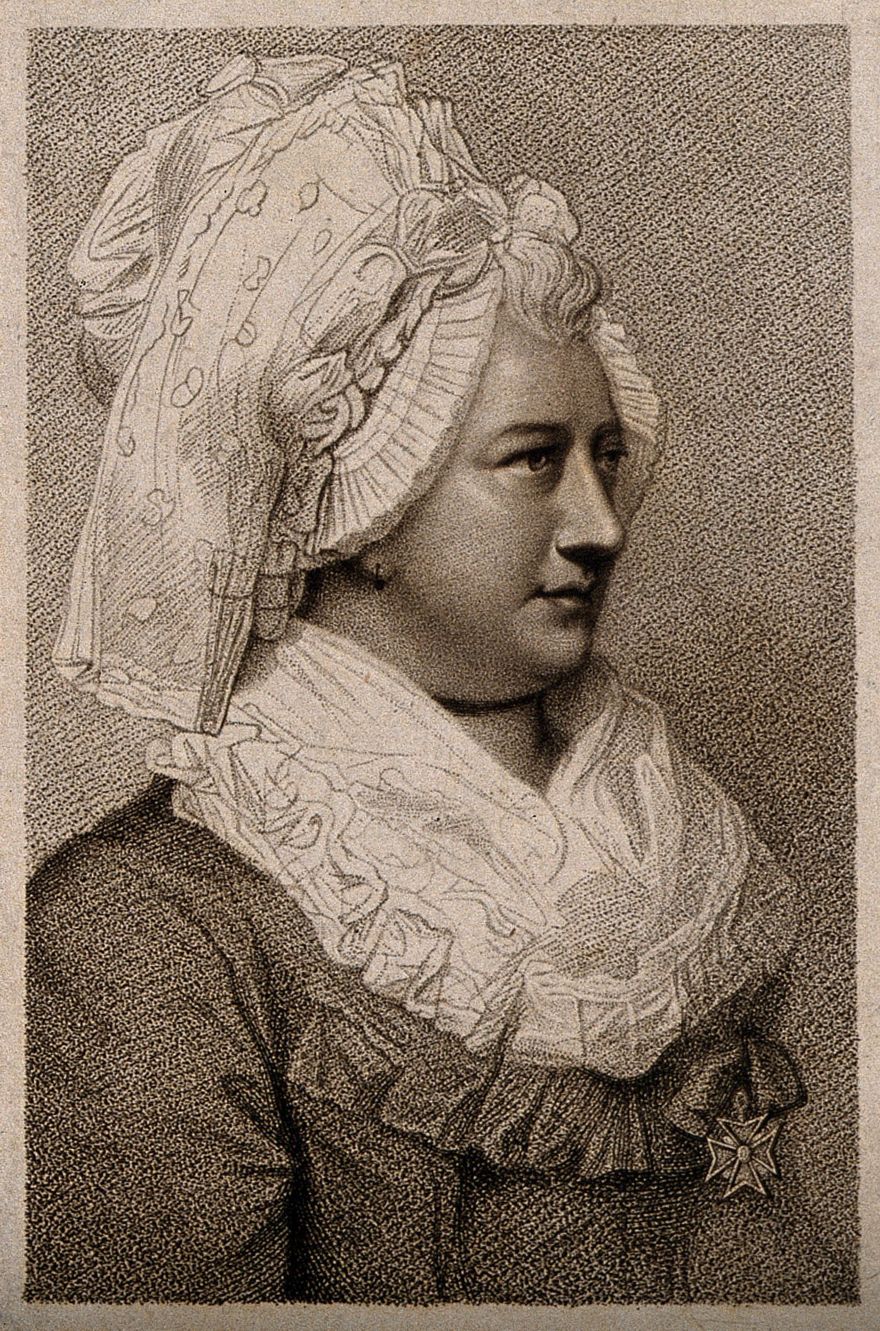 Le Chevalier D’Éon, a man who passed as a woman. Stipple engraving by T. Chambers after R. Cosway, 1787

However, also during this period, rumours began circulating that d’Éon was actually a woman; most likely started by d’Éon himself.

According to the archivist’s notes on d’Éon’s private collection of papers at the University of Leeds, he had ‘outstanding skills of persuasion to manipulate public opinion’ and the collection ‘contains many forged reports, letters, bills, accounting sheets, etc.

D’Eon even produced fake authenticity letters to certify that forged documents were genuine…and many of the dates written on the documents – and even their contents – are therefore dubious.’ 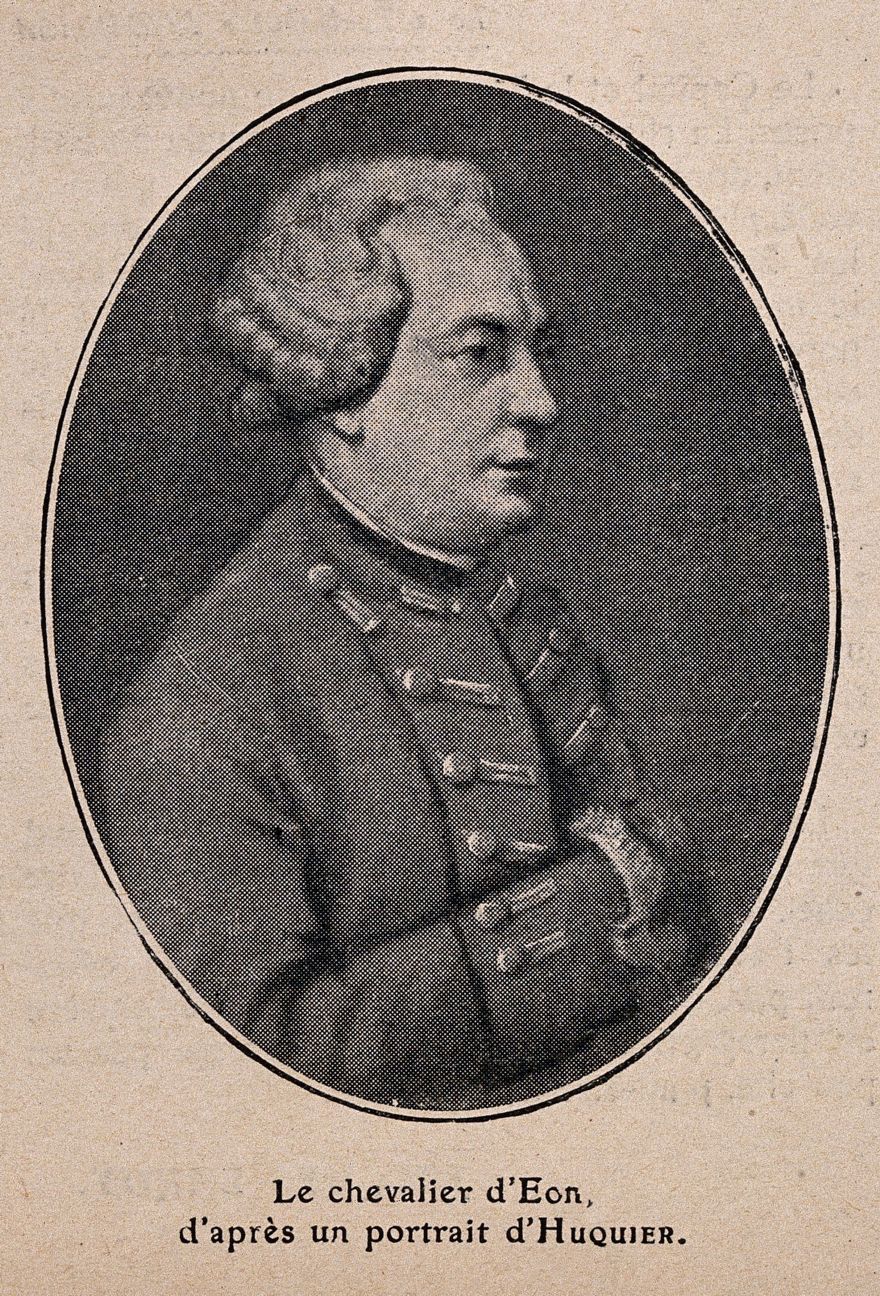 According to d’Éon, he had been born as a female but forced to dress as a boy so as not to forfeit the family’s inheritance; or that he had been forced to cross-dress by the king in his service for le secrete du Roi; conveniently for him, anyone connected with these missions had since passed away and so this assertion could not be denied.

Remarkably, the gossip gained huge traction and a betting pool was set up on the London Stock Exchange in regard to d’Éon’s actual sex. More bizarrely, the man himself was invited to take part, which he declined on the reasoning that he would be dishonoured by an examination regardless of the outcome.

After a year with no resolution, the fickle capital dwellers moved on to more interesting pursuits. But for d’Éon, things were about to change radically.

With the death of Louis XV in 1774, le secrete was abandoned and d’Éon jumped at the chance to return to his native France. After months of negotiations he was permitted to return and retain his ministerial pension in exchange for the correspondence relating to le secrete du Roi.

However, there was one defining condition of his return – he must renounce his ‘manhood’ and live as a woman; the command was issued in 1777; ‘By order of the king: Charles-Geneviève-Louise-Auguste-Andrée-Timothée d’Éon de Beaumont is commanded to leave off the dragoon’s uniform which she is wearing, and to dress according to her sex.’ For the next 32 years, female attire and attribution were forced on d’Éon but now faced with a restrictive patriarchal society, he eventually went into retirement.

D’Éon spent his last years in London, living with a widow called Mrs. Cole. He died on 21 May 1810, after which an official autopsy was carried out; he was duly pronounced male.

Aleister Crowley, although made a Freemason in France, held a desire to be recognised as a 'regular' Freemason within the jurisdiction of UGLE – a goal that was never achieved.

Banks was also the first Freemason to set foot in Australia, who was at the time, on a combined Royal Navy & Royal Society scientific expedition to the South Pacific Ocean on HMS Endeavour led by Captain James Cook.

This month, Kenneth Jack invites us to look at the life of Sir William Peck; - astronomer, Freemason and inventor of the world's first electric car. A truly fascinating life story.

Making a Mason in Prison

Making a Mason in Prison: the John Wilkes’ exception?

The debate is on! Two eminent Masonic scholars go head to head: Yasha Beresiner proposes that Elias Ashmole was 'a Masonic hero', whereas Robert Lomas posits that Ashmole was a 'scheming chancer'.

"To be a good man and true" is the first great lesson a man should learn, and over 40 years of being just that in example, Dr Buck won the right to lay down the precept.

The 6th Duke of Atholl - Chieftain, Grand Master, and a Memorial to Remember

In 1865, why did over 500 Scottish Freemasons climb a hill in Perthshire carrying working tools, corn, oil and wine? Author Kenneth Jack retraces their steps, and reveals all.

We are all familiar with the comic operas of Gilbert and Sullivan, but did you know Sullivan was a Freemason, lets find out more….

A Mother Lodge and a Connection Uncovered, a claim that Sir Robert Moray was the first speculative Freemason to be initiated on English soil.

The reputation of the Huguenot Freemason, has been buffeted by waves of criticism for the best part of three hundred years.

The life of Bro. Cattanach, a theosophist occultist and Scottish Freemason

Was William Morgan really murdered by Masons in 1826? And what was the lie Masonic author Rob Morris told? Find out more in the intriguing story of 'The Morgan Affair'.

Bridging the Mainstream and the Fringe

A Masonic author and Provincial Grand Master of Forfarshire in Scotland

Who was Philip, Duke of Wharton and was he Freemasonry’s Loose Cannon Ball ?

Will the real author behind The Manual of Freemasonry please stand up!

A cross-dressing author, diplomat, soldier and spy, the Le Chevalier D'Éon, a man who passed as a woman, became a legend in his own lifetime.

Mozart Freemasonry and The Magic Flute