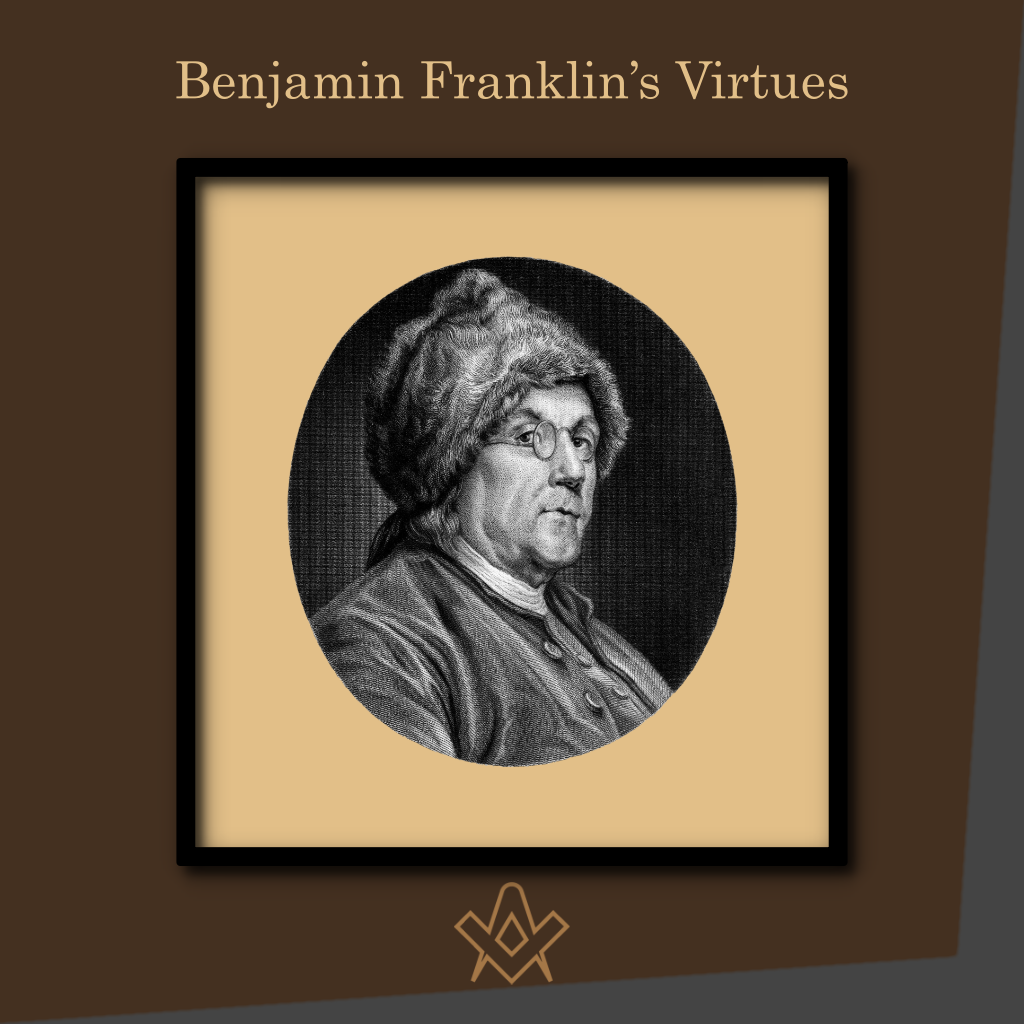 When Benjamin Franklin (1706-1790) composed his Autobiography, he included the description of a self-improvement method that he had devised in his younger years, along with an honest assessment of his varied success in applying it to his conduct throughout his life.

Progress and setbacks in mastering the traits were tracked daily in a grid chart, which had the seven days of the week running horizontally and the thirteen traits running vertically.

After thirteen weeks, Franklin began the cycle again, so that over the course of a year each behavioural trait could be carefully worked on for four weeks. 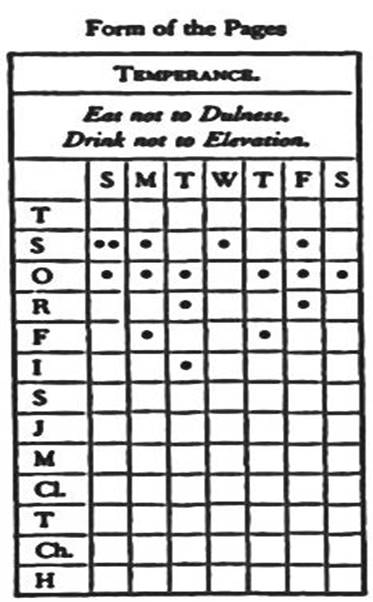 He began devising this self-improvement method in his twenties, and had originally intended to devote a book to its elaboration.

In the Autobiography Franklin laments that due to his many other concerns over the years he never accomplished this task:

‘I should have called my BOOK the ART of Virtue…But it so happened that my Intention of writing & publishing this Comment was never fulfilled…the necessary close Attention to private Business in the earlier part of Life, and public Business since, have occasioned my postponing it.’

Producing this book was part of ‘a great and extensive Project’ envisioned by Franklin: the formation of an international secret fraternity and mutual-aid society, ‘the Society of the Free and Easy’.

Its initiates were to profess a belief in a generic religious creed, so that people of all religions would be able to join and were to follow ‘the Thirteen Weeks Examination and Practice of the Virtues’.

In Franklin’s plan, the society’s worldwide members would comprise a ‘united Party for Virtue’:

‘My Ideas at that time were, that the Sect should be begun & spread at first among young and single Men only…[and] that the existence of such a Society should be kept a Secret till it was to become considerable, to prevent Solicitations for the Admission of improper Persons.’

Franklin had an affinity for exclusive, men-only groups, and enjoyed fraternities and secret societies.

In 1727, when he was twenty-one, he co-founded the Junto, a Philadelphia-based discussion and mutual aid society limited to twelve male members.

He joined the Masonic fraternity in 1731, and soon began making plans to create the Party for Virtue, as well as plans to compose a book on virtue for use by young people and the party’s prospective members.

As Norman Fiering notes in his ‘Benjamin Franklin and the Way to Virtue’ (1978), Franklin’s projected worldwide fraternity easily calls the Masonic fraternity to mind.

Freemasonry may have been the model for his Society of the Free and Easy, which was meant to be much larger than the Junto and to have a global impact.

Franklin’s vigorous participation in the Masonic fraternity – he was elected Grand Master of Pennsylvania in 1734, just a few years after becoming a Freemason – may also have been a factor in the project’s prolonged postponement, though, as Freemasonry already satisfied some of the same functions as the new society he hoped to form.

Gordon Wood suggests in The Americanization of Benjamin Franklin (2004) that the busy young man ‘discovered just the organization he was looking for’ in Freemasonry and did not have a pressing need to create a new one.

Nonetheless, the fact that Franklin wished to found a new Masonic-like fraternity that would be open to members of all faiths and promote virtue across the globe also indicates that, at least to some degree, he did not consider Freemasonry to be sufficiently capable of fulfilling such a role.

In the end, Franklin neither wrote his book on, nor formed his fraternity for, virtue.

However, nearly twenty years after Franklin’s death, and half way across the world from Philadelphia, the early Eastern European maskil (Jewish enlightener) Rabbi Menachem Mendel Lefin [also Menahem Mendel Levin] of Satanów (1749-1826), succeeded in completing and publishing a Hebrew text based on Franklin’s self-improvement method.

Its purpose may have surprised Franklin, for instead of this being a work for the use of the ‘Virtuous and good Men of all Nations’, whom Franklin had envisioned as the members of his party, Lefin’s 1808 Sefer Heshbon HaNefesh (Book of Spiritual Accounting) was written specifically for the moral and spiritual edification of his fellow Jews.

Although Lefin stated outright in Spiritual Accounting (which was first published anonymously) that its innovative method was not his own discovery, he did not name Franklin or cite the Autobiography there, simply writing that:

‘a few years ago a new technique was discovered, and it is a wonderful invention in this task [of character-improvement], and it seems this innovation will spread quickly, God willing, as with the invention of the printing press, which brought light to the world’. 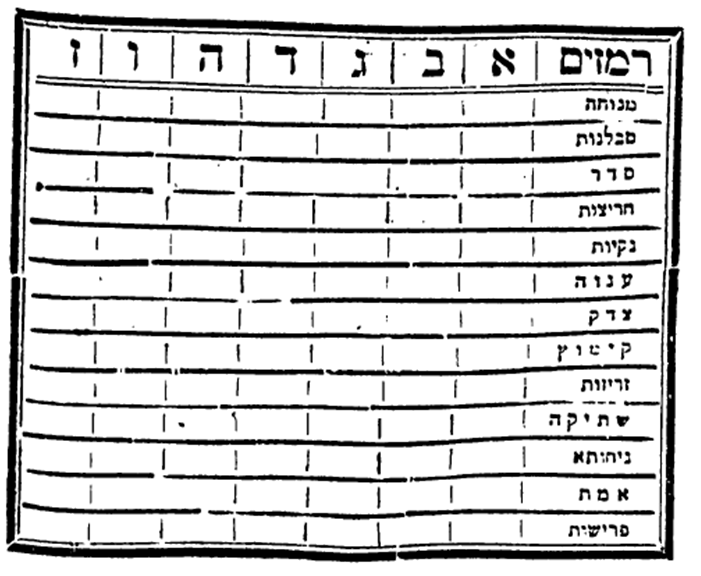 Jewish scholars who have discussed this (including Hillel Levine, Immanuel Etkes, and David Shahar) have generally viewed it as a deliberate omission on Lefin’s part.

Whether or not Lefin was purposely obscure, however, Franklin’s influence was not entirely unknown in Lefin’s day, as is evident from an 1815 Hebrew letter written by the prominent Jewish enlightener Jacob Samuel Bick, who described Spiritual Accounting’s self-improvement method as:

A wonderful technique invented by the sage Benjamin Franklin from the city of Philadelphia in North America. This scholar is renowned in all corners of the earth…Thus R[abbi] Mendel has prepared a delicacy for his nation…and taught a simple and clear solution for the broken but still precious soul to speedily return from the bad to the good. In their approbation, the rabbis of the generation said that this thing is beneficial and new. And the [Jewish] nation replied in turn: Sanctified! Sanctified!

Even so, Lefin’s omission of Franklin’s name in Spiritual Accounting resulted in eventual widespread Jewish forgetting of the fact that Franklin had originated its method.

The Hebrew-English edition of Heshbon HaNefesh, put out by Feldheim Publishers in 1995, for example, is entirely silent about Franklin’s influence.

That edition’s back cover also offers a misleading depiction of the character-improvement method in Spiritual Accounting, suggesting — contrary to Lefin’s own words acknowledging that the method preceded him — that it is unique to the work, was formulated by Lefin, and was designed specifically for Jews:

CHESHBON HANEFESH, first published in Lemberg in 1812 [sic], presents a unique system for self-improvement and the development of positive character traits. Employing sophisticated psychological techniques and charts to monitor one’s progress, this method was designed specifically for bnei Torah [i.e., those intensively engaged in the study of Torah] and is as applicable today as it was when it was first formulated, nearly 200 years ago.

Nancy Sinkoff observes in ‘Benjamin Franklin in Jewish Eastern Europe: ‘Cultural Appropriation in the Age of the Enlightenment’ (2000) that Lefin was drawn to Franklin’s method for the very same reason that Franklin had originally been compelled to devise it.

Franklin’s approach to virtue and religion contributed to the ease with which Lefin was able to adapt Franklin’s method and make it a part of accepted Jewish practice.

From the outset, Franklin had sought to make his system for self-improvement, as well as the international fraternity whose members would adhere to it, universally accessible.

He explained the rationale for this non-sectarian approach in the Autobiography:

It will be remark’d that, tho’ my Scheme was not wholly without Religion there was in it no Mark of any of the distinguishing Tenets of any particular Sect. I had purposely avoided them; for being fully persuaded of the Utility and Excellency of my Method, and that it might be serviceable to People in all Religions, and intending some time or other to publish it, I would not have any thing in it that should prejudice any one of any Sect against it.

As Franklin took this non-sectarian approach, there were no philosophical or religious obstacles to prevent his method’s use within a Jewish context.

Spiritual Accounting received the approbation of prominent rabbis, was embraced by the Jewish ethical Mussar movement, and became one of the many Hebrew texts still studied in yeshivot, furthering Franklin’s initial goal of making his system for self-examination and character improvement ‘serviceable to People in all Religions’.

Fun Fact: The Junto was also known as the Leather Apron Club

Shai Afsai lives in Providence. He is a member of Rhode Island’s Redwood Lodge No. 35 and is a charter member and fellow of the Collegium Luminosum, Rhode Island’s research lodge.

His ‘Benjamin Franklin and Judaism’ appears in Journal of the American Revolution, Annual Volume 2018.

His ‘Benjamin Franklin’s Influence on Mussar Thought and Practice: a Chronicle of Misapprehension’ appears in Review of Rabbinic Judaism 22 (2019).

Sinkoff, Nancy. (2000). ‘Benjamin Franklin in Jewish Eastern Europe: Cultural Appropriation in the Age of the Enlightenment’. Journal of the History of Ideas. 61. 133-152. 10.1353/jhi.2000.0010. https://www.researchgate.net/publication/236765019_Benjamin_Franklin_in_Jewish_Eastern_Europe_Cultural_Appropriation_in_the_Age_of_the_Enlightenment

The Autobiography of Benjamin Franklin

The Autobiography of Benjamin Franklin is the traditional name for the unfinished record of his own life written by Benjamin Franklin from 1771 to 1790; however, Franklin himself appears to have called the work his Memoirs. Although it had a tortuous publication history after Franklin’s death, this work has become one of the most famous and influential examples of an autobiography ever written.

Franklin’s account of his life is divided into four parts, reflecting the different periods at which he wrote them. There are actual breaks in the narrative between the first three parts, but Part Three’s narrative continues into Part Four without an authorial break (only an editorial one).

In the “Introduction” of the 1916 publication of the Autobiography, editor F. W. Pine wrote that Franklin’s biography provided the “most remarkable of all the remarkable histories of our self-made men” with Franklin as the greatest exemplar.

The Americanization of Benjamin Franklin

From the most respected chronicler of the early days of the Republic – and winner of both the Pulitzer and Bancroft prizes – comes a landmark work that rescues Benjamin Franklin from a mythology that has blinded generations of Americans to the man he really was and makes sense of aspects of his life and career that would have otherwise remained mysterious.

In place of the genial polymath, self-improver, and quintessential American, Gordon S. Wood reveals a figure much more ambiguous and complex–and much more interesting.

Charting the passage of Franklin’s life and reputation from relative popular indifference (his death, while the occasion for mass mourning in France, was widely ignored in America) to posthumous glory, The Americanization of Benjamin Franklin sheds invaluable light on the emergence of our country’s idea of itself.

Lift yourself higher; transform yourself into the person you want to be. Far from pop-culture self-help books, this is a work developed over two hundred years ago by R’ Menachem Mendel Levin, a prolific writer and Torah scholar whose breadth of knowledge is astonishing. Drawing from classic sources to form a step-by-step program for self-improvement and character refinement, this book gives hope and help to all who wish to perfect themselves. With its facing Hebrew and English translation, this book is so important that R’ Yisrael Salanter, recognizing its true worth, encouraged a group of students to republish it in 1845, with a foreword by Rabbi Yitzchok Isaac Sher of Slobodka, also included in both Hebrew and English in this work. 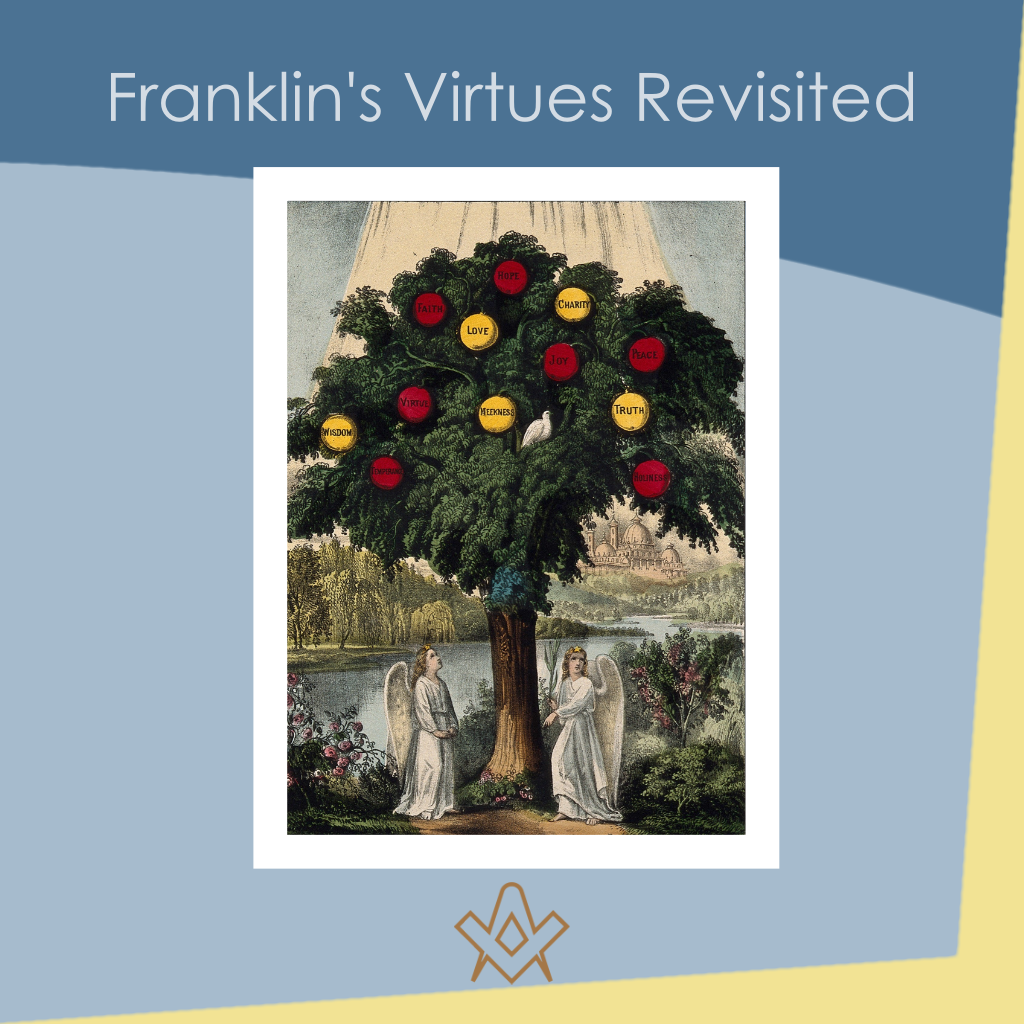 How are the virtues and the pursuit of self-improvement and knowledge as pertinent for today’s Mason, as they were for Benjamin Franklin.  …read more 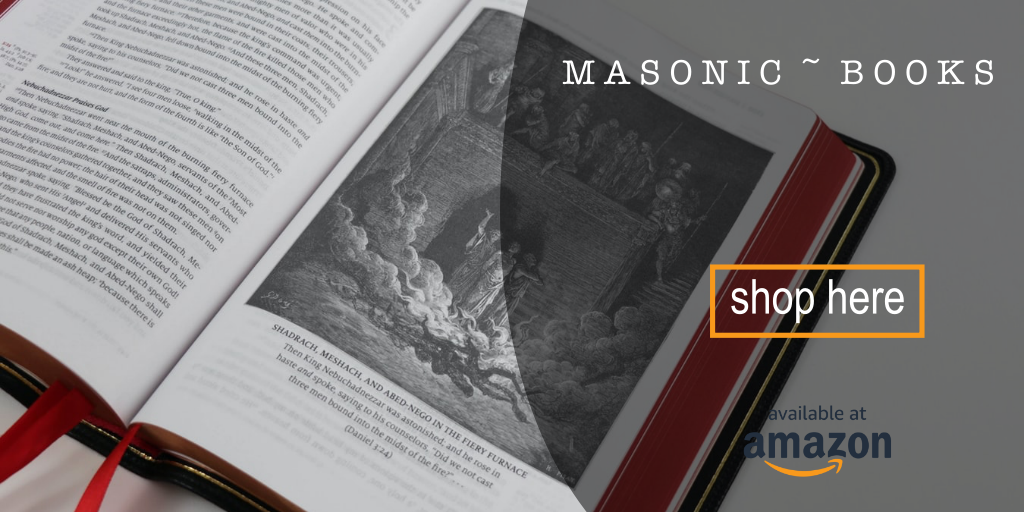