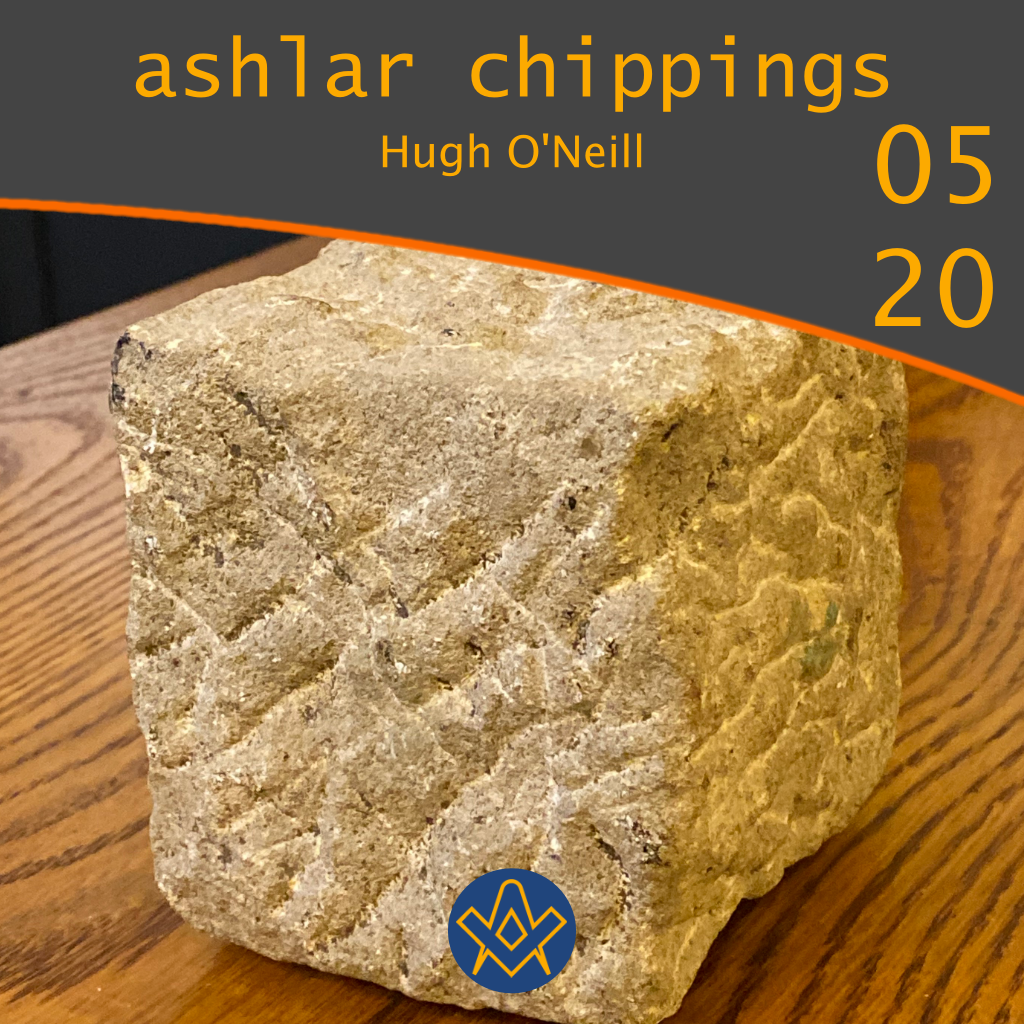 During 1964 the lengthy argument about whether or not it was appropriate for penalties, symbolic though they were, should be included in the wording of the obligations.

The argument became quite fierce at times at all levels from private lodges to the Grand Lodge itself. The image here is a small portion of one of the letters dated 15th October 1964 showing the tenor of argument: 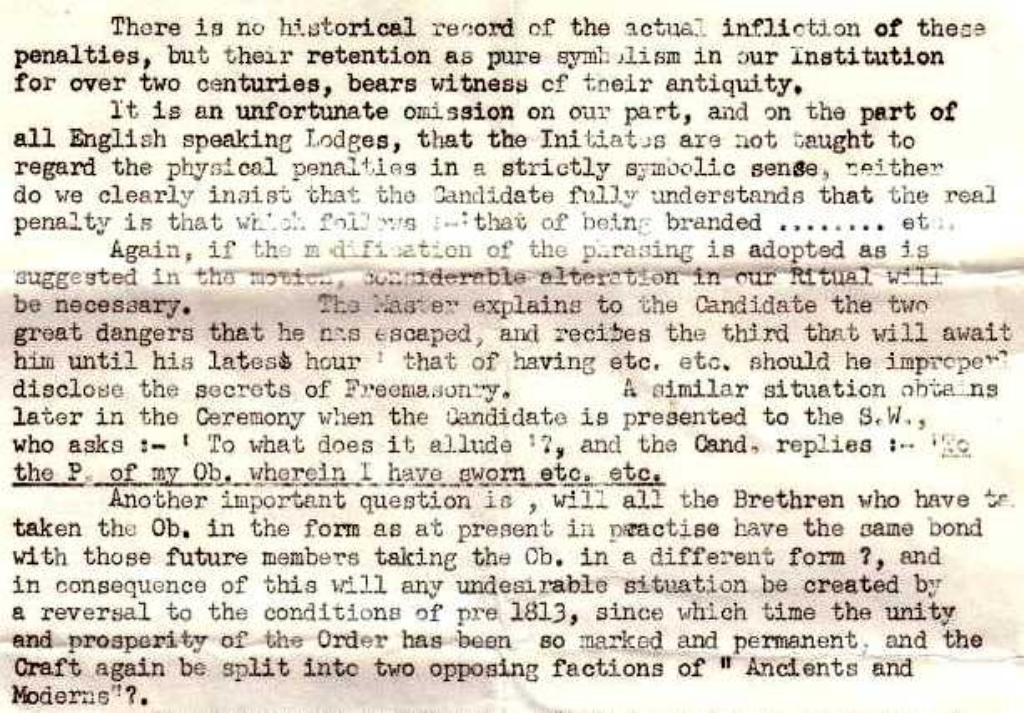 The upshot was that Grand Lodge debated the matter and issued an instruction that lodges should decide for themselves whether or not to use a ‘permissive variation’ of the obligation with the penalties removed from the wording of the obligation but explained later in the ceremony.

Lodges then voted on the matter; some for and some against the permissive variation.  Some, like my own, voted to try the variation for a period and revisit the question later.  In our case after five years, as with other lodges, the decision was to revert to the traditional form.

However, in 1984 Grand Lodge mandated that the permissive variation was to become permanent and so it is.  Grand Lodge, cognisant of the reasons behind rule 155 Book of Constitutions, avoided imposing any particular words, leaving that to each lodge to determine for itself.

I am reminded of a story, within my own experience, of a bright young Candidate, who on being asked “Do you believe in God ?” hesitated a moment and said “Well, it depends on what you mean by God”.  The Committee were momentarily shocked by what seemed to be a rather careless or casual reply.  But the W.M. remained unruffled – and very quietly he continued:-

The Candidate was a good talker, but he talked himself out of that lodge, and was not admitted. 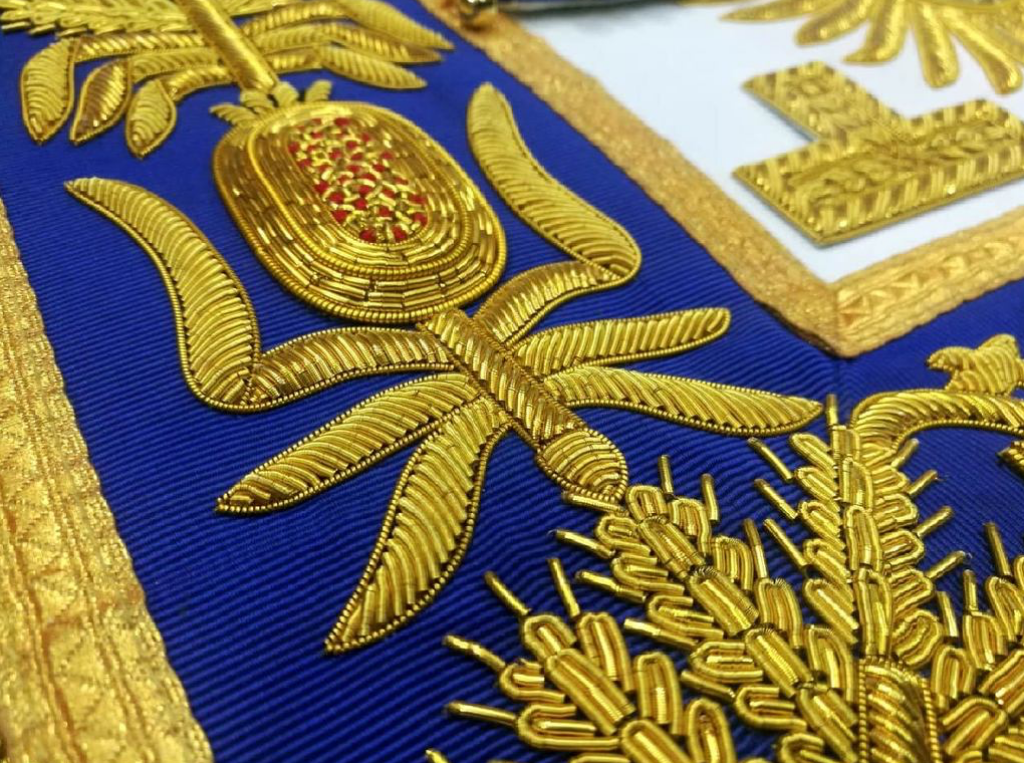 During a normal summer recess, it is common practice for Provinces to hold their Annual General Meetings. This year, the suspension prohibits these occasions.

Some provinces will perforce be expecting to replace a resigning Provincial Grand Master. Book of Constitutions rule 63, details the appointment by the Most Worshipful the Grand Master by his patent. However, although the patent may be issued, this rule holds that it cannot come into full effect until the Provincial  Grand Master Designate has been installed at the first Provincial Grand Lodge, which he has summoned, after his appointment.

So, the current Provincial  Grand Master having resigned and his prospective successor having received the patent, the rule prevents him from exercising the normal functions of that office until he is installed – what now?

This would appear to remain so in this case of suspension preventing the installation taking place. In many instances a current Deputy may be the Prov GM designate but under these two rules he cannot be entitled to the designation of Prov GM until he has actually been installed at the above mentioned Provincial meeting.

Further, rule 3 allows ‘substituted authorities’ (which can be interpreted as including a Deputy Provincial  Grand Master  in Charge) to act in Grand Lodge with the same validity as the brother he represents.

So, without so much as a blink, the rules of UGLE cover, with clarity and simplicity, a matter which some may see as deeply complex.