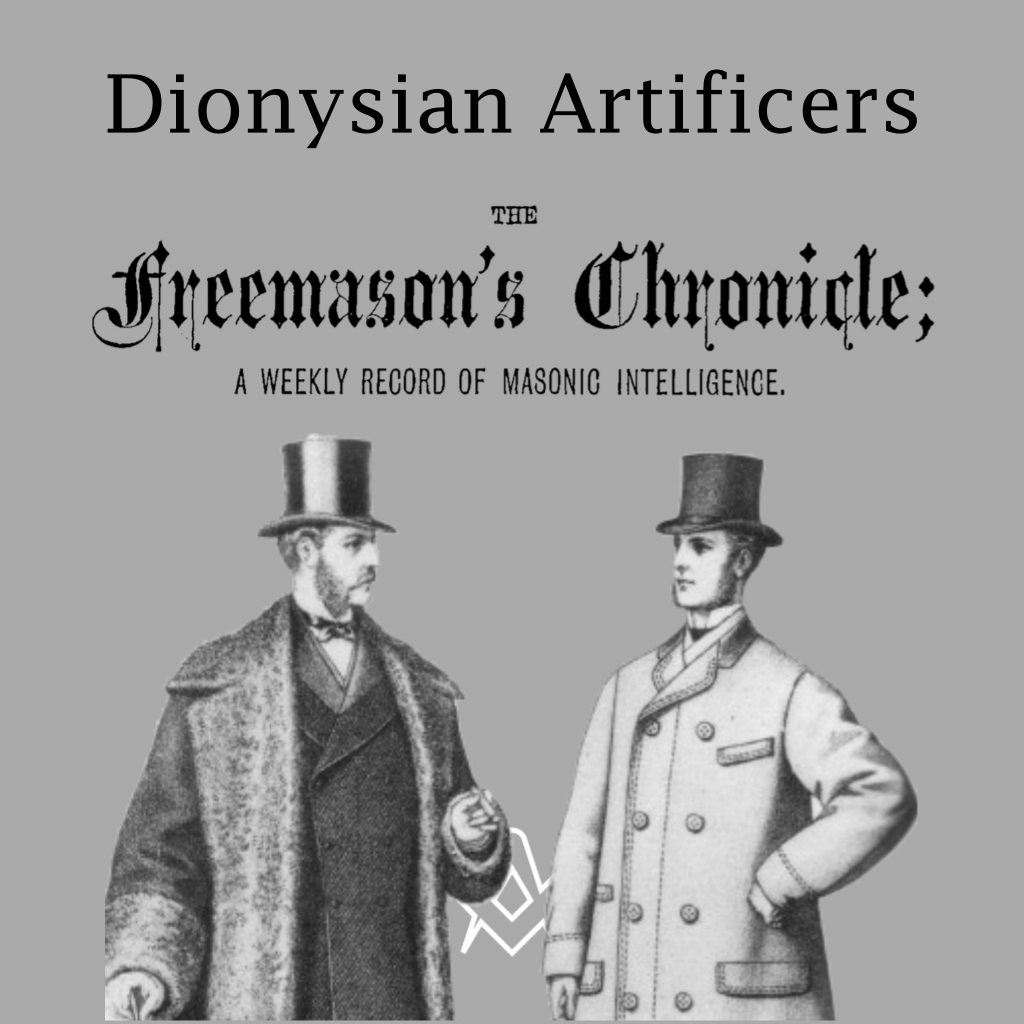 Sketch for the History of the Dionysian Artificers,” a fragment, by Hyppoli to Joseph Da Costa, Esq. London: Sherwood, Neely and Jones. 1820.

This little work may be regarded as, so to speak, the Holy Grail of Masonry.

Although it was written only forty-five years ago, [101 years ago today] it is so scarce that the bibliomaniac may almost look in vain for a copy of it.

The late Dr. Crucefix, the projector of the Royal Masonic Benevolent Institution, made diligent search for the work during twelve years, and died without success.  He had the highest opinion of its value.

Mr. R. Spencer sought in vain for it from 1848 until 1872, and we are indebted to the kindness of his son, Mr. W. Spencer, for the loan of the copy which lies before us.

It is, we believe, the only work in which are summarised the proofs of the resemblance of Freemasonry to the mysteries of Dionysus.

The author accurately quotes the authorities for his facts and opinions, and to this circumstance, as well as to the clear and concise style in which he has condensed a vast mass of unique information, the work owes much of its fame.

In these days, when a taste for speculative Masonry has been excited by the labours of modern philologists and archaeologists, a reprint of the work would be of the greatest value to the student.

We are proud to admit that a few learned and enthusiastic brethren are toiling with us in the congenial field of speculative research, and to those who desire to trace for themselves the fragments of the Dionysian mysteries, which are scattered through the literature of Greece and Rome, this little work would prove an invaluable guide.

Mr. Da Costa, the author, must have been a man of profound learning, and of large and liberal ideas.

His fragmentary sketch was written at a time when anything like a just appreciation of the mythology or religion of ancient Egypt or Greece was very rare.

It was the common opinion of men who passed for authorities that the system of ethics, which guided the wonderful people who flourished for so many ages ago on the banks of the Nile, was a degraded one, that their religion was a jumble of immoral fables and pseudo science, and that the gross degradation into which the Hellenic tribes sank was to be ascribed to the influence of their so-called superstitions upon the minds of the people

Even in these days of comparative toleration and enlightenment we occasionally come across a writer who is ignorant enough to confess his belief in the gross ” paganism ” of the ancient Egyptians, and the pulpit still resounds with the fierce denunciations of their supposed spiritual darkness.

Mr. DaCosta traces the ancient sun worship to a people living as far north as latitude 66°, in fact to the Atlantides, and thus raises the question which has so long troubled the minds of the learned, as to whether an island or continent, once the seat of civilisation, has or has not been submerged by the sea.

Atlantis is assumed by some writers to be the continent of America, and the significant fact that in Mexico archaeological remains and a system of picture writing, similar to that which prevailed in Egypt, have been found, would appear to give some colour to the theory.

That sun worship originated with a people where the great luminary of day was but a fitful visitant would appear to be a feasible idea, and its development southward in America and Asia may possibly be ultimately traced.

Scythia, that mystic region of the ancient Greeks, appears to the author to be the original seat of this worship.

To the Greeks Scythia was regarded as the earth’s remotest boundary, and readers of Aeschylus will remember that he lays the scene of the binding and punishment of the fabled Prometheus in this portion of the world.

The suggestion that Zoroaster was a Scythian can, we think, be scarcely supported by facts, but we readily agree with the writer that the teachings of this great man may have been imported from a northern clime.

That Egypt was indebted to a people living east of the Nile for its religious ceremonies is, we think, a fact that will sooner or later be clearly established.

That the Egyptians were Asiatic admits of no doubt. The type of face which is so familiar to all Egyptologers is not in the remotest degree African in its general outlines.

The Egyptian physique is slight, and affords a singular contrast to that of the lusty negro, whose muscular frame and low order of intelligence mark him as a being of an entirely different race.

We regard the Egyptians as colonists who, at a remote period, settled on the banks of the Nile, bringing with them the civilisation of Asia, and the germs of a religion which afterwards assumed a distinct type of its own.

The Osirian story, the earliest known myth of Egyptian theology, which may have been derived from the Persians, lies at the root of these Eleusinian rites, which are better known to most Masonic readers as the mysteries of Dionysius or Bacchus.

These consisted in the study of the sciences and useful arts, united with theology and ethics, and were communicated by cyphers or symbols.

Candidates for admission were required to be of pure life, and were rigidly examined, by properly appointed persons, before initiation.

The pith of the doctrine taught may be summed up in a few words.

The future state of the soul, and future rewards and punishments ; indeed, so high an estimate had the teachers of the value of the spiritual life, that the union of the soul with the body was regarded as its death, and the death of the body its resurrection.

In later Greek history these sublime ideas were no doubt degraded by the gross sensuality into which the Greeks had fallen, but their original purity is a fact, which no scholar will now dispute.

In Rome, the depravity of those who practised the Bacchanalian mysteries was the cause of great public scandal, and some of the early Christian writers, who knew nothing of their original meaning, were able to draw up a terrible bill of indictment against the decaying civilisation, upon the surface of which these per-verted ideas floated like scum.

It is to a colony of Greeks, settled in Asia Minor, that we are apparently indebted for the transmission of the rites of Bacchus, allied with the scientific truths of Craft Masonry, to modern Europe.

These Ionian Greeks were builders, and formed a society for the purposes of their calling. They were called the Dionysian Artificers, and they gradually spread themselves into Syria, Persia and India.

They extended their moral views in conjunction with the art of building to many useful purposes, and to the practice of acts of benevolence.

Prom Ionia or Asia Minor these artificers passed to Judea, and assisted in the building of the Temple which Solomon reared in honour of the tutelary God of Israel.

We cannot, however, agree with our author in the view quoted from Josephus that these artificers introduced the Grecian style of architecture into Judea.

Grecian details may undoubtedly have been used in the construction of the Temple, but its ground plan was so clearly Egyptian that we are inclined to the opinion that its main structural features were copied from the great buildings which lined the banks of the Nile.

That these artificers taught the mysteries which were mixed up with Masonry to the Jews, is undoubted, and it is supposed, from references in the great work of Josephus, that the sect of Essenians, of which John the Baptist is said to have been a member, grew out of this association of the mysteries of Bacchus with the ethical ideas common to the Jew.

Christianity itself appears to have been slightly tinged with the Essenian philosophy, and M. Renan has not hesitated to avow his belief that its divine founder was familiar with the dogmas of the sect.

We, while holding that Christianity stands alone, and is indebted to no human system for its sublime teachings, do not deny that its pure morality, and its early theories of communism find their counterpart in the views of the devout people, who, with John for a spokesman, prepared the way for a higher teaching and broader views of the social and spiritual duties of mankind.

It is needless for us to refer here to the pall of darkness which obscured all the light of the ancient world in the second and third centuries of our era.

In the night of the middle ages the teachings of the ancient sages were forgotten, and it was only with the revival of learning that the few remaining fragments of their teachings were gathered together and reanimated.

We here take leave of this interesting fragment, which has afforded us a text for these equally fragmentary remarks, and we cannot but regret that the work of Mr. Da Costa is so little known to our brethren and the world.

The Dionysian Mysteries were a ritual of ancient Greece and Rome which sometimes used intoxicants and other trance-inducing techniques (like dance and music) to remove inhibitions and social constraints, liberating the individual to return to a natural state.

It also provided some liberation for men and women marginalized by Greek society, among which are slaves, outlaws, and non-citizens.

In their final phase the Mysteries shifted their emphasis from a chthonic, underworld orientation to a transcendental, mystical one, with Dionysus changing his nature accordingly.

By its nature as a mystery religion reserved for the initiated, many aspects of the Dionysian cult remain unknown and were lost with the decline of Greco-Roman polytheism; modern knowledge is derived from descriptions, imagery and cross-cultural studies. 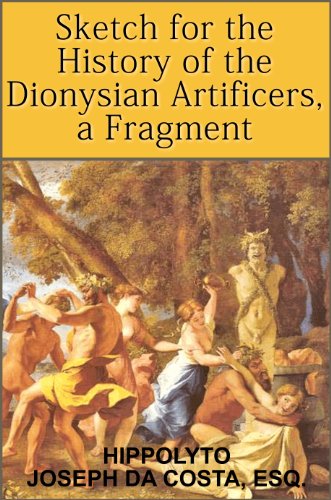 Sketch for the History of the Dionysian Artificers, a Fragment

Sketch for the History of the Dionysian Artificers, a Fragment, published in 1820, was an attempt to prove that modern Freemasonry derived from ancient Greek philosophical and religious ideas.

He was imprisoned for being a Freemason by the Inquisition in Portugal in 1802 and escaped in 1805.

He later settled in London and wrote a two volume book about his experiences, Narrativa da Perseguição, in 1811.

He went on to start the first Brazilian periodical, the Correio Braziliense or Armazém Literário for which he is known today as “the founder of the Brazilian Press”.

The original is extremely rare and was scanned from a reprint by the Philosophical Research Society Press dated 1936, which notes that it was “made possible through the courtesy of the Masonic Grand Lodge Library at Cedar Rapids, Iowa”.