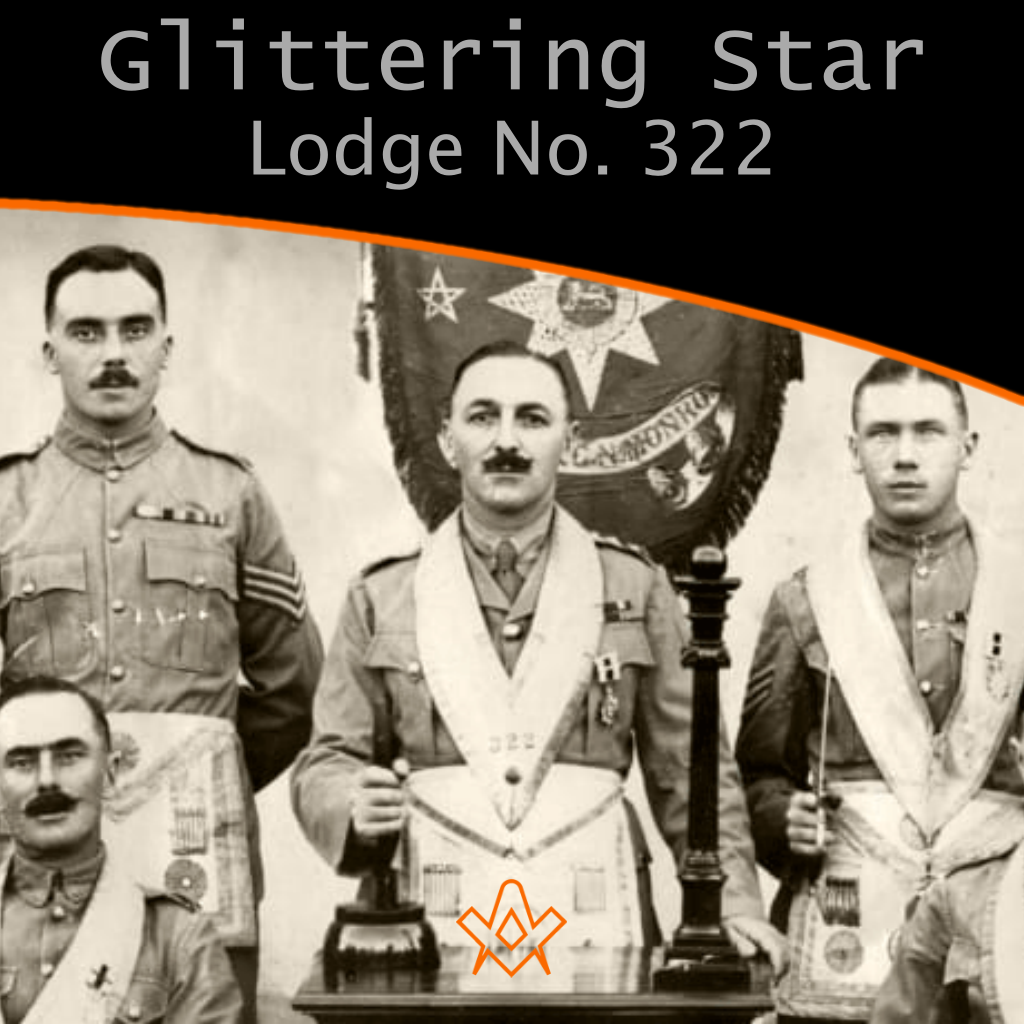 Lodge Glittering Star 322 I.C. is a travelling lodge, founded in 1759 in Kilkenny, Ireland, by members of the 29th Regiment of Foot.

The regiment has had a colourful history, having been raised in 1694 by a Colonel of the Coldstream guards. 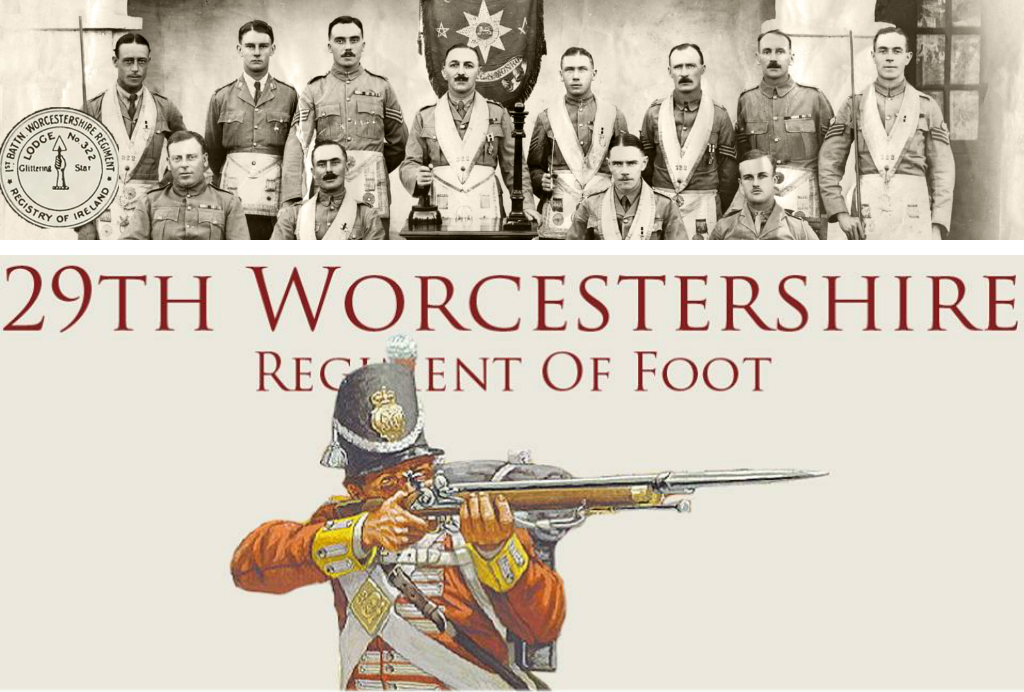 The lodge is the oldest continuous travelling lodges in existence that works under a military warrant.

Although attached to an English regiment is in fact warranted under the constitution of the Grand Lodge of Ireland (GLI).

The ritual it uses has remained unchanged since the date of its inception.

The 29th Regiment of Foot were involved in the American War of Independence, and it was during this time that members of the lodge were instrumental in forming the Provincial Grand lodge of Massachusetts.

Lodge meetings were frequently held at the Green Dragon tavern, Boston. It is recorded that the first Provincial Grand Master was Dr Joseph Warren, and his two wardens were members of Lodge Glittering Star – Captain Jeremiah French and Captain Ponsonby Molesworth. 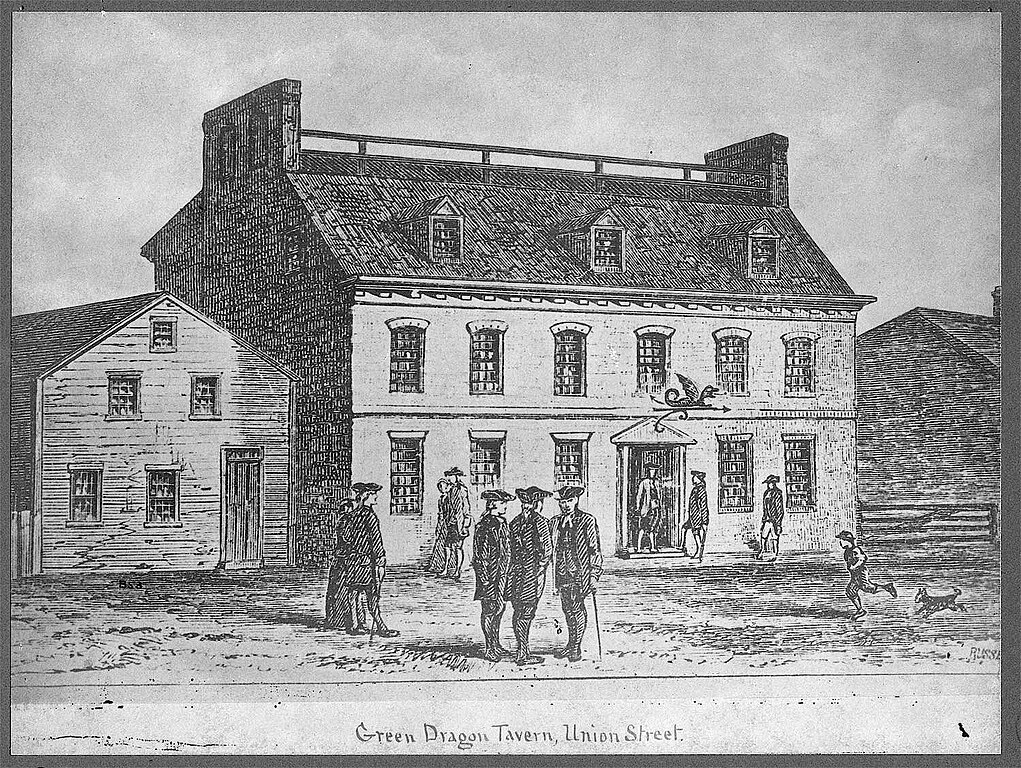 During this period, members of the lodge were also involved in conferring the Royal Arch Degree, and in 1769 it is recorded that one William Davis P.M. of Lodge 58 in the 14th Regiment of Foot received four degrees, those of Excellent, Super-Excellent, Royal Arch and Knight templar, this was the first mention of the Knight Templar degree in the Americas.

The 29th Regiment, along with the lodge, were removed from the Americas after the end of the War of Independence.

Records held in the museum at GLI show that the lodge was again active in Canada between 1802-1807 when included in its proceedings were activities relating to the Royal Arch degree.

There is then a gap of some several years between 1831 and 1854 when the lodge went dormant.

The regiment at this time were based on the island of Mauritius.

The lodge was resurrected in 1854 by the colonel of the regiment, Colonel Congreve.

During this time the regiment served with distinction in both the Sikh wars with several lodge members, including Congreve, seriously injured.

The regiment served for several years on the sub-continent and was instrumental in forming a number of lodges.

Members of Glittering Star are recorded as visiting various lodges including the Himalayan Brotherhood Lodge 459 (EC) and Astrea Lodge 972 (EC).

The lodge continued to meet until the outbreak of the Great War when, during the conflict, sadly, five officers of the lodge were killed in action. 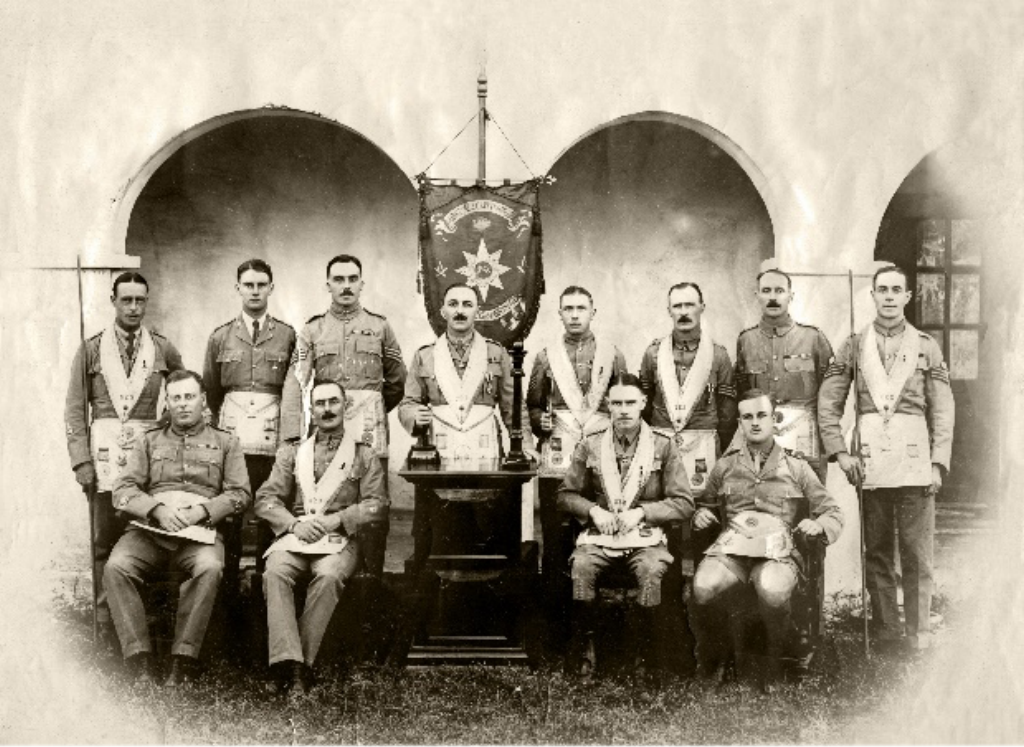 After the Great War the regiment and the lodge found themselves once more in India, and in 1920 lodge activities resumed.

In the late 1930s, the regiment found itself at Aldershot and during this period it was posted for duty at the Tower of London.

At this time Field Marshall Sir Claud Jacob G.C.B., was constable of the tower and colonel of the regiment.

He was also Past Senior Grand Warden of the Grand Lodge of England and an honorary member of Lodge Glittering Star.

During a conversation, the idea was struck to hold a meeting at the Tower of London. After further discussions the meeting was held on 3 June 1938.

Left: Senior NCOs from Worcestershire Regiment at the Tower in 1938
Right; Officer and Guard at the Tower, 1938

It was the first ever recorded Masonic lodge meeting to be held in the confines of the Tower and to commemorate this event a special medal was struck. 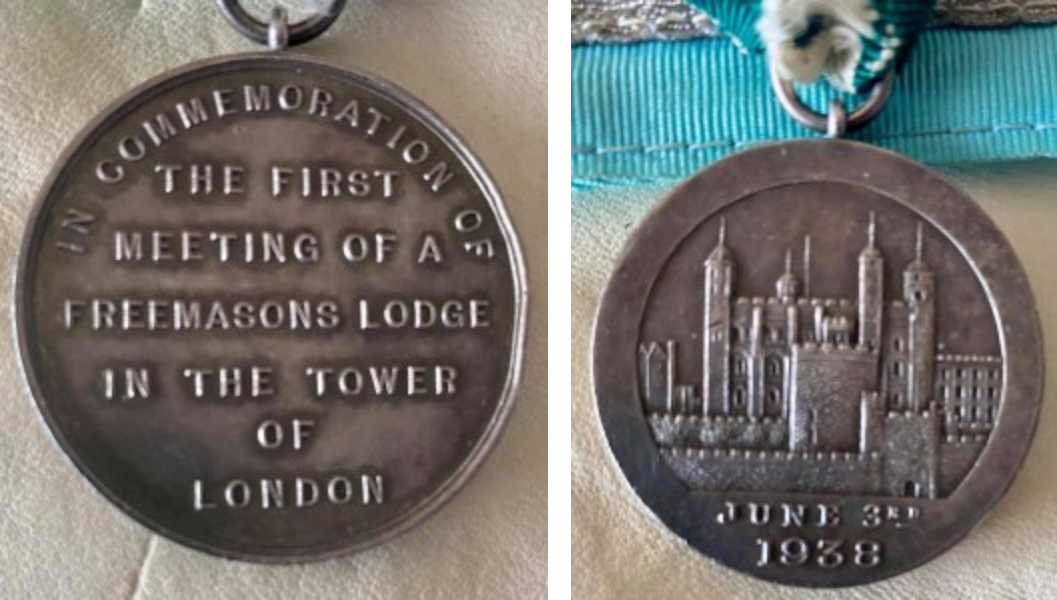 In 1959, the bicentenary of the lodge was celebrated at an installation meeting attended over 350 Brethren.

In the early 1960s, the lodge was with the regiment at Minden, West Germany and during this time were invited by their German Brethren to use their lodge rooms for all meetings.

During its long history, the lodge has travelled to various locations throughout the world and also in latter times within the UK.

​An Historic Meeting of Irish and English Masonry at Freemasons’ Hall, London

In the early part of 2019, it was arranged between lodge co-ordinator Chas Black, and Julian Smith, (secretary of Tetragon Lodge) for Tetragon to host Glittering Star to enable them to initiate the son of one of the lodge members. 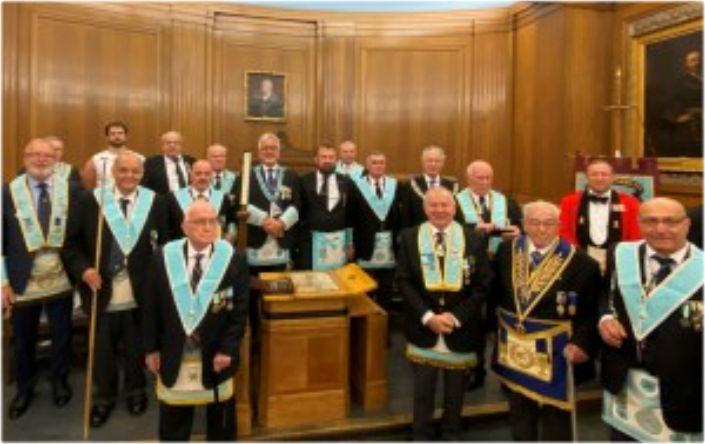 Thus, on Saturday 4 September, Lodge Glittering Star held its meeting within the confines of Freemasons’ Hall, the home of English Masonry.

The day was a great success. Tetragon Lodge opened proceedings at 09:00 with an initiation ceremony before closing their lodge and handing over the reins to Lodge Glittering Star who conducted, with great aplomb, an Irish Initiation ceremony in the presence of over 50 Brethren.

The meeting was followed by a festive board at Browns of Covent Garden, which was greatly enjoyed by those who were present.

The day was concluded by a visit to see the Ceremony of the Keys at the Tower of London, along with some convivial company in the Yeoman Warders bar.

It was noted that this was the first time that a member of Lodge Glittering Star had been in the Tower since the meeting held in 1938. 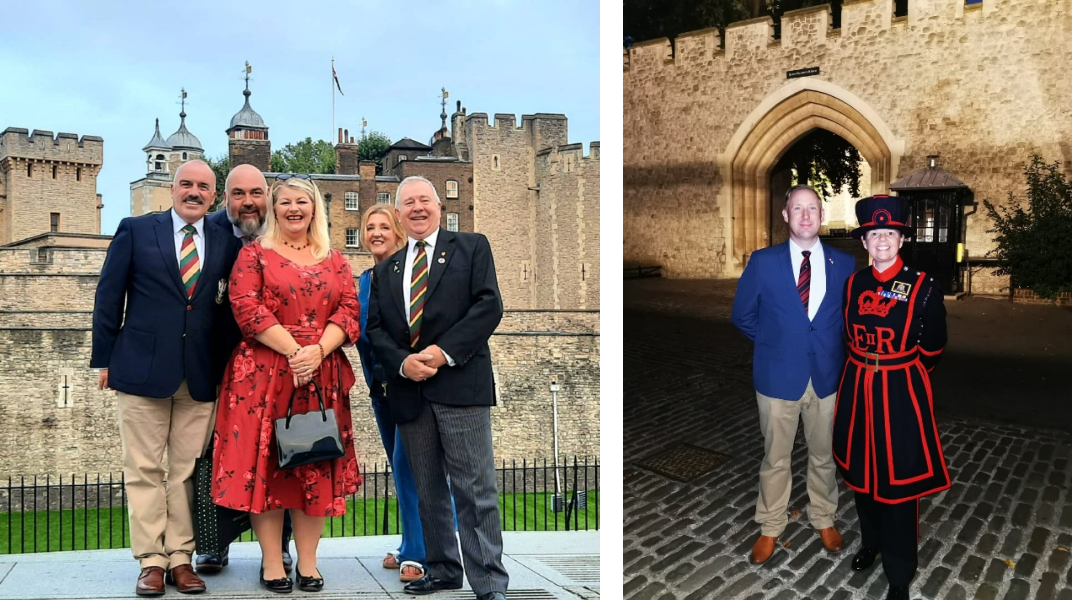 Left: Outside the Tower
Right: Outside Warders Bar

Interestingly, it was pointed out by the Yeoman Warder tour guide that there is a square and compasses inlaid into the path approaching the Beauchamp tower.

There has been some considerable discussion over the origins of this and speculation that maybe, just maybe it was laid by a lodge member during the visit to the tower in 1938.

Obviously, the mystery will never be solved but is a nice thought.

Editor’s Note: we will be exploring the ‘mystery of the stone square and compasses’ in a forthcoming issue!

For more information on this fascinating lodge, visit http://www.glitteringstar.co.uk/

Military Lodges. The Apron and the Sword

This work is in the public domain in the United States of America, and possibly other nations.

Within the United States, you may freely copy and distribute this work, as no entity (individual or corporate) has a copyright on the body of the work.

Scholars believe, and we concur, that this work is important enough to be preserved, reproduced, and made generally available to the public.

To ensure a quality reading experience, this work has been proofread and republished using a format that seamlessly blends the original graphical elements with text in an easy-to-read typeface.

They built some of the first communal structures on the empire’s frontiers. The empire’s most powerful proconsuls sought entrance into their lodges.

Their public rituals drew dense crowds from Montreal to Madras.

In this first study of the relationship between Freemasonry and British imperialism, Harland-Jacobs takes readers on a journey across two centuries and five continents, demonstrating that from the moment it left Britain’s shores, Freemasonry proved central to the building and cohesion of the British Empire.

The organization formally emerged in 1717 as a fraternity identified with the ideals of Enlightenment cosmopolitanism, such as universal brotherhood, sociability, tolerance, and benevolence.

As Freemasonry spread to Europe, the Americas, Asia, Australasia, and Africa, the group’s claims of cosmopolitan brotherhood were put to the test.

Harland-Jacobs examines the brotherhood’s role in diverse colonial settings and the impact of the empire on the brotherhood; in the process, she addresses issues of globalization, supranational identities, imperial power, fraternalism, and masculinity.

By tracking an important, identifiable institution across the wide chronological and geographical expanse of the British Empire, Builders of Empire makes a significant contribution to transnational history as well as the history of the Freemasons and imperial Britain.

Schism: The Battle That Forged Freemasonry

Schism examines the creation of the Antients Grand Lodge and traces the influence of Ireland and the London Irish – especially that of Laurence Dermott, the Antients’ Grand Secretary – in the development of freemasonry in the second half of the 18th century.

It contrasts the relative accessibility of the Antients with the exclusivity of the ‘Moderns’ – the original Grand Lodge of England – and outlines how the dispute instigated a half century of  rivalry with the Moderns that resulted in fundamental changes to the composition and nature of freemasonry, extending formal sociability to the lower middling and working classes and creating one of the first modern friendly societies.

Schism makes the subject accessible to both a Masonic and non-Masonic audience and supplements dated historical works.

The book contributes to the history of London and the London Irish in the long 18th century and examines the social and trade networks of the urban lower middling and working class, areas that remain substantially unexplored.

It also offers a prism through which Britain’s calamitous relationship with Ireland can be examined. 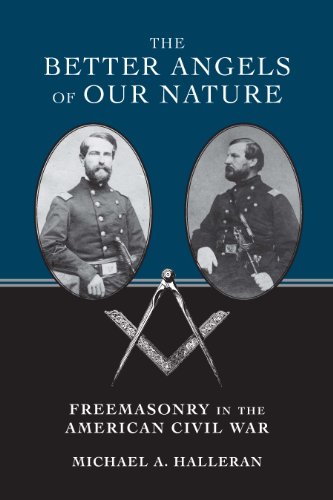 The Better Angels of Our Nature: Freemasonry in the American Civil War

By: Michael A. Halleran (Author)

One of the enduring yet little examined themes in Civil War lore is the widespread belief that on the field of battle and afterward, members of Masonic lodges would give aid and comfort to wounded or captured enemy Masons, often at great personal sacrifice and danger.

This work is a deeply researched examination of the recorded, practical effects of Freemasonry among Civil War participants on both sides.

From first-person accounts culled from regimental histories, diaries, and letters, Michael A. Halleran has constructed an overview of 19th-century American freemasonry in general and Masonry in the armies of both North and South in particular, and provided telling examples of how Masonic brotherhood worked in practice.

Halleran details the response of the fraternity to the crisis of secession and war, and examines acts of assistance to enemies on the battlefield and in POW camps.

The author examines carefully the major Masonic stories from the Civil War, in particular the myth that Confederate Lewis A. Armistead made the Masonic sign of distress as he lay dying at the high-water mark of Pickett’s charge at Gettysburg.