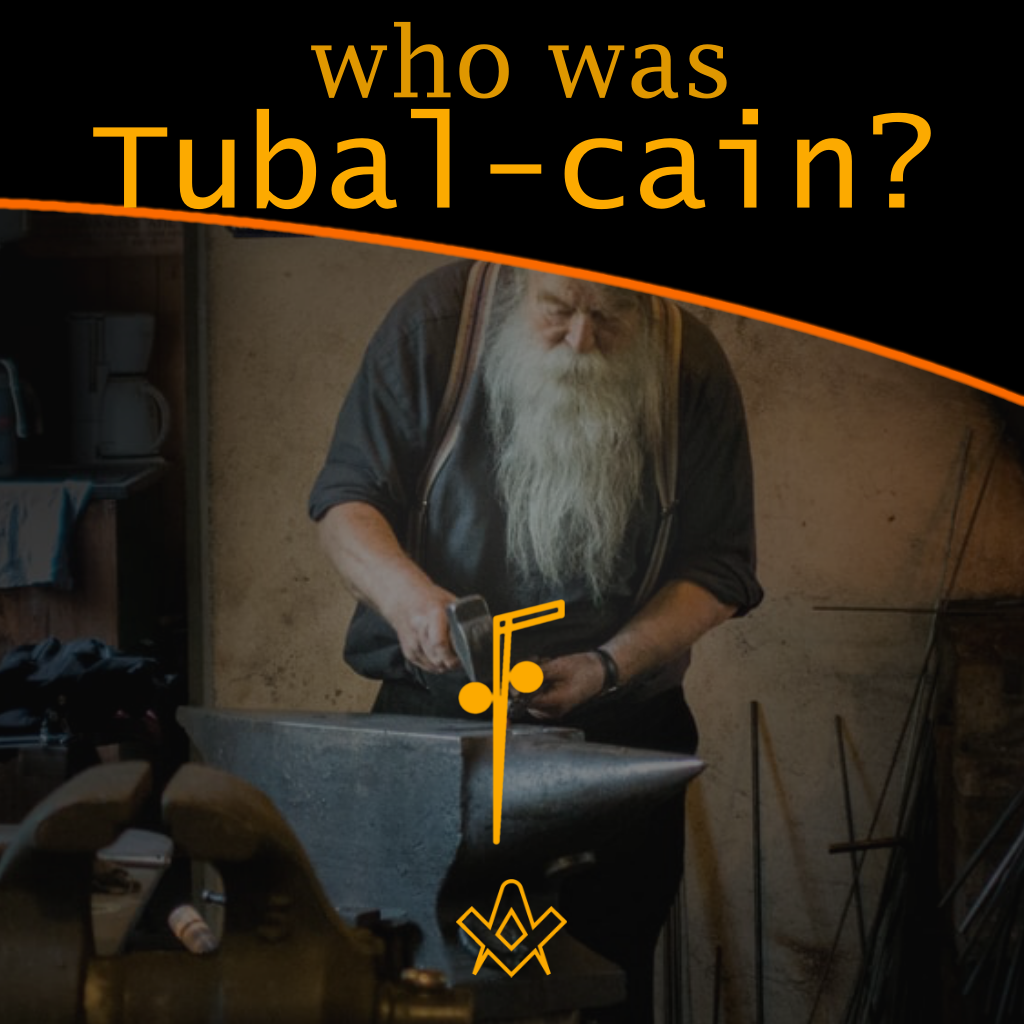 Tubal-cain is a biblical figure; a smith, and master of metallurgy. He is a descendent of Cain, the son of Lamech and Zillah, and his three siblings are:

Jabel – in the Bible he is described as a shepherd, but according to the Cooke Manuscript he was reputed to have discovered geometry and became Cain’s Master Mason.

Jubal – the forefather of musicians, he is described as “the father of all those who play the harp and flute”.

Naamah – she is attributed to be a teacher of reading, and/or the inventor of weaving.

Tubal-cain was the father of people who work with bronze and iron.

Flavius Josephus, in his book Antiquities of the Jews stated that Tubal-cain “exceeded all men in strength, and was very expert and famous in martial performances”.

Tubal-cain and his family make their first Masonic-related appearance in the Matthew Cooke Manuscript (c.1450) the second oldest of the Masonic ‘Old Charges’, which recants the legend of the construction of two pillars, by the four children of Lamech i.e. Jabel, Jubel, Tubal, and Naamah.

Fearing the destruction of the world by fire or water, the siblings decided to inscribe all the sciences they had founded onto these pillars, one made of marble, which would not burn, and the other from clay-brick, which would not sink.

Ye shall understand
that this son Tubal Cain
was [the] founder of smiths’
craft, and of other crafts of
metal, that is to say, of iron,
of brass, of gold, and of silver,
as some doctors say, and his
sister Naamah was finder of
weavers-craft… 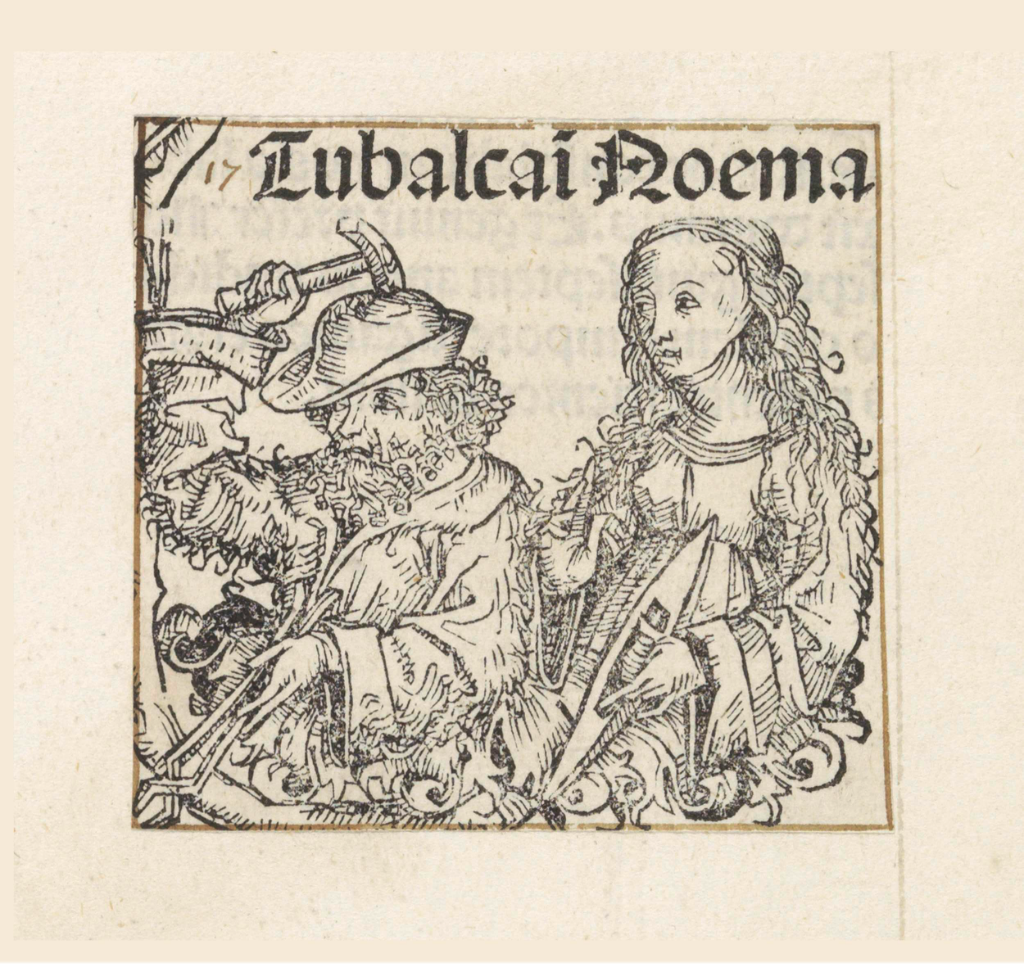 …They took their counsel
together and, by all their witts,
they said that [there] were 2 manner of
stone[s] of such virtue that the one
would never burn, and that stone
is called marble, and that the other stone
that will not sink in water and
that stone is named latres, and
so they devised to write all
the sciences that they had found in
these 2 stones, [so that] if that God would
take vengeance, by fire, that the
marble should not burn.
And if God sent vengeance,
by water, that the other should not
Drown…

Importantly, James Anderson had access to the Cooke manuscript when he produced his 1723 Constitutions.

He quotes the final sixty lines in a footnote to his description of the York assembly.

The Woodford manuscript, which is a copy of the Cooke, has a note explaining that it was made in 1728 by the Grand Secretary of the Premier Grand Lodge of England, William Reid, for William Cowper, Clerk of the Parliaments, who had also been Grand Secretary. [2]

[1] Translation of the Matthew Cooke MS from https://freemasonry.bcy.ca/texts/cooke.html

The following is an excerpt from Harry Carr’s The Freemason at Work which gives us a concise answer as to why Tubal-cain is prominent in Masonic ritual:

Q. Why does Tubal-cain, an artificer in metals, play such a prominent part in our ritual? Why was not a builder chosen—or at least someone connected with the art of building?

A. For a full answer to this question, we have to go back to the oldest documents of the Craft, the MS. Constitutions, but first we should glance at the Biblical background to the story, which appears in Gen. 4, vv. 16-22.

The Bible tells how Cain, having murdered his brother, escaped from Eden to Nod where his wife bore him a son, Enoch.

Cain then built, or started to build, a city and knowing himself to be accursed, he named it after his son Enoch.

The succeeding verses then recount the birth of Enoch’s grandson, Lamech, with the story of Lamech’s two wives, and their four children:

Jabal, the father, or the originator, of the science of tending flocks. (Abel had been a shepherd, but Jabal had widened the class of animals that could be domesticated.)

Jubal, founder of the art of music.

Tubal-cain, inventor of the forge, skilled in brass and ironwork and in cutting instruments.

Naamah. The O.T. [Old Testament] text simply names her as Lamech’s daughter. But a Jewish tradition arose, and was well established among historians in the Middle Ages, that she was the inventor of the arts of weaving and other related skills.

So much for the background, amplified slightly with notes from the early commentaries.

The story, in so far as it concerns our present ritual, is derived from the earliest pillar legend incorporated in the historical portion of the MS. Constitutions, our Old Charges.

It tells how the four children of Lamech, fearing that the world was to be destroyed by fire or flood, ‘took counsel together’ and decided to inscribe ‘all the sciences’ that they had founded, upon two pillars, one of marble and the other of lacerus’ (clay-brick), because the one would not burn and the other would not sink in water.

There is no need to discuss the ‘accuracy’ of the legend. Josephus gave one version of it in his Antiquities, and the story reappears in the writings of many of the medieval historians.

The earliest ‘Masonic’ version appears in the Cooke MS. of c. 1410, where the compiler had clearly attempted to reconcile several conflicting accounts, but the Cooke MS. legend was repeated regularly (with variations) in all subsequent versions of the MS. Constitutions.

These two pillars, not Solomon’s, were the earliest pillars in the legendary history of the Craft and our story then goes on to recount how the world was saved in Noah’s flood and how the science of masonry traveled from the east through Egypt into Europe and was finally established in England.

Why was not a builder chosen? Doubtless because the first builder of a city, according to the O.T., was Cain, a murderer.

Why Tubal-cain? I would say, because he was the forerunner of Hiram Abiff; indeed the Old Testament (Gen. 4, v. 22, and I Kings 7, v. 14) uses precisely the same two Hebrew words in describing their craft, (choreish nechosheth) ‘a worker in brass’.

Tubal-cain was the founder of the craft in which Hiram Abiff, above all, excelled and he was the direct link between the two earliest pillars and those of Solomon’s Temple.

Although the name Tubal-cain appears regularly in all our Old Charges, it should be noted that the name did not come into our ritual until a comparatively late date, c. 1745; there is no printed evidence of that name in the Masonic ritual earlier than 1745, but recently discovered transcripts of evidence given to the Portuguese Inquisition authorities suggest that the name was in use in a Lodge of Irishmen at Lisbon as early as 1738. (AQC 84, p.93)

The Freemason At Work

In a style that became a hall mark of all his masonic writing, he always answered a little more than the original question.

Only the best and most interesting subjects are included and every question will be relevant to most brethren in the course of their work in the lodge ? hence the title The Freemason at Work

This book was substantially revised by Frederick Smyth, the eminent Masonic author and Past Master of Quatuor Coronati Lodge, in 1992; brining the text right up-to-date for much had change since the book was first published in 1976.

This is a book to be treasured, one that will provide a wealth of knowledge in an easy to read style.

A collection of more than 200 questions with comprehensive answers to all manner of masonic subjects.