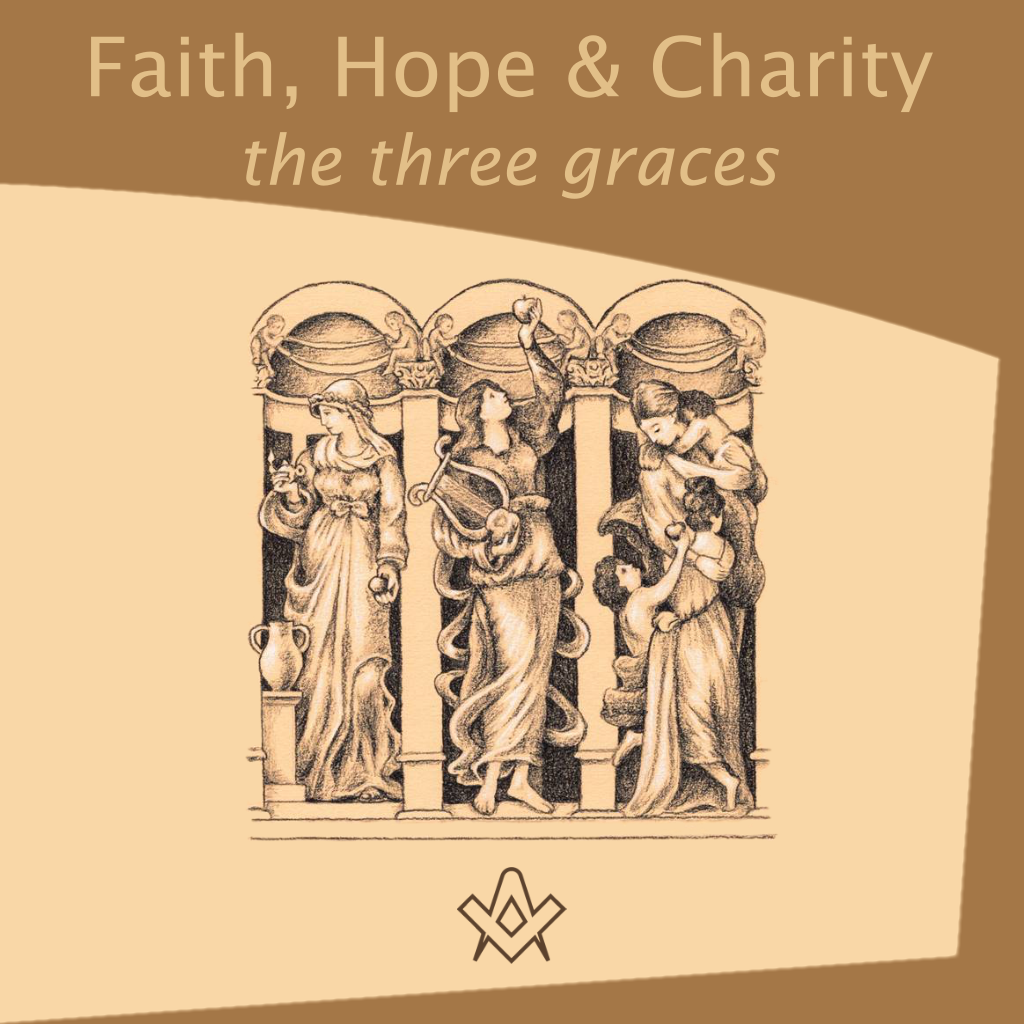 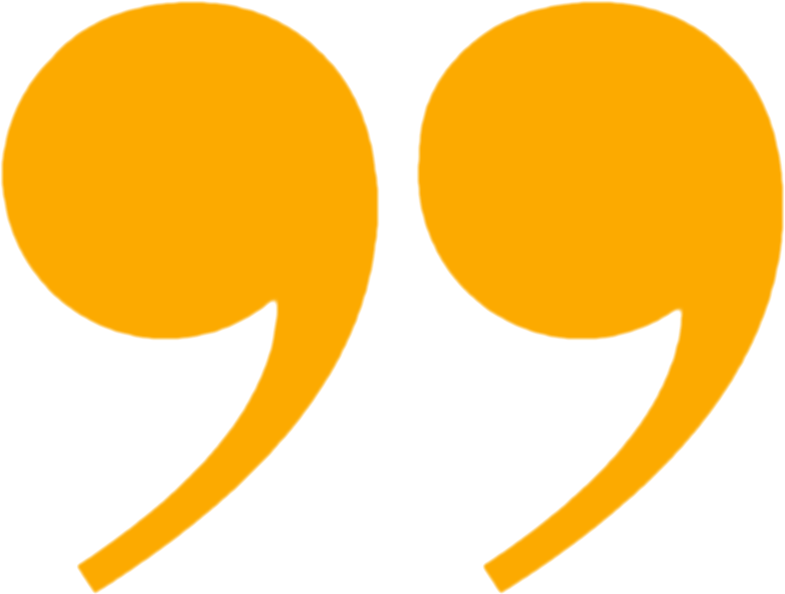 And now abideth faith, hope, charity, these three; but the greatest of these is charity 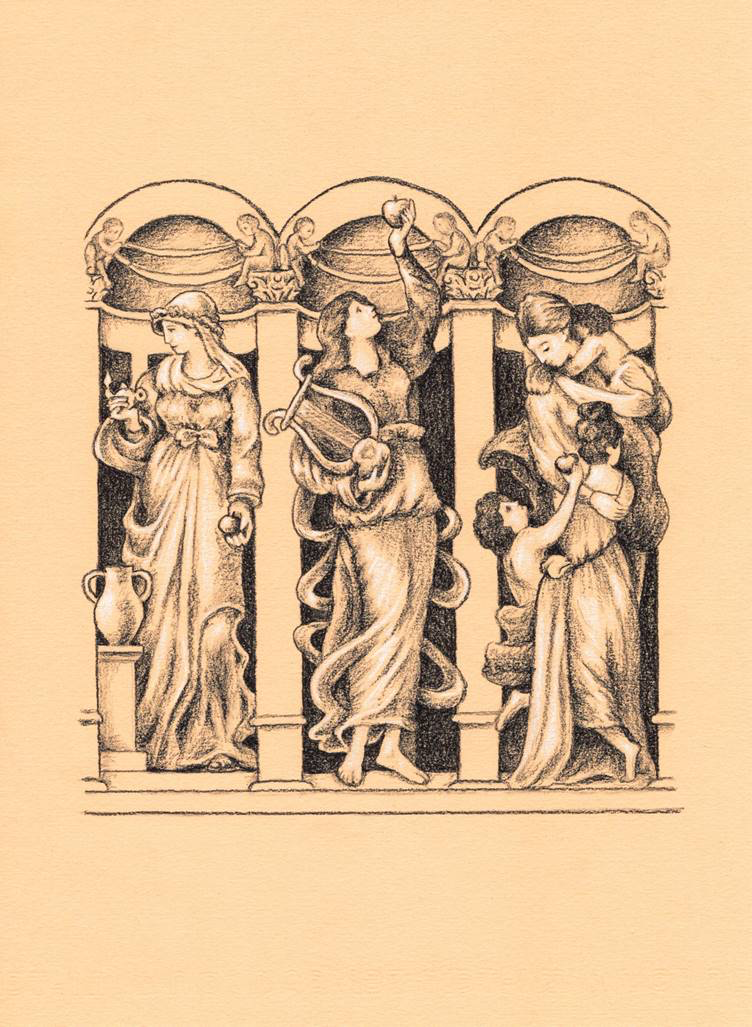 Exploring the origin and symbolism of Faith, Hope and Charity – the image by artist and Freemason Travis Simpkins, depicts these virtues as ‘The Three Graces’.

We tend to view the three ‘graces’ or ‘virtues’ as those in Christian theology but they are not written in theological stone, for in Freemasonry, faith, hope and charity are encountered in the very first ritual that one experiences – Initiation.

It is in the First Degree that the candidate first comes across the concepts of Faith, Hope and Charity.

He is asked to name the covering of a Freemason’s lodge; of which the correct answer is that of a Celestial Canopy of diverse colours, even the Heavens.

He is then asked how, as Masons, they can hope to figuratively enter the canopy of heaven.

He then replies that is will be by the assistance of a Ladder, which in Scripture is that of Jacob’s Ladder. 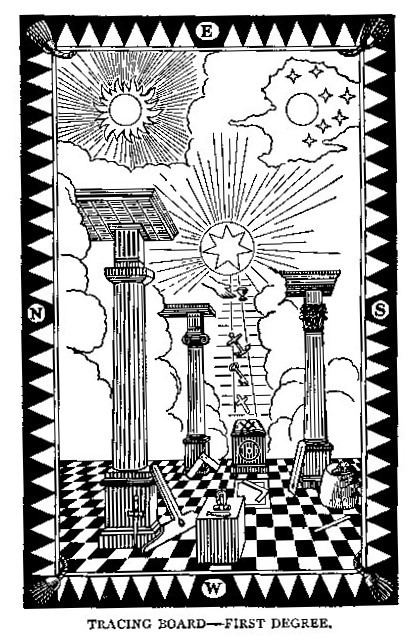 Exploring the origin and symbolism of Faith, Hope and Charity – the image by artist and Freemason Travis Simpkins, depicts these virtues as ‘The Three Graces’.

[Jacob] lay down to rest, taking the Earth for his bed, a stone for his pillow, and the Canopy of Heaven for a covering. He there in a vision saw a Ladder, the top of which reached to the Heavens, and the Angels of the Lord ascending and descending thereon.

Q -Of how many staves or rounds was this Ladder composed?

A – Of many staves or rounds, which point out as many moral virtues, but three principal ones, which are, FAITH, HOPE, and CHARITY.

A – Faith in the Great Architect of the Universe; Hope in Salvation; and to be in Charity with all men. 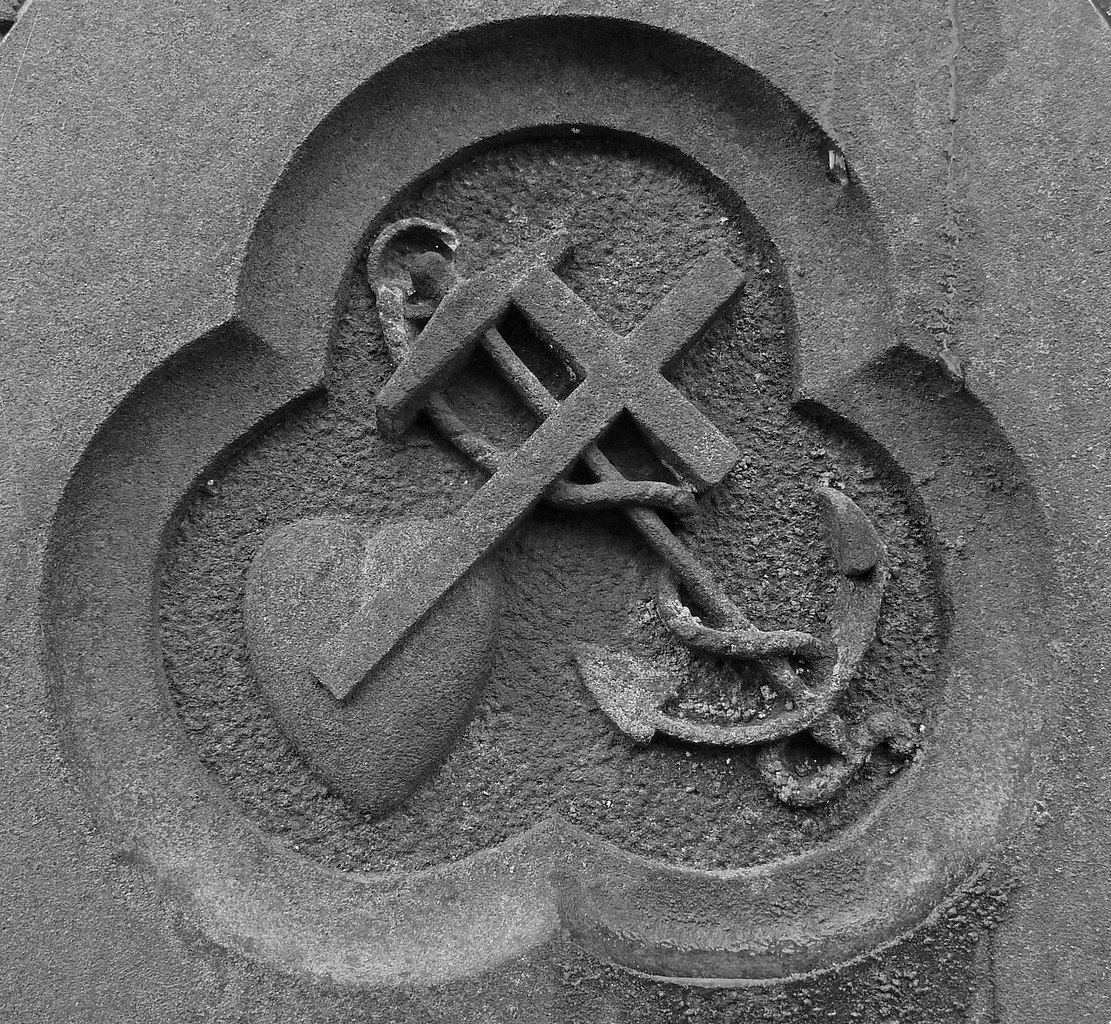 So what is this teaching for? To instil the desire to become a better man; to utilise these three Principal Moral Virtues for the greater good of mankind and one’s fellow man.

The definitions of the term ‘moral’ are all to be found deeply ingrained within the teachings of Freemasonry regardless of faith or creed: concerned with the principles of right and wrong behaviour; holding or manifesting high principles for proper conduct; a lesson that can be derived from a story or experience (Oxford English Dictionary).

Morality is the foundation of society and the cornerstone of personal development; something that the teaching of Freemasonry readily embodies and endeavours to impart to its members.

To be sure, the candidate hears and takes this advice on board but does he understand? Repeated exposure to the First Degree will no doubt reinforce this lesson but it is something that needs to be taken to heart and put into practice.

Religion or creed is no barrier to Freemasonry and even though the majority of teachings in Masonic rituals are illustrated by examples from a Christian theology, it does not take great strides to be able to translate these wise words into the language of whatever faith one has. 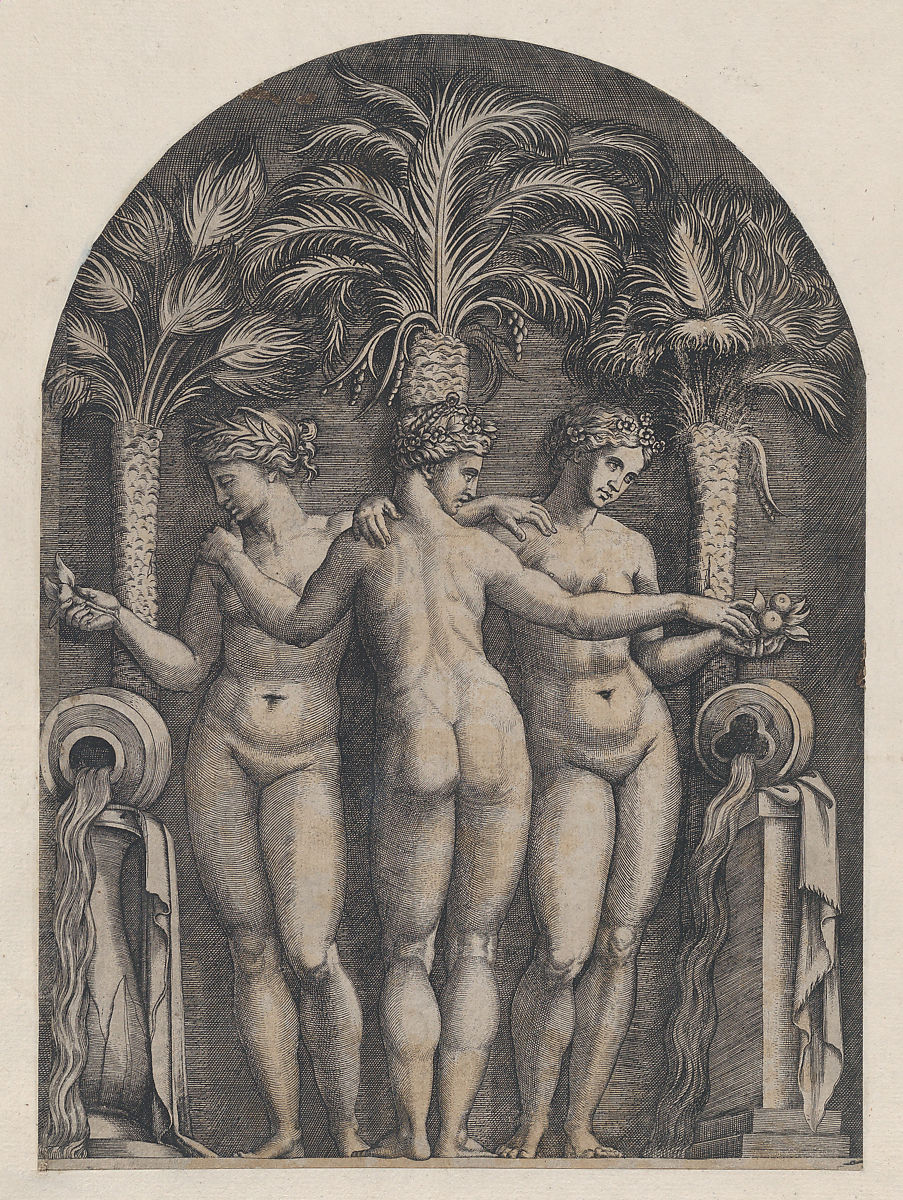 Why the depiction of the Charites or Graces?

In Greek mythology, the Charites (kharites) or Graces were primarily goddesses of beauty, nature, human creativity and fertility – the most prominent being Aglaea (representing Splendour), Thalia (Good Cheer), and Euphrosyne (Mirth) and they were believed to personify and bestow charm, grace, and beauty.

The Charites were usually considered the daughters of Zeus and Eurynome, but variations abound and they were also said to be daughters of Dionysus and Aphrodite or Helios and the nymph Aegle.

The Charites also held an association with the Greek underworld and the Eleusinian Mysteries. In Roman mythology they were known as the Gratiae, the ‘Graces’.

‘Grace’ can be defined in several ways, of which some are found within Masonic catechism and education:

Depictions of the graces have been found throughout the centuries.

Within Freemasonry Faith, Hope, and Charity have also been depicted as three women: the frontispiece to Albert Mackey’s Encyclopedia of Freemasonry and its Kindred Sciences; the New and Revised Edition, Vol I (Mackey, A, Hughan, W, Hawkins, L, 1927) features a stunning illustration:

Faith is shown standing between two Corinthian Pillars holding a lamp in her hand, which symbolises the ‘lamp of knowledge’

Hope stands before a window, flowers in her arms and new growth springs at her feet.

Charity, with the clouded canopy of heaven behind her, holds a small child in one arm and two older children cling to her.

This combined with the imagery and symbolism of Jacob’s Ladder offers a striking aide memoir for the Three Moral Virtues.

So how can we define and understand Faith, Hope and Charity in relationship to Freemasonry?

Naturally one thinks of the connection to the Bible and that is rightly so in some aspects due to the nature of the times in which modern Freemasonry was conceived and founded.

However, the three concepts are equally as important regardless of the religious or spiritual path the individual follows and can be put into practice in everyday life – within and without lodge.

In the First Degree the Candidate is asked ‘to define FAITH’.

The answer is that ‘it is the foundation of justice, the bond of amity, and the chief support of civil society. We live and walk by Faith. By it we have a continual acknowledgment of a Supreme Being’.

The dictionary definition(s) of ‘faith’: Complete trust or confidence in someone or something

The definition fits perfectly with one of the requirements for membership of Freemasonry – the belief (or faith) in a Supreme Being that is associated with your religious or philosophical path. The beauty of Freemasonry is the inclusion of all faiths; whether you are Christian, Jewish, Muslim, Sikh, Hindu, Shinto, Buddhist, Zoroastrian and so on.

Faith is also needed with regards to relationships and bonds with your fellow Brethren, your lodge and Freemasonry as an organisation. You feel the bond of amity and have faith that the ancient landmarks and obligations will be followed so as to create a harmonious and long-lived lodge.

In the ritual the answer is that, Hope is an anchor of the soul, both sure and steadfast.

Hope is the belief or faith that we shall succeed; that things will turn out for the best; ‘hope’ meaning that we have a ‘feeling of expectation and desire for a particular thing to happen’ (OED)

So ‘faith’ and ‘hope’ are symbiotically intertwined – the EA is admonished to let a firm reliance on the Almighty’s faithfulness animate our endeavours but so the expectation and desire for something is not just wishful thinking, he must make efforts to fix our desires within the limits of His most blessed promises and then success will follow…if we believe a thing impossible, our despondency may render it so, but he who perseveres in a just cause will ultimately overcome all difficulties.

In religious or spiritual terms, we aspire – or hope – that we will achieve Salvation and enter the ‘Canopy of Heaven’/the hereafter/Elysium etc., at the end of our life; so we attempt to build our metaphorical ladder to the Promised Land.

In daily life, hardships, fears and frustrations are abundant; we often encounter obstacles that make life difficult; people we don’t like or those who make us feel inferior but as long as we have faith in ourselves – and our God/Supreme Being –and hope to anchor us to the right path and the way to walk it, we will succeed. Freemasonry offers the tools for all these things.

Charity, as Paul says in 1 Corinthians 13, is the greatest of all the three virtues (the interchangeable term for charity is ‘love’ in Scripture).

Though I speak with the tongues of men and of angels, and have not charity, I am become as sounding brass, or a tinkling cymbal.

And though I have the gift of prophecy, and understand all mysteries, and all knowledge; and though I have all faith, so that I could remove mountains, and have not charity, I am nothing.

And though I bestow all my goods to feed the poor, and though I give my body to be burned, and have not charity, it profiteth me nothing.

And now abideth faith, hope, charity, these three; but the greatest of these is charity.

The Latin for ‘charity’ Caritas was defined by Thomas Aquinas as ‘the friendship of man for God’ and vice versa but also extends it to ‘the love of our neighbour’.

It is a reciprocal friendship and one in that the giver of charity/love sees and imitates the love of God between himself, and his fellow man.

This kind of love was known by the Greeks as agape – ‘the love of God for man and of man for God’.

Other faiths and religions have similar or related concepts: 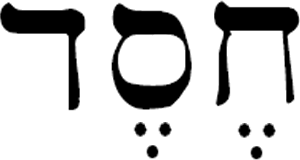 Chesed – a Hebrew word commonly translated as ‘loving-kindness’, ‘kindness’ or ‘love’ and is central to Jewish ethics and theology.

It is a common term in the Bible for describing God’s love for mankind and God’s special relationship with the Children of Israel and is considered a virtue on its own, and also for its contribution to tikkun olam (repairing the world).

Mettā (Pali) translates variably as benevolence, loving-kindness, amity, or good will and active interest in others.

It is the first of the four virtues (Brahmavihāras) of the Theravāda school of Buddhism. 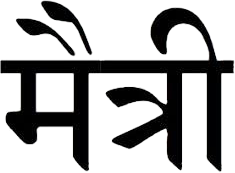 Maitrī (Sanskrit) is a term used in Jainism to reflect loving kindness to all living things.

The First Degree ritual describes it as:

Lovely in itself, is the brightest ornament which can adorn our Masonic profession…Happy is the man who has, sown in his breast, the seeds of benevolence; he envies not his neighbour, he believes not a tale reported to his prejudice, he forgives the injuries of men, and endeavours to blot them from his recollection…

The fruits of charity are joy, peace, and mercy; charity demands beneficence and fraternal correction; it is benevolence; it fosters reciprocity and remains disinterested and generous; it is friendship and communion. 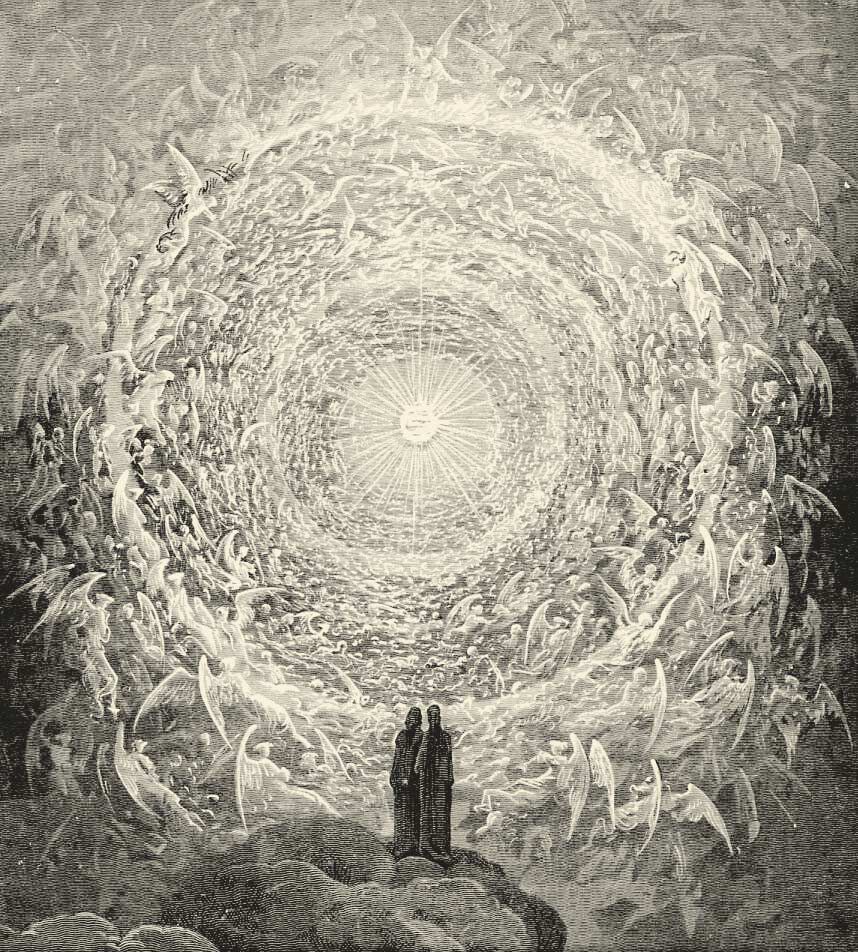 Rosa Celeste: Dante and Beatrice gaze upon the highest Heaven, The Empyrean

‘Amongst the values of Freemasonry are integrity, kindness and fairness. Caring for the community and raising money for charitable causes is important to us.’

Over the years, the he meaning of charity has shifted from the love of humankind, to that of the ‘voluntary giving of help, typically in the form of money, to those in need’ (OED)

All Freemasons are encouraged not only to practice charity in its cerebral or spiritual sense but also to engage in a practical one.

This is symbolically demonstrated and experienced in the First Degree and one indelibly charged lesson most Masons never forget!

One aspect of that experience is to demonstrate that you were admitted into Freemasonry in a state of poverty and to remind you to be mindful of the duty to help impoverished Brethren or others as far as you are able to but not to the detriment to yourself or close family.

Many Masons are understandably very proud of the charitable work they contribute to; charitable giving – in money or voluntarily given time and skills – is a fundamental part of the organisation.

With nearly three centuries of charitable giving behind them, these former charities now have the perfect vehicle to provide help and support to Freemasons, their families and the wider community for the next three hundred years.

charity is love, not all love is charity 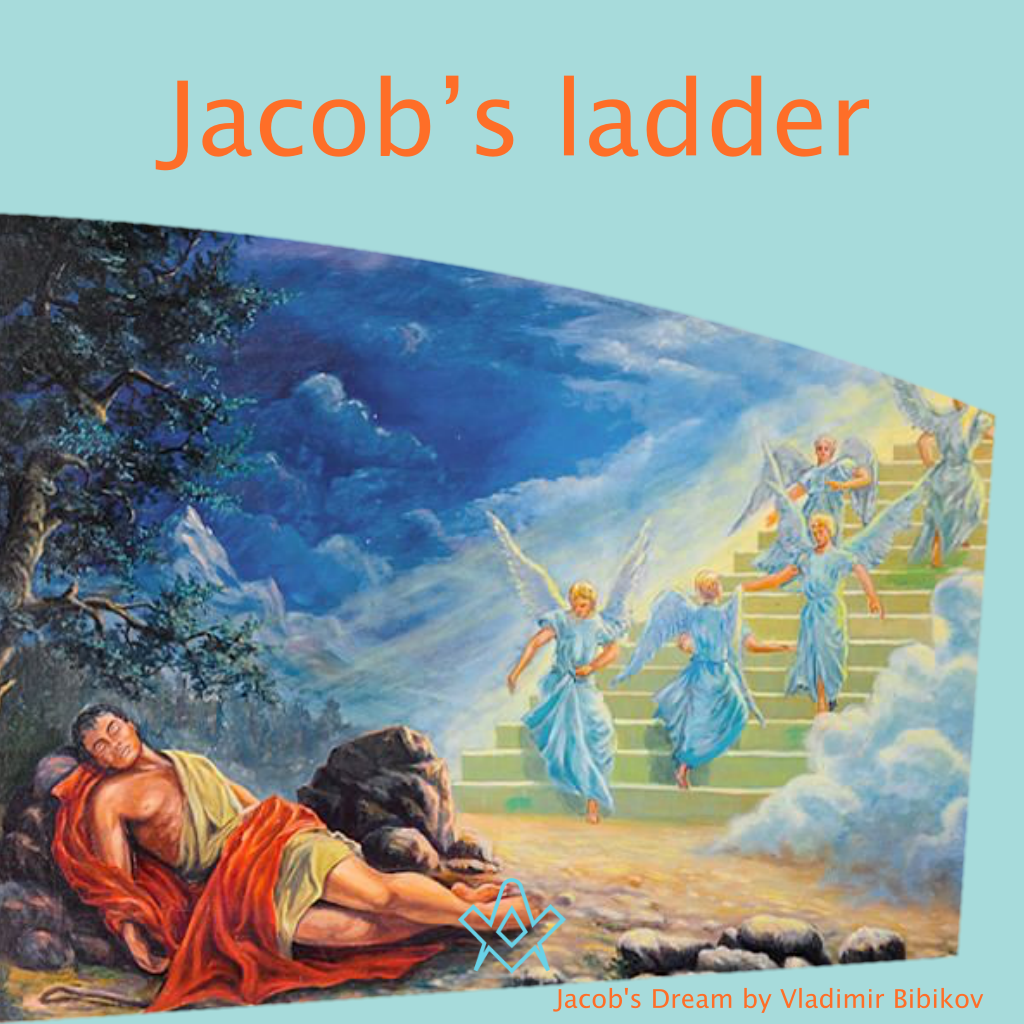 In Masonic rituals, Jacob’s ladder is understood as a stairway, a passage from this world to the Heavens.  …read more 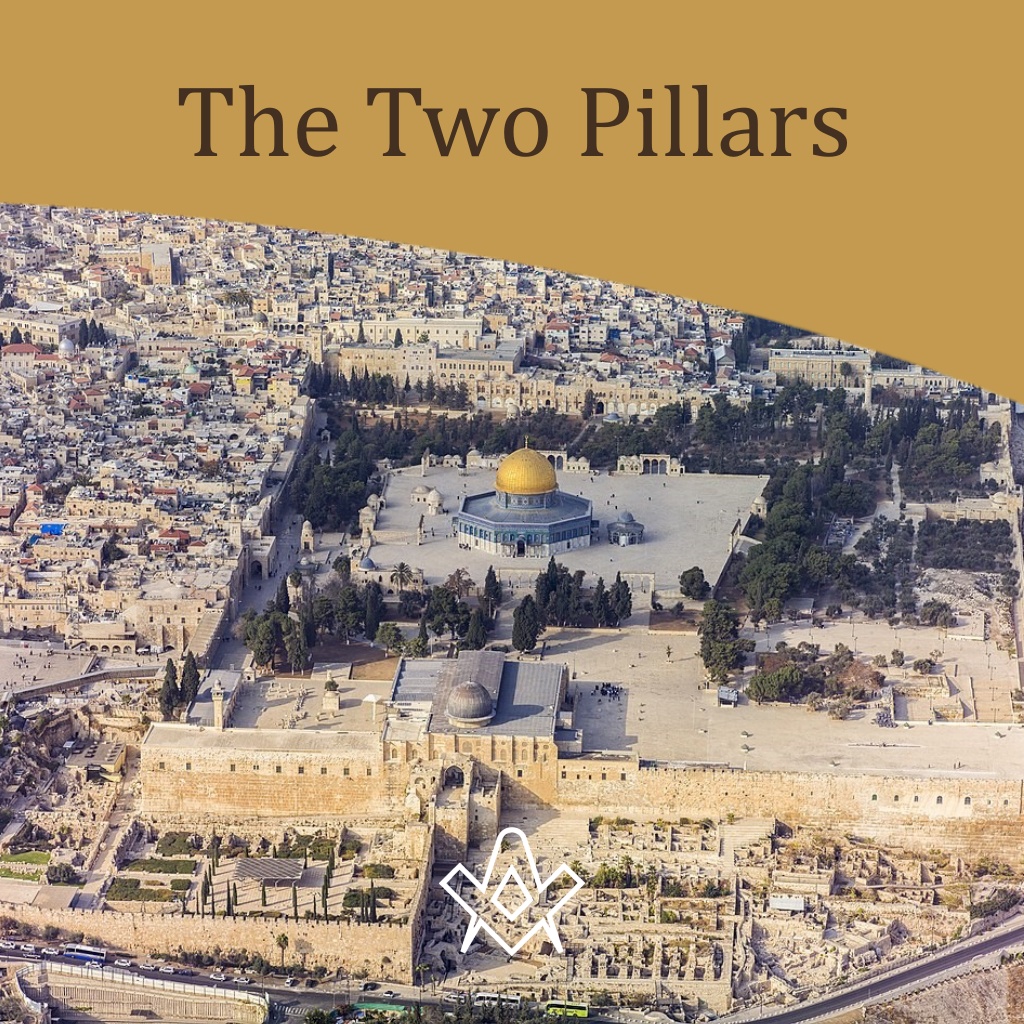 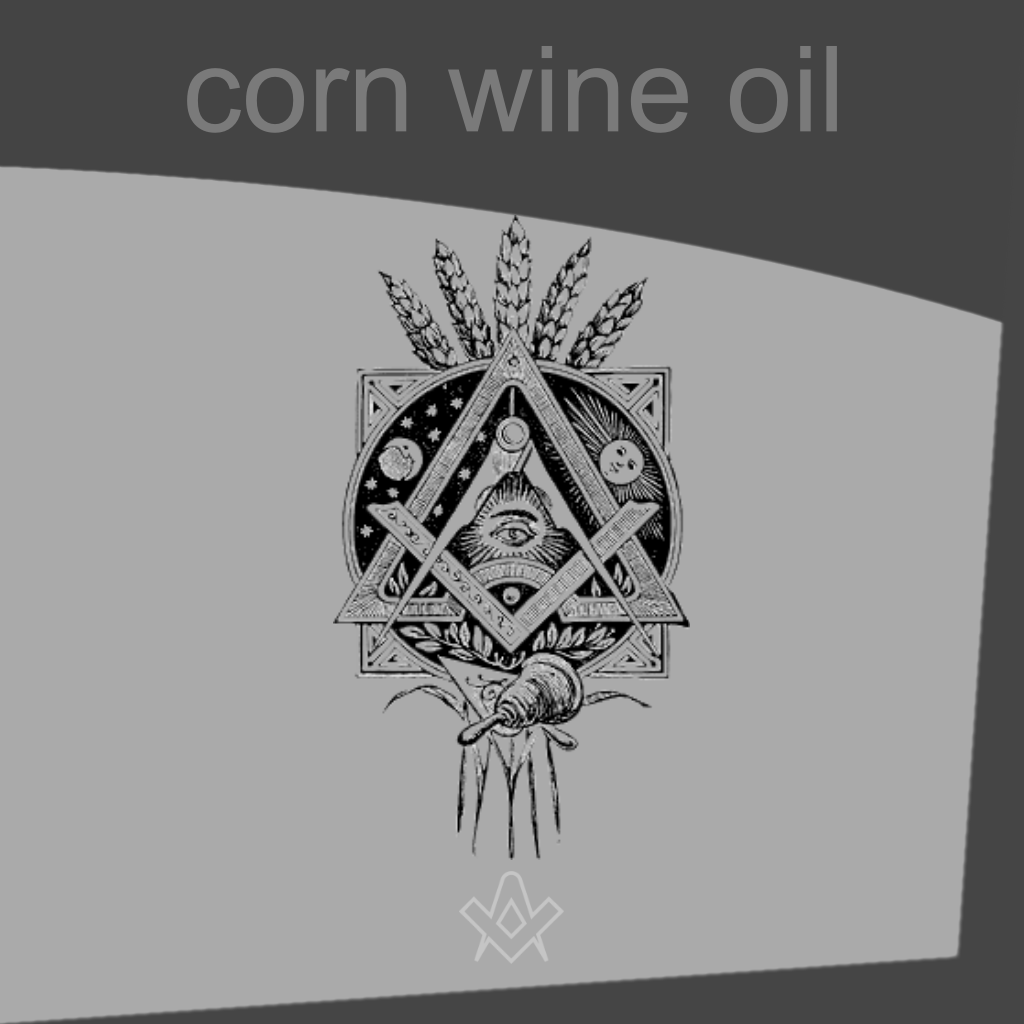 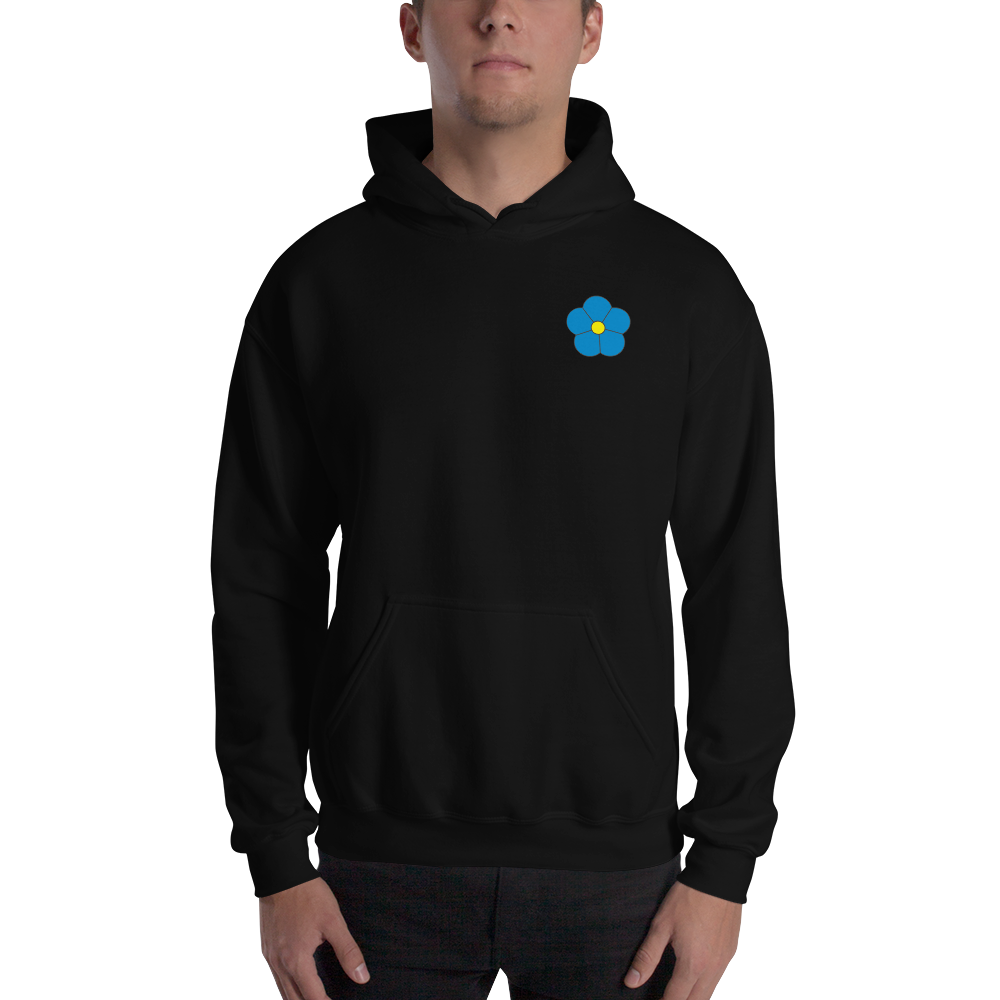