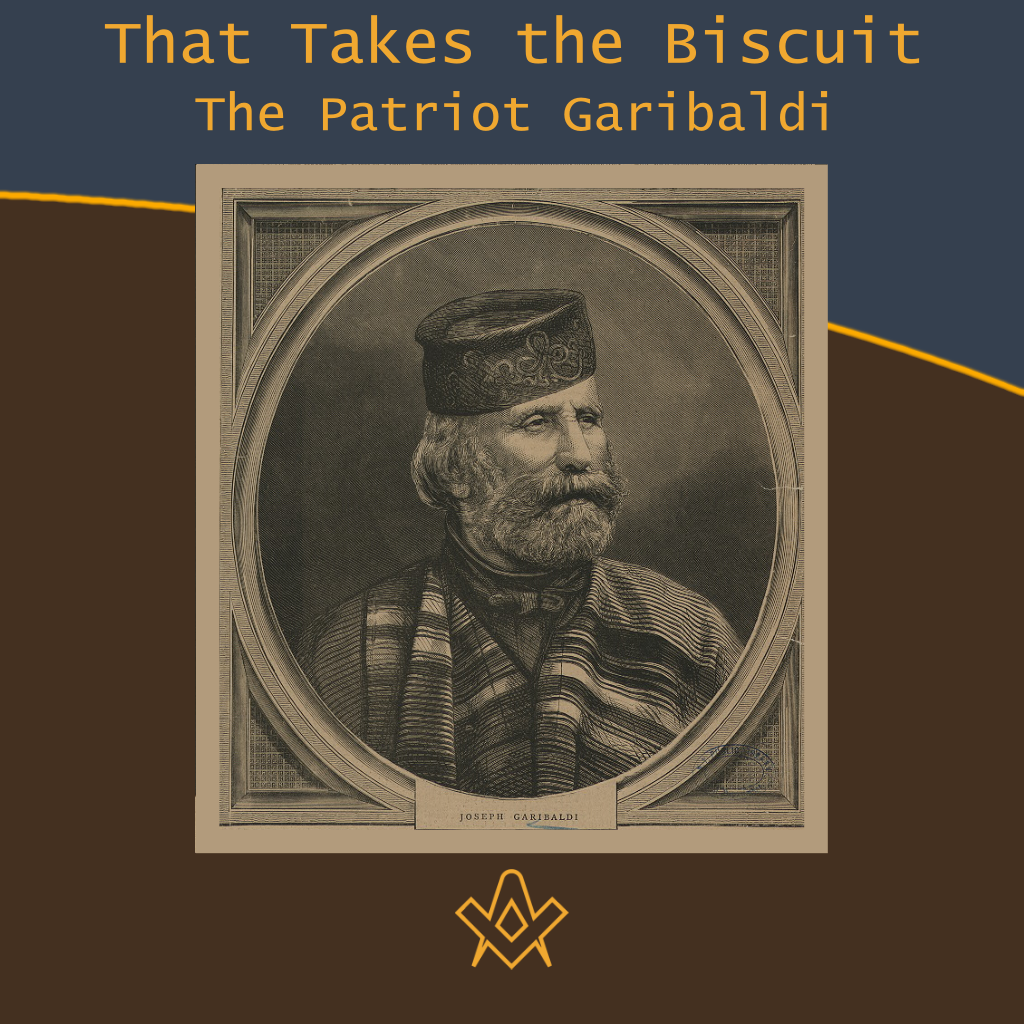 In April 1864, Garibaldi, the Italian Patriot visited Britain and was ‘Royally’ greeted by the Prince of Wales and members of parliament.

He also had meetings with exiled revolutionaries based in London and with ordinary working men.

He planted trees, signed visitors books, received gifts and was awarded honorary memberships. He also visited Bedford’s Iron Works, no doubt to secure supplies for his cause (the signed visitors’ book being in the ‘Higgins’ museum).

His ‘celebrity’ was marked with memorabilia and later, the famous ‘Garibaldi’ biscuit. 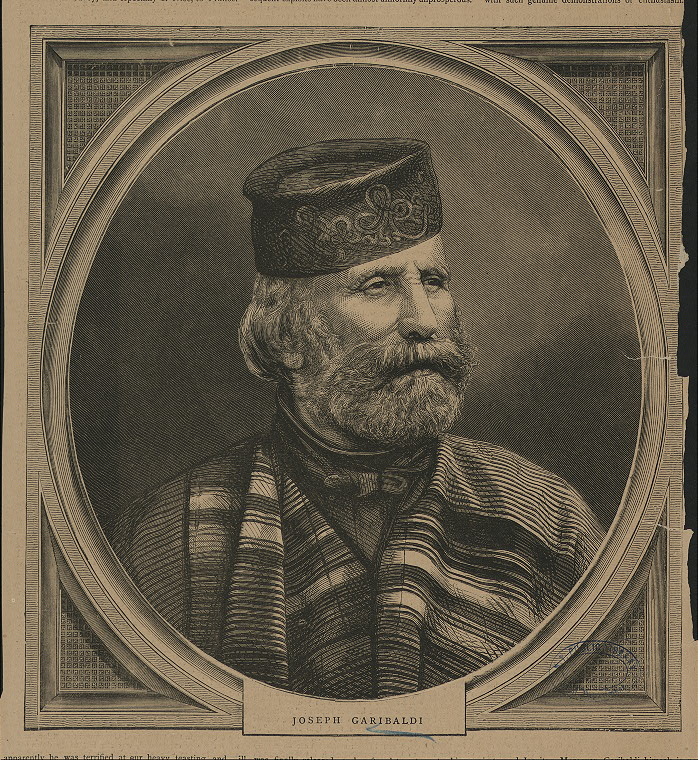 Giuseppe Garibaldi (July 4, 1807–June 2, 1882) was an Italian general and politician who played a large role in the history of Italy and the world.

A central figure in the Italian Risorgimento, since he personally commanded and fought in many military campaigns that led eventually to the formation of a unified Italy.

He has been called the “Hero of Two Worlds” because of his military enterprises in Brazil, Uruguay and Europe.

These earned him a considerable reputation in Italy and abroad, aided by exceptional international media coverage at the time.

Many of the greatest intellectuals of his time, such as Victor Hugo, Alexandre Dumas, and George Sand showered him with admiration.

The United Kingdom and the United States helped him a great deal, offering him financial and military support in difficult circumstances.

In the popular telling of his story, he is associated with the red shirts worn by his volunteers in lieu of a uniform. 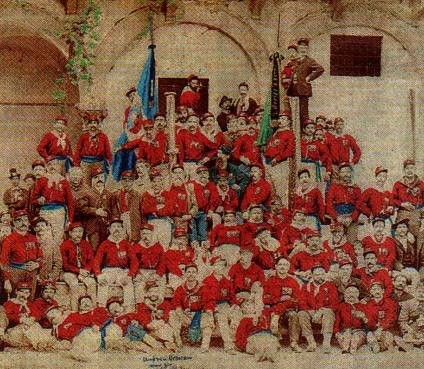 Redshirt volunteers from Brescia during the Expedition of the Thousand (1860) – By Nino Bixio(Life time: 1821-1873) – Original publication: PostcardImmediate source: I Mille, Public Domain

Garibaldi returned to Italy during the revolutions of 1848, and offered his services to Charles Albert of Sardinia.

The monarch displayed some liberal inclinations, but treated Garibaldi with coolness and distrust.

Rebuffed by the Piedmontese, he and his followers crossed into Lombardy where they offered assistance to the provisional government of Milan, which had rebelled against the Austrian occupation.

In the course of the following unsuccessful First Italian War of Independence, he led his legion to two minor victories at Luino and Morazzone.

After the crushing Piedmontese defeat at Novara (23 March 1849), Garibaldi moved to Rome to support the Republic recently proclaimed in the Papal States, but a French force sent by Louis Napoleon (the future Napoleon III) threatened to topple it.

At Mazzini’s urging, Garibaldi took command of the defence of Rome.

In fighting near Velletri,  Achille Cantoni saved his life. After Cantoni’s death, during the Battle of Mentana, Garibaldi wrote the novel Cantoni il volontario. 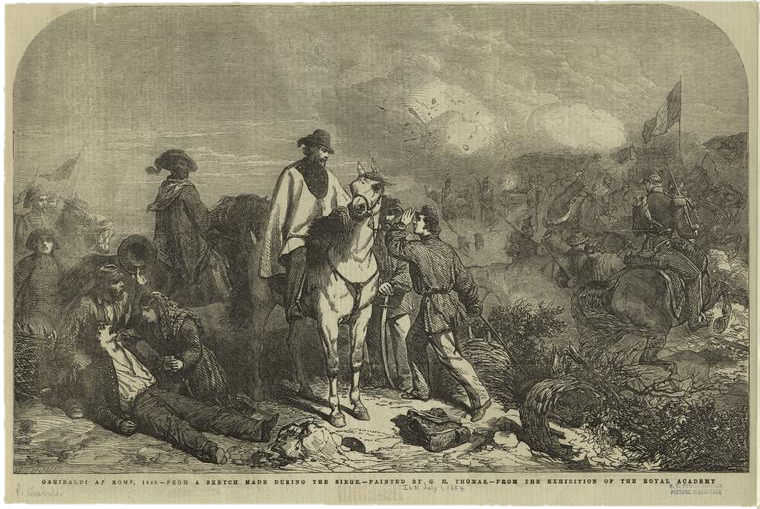 Garibaldi At Rome, 1849, From A Sketch Made During The Siege.

Subsequently, French reinforcements arrived, and the siege of Rome began on 1 June. Despite the resistance of the Republican army, the French prevailed on 29 June.

On 30 June the Roman Assembly met and debated three options: surrender, continue fighting in the streets, or retreat from Rome to continue resistance from the Apennine mountains.

Garibaldi made a speech favouring the third option and then said: Dovunque saremo, colà sarà Roma (Wherever we may be, there will be Rome).

A truce was negotiated on 1 July, and on 2 July Garibaldi withdrew from Rome with 4,000 troops. The French Army entered Rome on 3 July and re-established the Holy See‘s temporal power.

Garibaldi and his forces, hunted by Austrian, French, Spanish, and Neapolitan troops, fled to the north with the intention to reach Venice, where the Venetians were still resisting the Austrian siege.

After an epic march, Garibaldi took momentary refuge in San Marino, with only 250 men still following him.

Anita, who was carrying their fifth child, died near Comacchio during the retreat.

As with many events in the 1800s, such popular interest was depicted on Staffordshire Prattware pot lids, the pots containing popular relishes, salves, and creams. 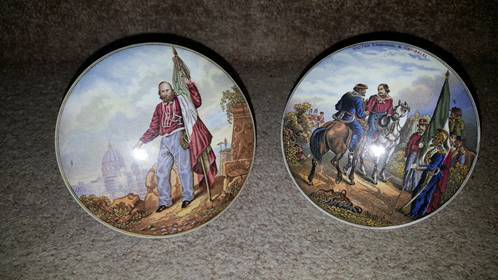 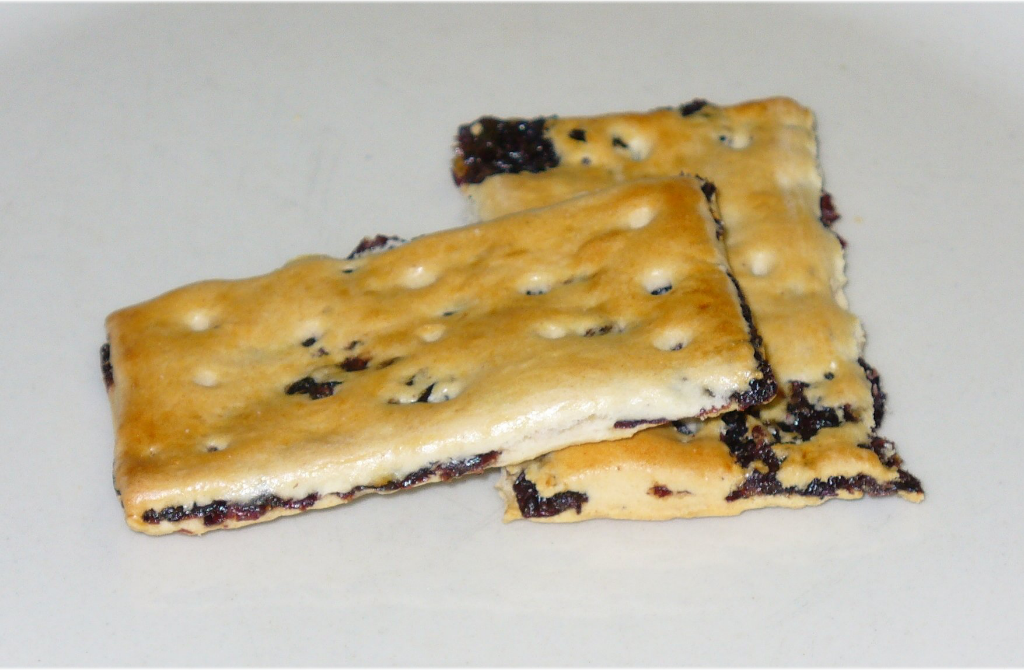 Garibaldi joined Freemasonry during his exile, taking advantage of the asylum the lodges offered to political refugees from European countries governed by despotic regimes.

At the age of thirty-seven, during 1844, Garibaldi was initiated in the L’Asil de la Vertud Lodge of Montevideo.

This was an irregular lodge under a Brazilian Freemasonry not recognized by the main international masonic obedience’s, such as the United Grand Lodge of England or the Grand Orient de France.

While Garibaldi had little use for Masonic rituals, he was an active Freemason and regarded Freemasonry as a network that united progressive men as brothers both within nations and as a global community.

Garibaldi’s Masonic connections were explored in an exhibition at Freemasons’ Hall in London between May and August 2014, to mark the 150th anniversary of his visit to London. Lodge Italia No 2687 of London proudly boast his sword.

There is a proposal for a new lodge in the Province of Bedfordshire to bear his name. Bedford always welcomed the Italian diaspora, the people finding work in the brickfields, the health service, and contributing to the community. Worthy recognition of a Mason and Patriot.