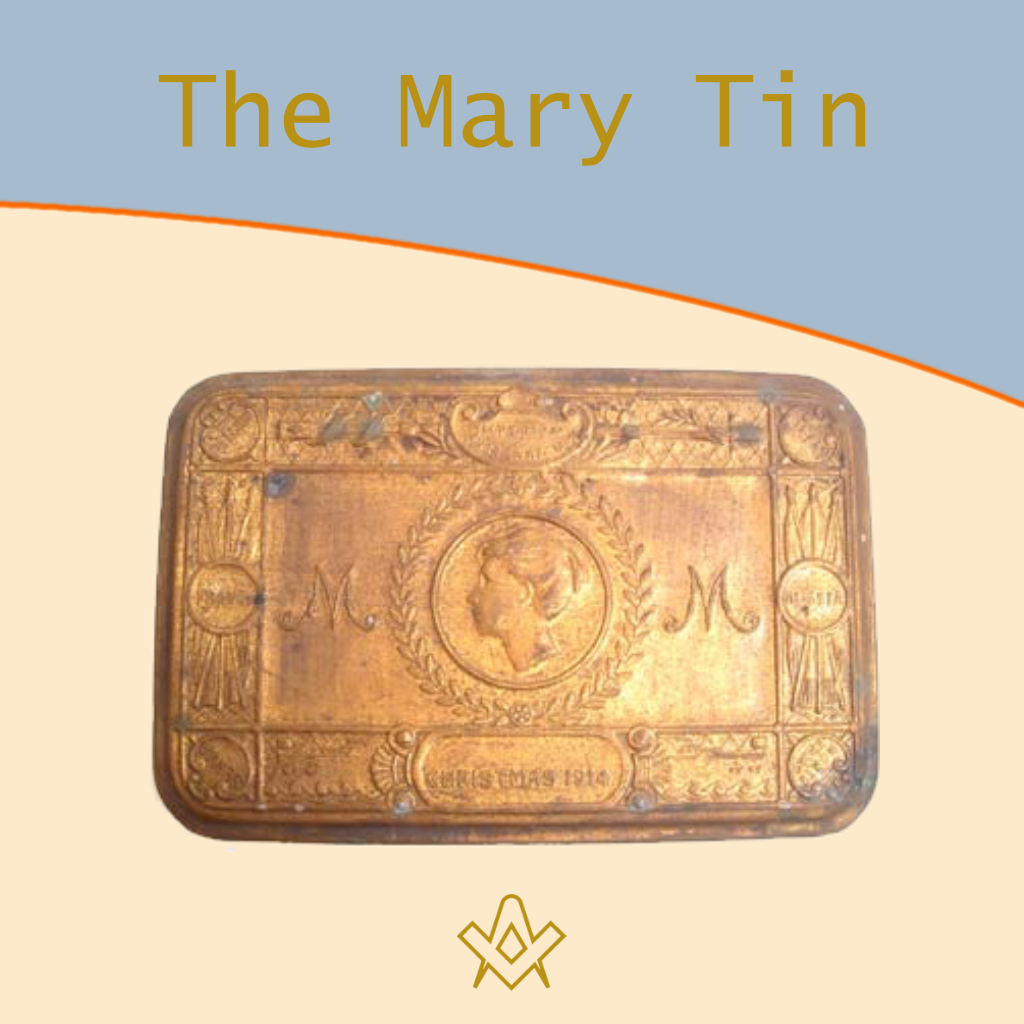 A great story foretells the 1914 Christmas ‘Mary Tin’ (also known as the Princess Mary Christmas Gift Box) issued to the troops during World War One.

In good unpolished order, in fact hardly touched, it measures 5 by 3 ½ by 1 inch. But who was Mary, and what is the Masonic connection? 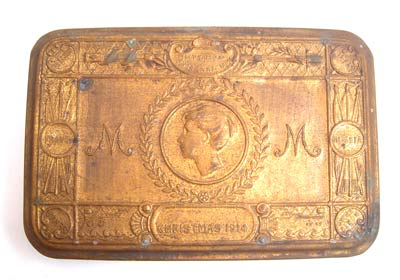 Christmas 1914 was a unique Christmas. When Britain had gone to war against the Central Powers the previous August, there was a great optimism that the war would soon be over and the troops would be home to enjoy their respective celebrations.

The festive period produced a relaxed atmosphere on many parts of the front, with reports of many cases of fraternisation with the enemy.

What in fact transpired in the long-term was a bitter stalemate, with troops entrenched opposite one another on a 475 mile-long front for a period of over four years, with none of the good will of that first Christmas.

In August 1914, Britain first sent over to France and Belgium the British Expeditionary Force (BEF), that ‘contemptible little army’.

The call for additional volunteers had been overwhelming, and the hearts of the British nation, and, indeed, the Empire, went out to those troops who were facing a Christmas away from their loved ones back home.

Various organisations and individual members of the public were generous in their supply of food, tobacco, warm clothing and other little ‘treats’ for the soldiers at the front and the sailors afloat.

The tin itself depicts the head of Princess Mary in the centre, surrounded by a laurel wreath and flanked on either side by the ‘M’ monogram.

At the top a decorative cartouche contains the words Imperium Britannicum with a sword and scabbard either side.

On the lower edge, another cartouche contains the words ‘Christmas 1914′, which is flanked by the bows of battleships forging through a heavy sea. In the corners, small roundels house the names of the Allies: Belgium, Japan, Montenegro and Servia; France and Russia are at the edges, each superimposed on three furled flags or standards. 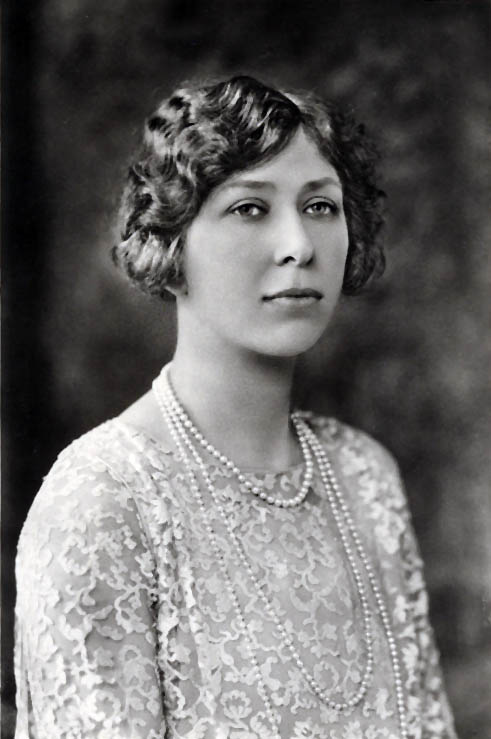 Mary, Princess Royal and Countess of Harewood, from a 1926 postcard

In November 1914, an advertisement was placed in the national press inviting monetary contributions to a ‘Sailors & Soldiers Christmas Fund’ which had been created by Princess Mary, the seventeen year old daughter of King George V and Queen Mary.

The purpose was to provide everyone who would be wearing the King’s uniform on Christmas Day 1914 with a ‘gift from the nation’.

After her marriage she held the title of Countess of Harewood.

The response was truly overwhelming, and it was decided to spend the money on an embossed brass box, based on a design by Messrs Adshead and Ramsey.

The contents varied considerably; officers and men on active service afloat or at the front received a box containing a combination of pipe, lighter, 1 oz of tobacco and twenty cigarettes in distinctive yellow monogrammed wrappers.

Non-smokers and boys received a bullet pencil and a packet of sweets instead.

Indian troops often got sweets and spices, and nurses were treated to chocolate.

Many of these items were dispatched separately from the tins themselves to replace the standard issue of tobacco and cigarettes.

Orders for brass strip were placed with the USA, who were not yet involved in the war, and a large consignment was lost with the ship Lusitania.

As so much brass was being consumed in the production of weapons and munitions, the quality of the boxes which were manufactured later on was poor, being of a plated inferior alloy, or ‘pinchbeck’, when compared with the earlier pure brass examples.

It has been stated that the superior quality brass boxes were reserved for officers, although no evidence now exists to support this.

When the fund finally closed in 1920, almost £200,000 had been donated for the provision of more than two and a half million boxes with contents.

Mary married Viscount Lascelles in 1922 whose father was the current Queens private Secretary, a disciplinarian, and he, when he inherited the Earldom of Harewood on his father’s death, became the 6th Earl.

After her husband’s death in 1947, the Princess Royal lived at Harewood House with her elder son and his family.

She became the chancellor of Leeds University in 1951, and continued to carry out official duties at home and abroad.

She attended the coronation of Queen Elizabeth II in June 1953 and later represented the Queen at the independence celebrations of Trinidad and Tobago in 1962 and Zambia in 1964.

One of her last official engagements was to represent the Queen at the funeral of Queen Louise of Sweden (formerly Lady Louise Mountbatten) in early March 1965.

Later in 1965, the Princess Royal suffered a fatal heart attack during a walk with her elder son, Lord Harewood, and his children in the grounds of the Harewood House estate.

She was buried at Harewood after a private family funeral at York Minster. 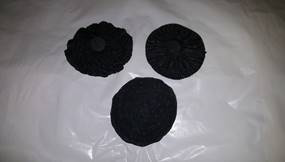 Masonically, and of significant note, Viscount Lascelles, Lord Harewood, became Grand Master of the United Grand Lodge of England in 1943, although his tenure was cut short by his untimely death in 1947 (4 years) which led to six months of Masonic mourning and the adorning of ‘black’ rosettes on aprons.

Some text sourced from Wikipedia under the Creative Commons Attribution-ShareAlike 3.0 https://creativecommons.org/licenses/by-sa/3.0/

Christmas 1914: The First World War at Home and Abroad

By December, 1914, it had become clear to even the most optimistic observer that the war would not be over by Christmas.

That month brought the first enemy-inflicted deaths of the war, when German warships bombarded three northeast coastal towns; meanwhile, the recently invented airplane was being put to deadly use in raids over the southeast.

In France that month, the Battle of the Marne gave a taste of the devastating power of modern warfare—a reality to which troops in the trenches on both sides tried to turn a blind eye in the famous Christmas truce.

This book uses contemporary newspapers and magazines, diaries, and other records to present a comprehensive image of this extraordinary Christmas, both at home and abroad.