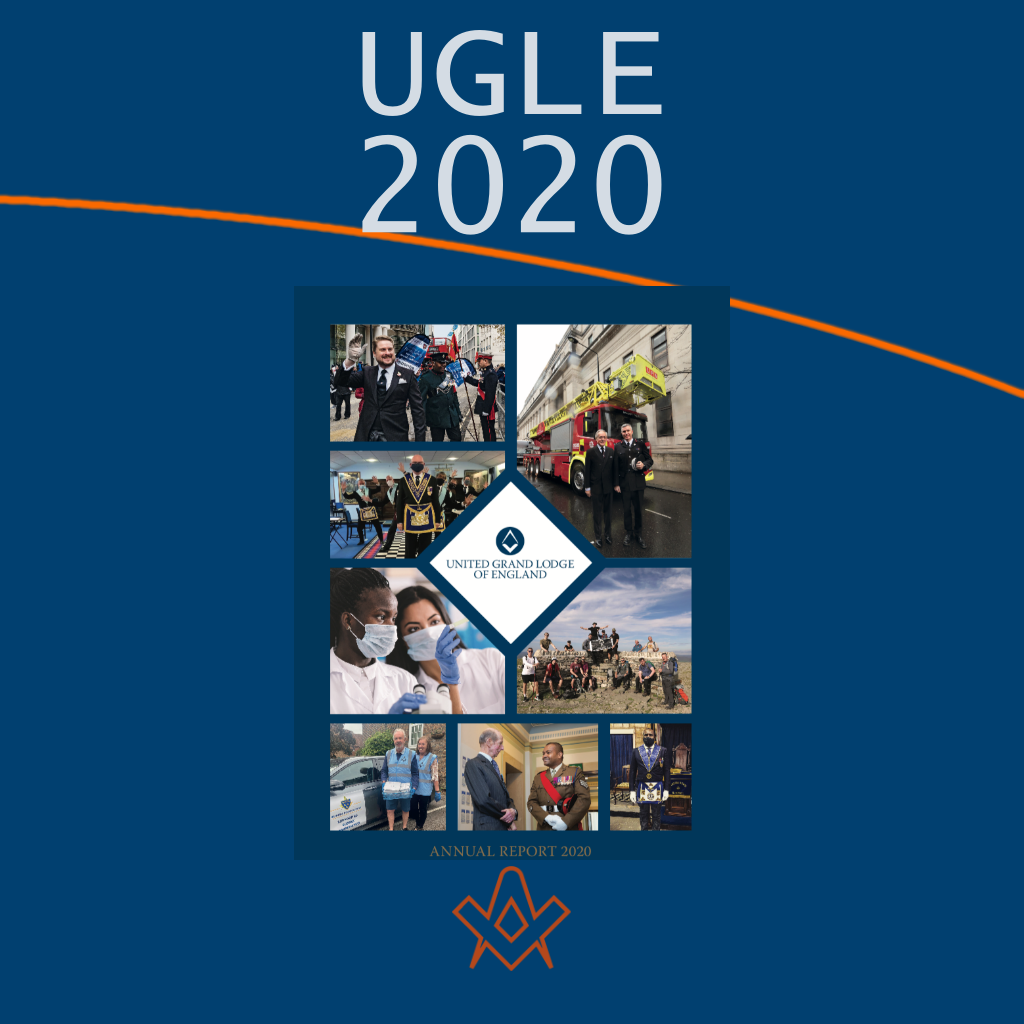 The Annual report is the recently published 52 page document that highlights the activities Freemasons have contributed to our communities during 2020.

An unprecedented year overshadowed by COVID-19 and the reduction in masonic meetings due to government lockdowns.

The document is a milestone in the openness that is transforming UGLE. The transparency UGLE is opening to members and transparency with the wider public.

The report opens with a statement from The Grand Master, His Royal Highness Prince Edward, Duke of Kent

“Some years ago a decision was taken to tell people our history, to begin to explain who Freemasons are and to speak to people about what  it is that we do.”

The Grand Master sets the stage that this report is written for an audience of both Freemasons and non-freemasons as it highlights many of UGLE’s charitable activities in the community. 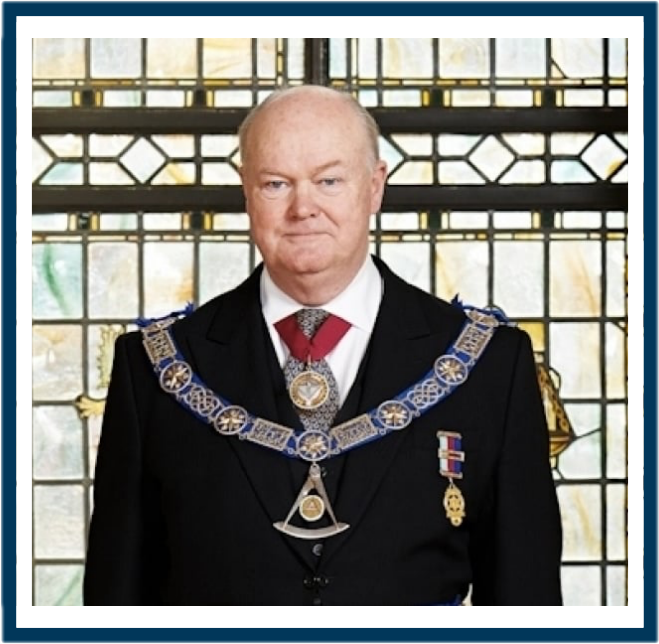 “At first, I thought it a bit odd to launch our very first annual report in respect of a year marked by the suspension of most Masonic activity. “

Peter continues to recognise the personal efforts of members:

“You have demonstrated by your resilience, generosity of spirit and embodiment of our core values that there is an overwhelming desire to make our organisation even stronger and more united”

In his upbeat statement says that he:

“Looks forward to, not only with the resumption of our regular meetings, our ceremonies, our initiation of new members, our ability to advance and promote enthusiastic and capable Lodge officers, but also both in terms of the rolling out the initiatives mentioned above and in terms of significant dates and events to celebrate in the near future”

“I warmly commend this Report to you. It is arguably overdue as an important step in our journey, not only towards greater transparency and public engagement, not only towards greater professionalism as befits a large members’ organisation, but also as a means of reminding our members and the wider world of how Freemasonry has been a hugely influential and benevolent force from its very beginnings and how its teachings today, largely unchanged over the past three centuries, shape us to be better citizens and better people.”

Board of General Purposes

This statement outlines some of the new initiatives planned by UGLE over the coming months and years ahead. 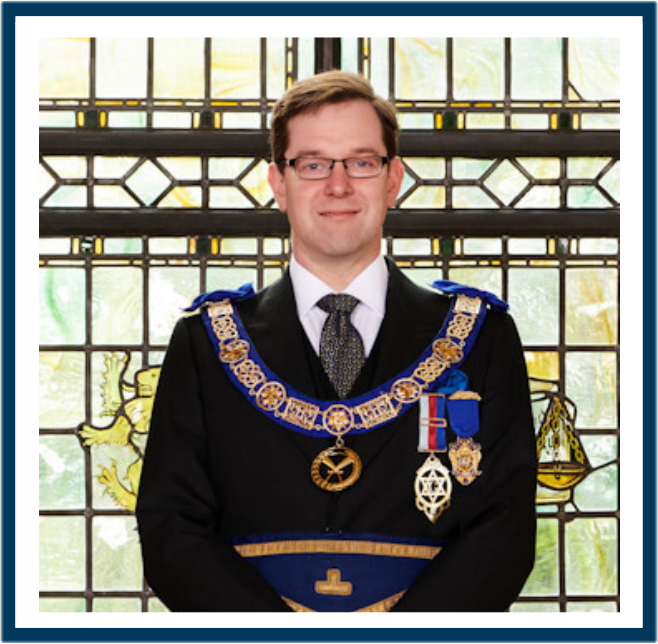 “for the first time, Grand Lodge is able to talk directly and regularly with [members]”

We [UGLE Communications Team] have secured an estimated £1.35 million pounds worth of national media coverage this past year with over 53 million people seeing coverage of our Covid-19 response efforts.

Use of Twitter social media to communicate with a wider audience, such as the ‘Time to Toast’ campaign went global and was emulated by many foreign Grand Lodges, with #Timetotoast trending at no. 20 on Twitter.

One of the most striking changes over my time at Grand Lodge has been the increase in two-way communications between the 47 Provinces, Metropolitan Grand Lodge, our overseas Districts and the Centre.

This highly effective group has already championed the introduction of Provincial and Lodge Membership Officers and reduced the minimum age for membership without the need for a dispensation – bringing it into line with the national age of majority.

[UGLE]  have sought to develop a professional, fit for purpose, efficient central office, held in high esteem by you, the membership. It should engender pride and a desire to perform to an excellent standard in its staff, which also communicates an appealing, confident, relevant and consistent message to the outside world.

“We are the same organisation, with the same values and traditions that have served us well for over three centuries”

As can be expected, COVID-19 was a dominating event during 2020 and was a focus on Freemasons charitable activities.

There is a comprehensive statement which highlights the money raised by our members and distributed to good causes, as well as their time given voluntarily to help the vulnerable during the pandemic.

Lifelites, which gives life-limited and disabled children in hospices across the British Isles the chance to play, be creative, control something for themselves and communicate, through the magic of assistive technology.

The Freemasons’ Fund for Surgical Research (FFSR) provides Research Fellows of the Royal College of Surgeons (RCSE) with grants each year to pursue cutting edge research work, which might otherwise not have been funded.

For over 50 years the FFSR has supported much ground breaking research and many of the Fellows have gone on to distinguished careers. 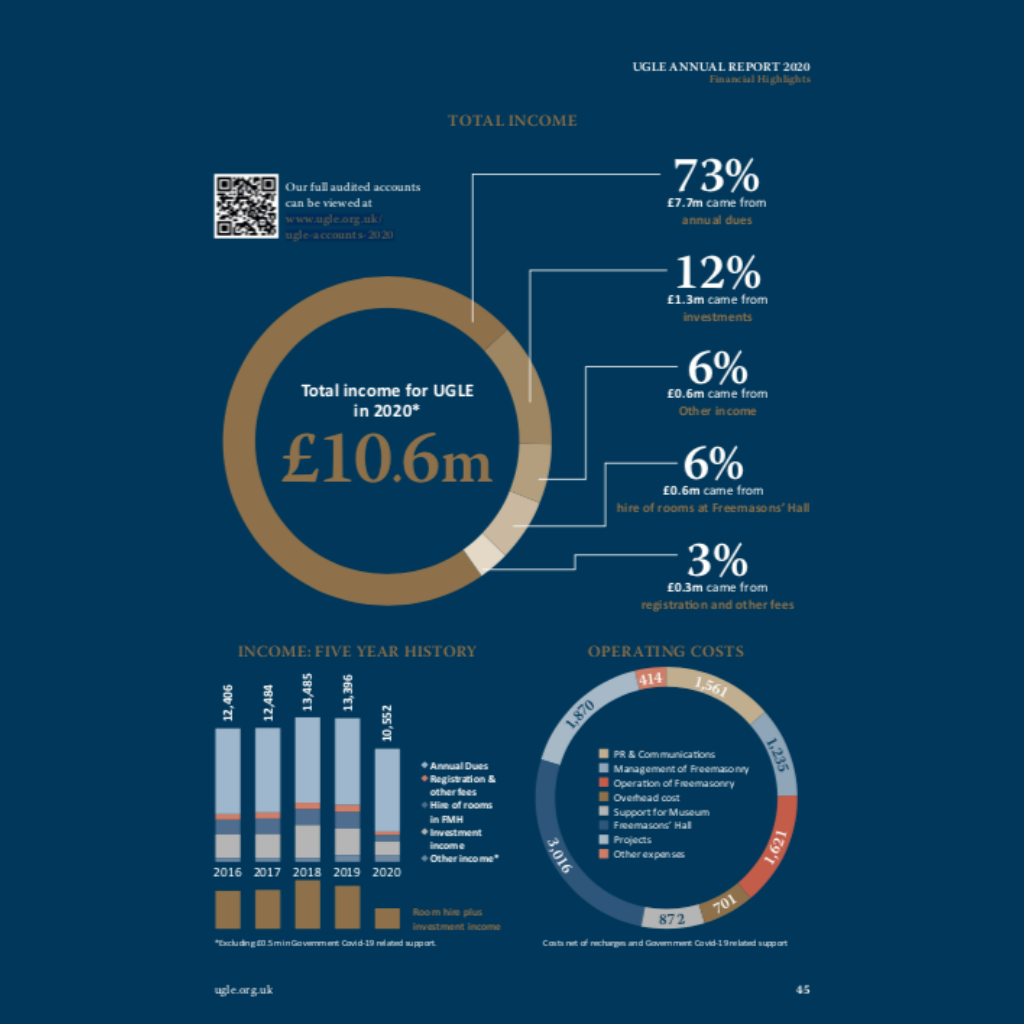 2020 was a remarkable year for the Grand Lodge. Our income declined substantially as the Coronavirus pandemic caused many of our operations to be shut down for large portions of the year. Income from registration fees and room hire effectively vanished, and our investment income halved. Excluding the shop and Government assistance, our total income declined by £2.8m (22%) compared with 2019. 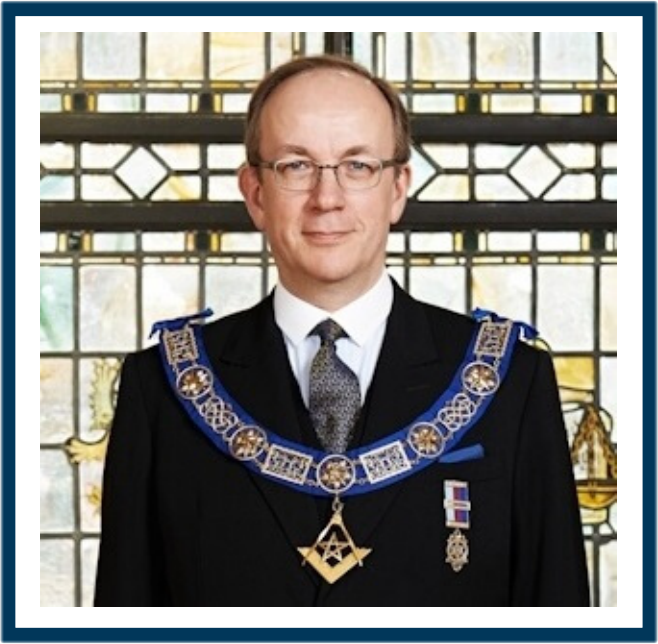 The Deputy Grand Master, Jonathan Spence, has been chairing a small working group with a brief from the Pro Grand Master to consider the Strategy for UGLE from 2022 and beyond.

James Long, Deputy President of the Board of General Purposes and a member of that working group, asked him to share some insights.

This is a very encouraging section in the annual report, and I recommend members take time to read this section if no other.