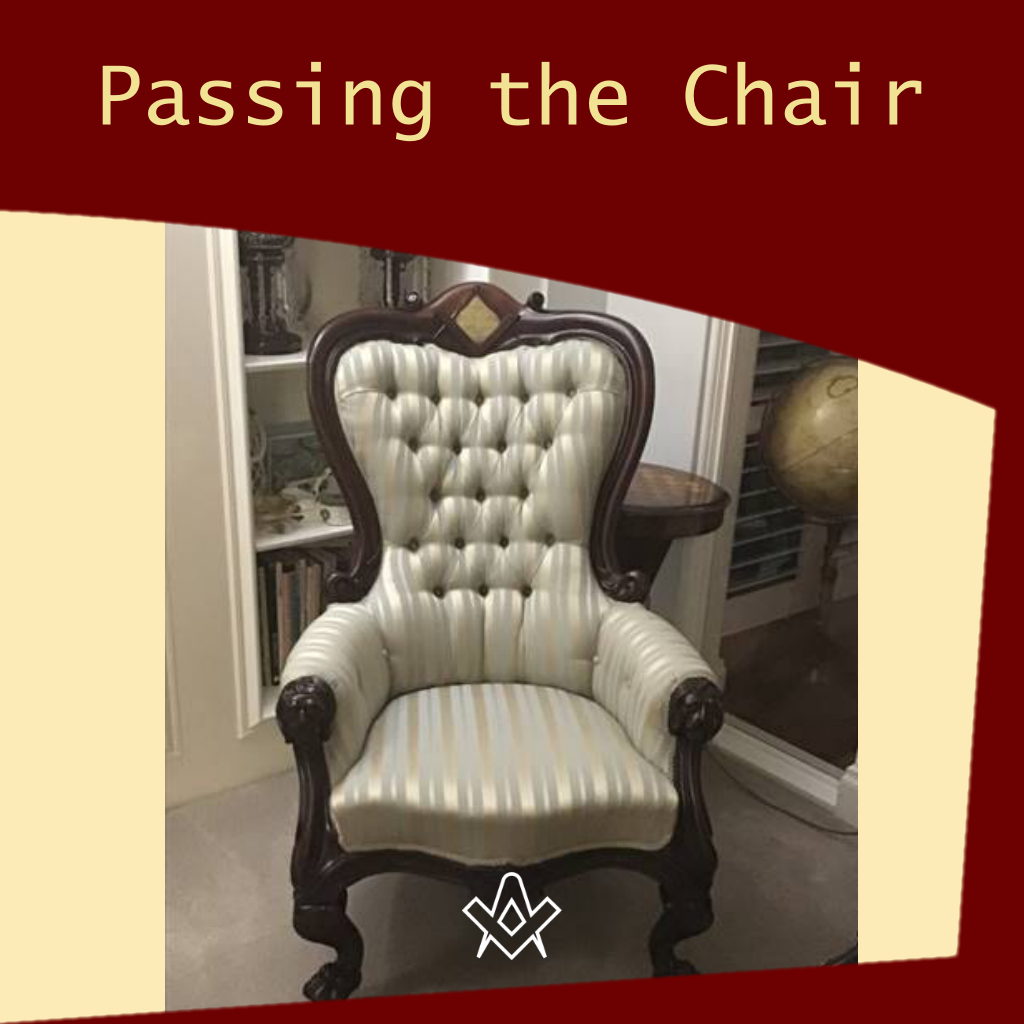 The story begins with this chair turning up in Australia when recently the owner had it refurbished only to reveal a previously unseen plaque.

He had bought the chair along with other antique furniture in an auction when domiciled in London in the 1960s whilst training as a medical doctor. 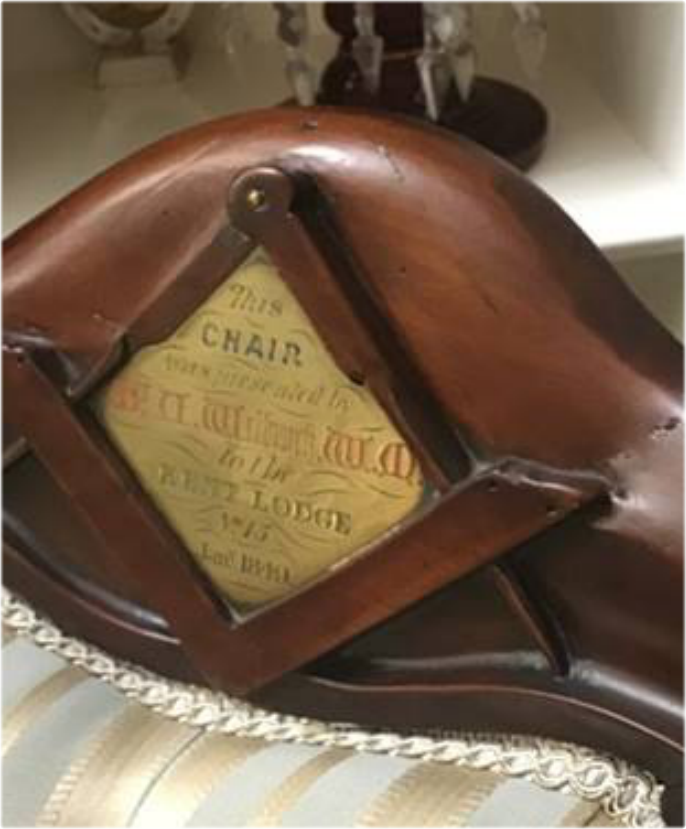 This CHAIR Was presented by Br H Welbrook WM(I) to the KENT LODGE No15 Jan 1849 –
IMAGE CREDIT: Paul Gardner

Delving into Kent Lodge’s history it was confirmed Bro. Welbrook reached the Chair of King Solomon in the year 1849 and endowed the Lodge with this chair to mark the occasion.

In those far off days many lodges meeting in hostelries had their own ‘tools’ and furniture and it went from venue to venue with them.

At the time they met at Gerrard’s Hall, Basing Lane, London, moving to the Bridge House Hotel two years later.

Between 1800 and 1900 they had thirteen places where meetings were held. A history note of February 1869 relates on the move to the Guildhall Coffee House:

‘That the Tyler be empowered to remove the Lodge furniture forthwith’

According to Bernard E Jones FREEMASONS’ BOOK OF THE ROYAL ARCH it was originally expressly laid down in Rule 6 that the Candidate for the R.A. must have attained three progressive degrees; have passed the chair; been registered in the Grand Lodge books, as a Master Mason, for twelve months at least.

Then, approved on examination by one of the Grand Chiefs or Grand Scribes, to ascertain which certificate must be given and signed in open lodge and further attested by the Grand Secretary. But this was to change…..

Bridging the eighteenth and nineteenth centuries none but Installed Masters were acceptable as Candidates for the Royal Arch.

Passing the chair was a device originally designed for the one purpose of giving the Master Mason who had not ruled a lodge the status qualifying him as a Candidate.

Originally, it is believed, it was introduced by the Antients, but was soon adopted by the Moderns.

This probably took the form of installing the Third Degree Mason in the Master’s Chair, then facilitating his leaving the chair quickly thereafter.

Whatever the practice became in the course of a few years, it is quite clear that under the rules of the first Grand Chapter (1766) it was not necessary for the Candidate to be of higher rank than Master Mason.

Neither these rules nor those given in the Charter of Compact required or could require the Candidate to be a Past Master. 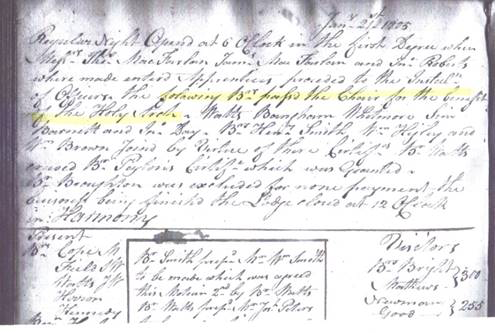 Regular night opened at 6 O’clock in the first Degree where Bro and Bro were made entered Apprentices proceeded to the Installation following Bros pass’d the Chair for the benefit of the Holy Arch.

This entry in an old minute book of 1805 confirms the practice albeit a Monday. Interestingly this was often performed on a Sunday, a meeting day outlawed some years later.

When the Chapters became independent, the regulation could not be abolished, for that would have been an innovation.

A candidate for the Degree of Royal Arch by Virtual Past Master degree (Chairing) before his exaltation under the English Constitution was forbidden in 1826.

The Committee appointed to formulate Regulations worked quickly and presented a draft to Grand Chapter on 15 April 1817.

They were accepted and set the seal on the future arrangement and development of the Grand Chapter.

They also marked the new relationship between the Craft and the Royal Arch and the interdependency of the two.

Times have changed and adjustments made and in the modern era a clarification of the status with some relaxation envisaged by a working party which reported in 2003.

The proposed wording to be placed before Grand Lodge for approval in December states that:

“At the Quarterly Communication of 10th December 2003 the United Grand Lodge of England acknowledged and pronounced the status of the Supreme Order of the Holy Royal Arch to be ‘an extension to, but neither a superior nor a subordinate part of, the Degrees which precede it’.”

It is not suggested for one moment that this removes outright the effect of the famous ‘fudge’ of 1813. 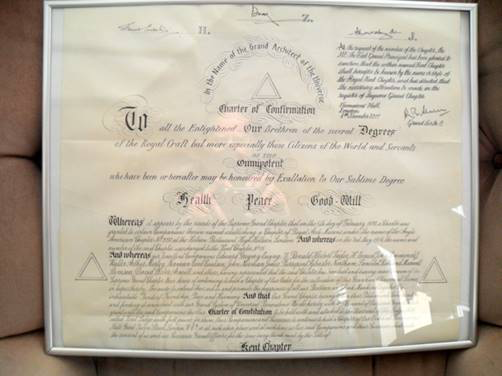 Chapters were to be no longer independently chartered but were to be sponsored by a Lodge, to whose warrant the Chapter was to be attached, and whose number and, later, name they were to bear.

Chapters with charters from the original Grand Chapter were to return those charters in exchange for a Charter attaching them to a Lodge of their choice.

History needs to be constantly updated and recorded and in 2016 Kent Lodge re-adopted its early title of ‘Royal Kent Lodge No15’ by the approval of the Grand Master following a decade of research into its unbroken history.

The Royal title was originally used in 1816, so named after the Duke of Kent, the Grand Master of the Antients at the time of the Union.

It fell out of use after 1820 when the Duke died. The associated Chapter likewise was permitted to change its title a year later. 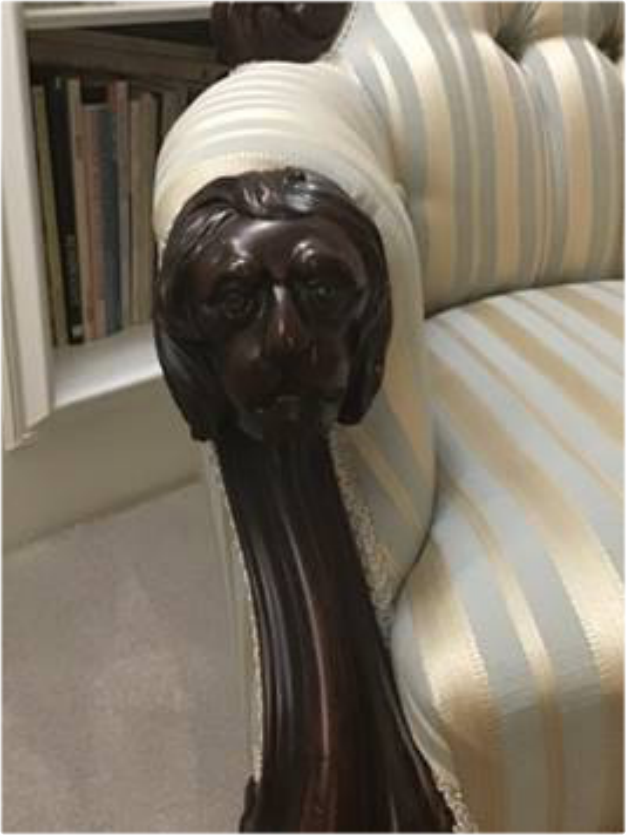 Apparently, the matter can be summed up in this way. All Antients’ Royal Arch lodges and chapters required Candidates to have passed the chair, actually or virtually, and a number of Moderns’ chapters did the same, but certainly not all of them.

A necessary event, extant into the 19th century, to complete a mason’s journey into Antient Freemasonry,

Although a long gone practice it would be tantalising to think that  this  chair could have been used for such purposes by Kent No.15. An Antient lodge with continuous working and a lion’s spirit since 1752 !