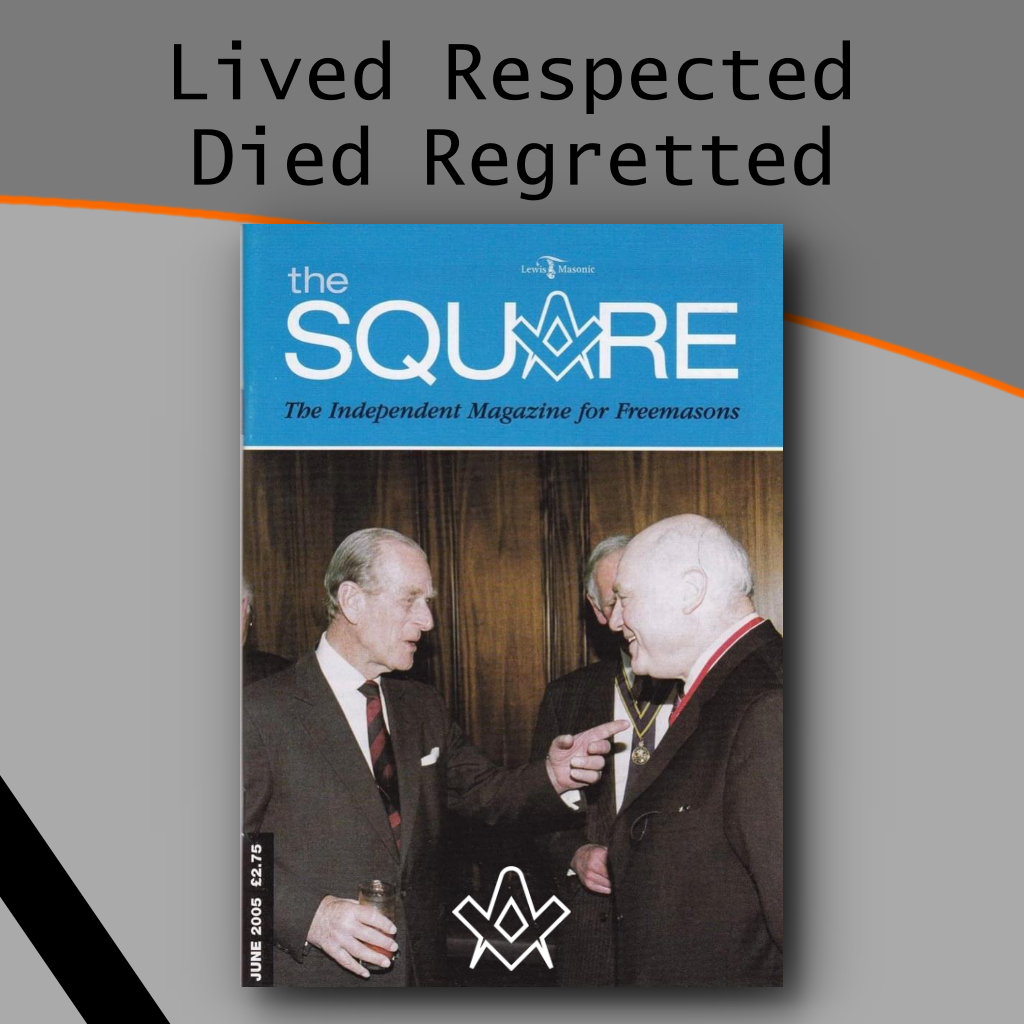 The death of HRH The Prince Philip, Duke of Edinburgh, although expected, sent shockwaves throughout the nation.

No one could doubt his unwavering dedication and love of his beloved wife, Her Majesty the Queen but it was his contribution and service to the Crown, Great Britain and the Commonwealth that was his life’s work.

The Duke’s royal Patronages and commitments to charities and foundations numbered almost a thousand and primarily included organisations that echoed and complemented his myriad interests and passions:

‘Over the course of his life, His Royal Highness was associated with 992 organisations, either as President, Patron, Honorary Member or in another capacity, with special interests in scientific and technological research and development, the welfare of young people, education, conservation, the environment and the encouragement of sport.’ 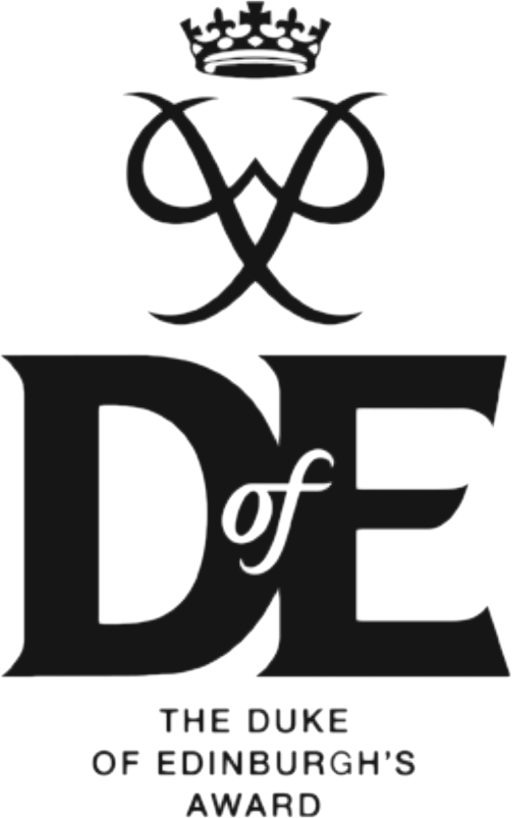 Some of these organisations were very high profile, such as the WWF, but essentially it was The Duke of Edinburgh’s Awards, which epitomised his vision and passion for inspiring young people to become independent, embrace adventure, and subsequently find their place in the world.

One thing few members of the public were aware of was his role within Freemasonry – the Duke was a full member of Navy Lodge No. 2612 for 68 and a half years.

His philosophy, balanced nature, and dedication to exploring the Arts and Sciences are something he would have found mirrored within Freemasonry, and although he was not always active in the Craft, his full membership of Navy Lodge demonstrated his dedication to, and interest in the Fraternity and he was a Brother until his death.

According to Freemasonry Today:

The Duke of Edinburgh was known to drop into meetings at his Freemasons Lodge almost unannounced.

Navy Lodge has a storied past and an amazing roster of luminaries appear upon its membership roll.

The Lodge prides itself on being the premier Naval Lodge in the world, with an unparalleled history that includes four monarchs as past members – King Edward VII, King Edward VIII, King George VI and King George II of the Hellenes.

The Square would like to pay tribute to this remarkable man and what better way than including the words of those who knew him personally.

It is with sincere thanks to David Swain of Navy Lodge No. 2612, and Masonic author Robert Lomas for their heartfelt contributions to this article. 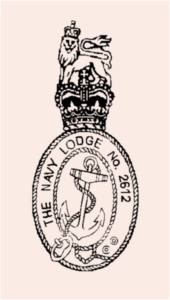 HRH The Prince Philip, Duke of Edinburgh, was born Prince of Greece and Denmark on 10 June 1921 at Villa Mon Repos on the island of Corfu. As a boy he lived for a while in France and, like HM Queen Elizabeth II, he too is a great-great-grandchild of Queen Victoria.

Prince Philip began school in France but came to England in 1928 to attend Cheam Preparatory. He left at 12 to spend one year at Salem School in southern Germany before attending Gordonstoun School in Morayshire. Philip became Head of the School and Captain of Hockey and Cricket.

He entered Britannia Royal Naval College, Dartmouth, in 1939 as part of the Special Entry Scheme and won the King’s dirk, the prize for best cadet.

Prince Philip saw active service throughout World War II and was a midshipman in the battleship HMS Ramillies, which escorted the first contingents of the Allied Expeditionary Force from Australia to Egypt.

In January 1941, he was posted to the Mediterranean fleet aboard the battleship HMS Valiant where, amongst other engagements, he was involved in the Battle of Crete.

During a night-action off Cape Matapan, against the Italian Fleet (21 March 1941), Prince Philip was in charge of HMS Valiant’ssearchlight control for which he was mentioned in despatches.

He was promoted Lieutenant on 16 July 1942 and in October was appointed First Lieutenant of HMS Wallaceat the unusually early age of 21 and subsequently took part in the Allied landings on Sicily.

Towards the end of the war he served, again as First Lieutenant, in the destroyer HMS Whelp in the Pacific and was present in Tokyo Bay for the Japanese surrender on 2 September 1945.

After the war, in February 1947, he became a naturalised British subject.

On 9 July 1947, his engagement to Princess Elizabeth, now 21, was announced and the marriage took place in Westminster Abbey on 20 November that year.

Shortly before the wedding, he was created Duke of Edinburgh, Earl of Merioneth and Baron Greenwich with the style of His Royal Highness and appointed a Knight of the Order of the Garter by HM King George VI.

After the wedding, he continued his naval career; he was promoted Lieutenant-Commander on 16 July 1950 and given command of the frigate HMS Magpie.

From July 1951 he took up no further active appointments due to Princess Elizabeth’s royal engagements. He was promoted Commander on 10 June 1952 and then, on retiring from the active list, straight to Admiral of the Fleet on 15 January 1953.

He was appointed Captain-General of the Royal Marines on 1 June 1953, a position he held until succeeded by Prince Harry on 19 Dec 2017.

Besides holding a number of honorary ranks in all three services, in 2011 HM the Queen honoured him by transferring to him her title of Lord High Admiral.

He was a prolific writer on environmental, technological, equestrian and animal subjects. 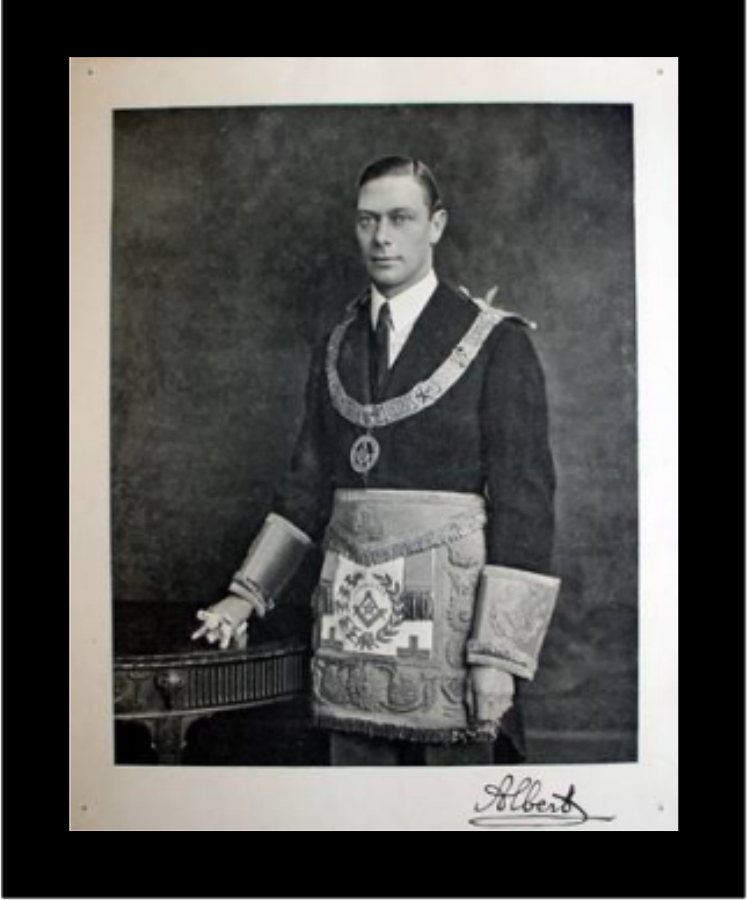 His introduction to Freemasonry came through his father-in-law King George VI, who himself had been initiated into Navy Lodge, following in the footsteps of his Grandfather King Edward VII, our first Worshipful Master. 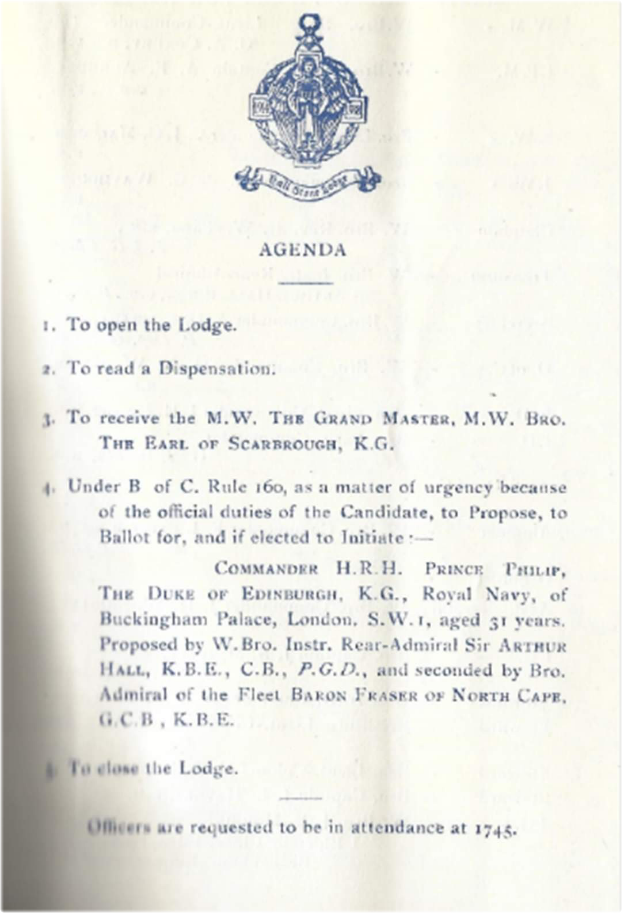 Commander Prince Philip was duly initiated into Navy Lodge on 5 December 1952 at an Emergency Meeting held in Freemasons’ Hall, when no private guests were allowed.

There were fifty-two lodge members present and just twelve official guests, including the MW Grand Master, The Earl of Scarborough.

Following his rapid promotion, now Admiral-of-the-Fleet Prince Philip was passed on 6 March and raised on 4 May 1953 with the MW Grand Master (again) and MW Grand Master of Scotland in attendance. 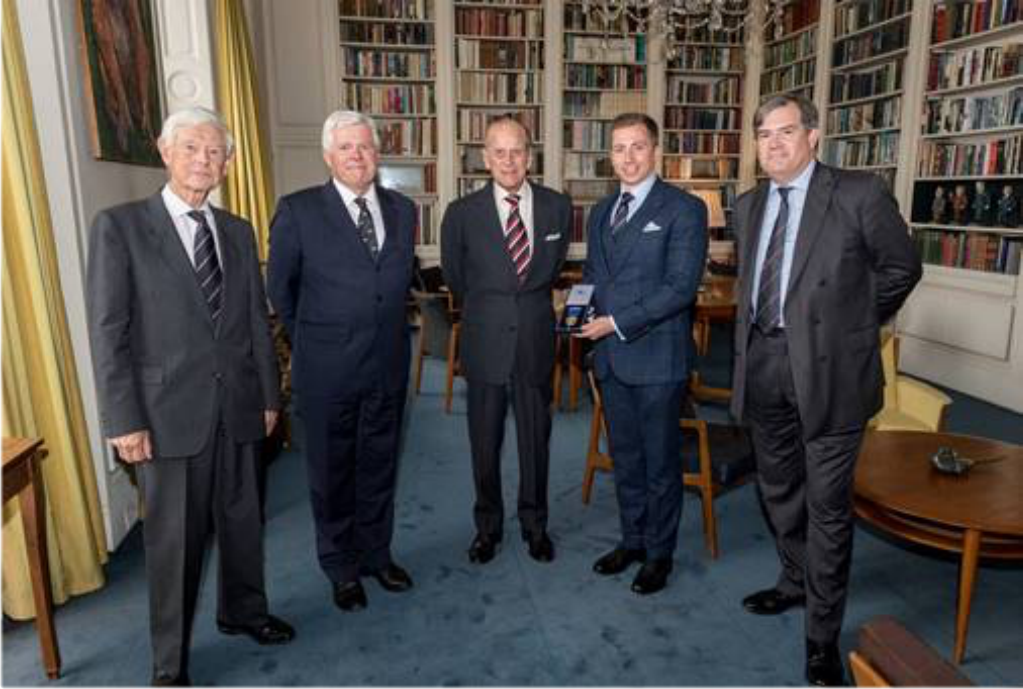 Though he has not played an active role in the lodge since, he has remained a subscribing member and has long retained an interest in our progress.

In order to mark the Tercentenary of Grand Lodge in 2017 the Lodge presented him with a solid gold Tercentenary jewel, suitably engraved.

The Duke kindly received a small Navy Lodge party in his private library at Buckingham Palace, comprising the WM, Secretary, our most senior and junior member.

The date? Most appropriately, it was on 31 May – the anniversary of the Battle of Jutland – one synonymous with so many Navy Lodge members, not least his late father-in-law.

The Duke passed away on the morning of 9 April after 68½ years as a full member of the Lodge leaving Her Majesty the Queen as our senior Lodge widow. 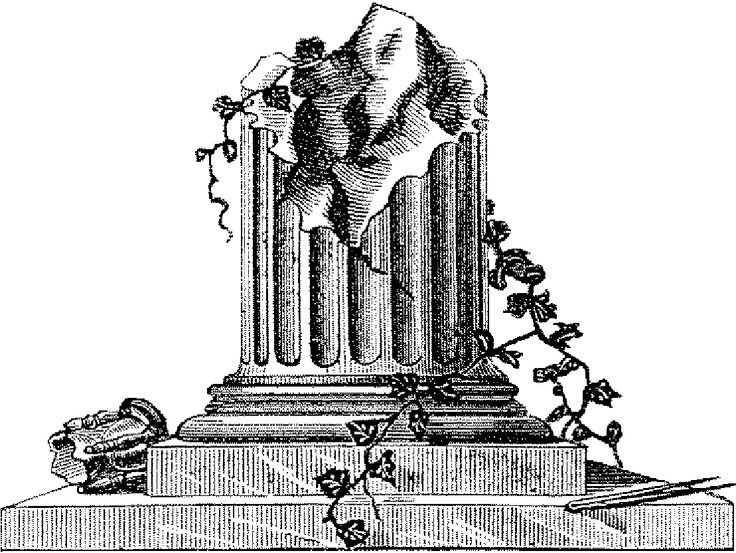 Robert Lomas, the well-known Masonic author, lecturer, and physicist, offers this wonderful personal remembrance of the Duke of Edinburgh, who was Chancellor of Salford Technical College (now Salford University) during Robert’s years there.

Although Bro The Prince Philip was a lifelong member of the Navy Lodge 2612, following in the footsteps of his father-in-law King George VI, he stayed a Master Mason throughout his life, to enjoy the fraternal company of his mother lodge.

I never met him as a Brother Mason, but HRH The Prince Philip became a formative influence on me many years before I qualified as a physicist, let alone became a Mason. I met him on two joyful occasions, as I will explain.

In 1966, I went to Salford Technical College to study for A Levels. For two years I read Pure Maths, Applied Maths and Physics, until in 1966 I qualified for a place at the adjoining Royal College of Advanced Technology. I took a Batchelor’s degree in Electronics in full knowledge that in 1967 the RCAT would become Salford University. What I did not know was who my chancellor would be. I was a first year RCAT student when it was announced the Chancellor of the new University was to be Prince Philip.

His inauguration speech was relayed to the student union where I and my fellow students (who, once Prince Philip was installed, became undergrads) listened to him (we were far too lowly to be invited into the Great Hall for the ceremony although we watched from the 300-floor bar, as the Chancellor’s Procession crossed the 200-floor bridge to the hall.

He made an inspirational speech, beginning:

“We meet together here amid all this display of ceremonial, and almost knee-deep in robes and ritual. But if this symbolism is not to be empty and meaningless, each of us must feel a personal involvement and a personal ambition to give the University of Salford a sense of its own special mission. A university is not just a brain factory, a conveyer belt for PhDs. Neither is it a place to go for its own sake. It is a means to an end and not an end in itself. A university should measure its success just as much by the number of millionaires as by the number of Nobel Prize winners which it produces.”

At that point the crowd of undergrads roared. Jim Wild, Rag Organiser for the Student Union, stood up and shouted “Three Cheers for Prince Phil.” We were in the next building, but I think the assembled crowd of local worthies heard our heart-felt approval of the Queen’s choice of Chancellor for the new university she had authorised in her personal Manor of Salford.

I met HRH for the first time in 1969, moon landing year, when he presided over the Degree Congregation and awarded me a BSc (1st Class) in Electronics.

In those meritorious days we were presented in order of Degree class so I was near the front.

He shook my hand, to officially make me a Bachelor of Science, and congratulated me on the success of my studies, reminding me that everything that was not made by God had to be made by an engineer, and said he hoped I would go on to benefit myself and society through the application of engineering skill.

His interest in engineering and manufacturing was no affectation, it was real. I left the stage on a high. I worked a while at Ferranti but soon realised that to understand integrated circuits and progress in the industry, I needed to learn more physics so I returned to Salford to begin a PhD.

In 1973, Prince Philip conducted the Degree Congregation. I was amazed when he took my hand and welcomed me back. He said how pleased he was I had continued my studies. (He was probably prompted by a crib sheet, but it was a wonderful human touch.)

I am still proud to say he was the first person to address me as ‘Dr’, and I doffed my newly acquired cap in happy acknowledgment.

He was an inspirational leader of the University and an outstanding ambassador for engineering and science. He remained our Chancellor for 24 years. 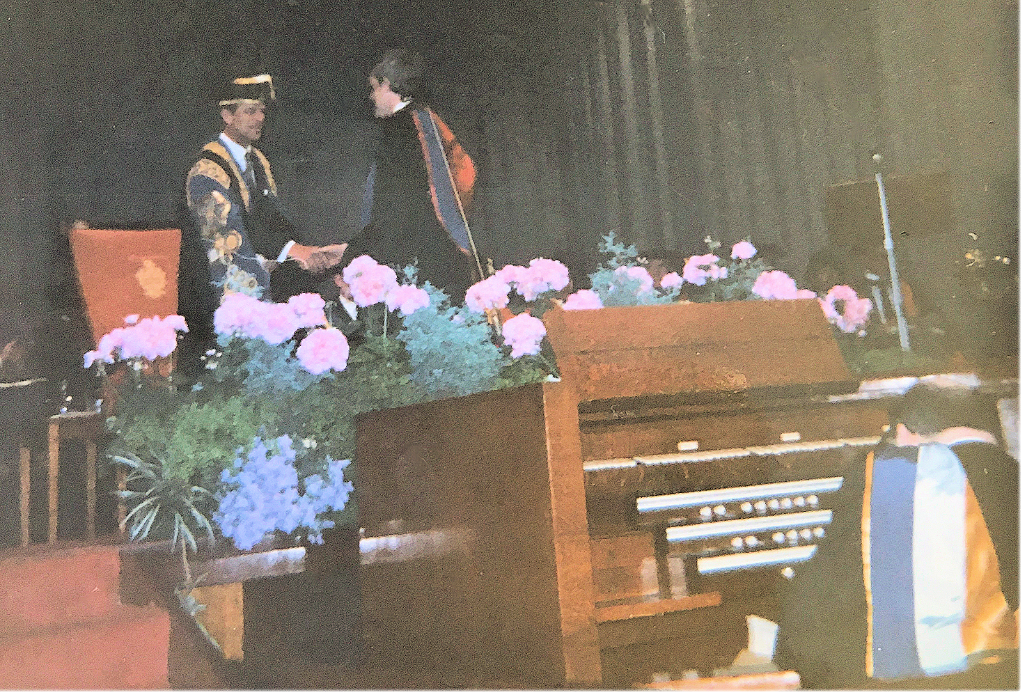 The photo was taken by Robert’s late mother on a Kodak Brownie camera so it is a little grainy, but it conveys some wonderful memories.