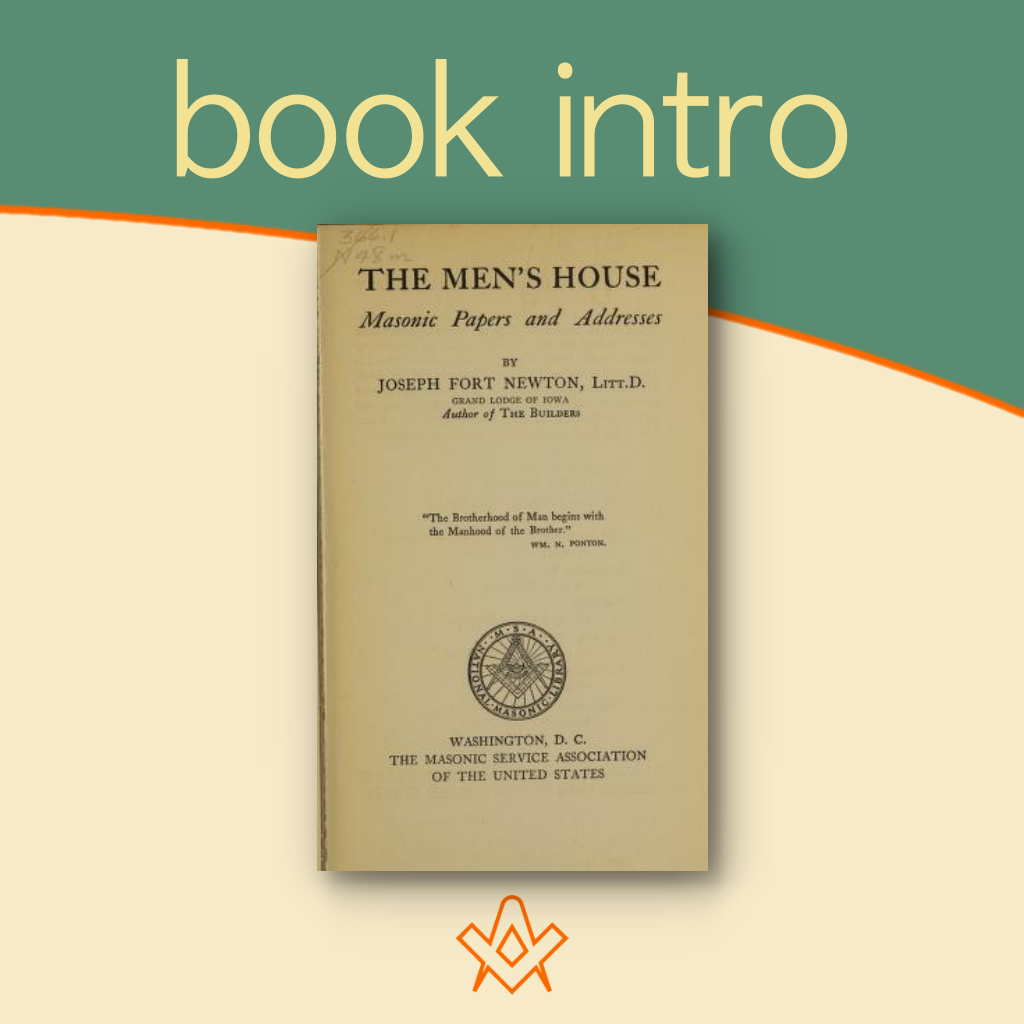 For years I have had repeated requests from many Brethren, both in England and in America, asking me to gather various papers and addresses on Masonic themes into a form more convenient and accessible.

The present selection is not complete, but it may serve the purpose desired, and perhaps give cumulative effect to words spoken at different times and places, at home and abroad, in the service of our great and gentle Craft.

I inevitably, in a series of addresses covering ten years or more, there will be some repetition of idea, if not of phrase; but it has seemed best to let them stand as they were written, the more because the great truths need to be emphasized with many variations of insight and accent.

During the period covered by these papers my little book, The Builders, was written, and is still busy at its work in many lands and four or five languages; and its readers will find much that is familiar in these pages.

Freemasonry appeals to me, first, by its fellowship; and next to the home and the House of God, it is the most blessed influence in my life.

Its simple and profound faith, its wise and practical philosophy—uniting the wisdom of love with the love of wisdom—illumine my mind, as its genius of fraternity warms my heart.

But still more Masonry appeals to me as an agency for the organization of moral faith, practical brotherhood, and social idealism, the worth and power of which we have not yet realized.

Most of the words of this book were spoken while the Great War and the Little Peace were sweeping over us, leaving disaster, desolation, and disillusionment in their wake.

They have gone, those years, dark, dreadful, and confused; but, by the mercy of God, the ideals set forth in these pages still glow and abide in the heart of the speaker; and he makes bold once more to commend them to his fellow-workmen on the Temple.

In a day when the brotherhood of the world is broken, our ancient and noble Craft has an opportunity, the like of which it has never known before, to use its influence and power to spread that fraternal righteousness without which the future will be as dark as the past.

For the rest, my gratitude is due to Brother H. L. Haywood, editor of The Builder, who has kindly allowed me to use certain papers which appeared in its pages when I had the honor of being its first editor.

Also to Brother Douglas Martin, of the Detroit Masonic News, for the use of a number of articles which appeared in his bright and forward-looking journal; as well as for personal kindnesses which make a rosary in my memory.

To all my Brethren everywhere, the very thought of whom is like music, I send greeting, blessing, and abounding goodwill.

Newton received the third degree of Freemasonry on May 28, 1902 in Friendship Lodge No. 7, Dixon, Illinois, later affiliating with Mt. Hermon Lodge No. 253, Cedar Rapids, Iowa.

He also served as Grand Chaplain of the Grand Lodge of Iowa from 1911 to 1913, and Grand Prelate of the Grand Encampment of Knights Templar.

The Builders has been called “an outstanding classic in Masonic literature offering the early history of Freemasonry.”

Rev. Newton authored over 30 books, perhaps his most famous being The Builders: A Story and Study of Freemasonry, published in 1914, and translated into six different languages.

The Builders is still regarded as one of the best books on the topic. The Men’s House was published in 1923, and his autobiography, River of Years, in 1944.

This anthology is a thorough introduction to classic literature for those who have not yet experienced these literary masterworks.

For those who have known and loved these works in the past, this is an invitation to reunite with old friends in a fresh new format.

From Shakespeare s finesse to Oscar Wilde s wit, this unique collection brings together works as diverse and influential as The Pilgrim s Progress and Othello.

As an anthology that invites readers to immerse themselves in the masterpieces of the literary giants, it is must-have addition to any library.

Chapter 7. the Fellowcrafts - an examination into the history of the medieval guilds, their charges and regulations that form the base for the allegories and symbols in our modern versions of masonic craft ritual. By Joseph Fort Newton

The Builders – 6: The Free-Masons

Chapter 6. The Free-Masons - an examination into the history of the medieval guilds, their charges and regulations that form the base for the allegories and symbols in our modern versions of masonic craft ritual. By Joseph Fort Newton

The Builders – 5: The Collegia

Chapter 5. The Collegia - If the laws of building were secrets known only to initiates, there must have been a secret Order of architects who built the temple of Solomon. Who were they?

The Builders – 4: The Secret Doctrine

Chapter 4. The Secret Doctrine - Explore an outstanding classic in Masonic literature - an exposition of the early history and symbolism of Freemasonry – from the foundations upwards. By Joseph Fort Newton

The Builders – 3: The Drama of Faith

Chapter 3. The Drama of Faith - Explore an outstanding classic in Masonic literature - an exposition of the early history and symbolism of Freemasonry – from the foundations upwards.

The Builders - 2: The Working Tools

Chapter 2. The Working Tools - Explore an outstanding classic in Masonic literature - an exposition of the early history and symbolism of Freemasonry – from the foundations upwards.

The Builders – 1: The Foundations

Chapter 1. The Foundations Explore an outstanding classic in Masonic literature - an exposition of the early history and symbolism of Freemasonry – from the foundations upwards.