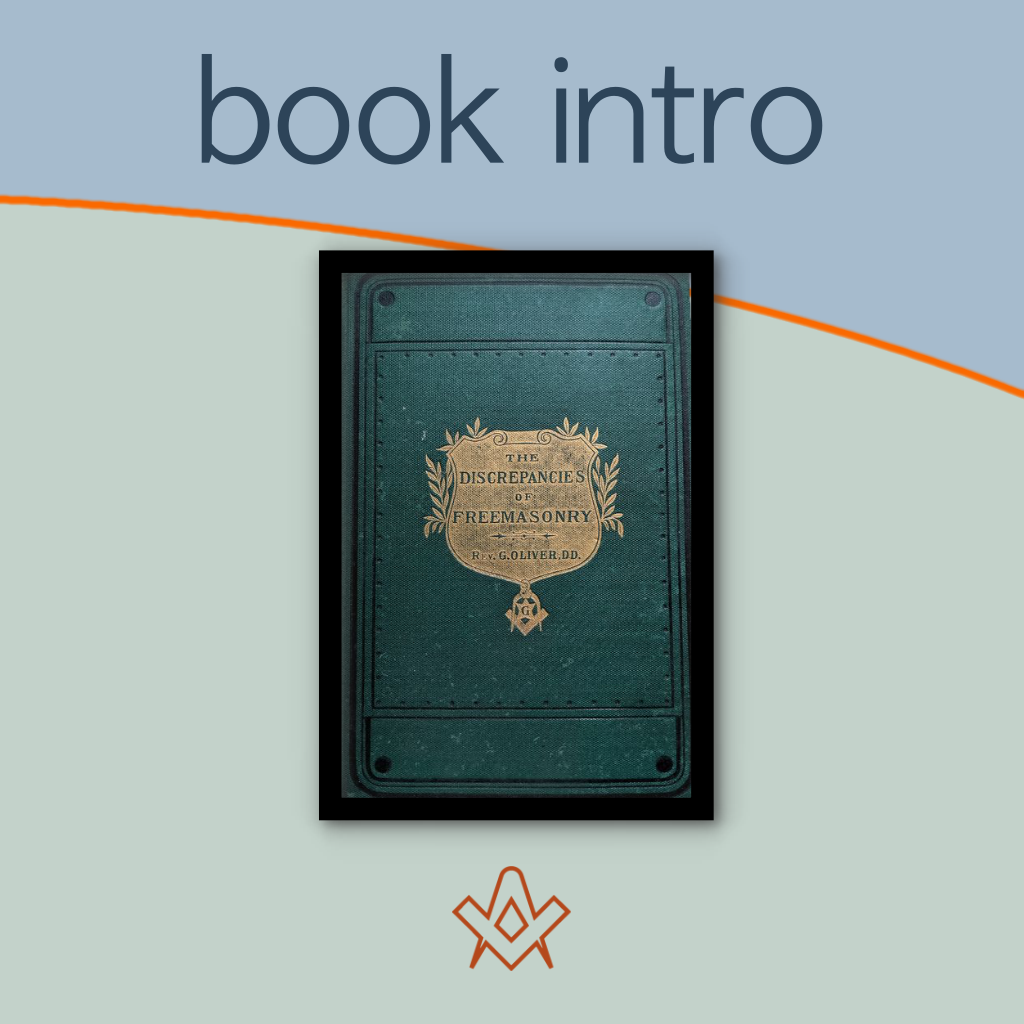 The Discrepancies of Freemasonry 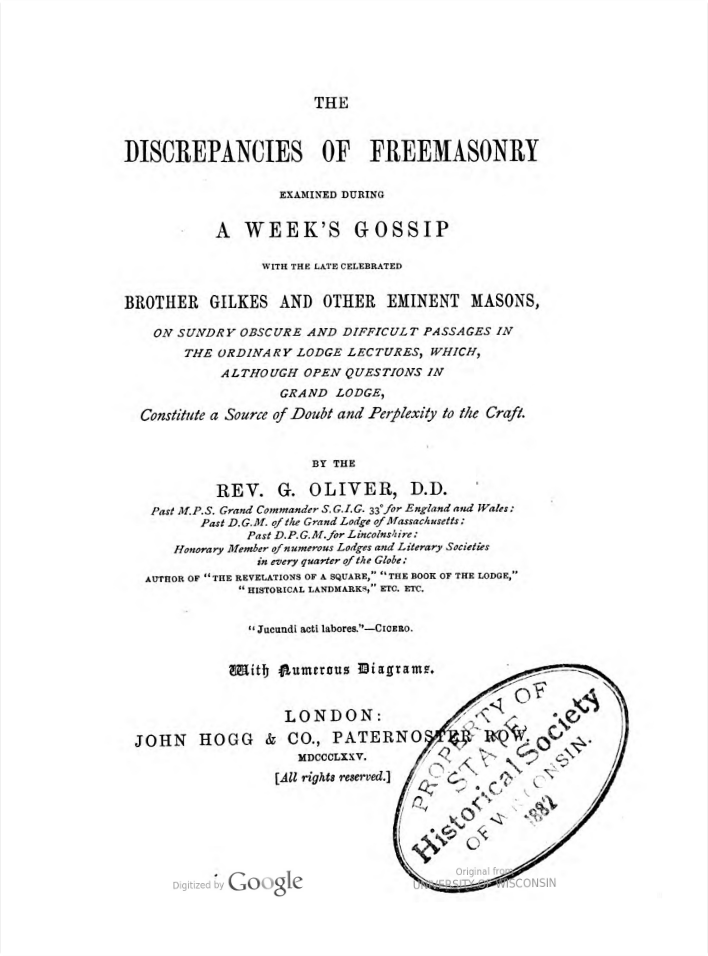 An extract from the (very lengthy) introduction: 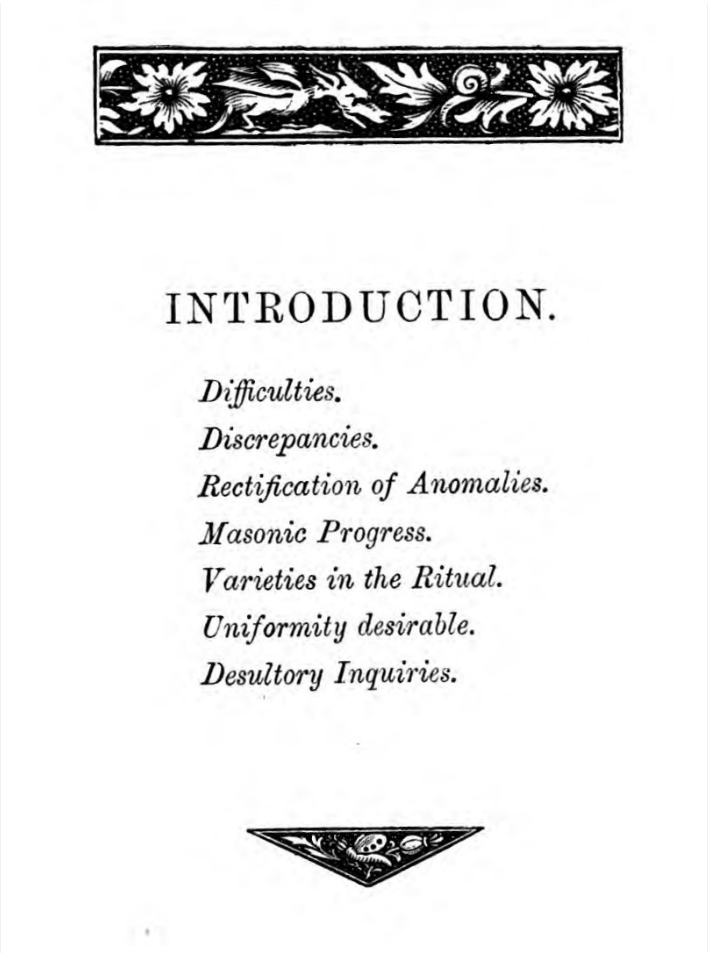 An inspired Apostle, 1800 years ago, predicated that “the body is not one member, if the foot shall say, Because I am not the hand, I am not of the body; is it therefore not of the body?

If the whole body were an eye, where were the hearing?

If the whole were hearing, where were the smelling?

But now hath God set the members every one of them in the body, as it hath pleased Him.

And if they were all one member, where were the body? But now are they many members, yet but one body.

In like manner, if every person were possessed of the same taste, or rather a taste for the same pursuits, the world would be insufferably dull, and life a very insignificant affair.

If all men were fond of chemistry, or music, or Freemasonry, or topography, or boating, or antiquities, or any other kindred metaphysical or practical study, what would become of agriculture, trade, commerce, or the mechanical arts by which our worldly wants are supplied?

And, on the other hand, if mechanics or any handicraft employment formed the universal bent of human predilections, the ideas of mankind would be chained to the earth and have no scope for those intellectual meditations which are afforded by the refinements of science.

We all ride our respective hobbies; and so long as we do not cross and jostle each other but pursue our course with a steady and sober pace, society will be benefited by the arrangement.

The learned chemist must not turn up his nose at the eloquent preacher, nor the political economist despise the more humble Freemason, because each and all are fulfilling their peculiar destination, and working out, by a simultaneous movement, those beneficent purposes which the Author of all good has designed for the universal benefit of His creatures.

You are an enthusiast in Freemasonry,’ said a friend. It is admitted; and what then?

Faraday as an enthusiast in chemistry, Tennyson in poetry, Napier in war, and Palmerston in statecraft; would any one of these censure me for puerility, or would they allow me to ride my hobby in peace?

Which of them would cast the first stone?

I do not condemn my friend the agriculturist, after he has failed thrice on as many good farms, for becoming a theorist and instructing others to do what he has signally proved him- self incapable of effecting in his own person; because every practical farmer will judge for himself and will scarcely be prevailed on to follow the directions of such a teacher, if they differ widely from the results of his own experience.

I do not condemn the politician for fixing his eye with & steady and undeviating gaze on the sweets of office, because his enthusiasm cannot fail to redound to the good of his country in some shape or other.

Let all those, therefore, who consider Freemasonry a trivial and frivolous pursuit, apply the same rule to me, and I ask no more; for I consider it to be a science as well entitled to the application of a leisure hour, as many others which are honoured by the world with a more exalted estimation.

One cogent reason why Freemasonry is so little known amongst mankind, consists in the difficulty of entering on a full and explicit explanation of those portions of the system which expediency requires should be kept secret.

It is founded on leges non scriptæ, and its most arcane divisions are necessarily transmitted orally.

Our brethren of the last century entertained such a nervous dread of any improper exposure, that successive Grand Lodges prohibited, as far as their power would justify, the publication of any works on the subject, and assigned this reason for the policy:

“That considering the flourishing state of our Lodges, where regular instruction and suitable exercises are ever ready for all brethren who zealously aspire to improve in Masonical knowledge, new publications are unnecessary on subject which books cannot teach.

Indeed, the temptations to authorship have effected a strange revolution of sentiments since the year 1720, when even ancient manuscripts were destroyed, to prevent their appearance in a printed Book of Constitutions for the principal materials in this very work, then so much dreaded, have since been retailed in a variety of forms, to give consequence to fanciful productions that might have been safely withheld, without sensible injury either to the fraternity, or to the literary reputation of writers.”

This prohibition has, however, been wisely removed, and both the late and present Grand Masters have given the high sanction of their names to publications on Masonry which have effected a wonderful reformation in the Order, and conferred upon it a new and more estimable position in the opinion of mankind.

Numerous misconceptions have been removed, objections refuted, popular errors exploded; and a gentleman may now avow himself to be a Mason, without being subjected to the sarcastic censure of his enemies, or the ridicule of his friends.

Still, the explanation of Freemasonry, as a perfect science, is difficult of execution, from the bar which is imposed on the conscience of every initiated person.

Some things necessarily appear dark and uncertain, because of the noli me tangere which is placed upon them.

The terms which I enlighten the Craft are unintelligible to the cowan.

The world cannot understand a proposition which may be familiar to the fraternity.

And yet, even the latter, unless they have devoted their time and attention to the subject, will frequently find themselves wanting when certain truths are propounded that the accomplished Mason easily comprehends.

It is true there are many intricate passages in the system of Freemasonry that are calculated to embarrass the most zealous and indefatigable student, and to deter a superficial reasoner from pursuing an investigation which abounds with difficulties that appear to be insuperable.

Many of these stumbling-blocks, however, are only imaginary, and arise from the common error of mistaking the ideal for the real.

Freemasonry is avowedly a symbolical institution ; and it requires a tolerably correct insight into its nature and properties, and an intimate acquaintance with its arcane machinery, to enable any one to determine the true interpretation of its mysterious facts and doctrines, and to distinguish what is simply intended to be an emblem or type of some hidden and sublime mystery, from that which is to be accepted as the literal and grammatical meaning of the words in which the fact or doctrine is clothed.

It will not appear to be a very high recommendation of Masonry, when we admit that the most eminent and learned Brothers differ toto colo on the interpretation of some of our most recondite propositions.

But this does not in reality impugn the integrity of the general system, or detract, in the slightest degree, from its utility or excellence; because, if the validity of such an argument were admitted, the truth of our most holy religion might also, on the same principles, be called in question; for no differences of opinion on Masonic subjects are at all comparable to those which exist respecting the terms and conditions of salvation, although they are all founded on a Gospel that contains the pure and unadulterated fountain of truth.

The exception confirms the rule. Freemasonry, according to the definition promulgated amongst the Craft by the authority and under the sanction of our present Grand Lodge, is “a beautiful system of morality, veiled in allegory, and illustrated by symbols“.

Now these very terms exemplify the nature of the institution, and rationally account for the diversity of opinions which exist amongst the Craft; serving at the same time to excite the energies and stimulate the curiosity of those brethren who possess sufficient perseverance to trace with patient assiduity effects to their causes; and to investigate truths which are veiled in allegory, by applying the only key which is capable of illustrating them, viz., the interpretation of symbols.

No institution can be essentially damaged by any differences of opinion that may exist amongst its members; because they do not usually originate so much from a defect in the constitution of the society, as from the imperfection of the human mind.

The friends of Job intended to give him consolation under his infirmities and privations, but they failed for this very reason, that they viewed his afflictions through a false medium, and consequently entertained an opinion on the cause of his sufferings which was hostile to the truth.

Thus, being led astray, their intended words of comfort became a reproach; and they sinned against God while they firmly believed they were magnifying His perfections.

So feeble is the mind of man when attempting to grasp the dispensations of the Most High!

The system of Freemasonry undoubtedly contains anomalies, difficulties, and inaccuracies, which appear to be insurmountable; and some of the discrepancies have been repeated and dilated on with such pertinacity for a series of years, that great multitudes of the fraternity believe them to be indubitable facts; and are ready to gird up their loins in their defence, whenever they find a brother bold enough to question their integrity.

Some of these antiquated senilities are absurd, and others are not only antagonistic to the truth, but absolutely irreconcilable with it.

This argument is not urged for the purpose of extenuating any peculiar imperfection in the Craft, because no human institution is without its defects; but to evince what inconsistences the mind of man may be induced to embrace by reiterations frequently repeated ex cathedrâ, and never by any chance impugned; as a continual dropping of water will penetrate the hardest marble…

George Oliver, D.D. (1782–1867) was an English cleric, schoolmaster, topographer, and writer on Freemasonry.