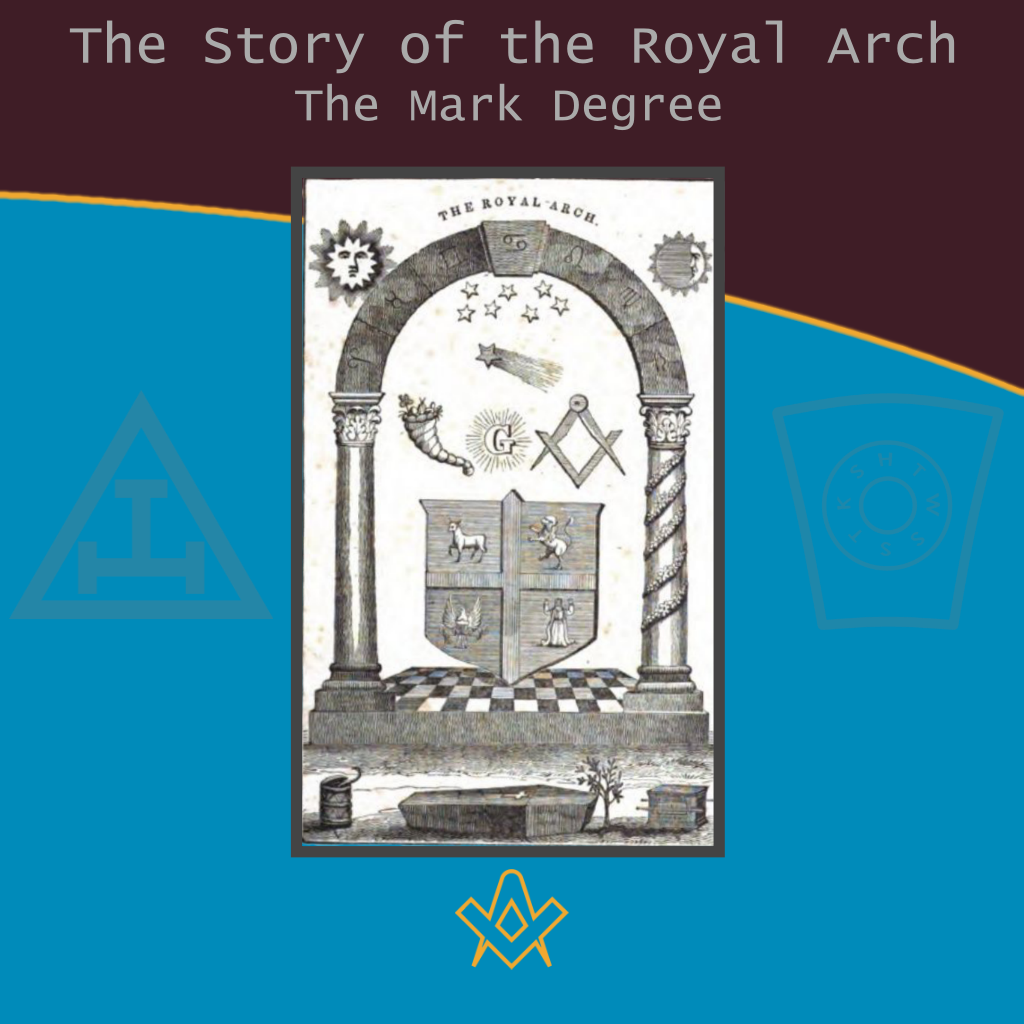 The one link that connects the Mark Degree with that of the Royal Arch is the Keystone.

The whole of the Degree is built upon the cutting, the rejection, and the recovery of this particular piece of masonry at the time of the building of King Solomon’s Temple.

The Keystone was intended for the arch of the Sacred Vault , and almost five hundred years later when the Captives returned from Babylon to Jerusalem, the Sacred Vault  yielded up its treasures for the good of humanity.

It is therefore at the Sacred Vault  that the two Degrees find their common meeting point, and it may be that that is the reason why the logical Scot insists on regarding the Mark as pertaining to the ceremonial of the Royal Arch.

Officers of a Mark Lodge

The following are the recognised officers in a Lodge of Mark Masters: —

Those who would be admitted to the Mark Degree must have been regularly entered Apprentices, passed Fellow-Crafts, and raised to the High and Sublime Degree of Master Masons.

They must be able to demonstrate their rank as masons when called upon, and they must be ready to reaffirm their faith in God, and to take upon themselves a further obligation to maintain secrecy with regard to all grips, signs and tokens.

Having expressed his desire to be advanced to the Degree of Mark Master Mason, and having been admitted within the door of the Lodge, the Master Mason is received on the edge of the Chisel an instrument that morally demonstrates the advantages of discipline and education by which means alone he may become a fit member of regularly organised society.

The Benefit of Prayer

As in all the earlier Degrees the blessing of Heaven is invoked.

‘Almighty God, G. and G.O. of the U., we humbly beseech Thy blessing upon this assembly gathered together in Thy name.

Do Thou especially bless him who now kneels before Thee.

Grant that he may so regulate his daily life that when, at the close of his earthly labours, he comes before Thee, he may be found worthy to receive the mark of Thy approval, and become a perfect stone in that immortal Temple not made with hands, eternal in the Heavens.’

To Prove His Right

Fortified thus by prayer, the postulant is addressed by the Mark Master who explains to him that since the building of K S’s T and the institution of the Degree of Mark Master Mason as now practised, a regulation has been made among the Craft that no one shall be advanced to the rank he now desires unless previously raised to the sublime degree of Master Mason, and he thereupon requests the postulant to demonstrate to the brethren assembled that he has passed through the earlier degrees.

How to choose a Mark

Having satisfied the brethren that he is qualified to receive the Degree, the Mason is next taught how to select his Mark which, once selected and recorded in the Mark Book of the Lodge, cannot thereafter be changed.

He is also taught the manner in which to apply for his wages; and thereafter, kneeling at the altar, in the manner sanctioned by long usage, repeats the…Obligation.

The Badge of a Mark Mason

Having been obligated and instructed in the secrets of the Degree the brother is invested with the badge and distinguishing jewel of a Mark Master Mason to signify his advancement in the science.

The jewel is a model of the stone which the builders rejected, the Keystone of the Arch of the Sacred Vault of King Solomon’s Temple.

The badge not only points out the brother’s rank as a Mark Master Mason, but is meant to remind him that whether he may m……, w…… or i……, his words and actions are observed and recorded by T.G.O.O.T.U, to Whom he must give an account of his conduct through life, and Who will reward or punish according as the brother has observed or disregarded His divine command.

As a rule the Mark worn by Freemasons all over the world as an indication of their rank in the fraternity assumes the form of a Mark Master’s Keystone. It is made generally of pebble, sometimes of mother-of-pearl, occasionally of gold or silver.

The Mark should, in addition to the cryptic letters and equilateral triangle, contain the device adopted by the wearer, which device is really the person’s own mark chosen by himself, recorded in the mark book of his Lodge and not thereafter capable of being changed for any other device.

That model Keystone is a peculiar pledge of brotherhood and should a Mason in distress present such a badge to another Mason it is the duty of the latter to render such assistance as is within his power. 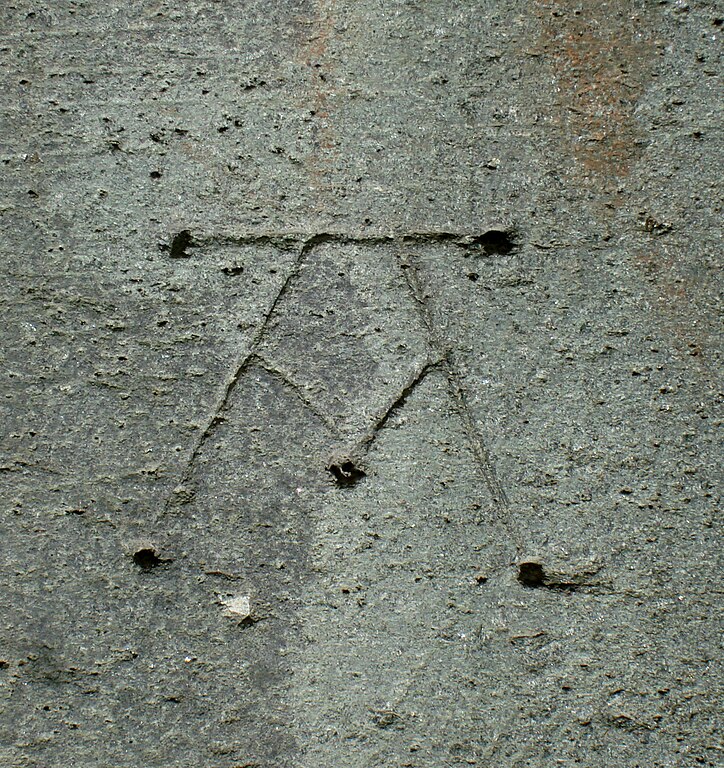 The subject of Masons’ Marks has given rise to much controversy.

Devices are to be found in all old buildings, often in great abundance.

It is not clear what their original purpose was, but there is a belief that they formed a sort of language understood by early operatives and were thus a means of communication.

Mr George Godwin, the eminent architect, though a non-mason, took great interest in the subject, and was one of the first to point out that marks were to be found on all important buildings of ecclesiastical or national importance.

He contributed a paper to the Transactions of the London Society of Antiquaries, and there he states that, in his opinion, ‘these marks, if collected, and compared, might assist in connecting the various bands of operatives, who, under the protection of the church — mystically united — spread themselves over Europe during the Middle Ages, and are known as Freemasons’. 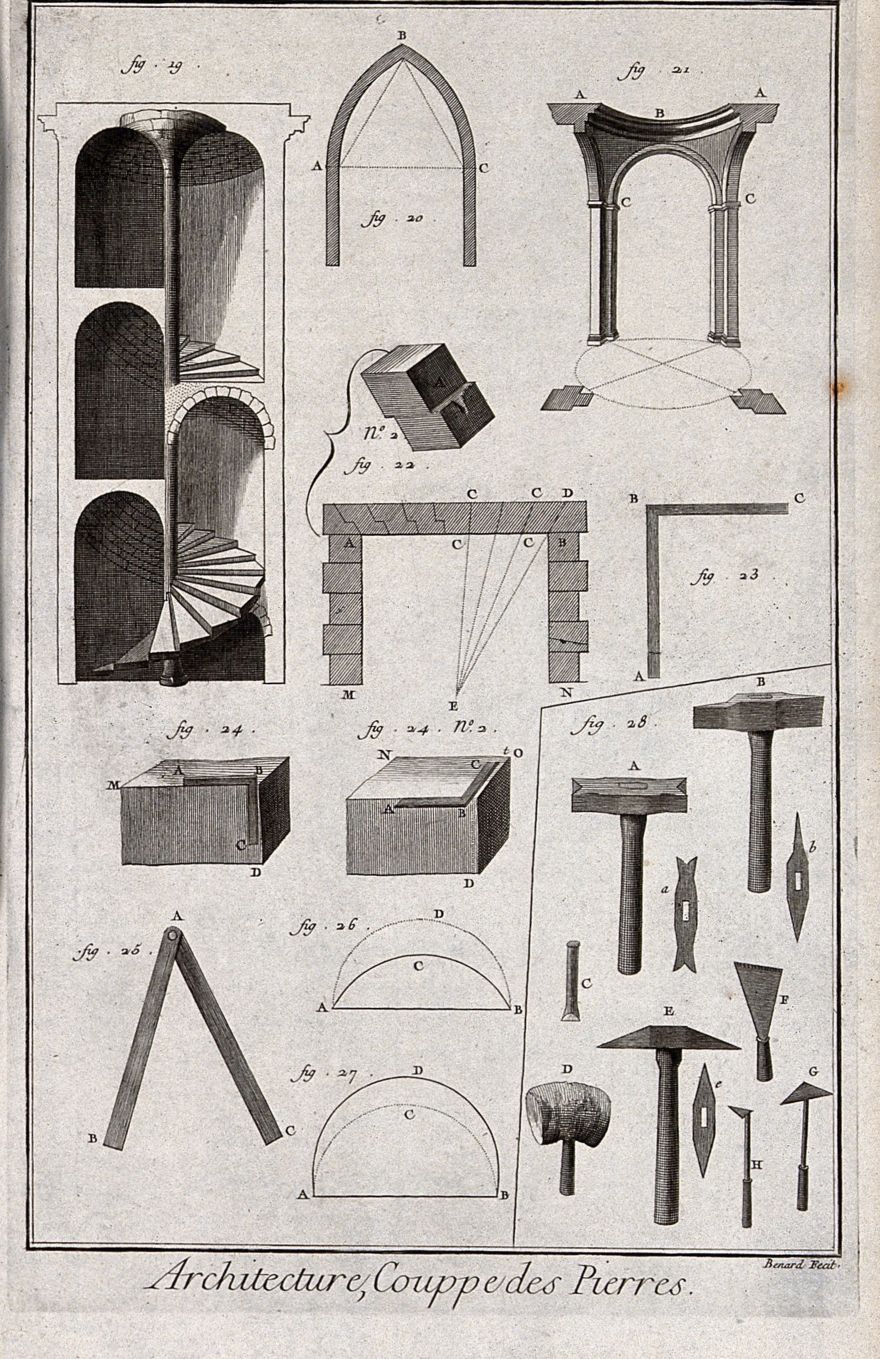 Architecture: an assortment of masons tools, blocks of stone, and a folding rule. Engraving by Benard [after Lucotte?]. 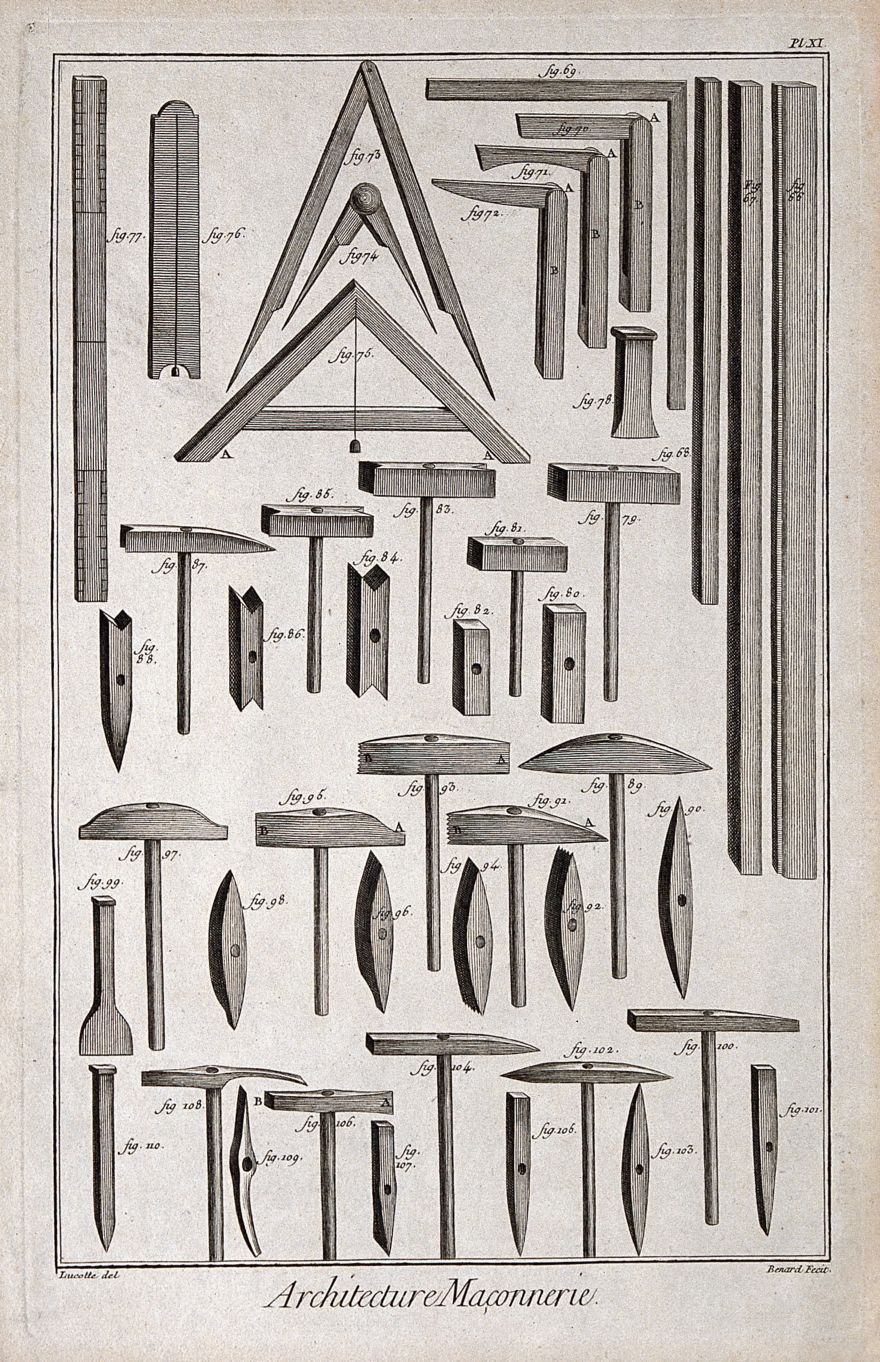 The working tools of a Mark Master Mason are the Mallet and the Chisel. Every brother in passing through the E A and F C Degrees has been made familiar with their uses.

They are further employed by the Mark Master Mason to cut his mark of approval and thus to indicate that the finished stone is fitted for its place in the intended structure.

But by the brother who is not an operative but a member of the Free and Accepted or Speculative Masonic Body the tools are applied in a moral sense and thus become instruments of wise instruction.

The Chisel morally demonstrates the advantages of discipline.

The mind, like the diamond in its original state, is rude and unpolished; but as the effect of the chisel on the external coat soon brings to view the inner beauties of the gem, so education discovers the latent virtues of the mind, and draws them forth to range the wide field of matter and space, and to display the summit of human knowledge — our duty to God and man.

The Mallet morally teaches the thoughtful Freemason to correct irregularities, and reduce man to a proper level, so that by quiet deportment in the school of discipline, he may learn to be content.

What the Mallet is to the workman, enlightened reason is to the passions; it curbs ambition, represses envy, moderates anger, and encourages good dispositions, whence arises among good Masons that comely order which nothing earthly gives nor can destroy.

The soul’s calm sunshine, and the heart-felt joy.

By being reminded of the moral advantages of discipline and education the Freemason is, or should be, led to entertain a firm but humble hope that, by the correction of irregularities and the subjugation of passions, he may be found worthy to receive the approving mark of T.G.O.O.T.U., as fitted to form part of that spiritual edifice, ‘that house not made with hands, eternal in the heavens’. 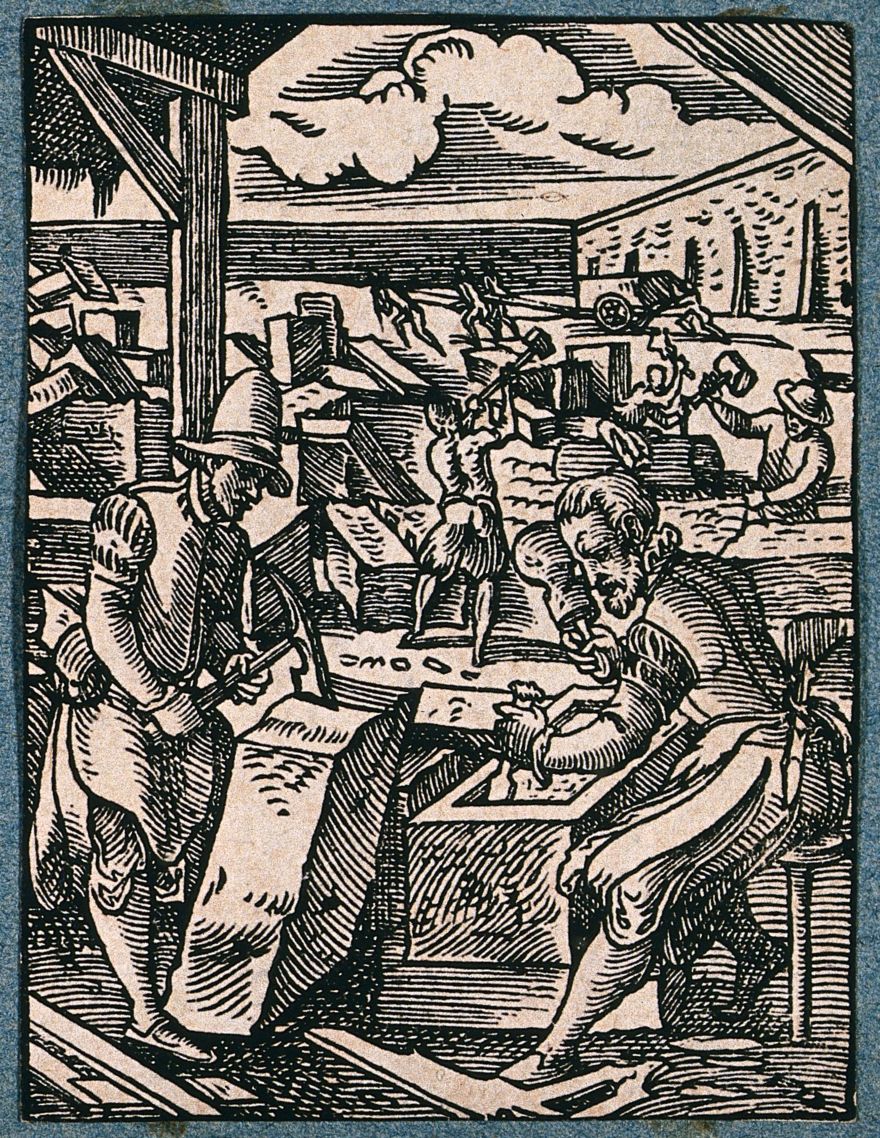 THE STORY OF THE ROYAL ARCH

Harvey was installed as Provincial Grand Master of Forfarshire on the 23rd January 1935. Born in Stirling in 1874

He was trained as a law clerk but moved from law to journalism and joined John Leng & Co, Ltd, Dundee.

He was appointed general editor of the firms extensive series of novels. In 1904 he joined the staff of the 'Peoples Journal' and became assistant editor.

From 1908 to 1912 he was literary editor of the 'Dundee Advertiser'. He was a prolific writer of Masonic articles and books - his 'Harvey Manual of Degrees' is frequently used within the Lodges of Forfarshire.

He also published a number of small booklets on various Masonic topics. He was at Glamis when H.R.H. The Duke of York (the future King George VI) became an affiliate member of the Lodge of Glamis No. 99 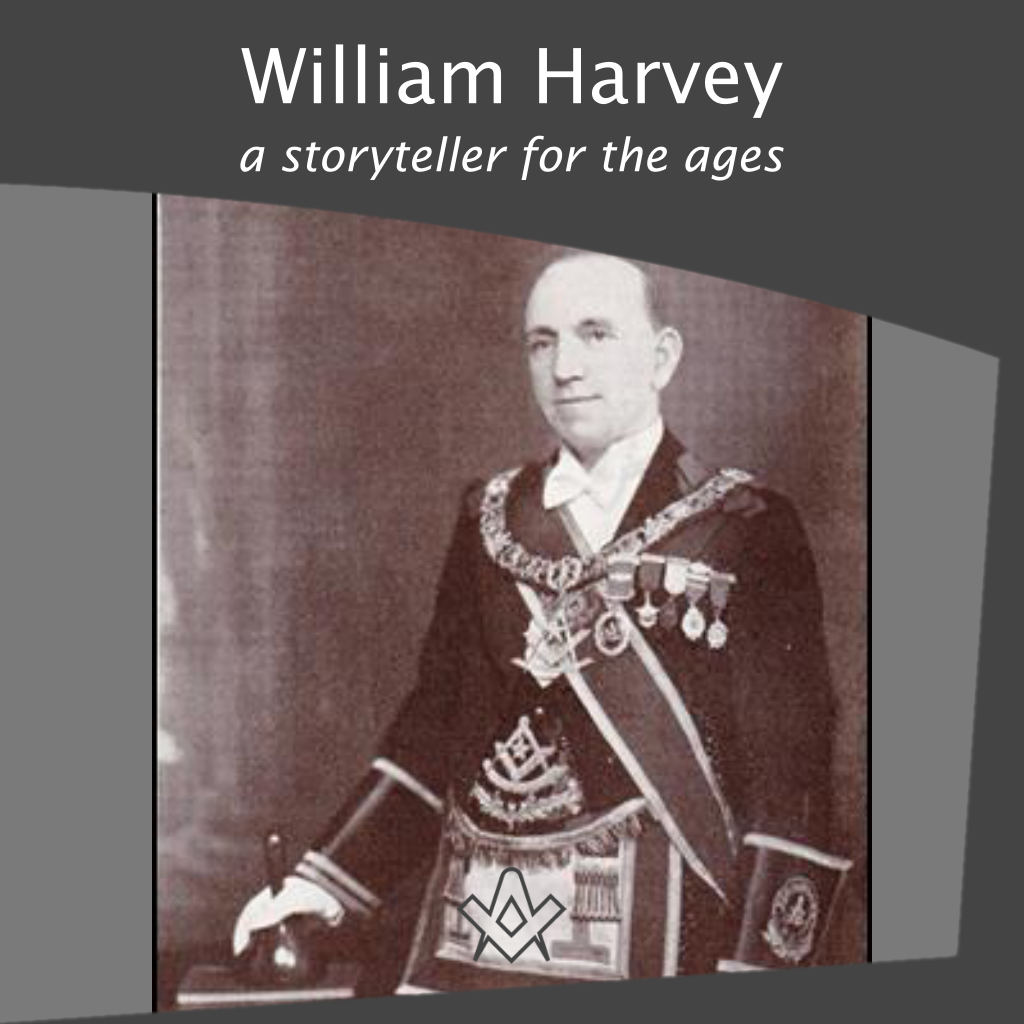 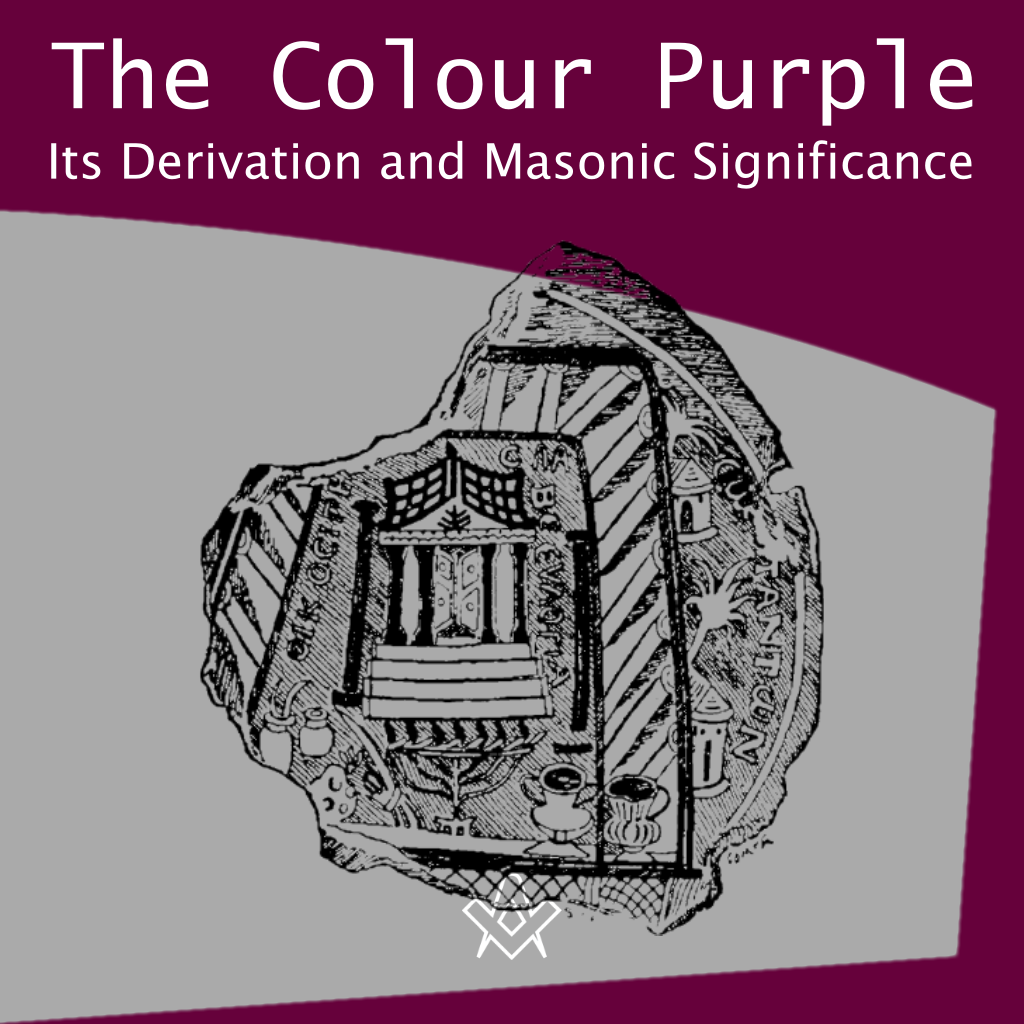 The Colour Purple – Its Derivation and Masonic Significance

What is the colour purple with regards to Freemasonry? The colour is certainly significant within the Royal Arch series of degrees being emblematical of Union.  …read more 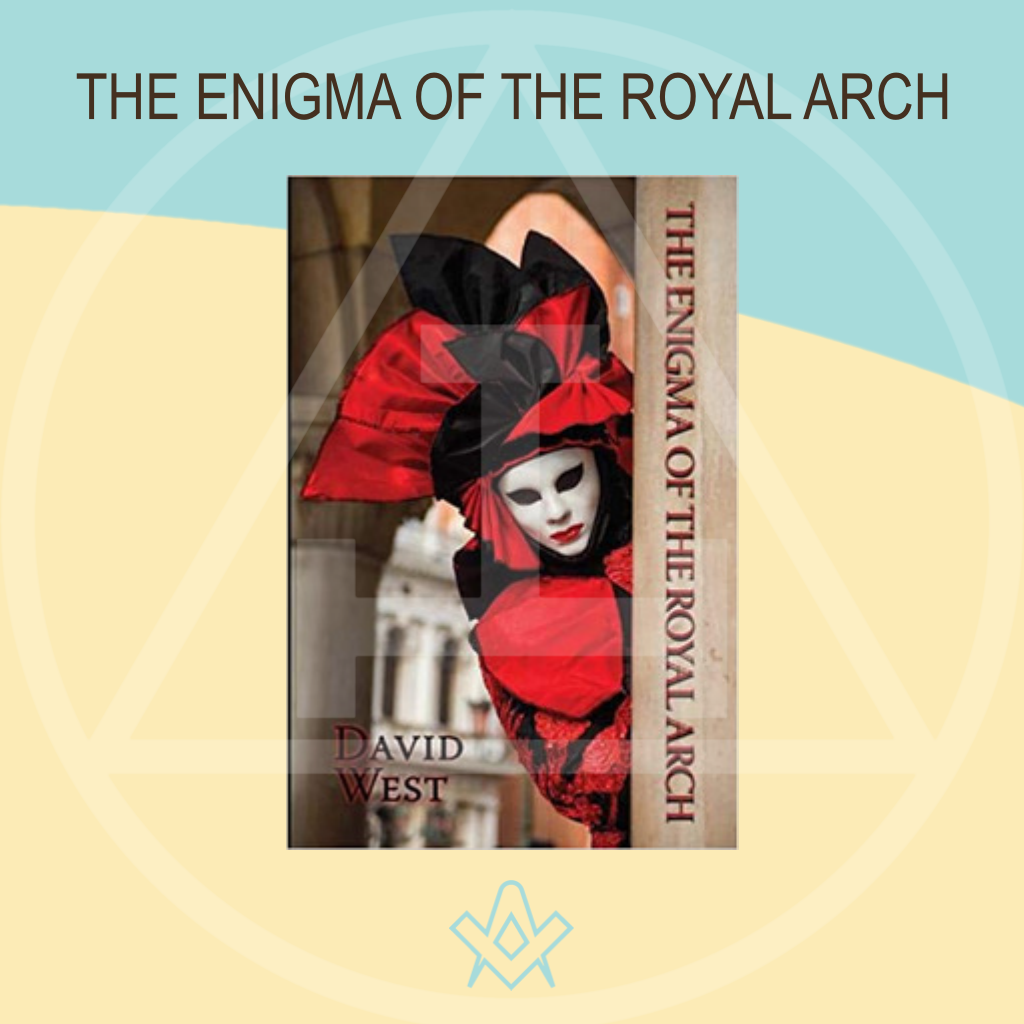 The Enigma of the Royal Arch

Holy Royal Arch What’s it all about  …read more 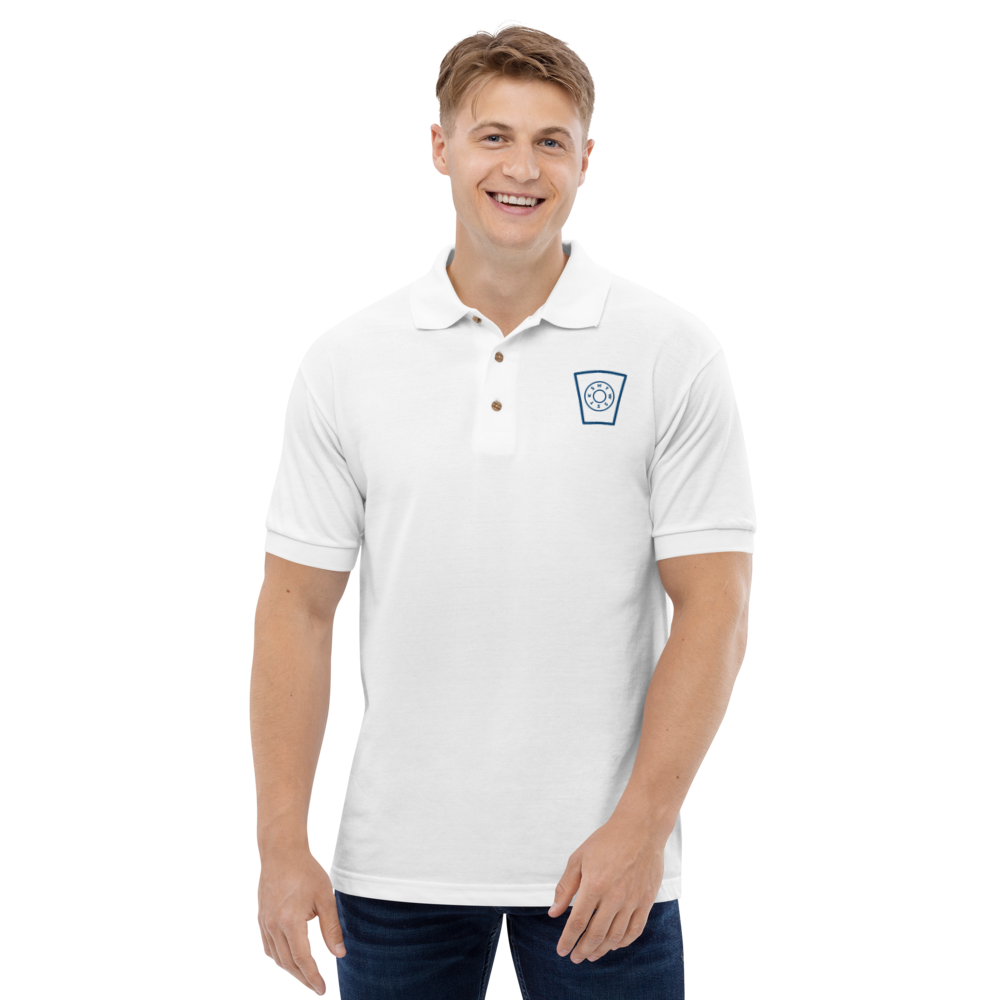