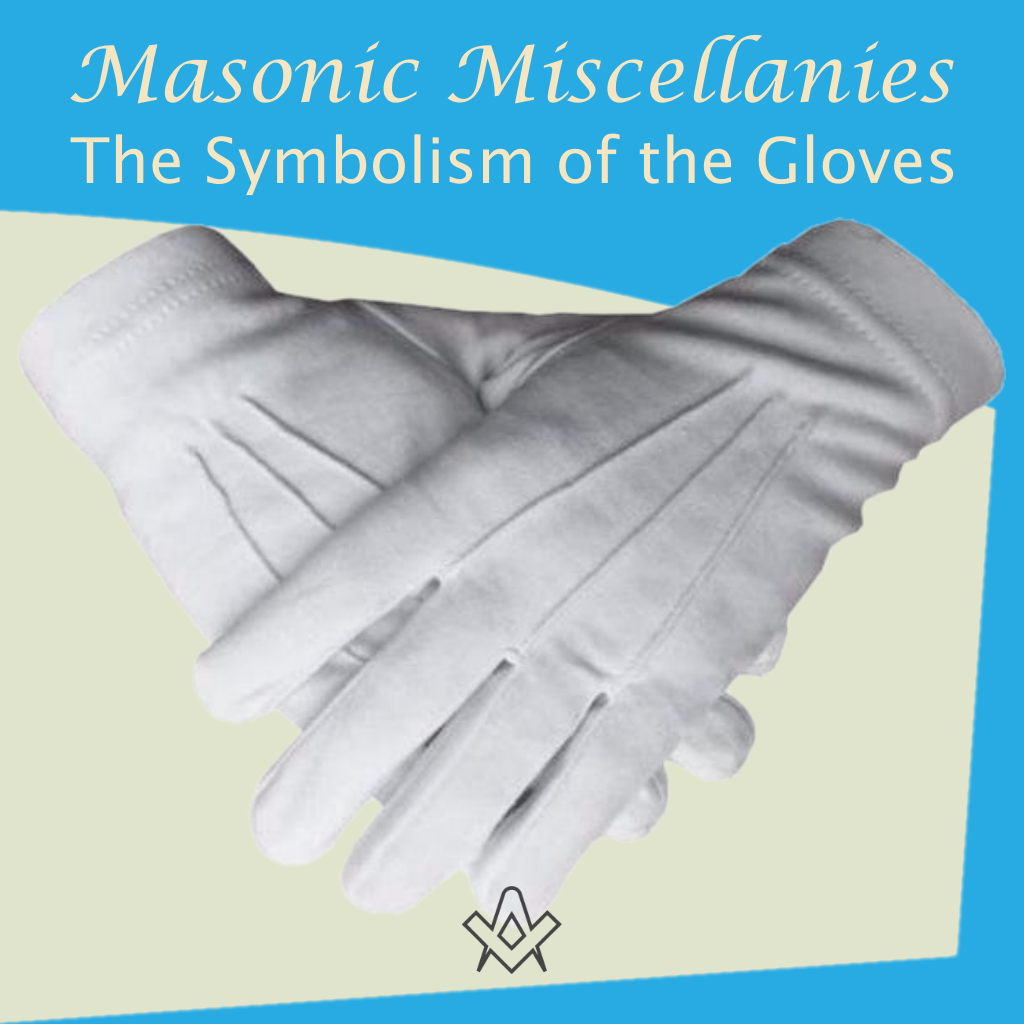 The Symbolism of the Gloves

In the continental rites of Masonry, as practised in France, in Germany, and in other countries of Europe, it is an invariable custom to present the newly-initiated candidate not only, as we do, with a white leather apron, but also with two pairs of white kid gloves, one a man’s pair for himself, and the other a woman’s, to be presented by him in turn to his wife or his betrothed, according to the custom of the German masons, or, according to the French, to the female whom he most esteems, which, indeed, amounts, or should amount, to the same thing.

There is in this, of course, as there is in everything else which pertains to Freemasonry, a symbolism. The gloves given to the candidate for himself are intended to teach him that the acts of a mason should be as pure and spotless as the gloves now given to him. In the German lodges, the word used for acts is of course handlungen, or handlings, “the works of his hands,” which makes the symbolic idea more impressive. 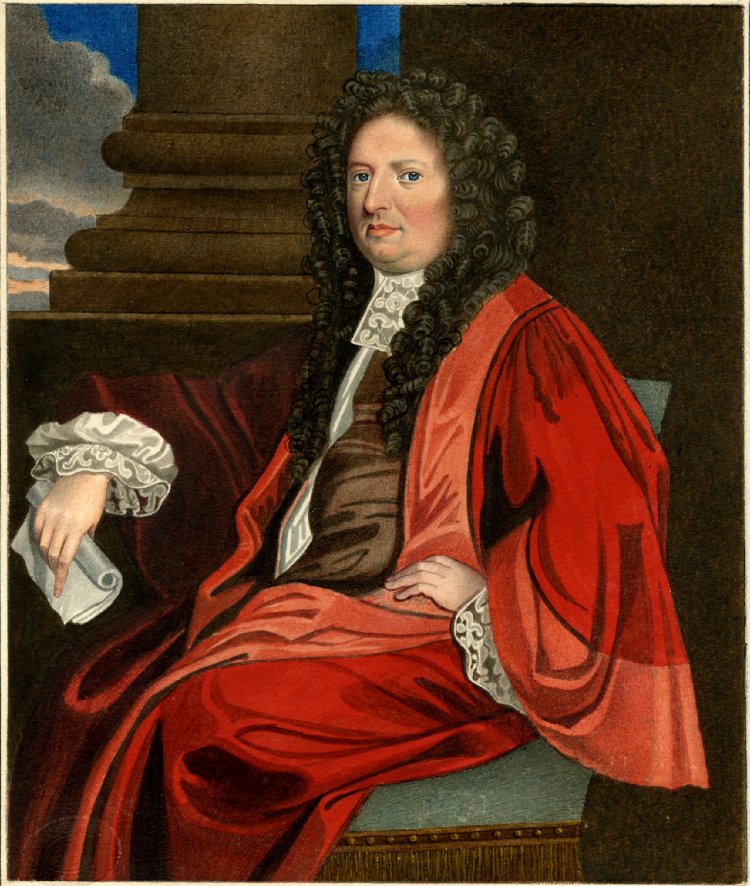 Robert Plot (1640 – 1696) was an English naturalist, first Professor of Chemistry at the University of Oxford, and the first keeper of the Ashmolean Museum.

Dr. Robert Plot—no friend of Masonry, but still an historian of much research—says, in his “Natural History of Staffordshire,” that the Society of Freemasons, in his time (and he wrote in 1660), presented their candidates with gloves for themselves and their wives.

This shows that the custom still preserved on the continent of Europe was formerly practised in England, although there as well as in America, it is discontinued, which is, perhaps, to be regretted.

But although the presentation of the gloves to the candidate is no longer* practised as a ceremony in England or America, yet the use of them as a part of the proper professional clothing of a mason in the duties of the lodge, or in processions, is still retained, and in many well-regulated lodges the members are almost as regularly clothed in their white gloves as in their white aprons.

The symbolism of the gloves, it will be admitted, is, in fact, but a modification of that of the apron.

They both signify the same thing; both are allusive to a purification of life. “Who shall ascend”, says the Psalmist, “into the hill of the Lord? or who shall stand in his holy place? He that hath clean hands and a pure heart”.

The apron may be said to refer to the “pure heart”, the gloves to the “clean hands”. Both are significant of purification—of that purification which was always symbolized by the ablution which preceded the ancient initiations into the sacred Mysteries.

But while our American and English masons have adhered only to the apron, and rejected the gloves as a Masonic symbol, the latter appear to be far more important in symbolic science, because the allusions to pure or clean hands are abundant in all the ancient writers.

“Hands”, says Wemyss, in his “Clavis Symbolica”, “are the symbols of human actions; pure hands are pure actions; unjust hands are deeds of injustice”.

There are numerous references in sacred and profane writers to this symbolism. The washing of the hands has the outward sign of an internal purification.

Hence the Psalmist says, “I will wash my hands in innocence, and I will encompass thine altar, Jehovah”.

In the ancient Mysteries the washing of the hands was always an introductory ceremony to the initiation, and, of course, it was used symbolically to indicate the necessity of purity from crime as a qualification of those who sought admission into the sacred rites; and hence on a temple in the Island of Crete this inscription was placed: “Cleanse your feet, wash your hands, and then enter.”

Indeed, the washing of hands, as symbolic of purity, was among the ancients a peculiarly religious rite. No one dared to pray to the gods until he had cleansed his hands.

“Χερσὶ δ’ ἀνίπτοισιν Διῒλείβειν Ἃζομαι.”—Iliad, vi. 266.
“I dread with unwashed hands to bring
My incensed wine to Jove an offering.”

In a similar spirit of religion, Æneas, when leaving burning Troy, refuses to enter the temple of Ceres until his hands, polluted by recent strife, had been washed in the living stream.

“Me bello e tanto digressum et cæde recenti,
Attrectare nefas, donec me flumine vivo
Abluero.”—Æn. ii. 718.
“In me, now fresh from war and recent strife,
‘Tis impious the sacred things to touch
Till in the living stream myself I bathe.”

The same practice prevailed among the Jews, and a striking instance of the symbolism is exhibited in that well-known action of Pilate, who, when the Jews clamored for Jesus, that they might crucify him, appeared before the people, and, having taken water, washed his hands, saying at the same time, “I am innocent of the blood of this just man. See ye to it.”

In the Christian church of the middle ages, gloves were always worn by bishops or priests when in the performance of ecclesiastical functions. 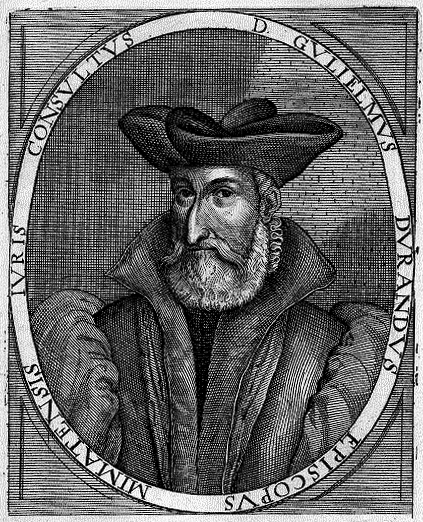 Guillaume Durand, or William Durand (c. 1230 – November 1, 1296), also known as Durandus, Duranti or Durantis, from the Italian form of Durandi filius, as he sometimes signed himself, was a French canonist and liturgical writer, and Bishop of Mende.

They were made of linen, and were white; and Durandus, a celebrated ritualist, says that “by the white gloves were denoted chastity and purity, because the hands were thus kept clean and free from all impurity”.

There is no necessity to extend examples any further. There is no doubt that the use of the gloves in Masonry is a symbolic idea borrowed from the ancient and universal language of symbolism, and was intended, like the apron, to denote the necessity of purity of life.

We have thus traced the gloves and the apron to the same symbolic source. Let us see if we cannot also derive them from the same historic origin.

The apron evidently owes its adoption in Freemasonry to the use of that necessary garment by the operative masons of the middle ages. It is one of the most positive evidences—indeed we may say, absolutely, the most tangible evidence—of the derivation of our speculative science from an operative art.

The builders, who associated in companies, who traversed Europe, and were engaged in the construction of palaces and cathedrals, have left to us, as their descendants, their name, their technical language, and that distinctive piece of clothing by which they protected their garments from the pollutions of their laborious employment. Did they also bequeath to us their gloves?

This is a question which some modern discoveries will at last enable us to solve.

Adolphe Napoléon Didron (1806–1867) was a French art historian and archaeologist. – n 1844, he originated the Annales archéologiques, a periodical devoted to his favorite subject, which he edited until his death.

A N. Didron in his “Annales Archeologiques”, presents us with an engraving, copied from the painted glass of a window in the cathedral of Chartres, in France.

The painting was executed in the thirteenth century, and represents a number of operative masons at work.

Three of them are adorned with laurel crowns. May not these be intended to represent the three officers of a lodge?

All of the Masons wear gloves. Didron remarks that in the old documents which he has examined, mention is often made of gloves which are intended to be presented to masons and stone-cutters.

In a subsequent number of the “Annales”, he gives the following three examples of this fact:—

In the year 1331, the Chatelan of Villaines, in Duemois, bought a considerable quantity of gloves, to be given to the workmen, in order, as it is said, “to shield their hands from the stone and lime”.

In October, 1383, as he learns from a document of that period, three dozen pairs of gloves were bought and distributed to the masons when they commenced the buildings at the Chartreuse of Dijon.

And, lastly, in 1486 or 1487, twenty-two pair of gloves were given to the masons and stone-cutters who were engaged in work at the city of Amiens.

It is thus evident that the builders—the operative masons—of the middle ages wore gloves to protect their hands from the effects of their work.

It is equally evident that the speculative masons have received from their operative predecessors the gloves as well as the apron, both of which, being used by the latter for practical uses, have been, in the spirit of symbolism, appropriated by the former to “a more noble and glorious purpose”.

*Ed Note: The presentation of the gloves to the candidate is still practised as a ceremony in England by some Lodges