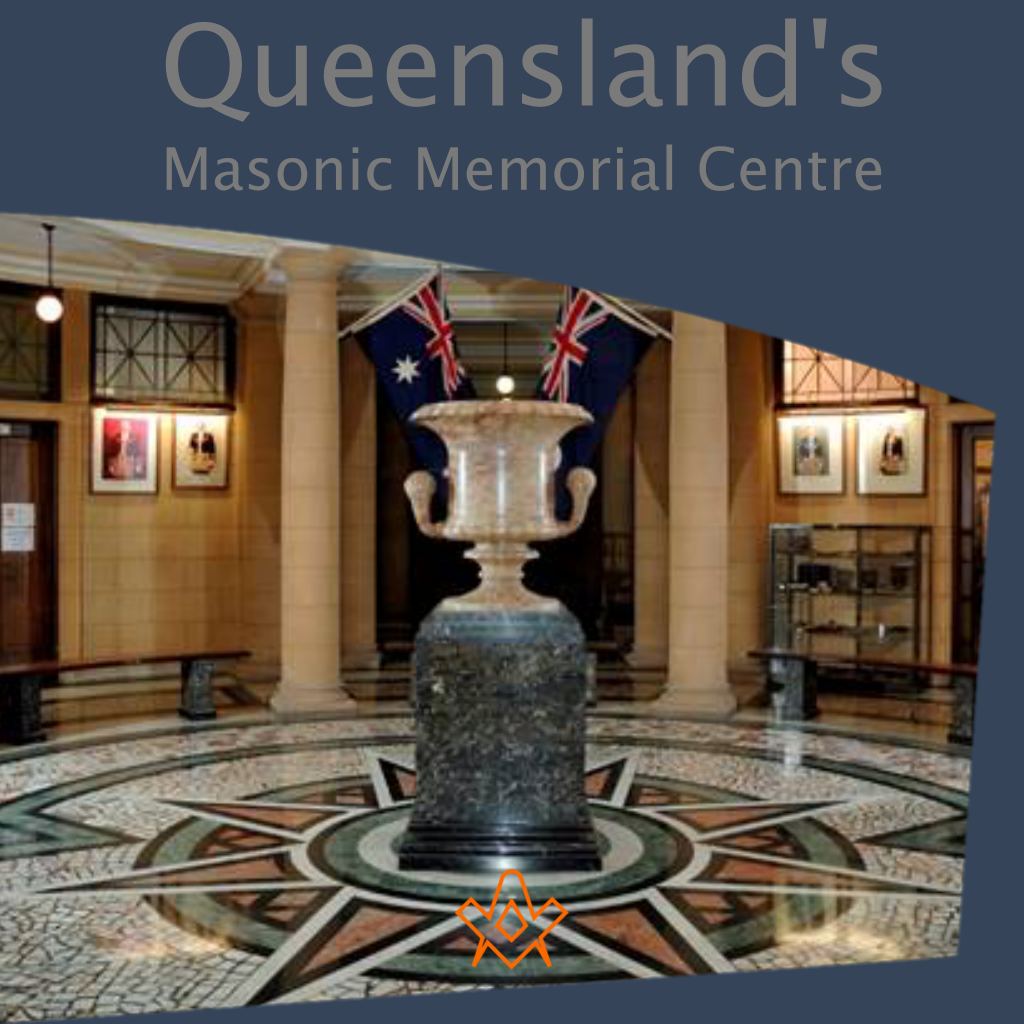 On 25 April each year ANZAC Day is commemorated in Australia and New Zealand.

Originally a day to honour the members of the Australian and New Zealand Army Corps (ANZAC) who served in the Gallipoli Campaign during the Great War (1914–1918).

It is now a national day of remembrance for all Australians and New Zealanders ‘who served and died in war and on operational service past and present’. 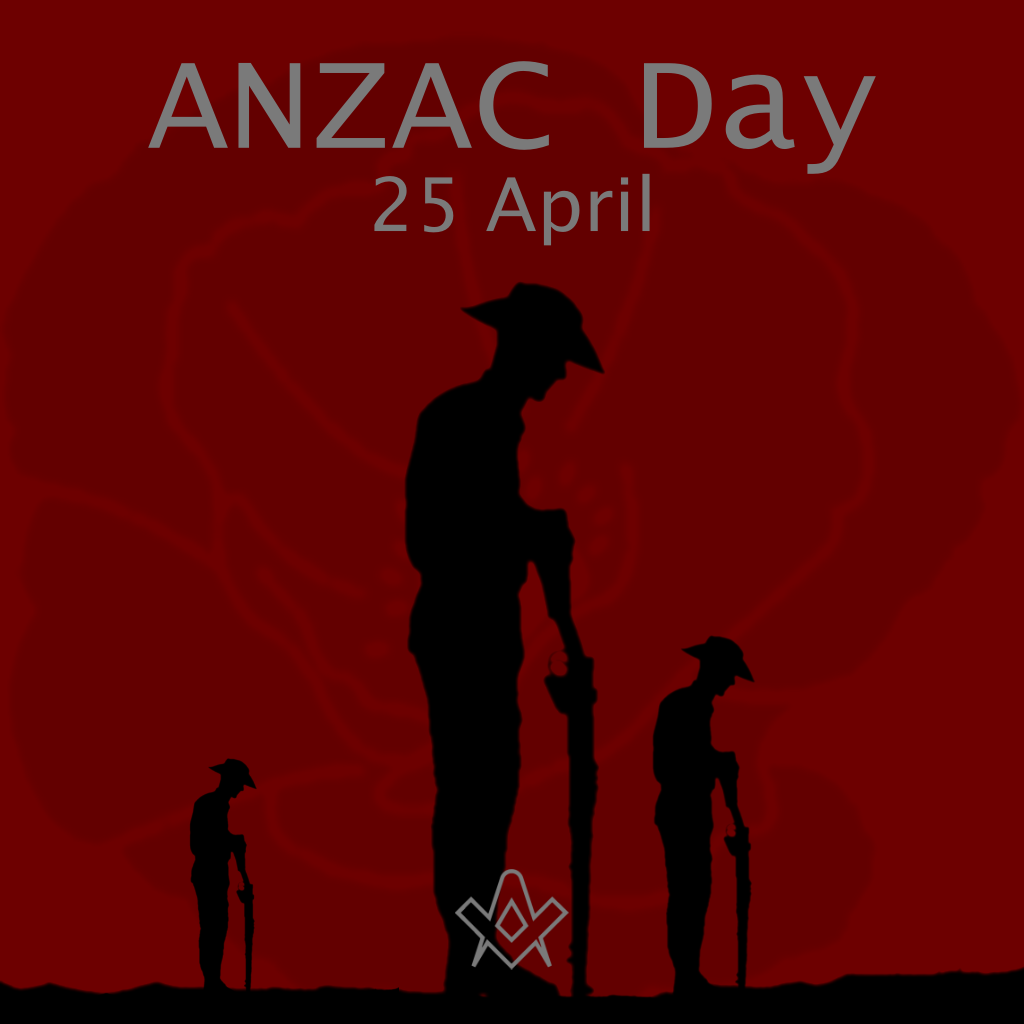 There are only two specifically dedicated Masonic Memorial buildings in the world – one is the ‘Permanent Memorial’ to the fallen at Freemasons’ Hall in London, the other is the Masonic Memorial Centre in Brisbane, Queensland.

The centenary of the end of the First World War may now have passed but these memorials serve to be a continuous reminder of those that have made the ultimate sacrifice, so we may live in peace. 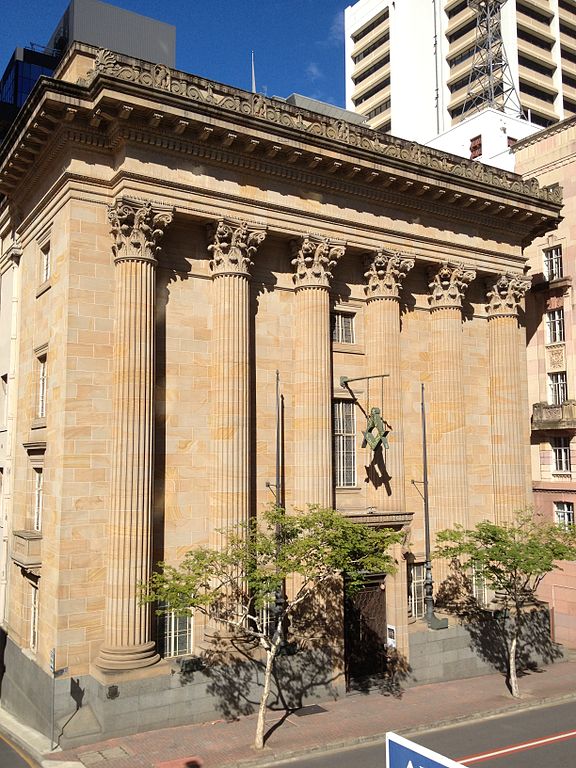 The Masonic Temple located at 311 Ann Street, in Brisbane was constructed between 1928 and 1930.

In June 1923, a competition was held to produce a design and by December 1924, of the 16 entries submitted, a design by Lange Leopold Powell was chosen.

Powell was a Freemason and a prominent architect in the partnership Atkinson, Powell and Conrad (now Conrad Gargett Architecture).

In April of 1921, the United Grand Lodge of Queensland (UGLQ) had been formed by the union of 281 lodges in Queensland and to commemorate this, land had been purchased with a view to construct a central temple. 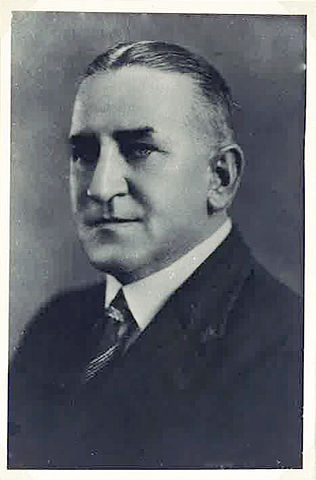 On 25 April 1928, the foundation stone was laid by the Most Worshipful Brother Justice Charles Stumm and a time capsule was placed beneath.

It contained copies of the four metropolitan newspapers bearing the day’s date, a copy of the Grand master’s speech and duplicate copies of the cheques which were contributions to the funding of the temple from lodges and brethren.

The date was significant being that of ANZAC Day, which is observed on 25 April each year, and was originally devised to honour the members of the Australian and New Zealand Army Corps (ANZAC) who served in the Gallipoli Campaign, their first engagement being in the Great War (1914–1918).

It is now a national day of remembrance for all Australians and New Zealanders ‘who served and died in war and on operational service past and present’.

The cost was deemed excessive by some, but the building was constructed to allow for three additional floors as needed.

The plan included a basement (for caretakers and a storeroom) a ground floor for the offices of the Grand Lodges of Queensland, a library and museum and a large central vestibule to house the Urn of Remembrance (see below).

The first floor was for supper rooms and the second, the lodge rooms. 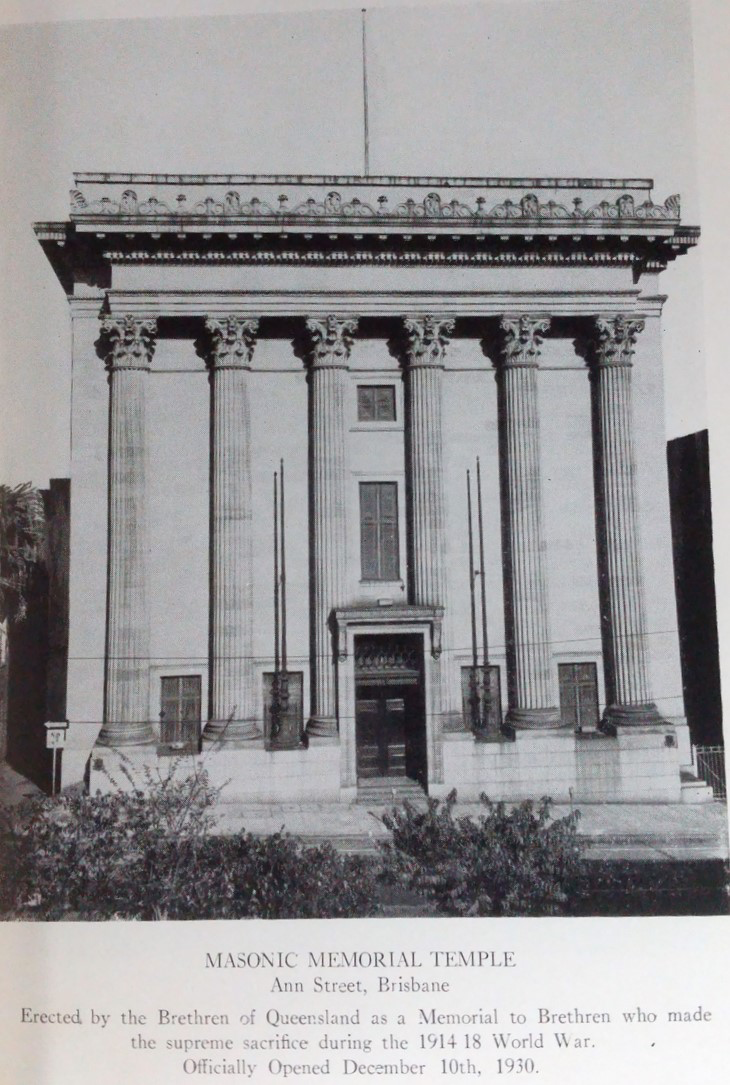 The Centennial Story, the History of Freemasonry in Queensland, Australia, 1959

The Brisbane Courier ran an article entitled ‘Inspiring Scene’ on 11 December 1930, describing the dedication of the new temple, stating that it was:

…duly dedicated in accordance with ancient usage, last night, in the presence of the largest gathering of Freemasons ever held in Queensland.

The beautiful and impressive ceremony, carried out with all due pomp and established ritual, created a lasting impression upon all who were privileged to participate.

The new temple contains four lodge rooms, in addition to the grand hall.

The addresses delivered by the respective consecrating officers were of an inspired and stimulating character, stressing the need for wholehearted service for the betterment of mankind…

The Courier went on to report that:

An enormous crowd had gathered outside the Temple, and it was fully an hour before all had gained admission and secured their reserved seats in the respective Lodge Rooms and the Great Hall.

It is estimated that no less than 1300 brethren attended the ceremony in the Grand Hall, whilst the four Lodge Rooms were taxed to their utmost capacity.

V.W. Bro. Lange l. Powell, F.R.I.B.A., architect of the new Masonic Temple, which was dedicated last night, said he had never been so impressed in his life as he had been with the ceremony of dedicating the memorial urn and with the consecration ceremony of the grand hall.

The quiet dignity and beauty of the ceremony must leave a lasting impression upon all the brethren.

While the Grand Master was conducting the consecrating ceremony in the Grand Hall, similar ceremonies were being conducted in each of the four other lodge rooms.

Most Worshipful Bro. A. Corrie, who conducted the dedication of lodge room No. 1, said that in the comparatively short period of three score years and ten, wholly within his own lifetime, Freemasonry in Queensland had expanded from one English lodge (now No. 1, U.G.L.Q.), with a membership of 12, to a roll of 351 lodges, with an active membership of 22,390 Freemasons, and, maybe, as many more brethren unattached, but changed from holding under the Grand Lodges of the United Kingdom, for whom the strongest filial affection still continued to self-government, as the United Grand Lodge of Queensland, under whose benign auspices and the excellent administration of the Grand Board of General Purposes, their magnificent Masonic Temple has been conceived, ably financed and strongly supported by the brethren in all the Orders of Freemasonry has now crystallised into ‘a majestic achievement’, of which Most Wor. the Grand Master, the Grand Lodge Officers, the Board of General Purposes, the architect, the builder, and all the brethren might justly be proud.

A final summing up of this momentous occasion was succinctly put by R.W. Bro. E. G. White, who, in his address to those in Lodge Room Four, said:

We have now dedicated this hall to Masonry, its principles, and all it stands for: To virtue, for what it means to ourselves and those dependent on us; to universal benevolence, by helping the afflicted or distressed; and to God’s service for the endowment of divine inheritance.

Therefore, from within these sacred walls may our Order flourish without, by the individual and collective force of precept and example.

Freemasonry calls for the best its adherents can give of unselfish service.

The day of recompense is to-morrow, when we shall feel and recognise the pleasure derived from having done something for the benefit of others. [1] 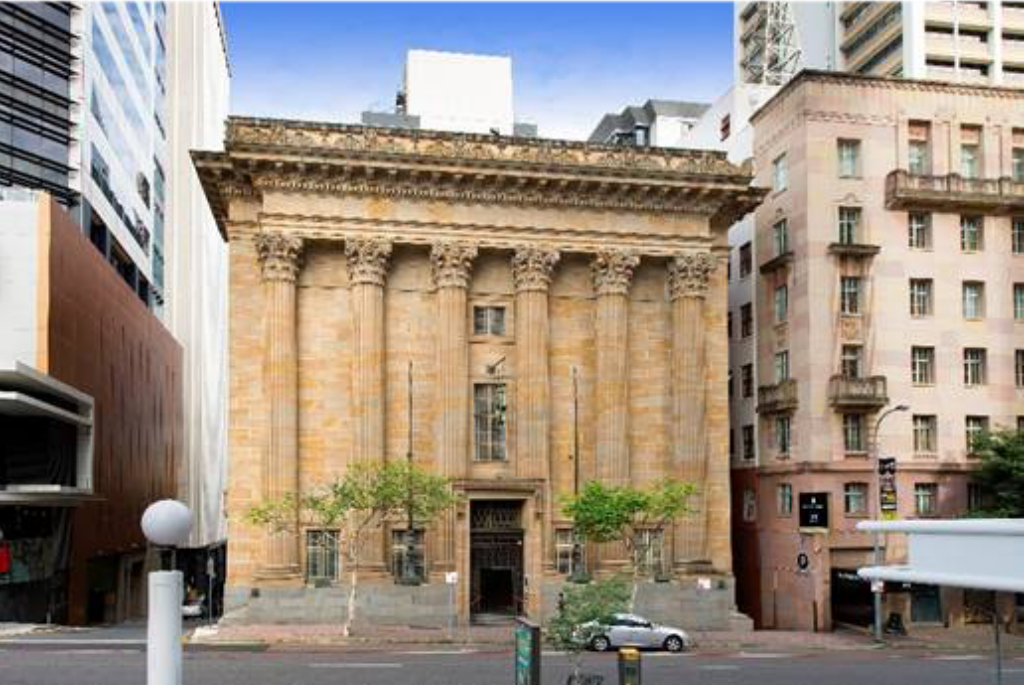 Stunning juxtaposition of the Masonic Temple tucked in between modern buildings on Ann Street, Brisbane.

Since that day, the hall has been the centre of Masonic activity in Queensland; its stunning Classical Revival facade sits in striking juxtaposition to high rise office blocks and is in companionable proximity to The Shrine of Remembrance in Anzac Square.

Both are monuments dedicated to the Eternal Flame of the memory of those who served and died.

The MMC Urn of Remembrance and the ANZAC Square Urn of the Eternal Flame are of similar size, are placed in a circle of Tuscan columns making two points within a circle with the two points (urns) the same distance from the edge of Ann St. It is also worth noting that the MMC, ANZAC Square, and the Brisbane City Hall were all built at the same time, are all Classic Revival Architecture (Masonic architects and builders) and they were all opened in December 1930.

The Urns were dedicated by the Queensland Governor, MW Brother Sir John Goodwin, GM 1931, in 1932. 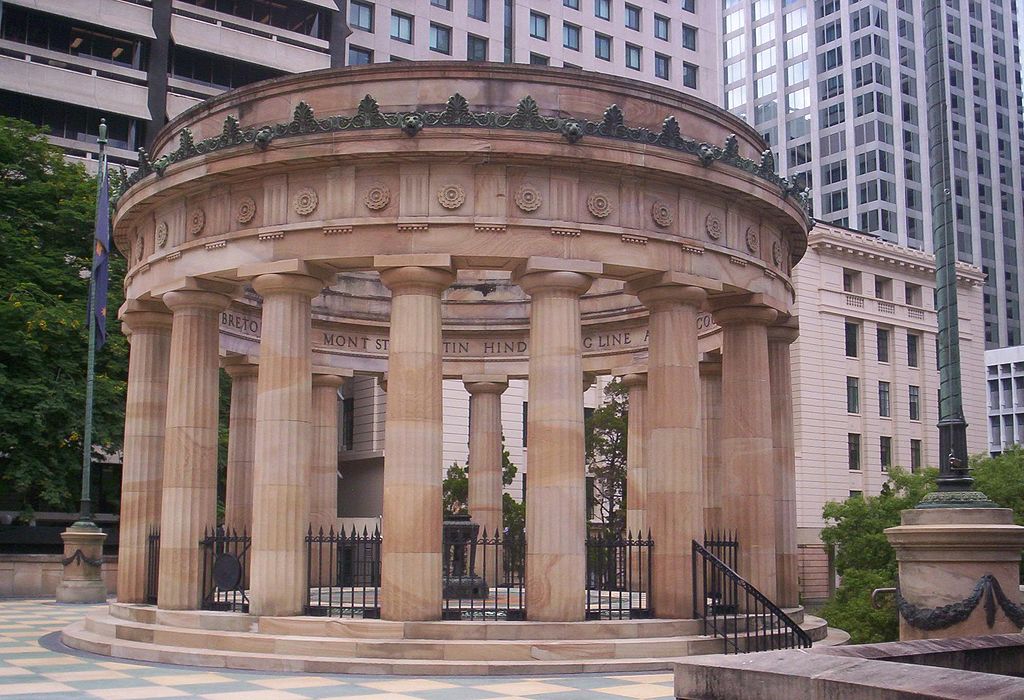 As you approach the Temple, you are faced with six giant sandstone Corinthian columns, five feet in diameter and supporting a richly decorated entablature and pediment.

Between these columns are leadlight windows and the entrance bearing heavily studded bronze doors.

The base of the building is grey granite and there you will find the foundation stone laid on Anzac Day 1928.

Beyond the bronze doors in the centre of the ground floor is a circular vestibule, the Hall of Remembrance.

Mounted on an imposing block of black marble is the Urn of Remembrance, surrounded by eight Tuscan columns in a circle bordering a mosaic in the shape of a star. 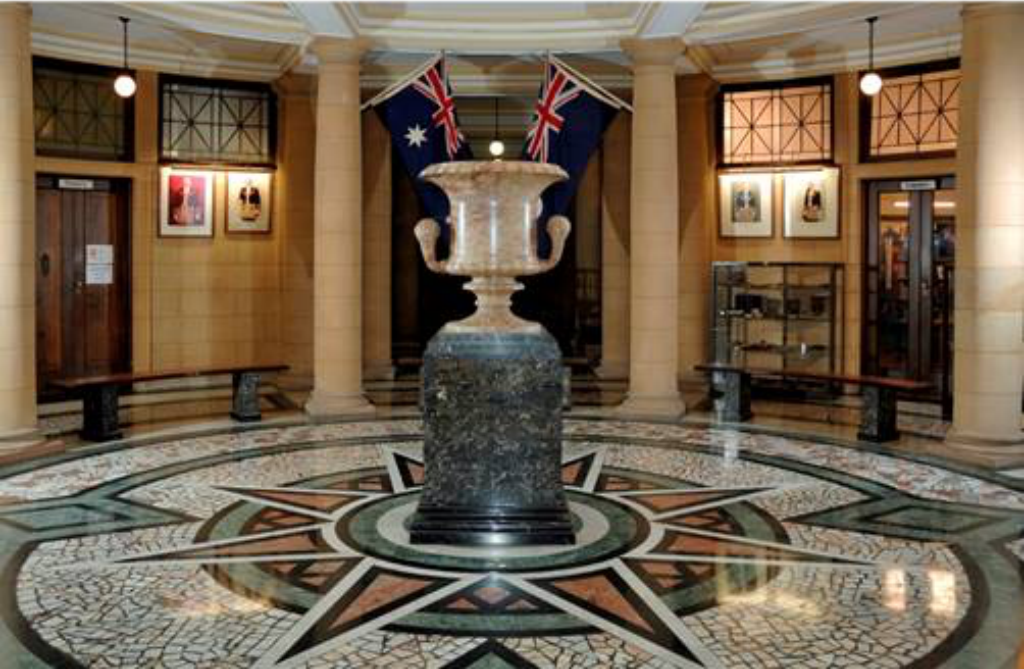 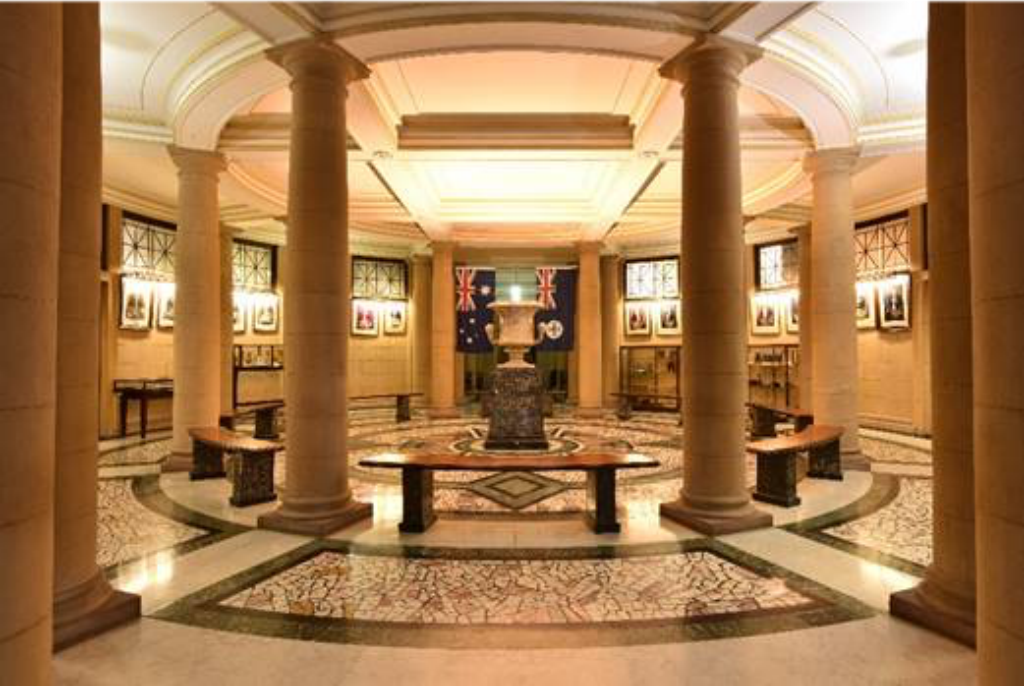 The Hall of Remembrance – The building is dedicated to Freemasons who gave their lives in WWI; the Urn is a war memorial used on ANZAC Day

The dedication of the Centre and the use of the Hall of Remembrance and the Memorial Urn on ANZAC Day is traced back to three veterans – W. Bros Lieutenant Colonel A. Christie CBE KStJ, Sergeant J. W. McFarlane and Warrant Officer E. Halstead, who were travelling back from a lodge meeting in Wynumm in October of 1921.

They talked about the possibility of having a dedicated lodge for veterans in the Queensland area and so AIF Memorial Lodge No. 289 was subsequently consecrated on 14 August the following year.

For fifty years the lodge had around 150 members; it was mainly comprised of veterans, but the member register did show that some members had no war service records.

The dedication of the Ann Street Temple to the First Australian Imperial Force (AIF) was the suggestion of the Master of AIF Memorial Lodge, and for the first ANZAC Day service they were supported by veterans of Remembrance Lodge wearing uniform and Masonic aprons. [2]

From that day forth, the AIF Memorial Lodge has been responsible for the planning and conduct of the annual service in honour of the brave men of the 1st AIF, and all Australians and New Zealanders ‘who served and died in all wars, conflicts, and peacekeeping operations’ and ‘contribution and suffering of all those who have served’. [3]

Part of this beautiful ceremony involves a parade of the vacant chair carrying the MM apron of the famous aviator, brother Sir Charles Kingsford Smith. 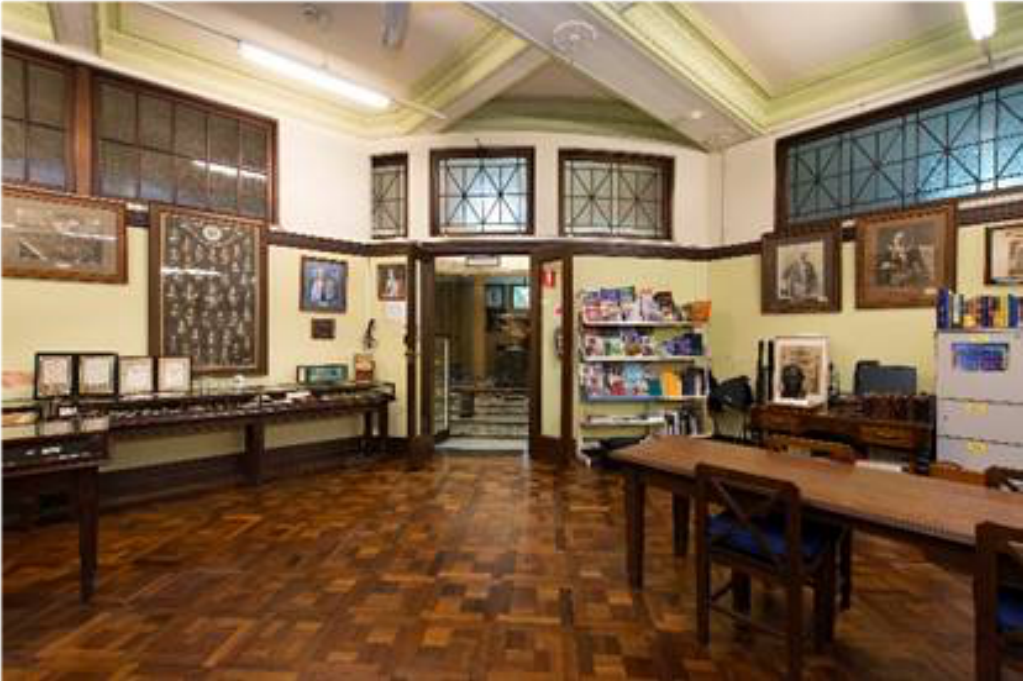 Offices and the library and museum open off the circular vestibule

On the third floor the space is mostly taken up by the splendid Grand Hall, described as the ‘largest and finest of its kind in Australia’ by the Architecture and Building Journal (February 1928).

The large symmetrical room has a vaulted coffered ceiling and seating stepped around the walls facing the centre.

The Grand Hall – An incredible space used by Freemasons for their ceremonies. It features furniture created on site made of Queensland timbers, symbolic decor and gold-leaf embellishments. The hall underwent a renovation in the late 1900s (UGLQ)

Although the two dedicated Masonic Memorial buildings are over ten thousand miles apart, their solemn meaning is inseparable.

The Centenary of the Armistice may now have passed but these permanent memorials will forever remind those who enter them of the ultimate sacrifice our forebears made to allow us to live in relative peace.

Long may it continue and may all their names ‘liveth for evermore’.

Tours of the Masonic Memorial Centre are available at various times of the year – please check the website for information
www.uglq.org.au

All images (unless otherwise stated) courtesy and copyright of UGLQ

This article, originally titled ‘Focus on Freemasonry in Queensland and the History of The Masonic Memorial Centre, Brisbane’, appeared in The Square (March 2019, vol. 45, no. 1)

In honour of ANZAC Day on 25 April - we look at one of the two specifically dedicated Masonic Memorials in the world, and how Freemasons in Australia and New Zealand continue to honour those who have made the ultimate sacrifice.

A sneak look inside Freimaurermuseum in Germany