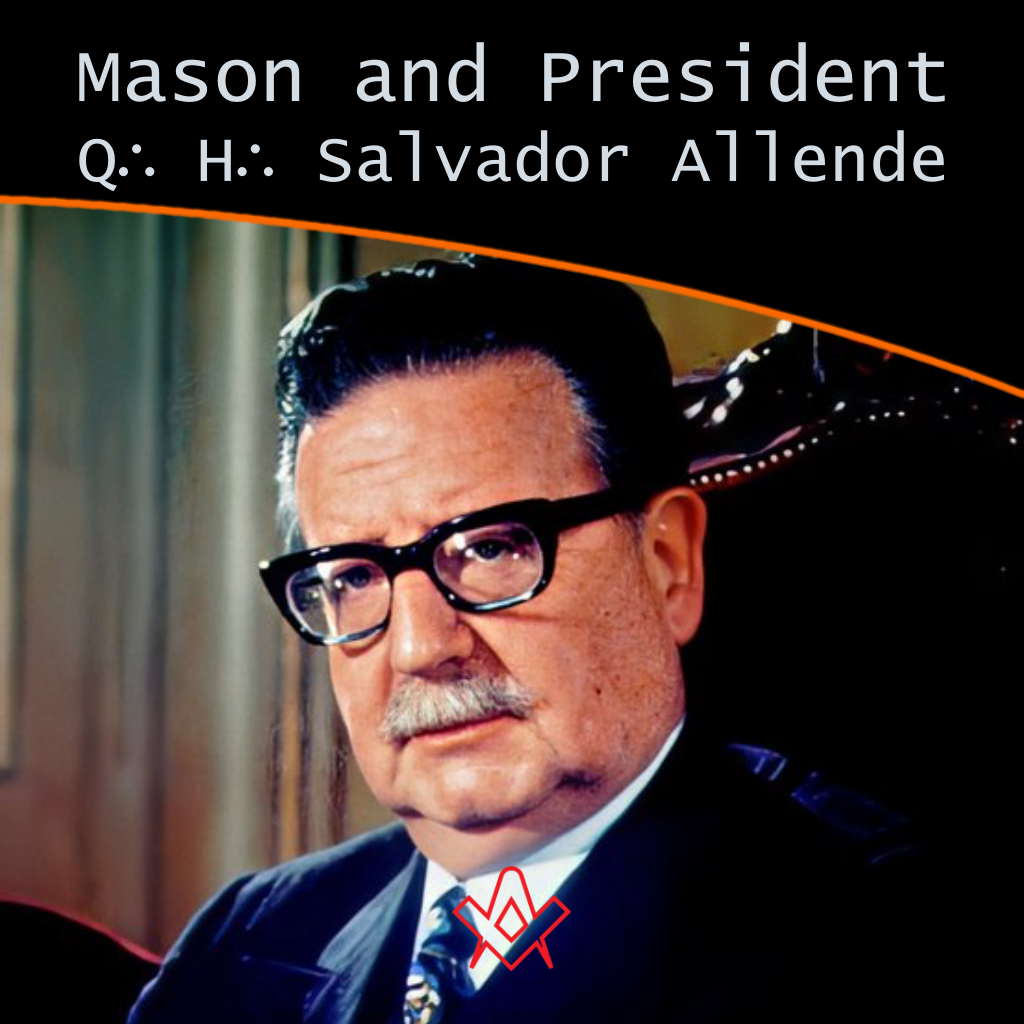 If there is a Freemason and a President worth remembering in the history of Chile, that man is the Q∴ H∴ President Salvador Allende Gossens.

The profane world and especially Freemasonry must remember and learn from the historical legacy of the great men and women who have passed under the heavenly vault.

dignity does not consist in having honours, but in deserving them

His ancestors, of Basque origin, arrived in Chile during the 17th century.

A good patriot, Allende, once he finished his secondary studies, performed military service for one year in the Tacna Lancers Regiment of the Chilean Army.

In 1926, he began his medical studies at the University of Chile, graduating as a surgeon with the thesis Mental hygiene and delinquency.

In 1940, he married Hortensia Bussi Soto, a prominent Chilean teacher, librarian, and activist, who can be deservedly and worthily called ‘First Lady’.

From his studies at the University of Chile he stood out for his political participation, later a being a Deputy, Minister of Health, Senator of the Republic, and then reaching the Presidency of Chile in 1970.

The Q∴ H∴ Salvador Allende, was the son and grandson of a Mason.

His father Salvador Allende Castro was a Freemason, and his grandfather Ramón Allende Padín, reached the high position of Serene Grand Master of the Grand Lodge of Chile.

On November 16, 1935, the profane Salvador Allende Gossens received the Masonic light by being initiated into the Resp∴ Progreso Lodge No. 4 of the city of Valparaíso. After its initiation Allende expressed:

When the blindfold fell from my eyes and I could see the swords directed at whoever saw the Masonic light for the first time and heard the words of the Venerable Master, I could understand that this was an expression of deep and deep solidarity, to make the initiate present that his brothers would be ready to come to his aid if the case required it.

Later Allende had to move to the city of Santiago, joining the Resp∴ on 8 November 1940. And then Hiram Lodge No. 65, where he reached the degree of Master Mason; he belonged to said lodge until the day of his death.

The Q∴ H∴ Allende, consistent as a Freemason, tried to transfer the principles and values of Masonic doctrine to profane society through his political life, so much so that once he assumed the Presidency of the Republic of Chile, he sacrificed his own life, fighting for the dignity and for giving light to the Chilean people.

But betrayal, typical of human beings of low morality, haunted the Q∴ H∴ President Allende, and like Grand Master Hiram Abif, was a victim of the Juwes – Jubela, Jubelo and Jubelum – the murderers of the man initiated into the light and the truth.

So, the right Q∴ H∴ Allende received the first blow with the rule, being assassinated in the name of a pseudo law and a false political order imposed by North American imperialism and materialized by the CIA, in complicity with the Chilean oligarchy that sold his dignity for a few dollars, as did Judas.

He then received a second hit with the crowbar, symbolizing the prejudices and beliefs of an anti-Masonic Catholic Church plotting in the shadows to overthrow President Mason.

Finally, he is finished off with a third blow with the hammer; upon being betrayed by a great majority of profane society that cowardly surrenders its dignity to the murderers.

The traitorous brother Augusto Pinochet Ugarte, sold like Judas to his Mason brother President Salvador Allende, who considered Augusto Pinochet a military man loyal to his government, which is why when the Q∴ H∴ Allende reaches the presidency of Chile, he appointed his Q∴ H∴ Augusto Pinochet Commander-in-Chief of the Chilean Army, without thinking that he would betray him by murdering him.

The traitor, the genocidal Augusto Pinochet who symbolizes and embodies the Juwes in himself, was initiated into Freemasonry on 28 May 1941, in the Resp∴ Victoria Lodge No. 15, at the age of 25, when he held the rank of army captain.

Pinochet was initiated into Freemasonry by his father-in-law, the Mason Osvaldo Hiriart Corvalán, who in turn had been initiated into the Resp∴ Lodge Duty and Evidence No. 7 of Santiago de Chile.

Augusto Pinochet, lacking the intellectual and moral level to understand the meaning, symbolism, and purpose of Freemasonry, was forced to withdraw from the Masonic Order, and an attempt was made to give him a dignified exit by granting him a Mandatory Retirement Letter for reasons of non-attendance and non-payment.

A letter was issued by the Council of the Lodge dated 24 October 1942.

The Q∴ H∴ President Salvador Allende was assassinated during the military coup on 11 September 1973, at the age of 65, although some versions try to muddy this Masonic figure by saying that Brother Allende committed suicide by shooting himself in the head when he was defeated.

The truth is that the Q∴ H∴ Allende was smart enough, brave, and consistent with his Masonic principles and values to take his own life before the traitors, the Juwes.

Today, the legacy of brother President Salvador Allende is immeasurable both in the profane world and in the Masonic world.

In fact, after the assassination there has not existed in the Chilean secular world a politician or a President of the Republic at the moral and intellectual height of President Allende; and in Chilean Freemasonry, there has not existed nor does there exist a man who possesses the dignity, the intellectuality, and the moral integrity of the Q∴ H∴ President Salvador Allende Gossens, who already decorates the Eternal East.

Here are the last words of the Q∴ H∴ President Salvador Allende*, moments before being assassinated:

Surely this will be the last opportunity for me to address you. The Air Force has bombed the towers of Radio Portales and Radio Corporación.My words do not have bitterness but disappointment. May they be a moral punishment for those who have betrayed their oath: soldiers of Chile, titular commanders in chief, Admiral Merino, who has designated himself Commander of the Navy, and Mr. Mendoza, the despicable general who only yesterday pledged his fidelity and loyalty to the Government, and who also has appointed himself Chief of the Carabineros [national police].

Given these facts, the only thing left for me is to say to workers: I am not going to resign!

Placed in a historic transition, I will pay for loyalty to the people with my life. And I say to them that I am certain that the seed which we have planted in the good conscience of thousands and thousands of Chileans will not be shriveled forever.

They have strength and will be able to dominate us, but social processes can be arrested neither by crime nor force. History is ours, and people make history.

Workers of my country: I want to thank you for the loyalty that you always had, the confidence that you deposited in a man who was only an interpreter of great yearnings for justice, who gave his word that he would respect the Constitution and the law and did just that. At this definitive moment, the last moment when I can address you, I wish you to take advantage of the lesson: foreign capital, imperialism, together with the reaction, created the climate in which the Armed Forces broke their tradition, the tradition taught by General Schneider and reaffirmed by Commander Araya, victims of the same social sector which will today be in their homes hoping, with foreign assistance, to retake power to continue defending their profits and their privileges.

I address, above all, the modest woman of our land, the campesina who believed in us, the worker who labored more, the mother who knew our concern for children. I address professionals of Chile, patriotic professionals, those who days ago continued working against the sedition sponsored by professional associations, class-based associations that also defended the advantages which a capitalist society grants to a few.

I address the youth, those who sang and gave us their joy and their spirit of struggle. I address the man of Chile, the worker, the farmer, the intellectual, those who will be persecuted, because in our country fascism has been already present for many hours — in terrorist attacks, blowing up the bridges, cutting the railroad tracks, destroying the oil and gas pipelines, in the face of the silence of those who had the obligation to protect them. They were committed. History will judge them.

Surely Radio Magallanes will be silenced, and the calm metal instrument of my voice will no longer reach you. It does not matter. You will continue hearing it. I will always be next to you. At least my memory will be that of a man of dignity who was loyal to [inaudible] the workers.

Workers of my country, I have faith in Chile and its destiny. Other men will overcome this dark and bitter moment when treason seeks to prevail. Go forward knowing that, sooner rather than later, the great avenues will open again where free men will walk to build a better society.

These are my last words, and I am certain that my sacrifice will not be in vain, I am certain that, at the very least, it will be a moral lesson that will punish felony, cowardice, and treason.

This article was translated from the original Spanish