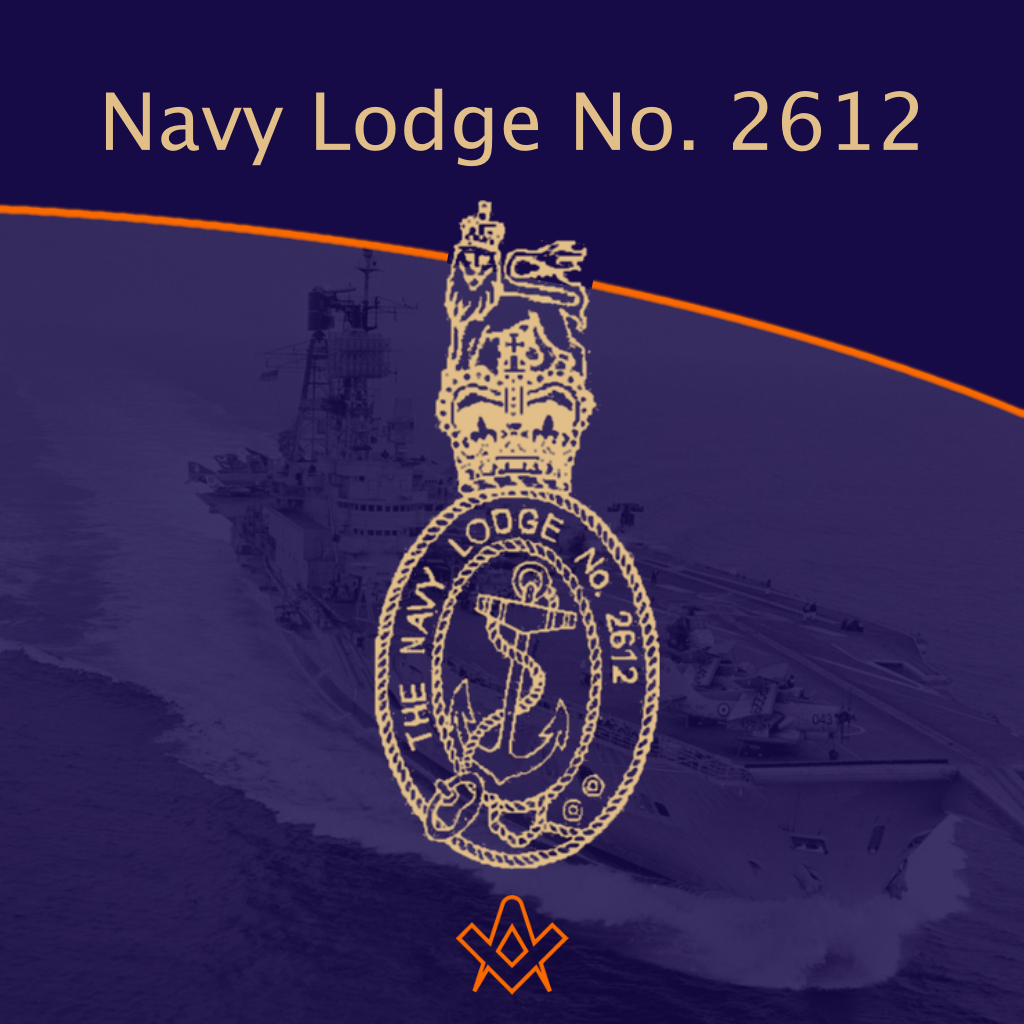 A short, but fascinating history of Navy Lodge No. 2612 – a lodge fit for princes and kings – ‘past membership has included four monarchs, HRH Prince George (father of our present Grand Master), the Duke of Edinburgh, three winners of the Victoria Cross, Shackleton, Scott of the Antarctic, Louis Greig and more generals and admirals than I care to count’.

Admiral Sir Albert Hastings Markham was the prime inspiration behind the foundation of Navy Lodge.

He was a member of Phoenix Lodge No. 257, meeting (still) in Portsmouth and together with other naval brethren who were living and working in London found it impossible to travel to and from the south coast to attend meetings.

There were two other naval lodges in existence at the time: Royal Naval No. 59, meeting in London, which had all but lost its naval connections, and Royal Navy Lodge No. 429, meeting in Ramsgate, Kent. Both are still going strong.

The consecration of the lodge was reported in The Times newspaper of 13 June 1896:

A new Lodge of Freemasons was consecrated last night at Freemasons’ Hall and the Prince of Wales declared to be installed as its first Worshipful Master.

The Lodge has been established especially for the convenience of officers of the Royal Navy and Royal Marines and officials of the Admiralty.

It bears the title of the Navy Lodge and is numbered 2612 on the roll of the Grand Lodge of England.

The Master’s chair was occupied initially by RW Bro Edward Letchworth, Grand Secretary, who opened the lodge in the three degrees before the procession of the MW the Pro Grand Master entered the lodge.

The new lodge was duly consecrated in solemn form and according to ancient custom. 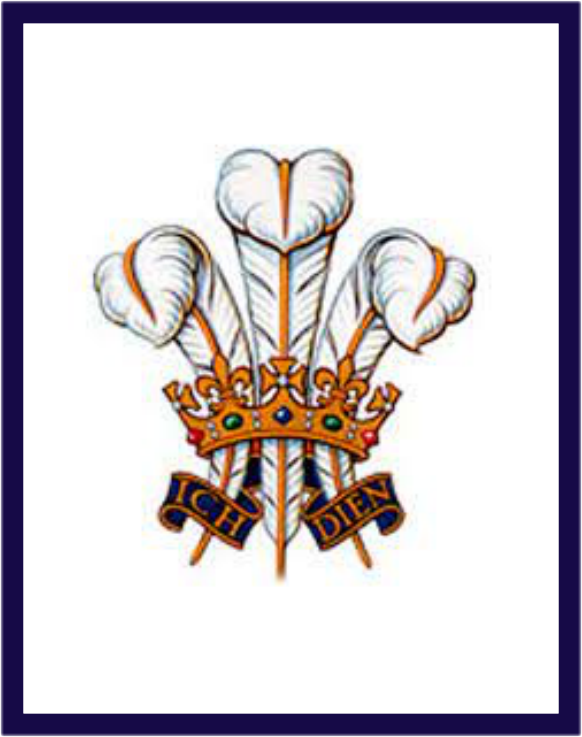 After the lodge had been closed, the brethren adjourned to the Freemasons’ Tavern, the chair being taken by the Worshipful Deputy Master, with twenty-two other Grand Officers and thirty-four of the sixty-six Founding Members being present.

The first regular meeting of Navy Lodge was held less than two weeks later, on 25 June 1896, when Admiral of the Fleet Sir Henry Keppel, a Founder, was elected an Honorary Member at the ripe old age of 87.

A ballot for five joining members proved in favour, the senior one being Lieutenant Lionel Halsey, which was just as well seeing as his esteemed father, Sir Frederick Halsey, Provincial Grand Master of Hertfordshire, was present as a guest.

In those days business was, to say the least, brisk. As the maximum number of candidates that could be initiated at any one time was restricted to five, a dispensation was sought and received so that, in addition to five joining members, they were able that evening to elect and initiate seven candidates. 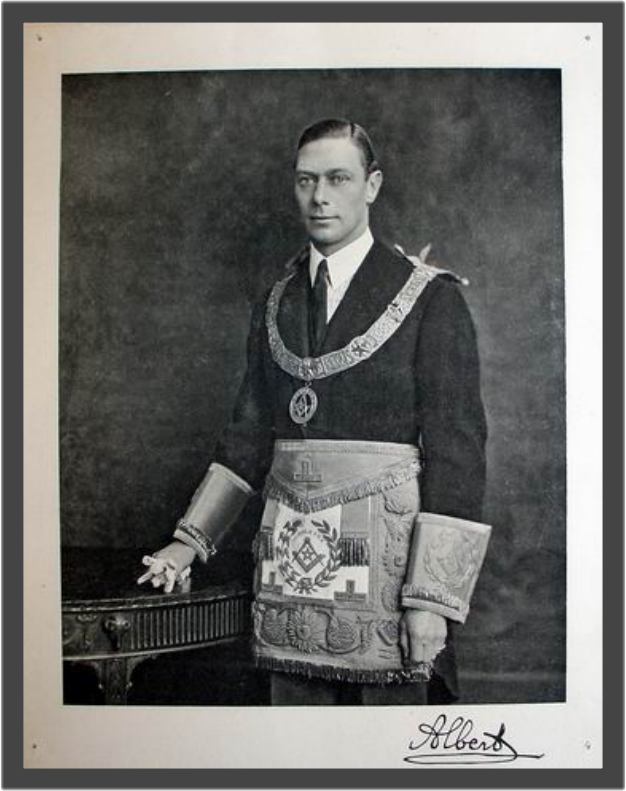 He always stated that Freemasonry had been one of the strongest influences in his life and in response to the toast to the initiate said:

I have always wished to become a Freemason, but owing to the war I have had no opportunity before this of joining the Craft.

All my life I have heard about Freemasonry, and though there has always been a certain mystery attached to it, I have learned that Freemasons in this country have been a great help to the poor and friendless and have been notable for their efforts on behalf of children.

One can see by the great Masonic Institutions and schools how successful their work has been in this cause, and I like to think that in the future I shall be associated in their great work. 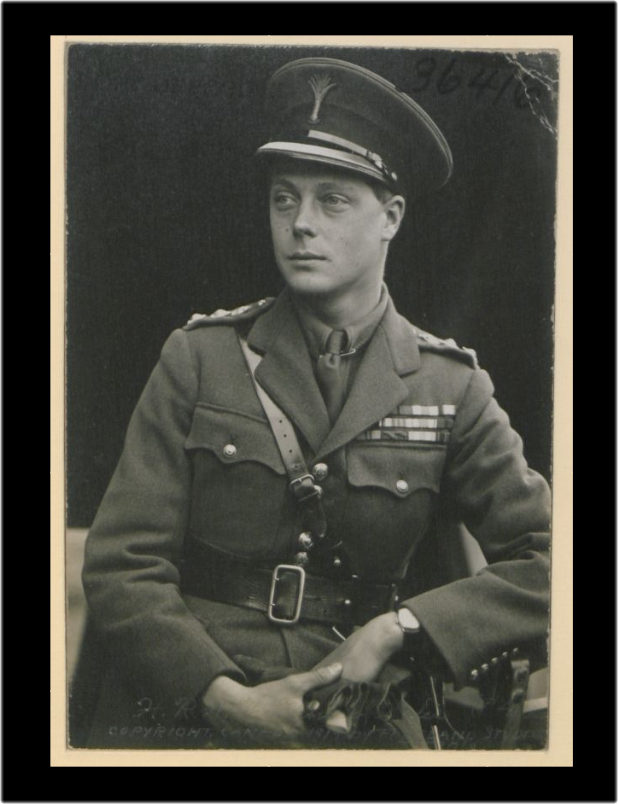 His elder brother, HRH The Prince of Wales (later HM King Edward VIII) was elected a joining member on 5 March 1920.

Being a Grenadier, he had been initiated into Household Brigade Lodge No. 2614 and was a member of several other lodges.

At the time of his accession to the throne he was Worshipful Master of Friendship and Harmony Lodge No. 1616 and continued until the end of his term; I believe this to be the only time a reigning monarch has ever been the presiding Master of a lodge.

He was subsequently appointed Past Grand Master.

After broadcasting to the nation, he was driven to Portsmouth where he boarded HMS Fury and departed for Bordeaux and exile in France.

He was granted the title Duke of Windsor and married Mrs Simpson in a private ceremony at Chateau de Candé, Monts. During the Second World War he escaped from Paris to Lisbon and was appointed Governor of the Bahamas. 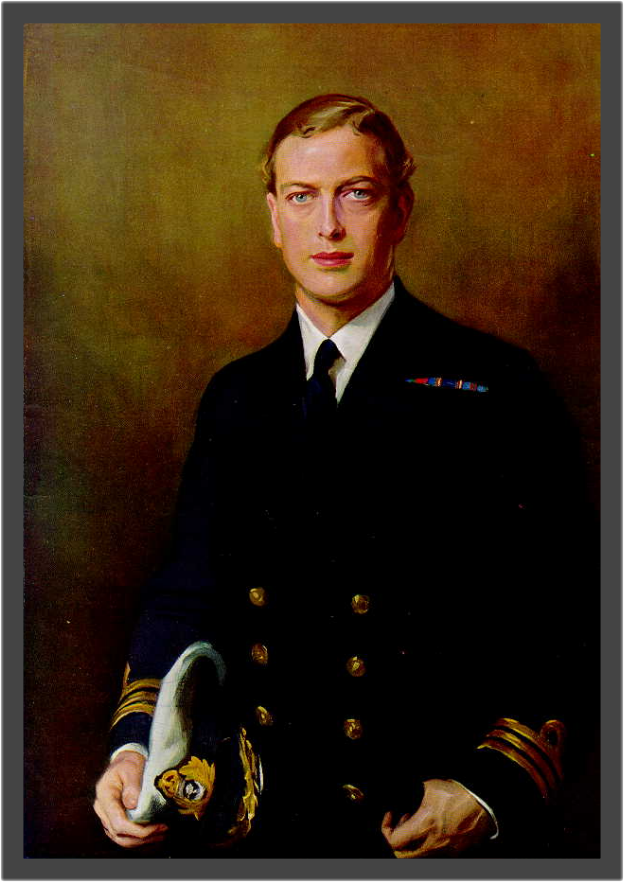 Prince George, by then Duke of Kent, was installed as Grand Master at an especial meeting of Grand Lodge by his brother, now HM King George VI on 19 July 1939.

Although retired, Prince George resumed active service at the start of World War II in the rank of Rear-Admiral, briefly serving in the Intelligence Division of the Admiralty. In 1940, he transferred to the Royal Air Force and temporarily relinquished his rank as Air Vice-Marshal to take the post of Staff Officer in the RAF Training Command in the rank of Air Commodore.

Sadly, he was killed on 25 August 1942, when the S-25 Sunderland Mk III flying boat in which he was flying crashed at Eagle’s Rock near Borgue Ruadh, Caithness, reputedly on a ‘special mission’ to Iceland.

By 1934, all three brothers were not only all members of Navy Lodge but were also serving simultaneously as Provincial Grand Masters: Prince of Wales (Surrey), Prince Albert (Middlesex) and Duke of Kent (Wiltshire). 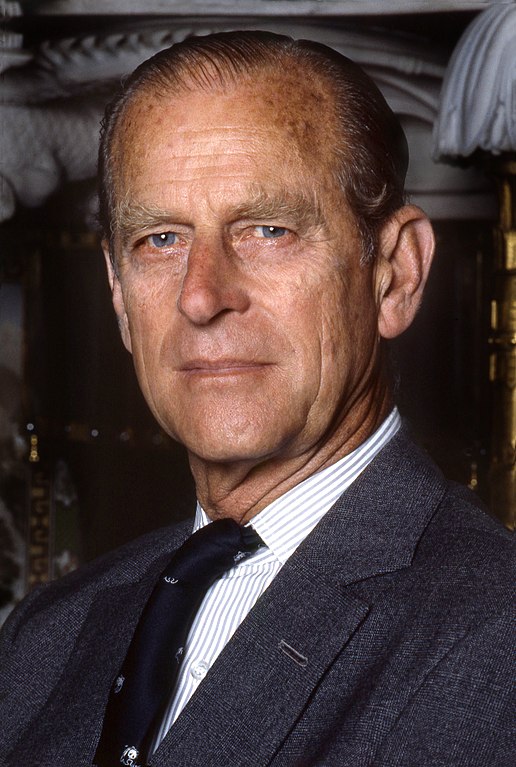 HRH The Prince Philip was born Prince of Greece and Denmark on 10 June 1921, at Villa Mon Repos on the island of Corfu. He saw active service throughout the second World War and while serving in HMS Valiant during the Battle of Crete was mentioned in despatches.

On 9 July 1947, his engagement to Princess Elizabeth was announced and the marriage took place in Westminster Abbey on 20 November that year.

Shortly before the wedding, he was created Duke of Edinburgh, Earl of Merioneth and Baron Greenwich with the style of His Royal Highness and appointed a Knight of the Order of the Garter by HM King George VI.

After the wedding, he continued his naval career; he was promoted Lt Commander on 16 July 1950 and given command of the frigate HMS Magpie.

Commander Prince Philip was duly initiated into Navy Lodge on 5 December 1952, at an Emergency Meeting held in Freemasons’ Hall when no private guests were allowed.

There were fifty-two lodge members present and just twelve official guests, including the MW Grand Master, The Earl of Scarbrough.

Following rather rapid promotion, now Admiral-of-the-Fleet Prince Philip was passed on 6 March, and raised on 4 May 1953, with the MW Grand Master (again) and MW Grand Master of Scotland in attendance. 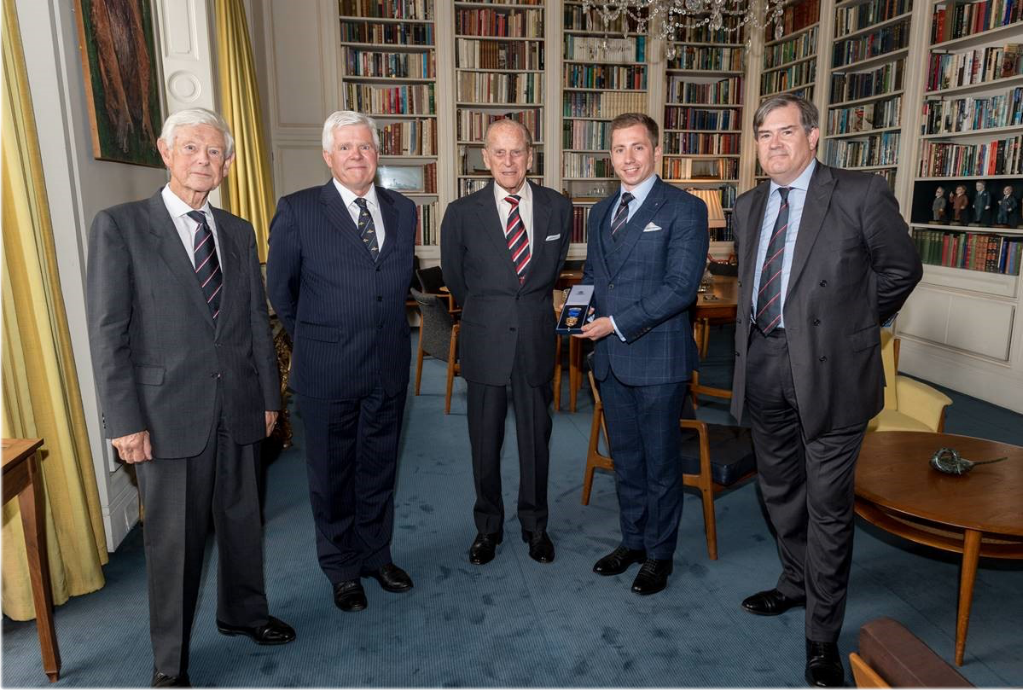 On the Tercentenary of Grand Lodge in 2017, Navy lodge presented HRH The Prince Philip with a solid gold Tercentenary jewel.

In order to mark the Tercentenary of Grand Lodge in 2017 the lodge presented him with a solid gold Tercentenary jewel.

The Duke kindly received a small Navy Lodge party in his private library at Buckingham Palace, comprising the WM, Secretary, our most senior and junior member.

The date? Most appropriately, it was on 31 May – the anniversary of the Battle of Jutland – one synonymous with so many Navy Lodge members, not least his late father-in-law.

Though he had not played an active role in the lodge, he remained a subscribing member throughout the remainder of his long life.

The lodge proudly lists among its former members:

three winners of the Victoria Cross, Shackleton, Scott, McKenzie-Grieve and many other notables, too numerous to mention.

The lodge enjoys a few special traditions; the deaths of Royal members are announced before the Minutes, while other Brethren are remembered after them.

Dress regalia is very rarely worn and reserved solely for very special occasions such as the Centenary meeting.

Since 1929, when HRH The Prince of Wales, the Duke of York, and Prince George were all members of the lodge, the national anthem has been played but not sung at the end of our meetings.

On 12 May 1911, the Worshipful Master, Admiral Sir Reginald Tupper, proposed that the lodge should have its own closing hymn.

He suggested a modified version of ‘Eternal Father’, sung to the tune Melita, which was agreed to by the brethren and is still being sung to this day.

In 1965, the Board of General Purposes was concerned about the quantity and quality of music in lodge ceremonies.

Navy Lodge wrote for leave to continue using our version of ‘Eternal Father’ to which the Grand Secretary’s (Sir James Stubbs) reply, dated 19 August, was that it was not forbidden, but it could not be said to have the approval of the BGP.

In October 1993, Navy Lodge was invited to become a member of the Circuit of Service Lodges, which now comprises some forty-two lodges all of whom have a predominance of servicemen or veterans as members and an identifiable military ethos and culture that defines their meetings.

The Circuit promotes inter-visiting and has a traveling gavel donated by Navy Lodge, being made from a section of the stern taff-rail of HMY Britannia, which during the course of her life travelled in excess of one million miles.

The lodge celebrated its centenary on 14 June 1996, at an Emergency meeting held in Lodge Room 10 at Freemasons’ Hall, when 129 Brethren were present.

The lodge and its guests dined in the Edinburgh Suite of the New Connaught Rooms, and after the first toast of the evening, telegrams were read out from Bro HRH Prince Philip, The Duke of Edinburgh as well as HM Queen Elizabeth, The Queen Mother, who recalled:

I offer my warmest congratulations to all Brethren of the Navy Lodge No. 2612 on the occasion of its Centenary. I

remember well how pleased The King was to be able to attend your Jubilee Meeting in 1946 and I send you all my best wishes for peace and happiness in the years ahead.

This year marks our 125th anniversary, which we will celebrate in September, appropriately afloat aboard HQS Wellington on the Thames. 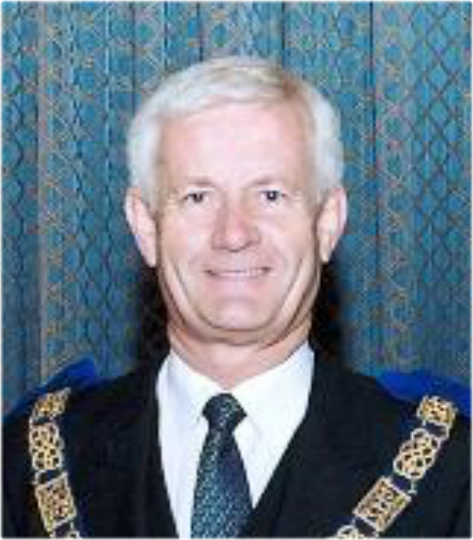 A Lewis, [he] was initiated into Navy Lodge in 1989 and served as Master while appointed to a NATO post in Virginia, USA, remaining a life member of Princess Anne RA Chapter #1607. 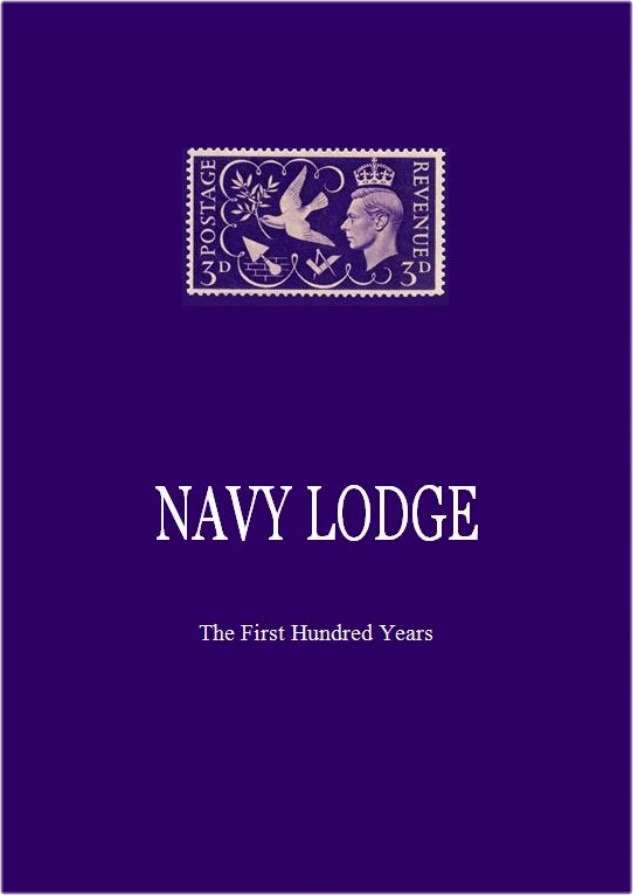 The full story is available in a 140-page colour paperback, the cost if which is just £10 plus P&P. All profits go toward the purchase of sailing boats for the Sea Cadets. Full details are available from david@dmswain.uk